The Prince of Tides - Criterion Collection

When a filmmaker scores a major hit on a modest budget earning the film seven Oscar nominations, you'd figure their career behind the camera was assured. Oddly Barbra Streisand only made one more film after her big hit the romantic drama The Prince of Tides starring Nick Nolte in an Oscar-nominated performance with Streisand playing the romantic interest. Based on the Pat Conroy novel, the film relies on Nolte's natural charm and commanding screen presence while letting his softer sentimental side define the role as Streisand deftly manages a story of familial trauma and tragedy. The Criterion Collection delivers an impressive Blu-ray with a video transfer sourced from a new restoration, a terrific audio mix, and a great audio commentary. Recommended

Out of work high school English teacher and football coach Tom Wingo is aimless and in need of direction as he slowly drifts into gruff cynicism. Married to Sally (Blythe Danner), they raise their three girls as right as they can away from the nightmare of Tom's childhood but their marriage is on the rocks. When Tom learns his twin sister Savannah (Melinda Dillon) has tried to kill herself again, Tom flies to New York to speak to her psychiatrist Doctor Susan Lowenstein (Barbra Streisand) to provide a family history to help treat his sister. As Tom divulges Savanah's troubles he soon remembers the dark corners of his own past. While Susan and Tom continue to work together, they draw closer into an unexpected romance that can't last. 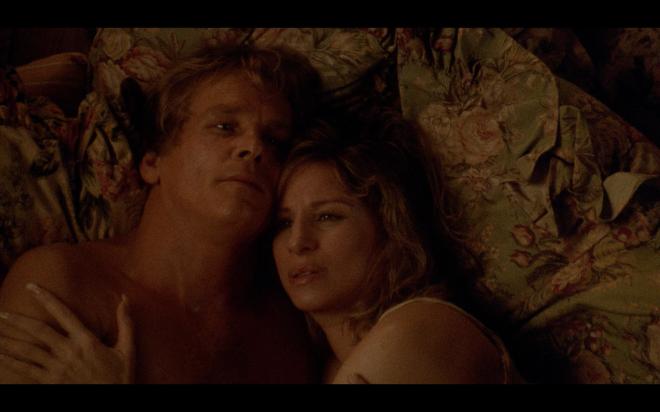 I've only ever read portions of Pat Conroy's novel. As a younger lad of green-eyed optimism, I was reading far above my age level with horror icons Stephen King, Barker, and classics from Stoker, and Shelley by the time I was 11. I'd tried tomes like Robert Ludlum's The Holcroft Covenant but couldn't wrap my head around the plot threads. When I picked up Conroy's novel I figured I'd give it a try since my mother read it and it was a big thing because of the movie. Well… I didn't finish it. Not because it was too complicated, not because of the romance, not because it wasn't loaded with blood, guts, gore, and other viscera that I would rather have read. It was child abuse in detail. When the rape attack started I bowed out. It was too much. So it's on that end that I want to tip my hat to Director, Star, and by all accounts uncredited Screenwriter Barbra Streisand. She managed to not shy away from this disturbing and rough material for her adaptation but didn't inappropriately wallow in it either.

From what I remember of the novel it was a sprawling thick son of a bitch that weighed down my bookbag like a brick. As a cinematic event, there's enough material there that this could have been a respectable 6-hour HBO mini-series event instead of a two-hour film. In fact, that may have helped things a little. There are a number of side characters who come and go within this film that aren't necessarily essential to the plot, but they play an impact all the same. As we learn who these people are we could have used a little more rumination time to understand how their presence impacts Tom and his journey. A fleeting flashback in a film full of fleeting flashbacks is a tough measure to fully appreciate.

But these are mere nitpicks really. The glue that holds this movie together isn't just the solid screenplay adaptation or Streisand's wise editing eye for some of the more gut-wrenching material, it's the performances. Everyone is in peak form here. Kate Nelligan as Tom and Savanah's image-conscious social-climbing mother is amazing. She's long been an actress I've admired in everything I see her in; she's in bad movies but she's never bad in them. It's amazing to me this is the only Oscar nomination she's ever received. Jeroen Krabbé is given so little to do but he makes an impact immediately. Brad Sullivan as the abusive father even manages a few moments to shine. His final scene of the film is a touching moment as if he were apologizing for how he treated his kids - but not in words. He doesn't have those. But he can show his granddaughters how to shrimp. It's a genuinely tender moment that I don't recall being in the book.

But the star of this show isn't the side cast, it's not even Barbra Streisand really, it's Nick Nolte. Long before this film and pretty much ever since, Nolte has made a name for himself playing tough guys with loud voices that can command a room but still be charming as hell. He leans into that quality as Tom, but he also finds the softer innocent side within himself allowing him to appear emotionally exposed and vulnerable. The more these scenes stack up the more believable the connection between his Tom and Streisand's Lowenstein becomes. By the time they actually become romantically entangled it's practically an afterthought and the movie is better for it. In lesser hands, the romance would have hit far too early and felt cheap.

While I can heap praise upon praise for this film, I don't think it's perfect. It's damn good, it earned its accolades, but I do have some quibbles. I've mentioned the film's swift movement through relevant flashbacks - that's my primary sticking point. My next issue is the film's length. Even at 2 hours and 12-minutes, it's just too short to satisfyingly wrap things up. I understand that's how things happen in the book, but we need maybe an extra 15-minutes of time with Tom and Susan not necessarily being lovers between the sheets but enjoying life together. As things speed along we quickly understand that this isn't a romance to last. In order for us to feel the tragedy of this brief encounter, we need the illusion that one or both of them would blow up their lives to be with each other. That never happens here. It apparently doesn't happen in the book either - again I never finished it - but for this story, it needs that beat.

Now that The Prince of Tides is a part of The Criterion Collection again now on Blu-ray - it can once again be placed alongside its award season rival The Silence of the Lambs. These two films went toe-to-toe punching for the big wins. While I'll always defend Lambs as the superior film - let's be honest here it just is - The Prince of Tides is no less appreciable. It's just bad timing really. Streisand was such a strong filmmaking presence she disserved that recognition. Watching this and Yentle - you can see that Streisand was great behind the camera. It's a shame that a silly comedy like The Mirror Has Two Faces is the last film Barbra directed well over 20 years ago now. Rumors have circulated for a number of years for a return to directing but nothing has materialized yet. I'd be interested to see what she could bring to the screen today.

Sourced from a new 4K scan supervised and approved by Barbra Streisand, The Prince of Tides scores a winning 1080p 1.85:1 transfer. This was an extremely well-produced film with impressive production design and rich locations. As the film spans various eras from the 1950s and 1960s into the late 1980s, designs and styles change offering clear distinctions from Tom's southern past to his present life in bustling New York. Throughout, the transfer allows for a full range of appreciable details to populate the screen with a natural film grain structure that doesn't show any signs of being tinkered with. Colors skew towards favoring golden yellows, but primaries red and blue maintain a strong presence. Black levels are equally impressive with pitch-black inky presence giving the image a terrific sense of depth. The source elements are in terrific shape without any sign of age-related wear and tear. This is truly another splendid transfer where one would hope Criterion would enter the UHD fray. A native 4K transfer with HDR is the only way this movie will look any better on home video.

Forgoing a new surround mix, The Prince of Tides sticks to basics with an effective and impressively well balanced DTS-HD MA 2.0 mix. As a conversational film - the dialog is never lost in the rich sound design. Even without a full surround presence, there is an appreciable sense of atmosphere with plenty of extra audio elements to set the busy New York setting or the languid North Carolina home Tom grew up in. Scoring by James Newton Howard is dramatic and present but doesn't overpower the mix. It hits the emotional swells with the dialog punching the core moments. The attack sequence during a thunderstorm allows for some well-balanced low tones to rumble in and add more auditory intensity to the moment. Free of any kind of hiss or age-related issues, this is a terrific audio mix that captures the needs of this film.

In true Criterion Collection fashion, The Prince of Tides arrives with a solid bonus features package. They're dated, repackaged materials from the old laserdisc but still interesting looks. The most valuable of the bunch is the Streisand audio commentary that was originally recorded in 1991 and then updated in 2019. This is an odd note and it stems from the recalled Criterion Laserdisc that sported other commentary tracks that Streisand apparently didn't approve. I don't know what's on those commentaries as the few copies that made it out into the world are quite rare and hard to come by. This updated commentary is still very good and informative, although you can hear the difference in pitch and overall audio quality when 1991 and 2019 Streisand are speaking. The rest of the material is archival behind the scenes and old interviews.

The Prince of Tides may not be everyone's sort of movie - I'm not even sure it's my own sort of movie - but it's a perfectly well-made film under the direction of Barbra Streisand. Nick Nolte commands this ship with one of the best performances of his career. Just when the material is about to drift into schmaltz, Streisand's watchful behind the scenes position keeps the emotional melodrama on course.

The Criterion Collection delivers a first-rate Blu-ray of The Prince of Tides for fans. Featuring an exceptional video transfer, excellent audio mix, the only slip is the bonus features package which has the one really good audio commentary but the rest of the archival features is pretty forgettable. If you love this movie, you should be very happy with this release. Recommended.