Spike Lee turns his biting satirical eye towards the entertainment industry and corporate portrayal of African American people in Bamboozled. Starring Daymon Wayans, Savion Glover, Tommy Davidson, Jada Pinkett-Smith, and Michael Rapaport - the film isn't just a takedown of how one demographic is marginalized and pandered to in the media - but all demographics. The film is often horrifyingly hilarious but when the film hits a target the point sticks to the heart of the matter and makes you question the machine that churned out your entertainment. The Criterion Collection delivers Bamboozled to Blu-ray in terrific form preserving the film's unique cinematography while offering notable upgrades over previous home video releases in addition to an impressive package of bonus features. This barbed satire was largely overlooked upon theatrical release but it's become an essential piece of filmmaking and is Highly Recommended.

Pierre Delacroix (Damon Wayans) is on his heels as a producer at Consolidated Network Systems. Late for meetings he wasn't informed about - his boss Tom Dunwitty (Michael Rapaport) has him in his crosshairs for not creating content that's "black enough" fully believing he knows what black audiences want to see on T.V. better than an actual black man. Tasked with creating a hit show that'll draw black audiences or get fired, with his assistant Sloan (Jada Pinkett-Smith) Delacroix tag-teams two dancing street hustlers Manray (Savion Glover) and Womack (Tommy Davidson) into joining the most stereotypical racist show ever created - "Mantan: The New Millennium Minstrel Show" - something so offensive CNS would have to fire Delacroix and break his contract. Only the show becomes the network's biggest hit and Delacroix's precious principles have become a bit hazy. 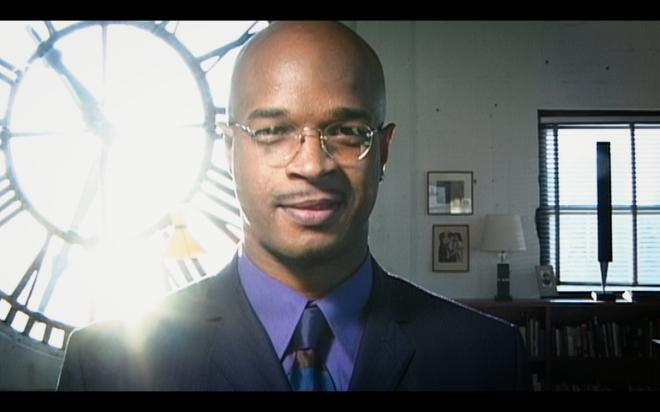 When Spike Lee has something to say - the man doesn't mince words. He doesn't hold back delicacies. He doesn't shy away from the fight. Bamboozled is Spike Lee's war on mainstream entertainment's depiction of black people and black culture. While some networks put out shows that appear diverse or for lack of a better term "woke" - they're actually pandering and often more insulting if they'd simply done nothing. Or the studio or network in question will make a token hire to say "Hey look! We did it, we conquered diversity!" At the same time, others try to work within the industry to genuinely portray a demographic accurately without stereotype but accidentally trip over their own shoes and end up feeding the problem. This isn't to say anything of the film's dead-on look at cultural appropriation from clothing styles to music.

Bamboozled is less interested in entertaining an audience than it is in forcing the viewer to reflect on their entertainment choices. Not only what they watch but consider who is actually making the content. It's through this lens you will have a fairly interesting experience with this film. Spike is inviting you to laugh, sure, but then somethings just aren't funny. What you think is funny or enlightening will depend on your own background and upbringing. It's why I find Michael Rapaport's Dunwitty so comedically maddening. His character is so over the top it's funny - until you realize you know people just like him. I knew someone who made the same arguments about black culture because he used to date an "African American woman." I know he meant well and was trying to empathize - but with the money he was born into there's no way he could ever truly relate.

Growing up in an affluent white community - that was frighteningly conservative at times - my exposure to "positive" African American culture was basically what you saw on Fresh Prince, Cosby, and Family Matters. Heaven forbid you saw Boyz 'N The Hood or dared to look at the Jungle Fever poster hanging up at the rental shop! Thankfully I discovered In Living Color all on my own and it didn't have to be shown to me. By the time rap music was even on my radar, it was so demonized that when I actually got to listen to an NWO album I didn't understand what the fuss was about. Red and blue bandanas were scrutinized and shunned for "gangster culture" the same way any kid that wore a black t-shirt or liked horror movies would be post-Columbine.

Looking back at the pearl-clutching of where I grew up is sometimes hilarious but also frustrating. I feel like Lee's point with Bamboozled comes down to culture is largely understood by the media we consume. The satirical edge slices when it begs the audience to laugh at material that is inherently offensive. The first time Manray and Womack hop to the stage in blackface, that audience reaction is as real as it gets. Laughing is a natural response to shock - the brain simply doesn't know what else to do. But they strain to hold back their laughter because they don't if they should laugh or not.  If the only exposure we have to other cultures are bleak news reports and soulless caricature we're not really learning or understanding, we're just feeding the echo-chamber. If you're going through a process of self-examination and reflection with recent events - this film is an essential conversation starter. Even if someone is inviting you to laugh - it's not always funny.

The Criterion Collection showcases Bamboozled to Blu-ray in a single-disc set. Pressed onto a Region A BD-50 disc, the disc is housed in Criterion's standard clear case with spine number: 1019. Also included is a booklet with images from the film, essays, and information about the transfer. The disc loads to a static image main menu with traditional navigation options.

Bamboozled is a cinematic oddity in that it's comprised of late 90s digital video camera and 16mm footage. Most of the film was shot on DV so it's natively locked in at standard definition where some key scenes and The New Millennium Minstrel Show were shot on 16mm. For this transfer Criterion went back to the original elements and crafted a new 2K master supervised by cinematographer Ellen Kuras and approved by Spike Lee. Considering source elements I'm actually really impressed with how this turned out. Obviously it's not a sparkly pristine image due to limitations, but there is a lot more detail present - especially in the DV segments than I'd expected. It gives me hope that Criterion might be able to work some kind of miracle for a movie like 28 Days Later. There are still the telltale softness, aliasing, and color distortion issues with that DV footage - but it's much better than I'd expected. With that - it's pretty damn obvious when the restored 16mm footage kicks in as it's vastly superior to anything the DV has to offer. All of a sudden details are robust, a constant grain structure, and colors come to life with vivid primaries. The way I'm scoring this is 3/5 for the video footage - 5/5 for the 16mm for a 4/5 average.

Bamboozled scores a strong DTS-HD MA 5.1 mix. For large sections of the film, the soundscape is pretty front and center. There just isn't much cause for an open dynamic surround presence. Much like the video transfer, when The New Millennium Minstrel Show kicks in and there are song and dance routines, the sound design of the movie opens up beautifully. The surround channels are fully engaged allowing for a rich auditory presence. Score by Tarence Blanchard is another moody and atmospheric effort that livens up the sound design whenever the film is being a bit more quiet and conversational. All in all, a great sound mix that lends itself well to this film.

The Criterion Collection brings Bamboozled to Blu-ray with a decent assortment of bonus features combining some new interviews with most of the archival materials from the original DVD release. As always the Spike Lee audio commentary is an essential listen. The Making of Bamboozled is also well worth rolling through giving the film a welcome behind the scenes view of the production and its intentions to enlighten the audience. The interview with Tommy Davidson and Savion Glover is also a great piece highlighting their characters and what it took for them to bring that kind of energy to their roles.

Bamboozled was largely overlooked when it was originally released in 2000. I remember it coming and going from the local movie theater I worked at rather quickly. It was a film that I was interested in when I first saw it but it kinda went past my head. Over the last 20 years now I've had the chance to give a couple more runs and each time it's become all the more relevant. Plus, it's a biting satire that genuinely asks its audience to reevaluate its entertainment sources while inviting you to laugh at some pretty damn shocking material.

The Criterion Collection showcases Bamboozled in the best possible home video release. Considering the original elements of early digital video and 16mm, it's not what one would call picture-perfect but it's the best presentation of this film by far. Couple with an active surround mix and a package of thoughtful and interesting bonus features, Bamboozled is an essential piece of the collection. Highly Recommended.