Alfonso Cuarón's Roma moves from streaming to Blu-ray with a beautiful release from the Criterion Collection. This intensely personal drama of a young woman navigating working life and unexpected life events in Mexico City is a beautiful and often painfully fully heartfelt story. Shot in beautiful black and white, the Blu-ray offers a striking video transfer, an effective audio mix, and provides some impressive bonus features. Sure, you could just watch this one on Netflix, but this release from Criterion gives Roma the true appreciation it deserves. Highly Recommended.

It's 1971 Mexico City. Cleo (Yalitza Aparicio) works for a middle-class family in the Colonia Roma neighborhood as one of their live-in maids. While her employers live seeming charming routine lives, Cleo middles in her own routine. As Cleo learns that her employers' marriage isn't as happy and picture-perfect as it would seem, she must also come to terms with her own life's upheaval. 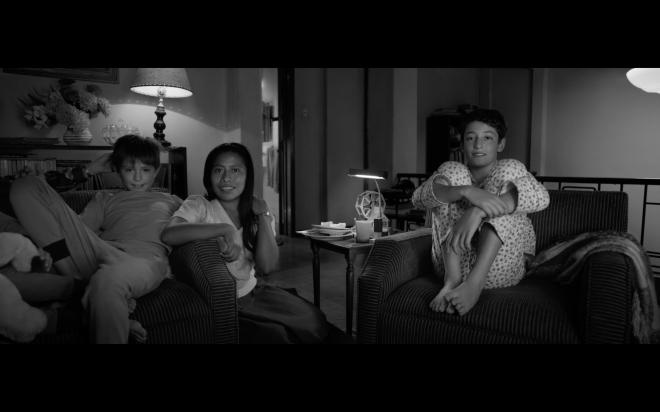 Directed, written, shot, and edited by Alfonso Cuarón, it's impossible to deny that this wasn't a passion project for the filmmaker. From Y Tu Mamá También to Children of Men to major releases like Gravity, Cuarón manages to find beautifully poignant drama within the tall tales of extraordinary circumstances. Whether lost in space, attending a school for magically gifted children, or a grim future without any children - his stories always have a natural heartbeat. Characters face their joys equally with their losses. Even with severe loss, there is always the optimism of life moving forward. Roma is another such story as we watch the young Cleo navigate her life within a tumultuous cultural upheaval. It's not a "fun" film, there is a lot of sadness within this story, but I wouldn't call it a depressing film. Sad events happen, but there's always hope and drive for a brighter better tomorrow. It's this measured optimism I continue to love about his films.

In 2018 in the process of moving, getting a new job, and settling down Roma slipped passed my radar all the way up through awards season. Part of that was my bias against Netflix releasing it. Their track record for acquiring films and releasing them was unceremonious. For a few years, it felt like any "Netflix Original" release that wasn't a TV show felt like studio cast-offs that wouldn't earn back their budgets. The last couple of years have changed that perception. It helps now that Netflix is much more aggressive about getting their films into theaters to be considered for awards season accolades. It was that bias that kept me believing Roma "must not be that good if it's only on Netflix." Well, I ate my share of humble pie soon after my first viewing.

After Children of Men - Roma is my second favorite of Cuarón's films. There's something to everything that he does as a filmmaker to appreciate each film he makes, but Roma is one of his best. Some filmmakers feel that "going dark" or making their film so intensely bleak that it's the only way to speak to an audience about the grand life experience. Sure enough, Cuarón can hit hard, but that doesn't mean he makes his films intentionally depressing. As dark and dreary as some of his films have been, I've never left the theater (or in this case my living room) feeling sad or depressed. If nothing else I actually come away inspired to take stock of and appreciate the simple joys in life. Even during the toughest times, there's usually something you can appreciate to motivate you to get past the rough patch and enjoy what's to come next.

Roma arrives on Blu-ray courtesy of The Criterion Collection in a single disc release. The disc is housed in a cardboard digipack case with a spine number 1014. Also included in the set is a massive 110-page book featuring an assortment of essays and photos from the film. The film is pressed on a Region Free BD-50 disc and opens to an animated main menu with Criterion's traditional navigation option.

The only way Roma could look any better on disc is if Criterion had issued a 4K UHD Blu-ray to fully preserve this often stunning black and white 2.38:1 transfer sourced from a 4K digital intermediate. Having watched this on Netflix and now again on Blu-ray, I do appreciate having it on disc. While I have speedy internet service that is more than capable of allowing me to enjoy a 4K Dolby Vision streaming film while also online gaming, I often experience issues with black levels being less than stellar. My streaming experience was often riddled with blocking and poor shadow separation. That issue simply doesn't exist on the disc as the black and white photography provides beautiful shadow gradience from bright white to deep inky blacks - often within the same shot. Scenes like when Cleo visits the movie theater are great examples of the bright light from the screen and projection booth are terrific examples of this shadow effect that even in the best of streaming circumstances never looked as clean as this disc.

The lone audio mix is a beautiful Spanish/Mixtec Dolby Atmos with English subtitles. This isn't a loud bombastic action movie - this is a purely atmospheric immersive film and this audio mix is terrific. The movie is dialog-driven with some amazing open vistas and cityscapes that gives this mix a real workout to provide a dynamic sense of location. A small bedroom can feel cramped and tight where a city can feel open and alive like any major metropolitan location. The vertical activity is purely incidental to the location. There are a few moments of specific pinpoint activity but they're really mostly used for setting the scene. LFE also has a welcome organic presence as well. Again this isn't a sustained effect for explosions or anything but when something makes an impact, it lands with extra oomph. As such, dialog is clear throughout and levels are spot on.

True to Criterion form, there is an excellent set of bonus features with this disc. The feature-length Road to Roma is an excellent insight into the making of the film. Normally I would prefer a scene-specific audio commentary but this is excellent and well worth watching. The rest of the bonus features offer plenty of info as well - all worth looking at.

Roma isn't an easy film. It's an often emotional gut-punch of a film. But even in its bleakest moments, Alfonso Cuarón maintains a sense of humanity enjoying tastes of joy and happiness. As we watch one young woman's life unfold you always have a sense of hope and optimism even during the darkest of moments. The Criterion Collection gives Roma the long-awaited disc release it deserves. With a picture-perfect transfer a sterling Atmos audio mix and an impressive set of bonus features, one can only hope that every upcoming Netflix release from Criterion is as good! Highly Recommended.