The House That Jack Built

The House That Jack Built from provocateur Lars von Trier is a dreadfully self-reflective film about a violent serial killer played by Matt Dillion in a career defining performance. Framed with scholarly discussions about art and violence the film walks a fine line between interesting and utterly disgusting. Scream Factory’s 2 Disc Blu-ray set is impressive with an outstanding A/V presentation and enough bonus features for fans of the film. This is a tough feature to stomach so I can only recommend it For Fans Only. 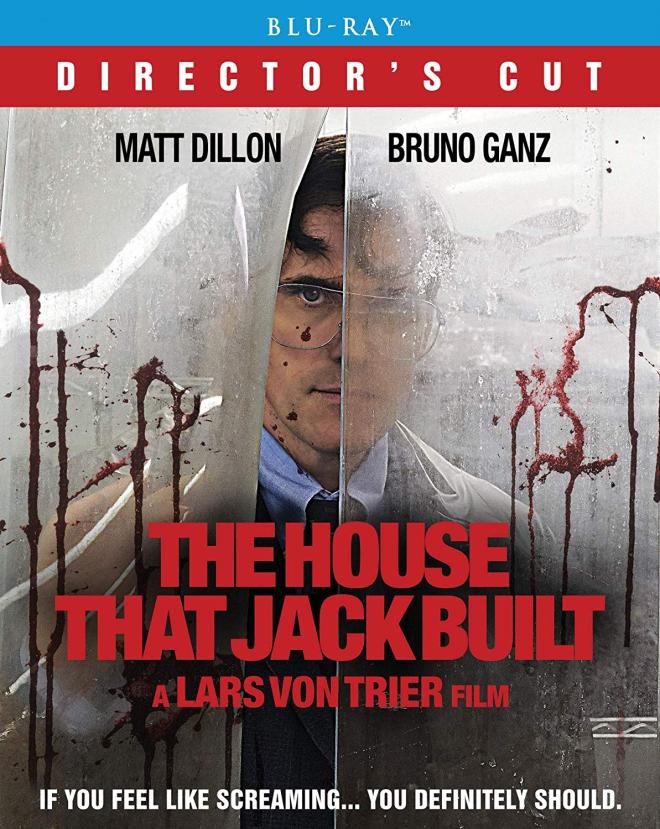 “Do you have a favorite number?”

You know that moment after trying something new for dinner you look around the table to see how everyone else is going to respond? It’s the pause before collectively agreeing on whether or not the tuna casserole tastes awful. That’s the feeling you get after sitting through The House That Jack Built. Is this good? Did I like it? This is one of von Trier’s goals with this sadistic yet deeply personal film. He throws in layer after layer hoping to push you farther away while wrestling with his own demons through the killer’s cycle of violence. It’s exhausting at times. Thankfully you don’t have to wrestle with your thoughts about a casserole for over 2 hours.

The House That Jack Built follows OCD engineer Jack over the course of 12 years with 5 separate events detailing his rise as a serial killer in the 70’s/early 80’s. Framing each of the five “incidents” is a narrated scholarly discussion between Jack and an unknown person named Verge. The two discuss the intersection of violence and art in which Jack postulates that his murders (and other great atrocities) are works of art. As Jack grows as a killer so does his confidence which leads to greater risks in pursuing his art. By the end Verge has led Jack from his humble beginnings of exploring art in violence to the literal depths of Hell.

Jack’s “incidents” begin with a rather mundane horror cliche in which he picks up a woman (Uma Thurman) stranded by the side of the road. He takes her to a repair shop to call for help but she never makes it home safely. Her condescending friendliness ends with “You’re way too much of a wimp to murder someone”. From here Jack’s confidence rises as he stalks and kills a widower (von Trier regular Siobhan Fallon Hogan), murders a family during a hunting trip while sporting red baseball hats (solidifying von Trier’s political views), dismembers a girlfriend, then finally in his fifth incident Jack creates his masterpiece.

Broadly interpreting William Blake’s poems “The Lamb” and “The Tyger” Jack sees himself as the proverbial killer tiger creating art from the death of the lambs. Verge calls him out on the position of violence as art. “Don’t look at the acts. Look at the works, the whole notion of trophies” Jack retorts. Here Jack and Verge detail art within destruction and decomposition versus creation and love for art’s sake. Jack explains that frequently it is the icon that brings real artistic value to the world whether they be the mass murderers of the world or the engineers who put sirens on the Stuka dive bomber airplane. “Heaven and Hell are one and the same. The soul belongs to heaven and the body to hell.” The soul is the reason, and the body is all the dangerous things, for example, art and icons.” Surprisingly, these tangents never feel out of place within the story. Jack is a methodical and educated killer who cannot help but obsess over the details of everything from the cleanliness of his victim’s home to the beauty of Genn Gould’s musicality.

Matt Dillion is exceptional here providing a career defining performance in a role that is magnetic and yet repulsive. Here Dillon isn’t tasked with a singular stock character out for blood, but rather a highly motivated killer bumbling through the growing pains of finding meaning through his “Art”. The actor’s range here is astounding. The supporting cast of Uma Thurman, Bruno Ganz, Siobhan Hogan, and Riley Keough provide memorable performances as well. I find it playfully ironic that the angel from Wings of Desire is now escorting a serial killer to the depths of Hell.

The House That Jack Built makes a difficult case for separating art from the artist. Here von Trier reflects on his past and inner demons through the lens of a serial killer’s philosophical tangents and deep existential questions that contemplate the value of a lifetime’s work and the creation of Art. Reading into these themes too deeply can sully the film’s achievements which are masterful especially in the operatic third act. I can’t delve into the director’s motivations too much or this becomes something else entirely, right? As a fan of the director's work I had a great time feeling uneasy and slightly amused at Jack's escapades. If you want to see the film I recommend a palate cleanser beforehand with some bite to get you ready. Maybe something like von Trier’s The Five Obstructions to alienate you even more. Enjoy!

The House That Jack Built arrives on Blu-ray thanks to IFC Films and Scream Factory. Housed in a standard side-by-side keepcase the two-disc set includes a Director’s Cut and Theatrical cut disc. Both discs are BD-50 Region A locked. Once the disc is loaded the logos for IFC, Shout! Factory, Scream Factory are presented then trailers for Radioflash, Greener Grass, and The Nightingale are shown. The static Main Menu screen presents you with typical navigation options.

The image quality for The House That Jack Built is bright and full of detail in this 1080p MPEG-4 AVC encoded transfer. Blacks see some slight noise when Jack enters the freezer with his first victim. Utilizing different aspect ratios for archival footage, animation, and unique insert shots film grain is present in varying degrees and quality. During the majority of Jack’s narrative grain is minimal in the 2.39:1 aspect ratio. Primaries are bold with contrast levels a bit high in places though decidedly an artistic preference leaving a dreadfully dismal color palette that mimics an already dismal timeframe. Jack’s 3rd incident ramps up the saturation and fine detail levels as we enter the apex of his self-referential behavior. Facial features, costuming, and the intricate details within scenes are well defined. Natural skin tones throughout especially on Jack’s victims. 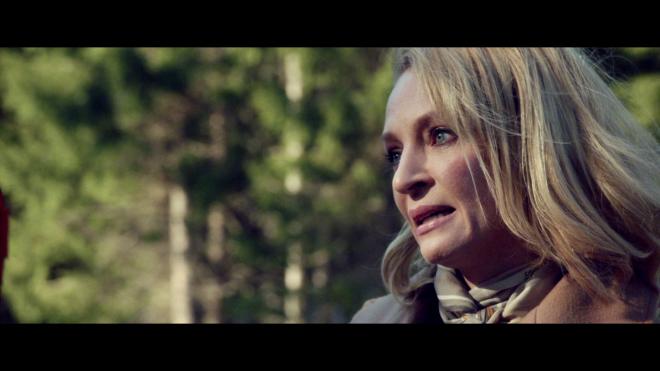 The House That Jack Built is provided with a DTS-HD MA 5.1 and its partner in crime the DTS HD-MA 2.0. You don’t lose a great deal by choosing the 2.0 track. It’s all narration, frankly.  Audio is clear and clean free of distortion. A dialogue-heavy film with plenty of weird electronic buzzing and menacing crescendos in the texture which keeps the surround elements minimal unless they’re needed to heighten tension. LFE is minimal but present. The audio mix is predictable, but never dull. Keep the volume up to enhance the experience even more. 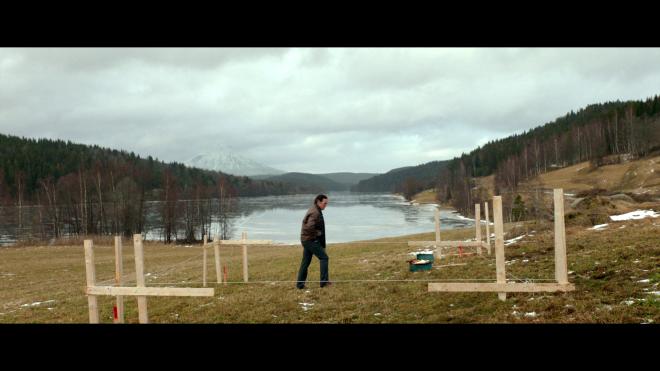 Director’s Cut of the Film - Only a minute longer than the Theatrical Cut but it should be clear to anyone who has seen the Director’s Cut what was removed from the feature to secure a theatrical release. It’s all a moot point, really. Both cuts were theatrically screened for an audience. Frankly if you’re in this deep with von Trier you wanna experience the whole enchilada, amirite?

Sonning Prize: Interview with Lars Von Trier (HD 26:46) Peter Schepelern, associate professor emeritus at the University of Copenhagen, interviews Lars Von Trier on his winning of the prestigious Sonning Prize for his contribution to European culture.

Theatrical Trailer (HD 2:32) - On the Theatrical Cut disc only. 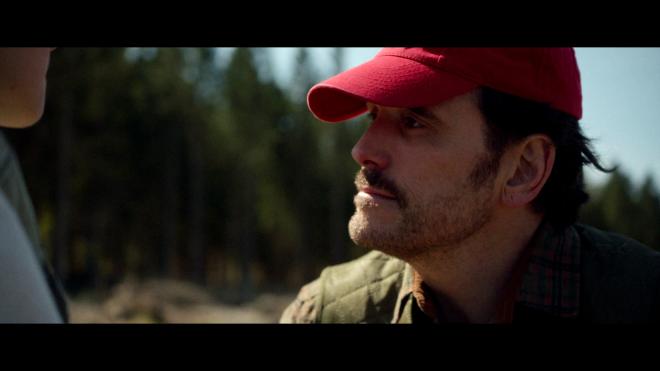 The House That Jack Built is a fascinating and controversial film weighted down with deep introspective musings on life, art, and bloody violence. Complete with meta-digressions that would please Dante himself, von Trier’s alarming film turns the lens on himself while providing us with an outstanding performance from Matt Dillon.

Scream! Factory’s 2 Disc Blu-ray set provides an outstanding A/V presentation and enough bonus features for fans of the film. The inclusion of a Theatrical Cut is purely filler and shouldn’t be a selling point for anyone thinking they can have a watered-down version of The House That Jack Built. I am recommending this one to fans of von Trier as it’s a tough film to digest and an even harder one to watch. For Fans Only.