The Nightingale follows a young girl, whose world is rocked by vicious violent men, who in turn seeks out revenge in 1825 with the help of an unlikely friend. It's dirty, brutal, unspeakable, but also full of beautiful elements. The 1080p HD video presentation looks excellent and the DTS-HD 5.1 audio track is lively and elegant, along with a couple of great interview extras. Highly Recommended! 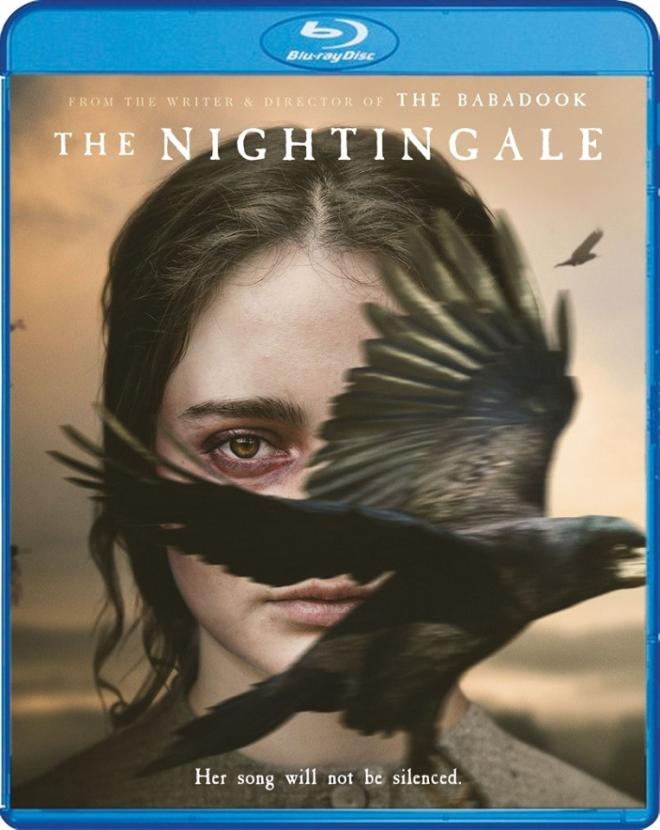 The 2014 feature film The Babadook took the world by storm. The horror that Australian writer-director Jennifer Kent created in that movie was refreshing and original. It quickly became a genre favorite amongst horror fans and myself where I still watch it five years later on a regular basis. Kent’s second film The Nightingale is a huge deviation from The Babadook in tone, style, and time, although the semblance of a mother-daughter relationship is rooted in the story. This period piece is an ultra-violent thriller that goes for the realistic approach where a woman who underwent the vilest attack sets out on a revenge journey to confront her assailants in Australia’s blood-soaked 19th century.

We meet Clare (played perfectly by Aisling Franciosi), who is a young Irish convict who lives with her husband and their new baby. Clare sings like an angel and must do manual labor for her sentence while witnessing the evil British regime do and say what they please, including murder and rape. Early on, Clare is viciously attacked by three British officers in uniform that is so visceral that I found it difficult to watch. It doesn’t end with here either, but if you think of the worst thing that can happen to someone, Kent takes a couple of steps further here. After this horrendous assault, Clare sets out to find the three men and kill them. She crosses paths with an aboriginal man she calls Boy, who helps her out in her quest.

Back in this time period, the British soldiers nearly wiped out all of the aboriginal race on sight, so the duo that is formed between Boy and Clare has multiple layers of motivation. This unlikely pair have been persecuted their whole lives and have lost the ones they love, but both have different ways of dealing with their anger, which Kent showcases on-screen flawlessly. Clare’s nightmares about her attack are pure horror and her emotions are free-flowing in the form of tears and violence, but also a simplistic beauty of a song. The same can be said with Boy as the two slowly learn that they are one and the same.

Through this slow burn of a film, we see nasty, grotesque acts of violence, where it seems like the antagonists keep earning points on their villain card, but according to research, these are based on true accounts from history. Being a revenge flick, there is some sort of expectation from the audience for an appeasing payoff, whether it be some form of Tarantino alternate reality (like in Once Upon a Time in Hollywood), or the gratifying kills in I Spit On Your Grave.) Jennifer Kent doesn’t go this route and that’s a ballsy move, but it works on so many levels. First off, it’s real and we get why Clare ultimately makes her decision in the end. It’s not calculated, but a grounded resolution that puts her on top of her aggressors. Kudos to Kent for breaking the mold here.

Each actor in the film delivers a stunning performance, raw with emotion and passion even in the most subtle moments. This is a very difficult film to watch because it is not upbeat or happy. But sometimes, you have to take a look at the horrors that humans can do so it never will be repeated. However, some of the themes in this film are very relevant in this turbulent climate of ours right now. Jennifer Kent still is a no-holds-barred filmmaker with an unflinching eye. In all of its bloody chaos, you can still find the beauty within The Nightingale.

The Nightingale heads to Blu-ray from Shout! Factory with a 1080p transfer along with a rare Fullscreen 1.37:1 aspect ratio. The lone disc is housed in a hard, blue plastic case with a cardboard sleeve, featuring Aisling Franciosi and a bird. There is not a digital download code, but a few trailers for other movies play before the main menu. 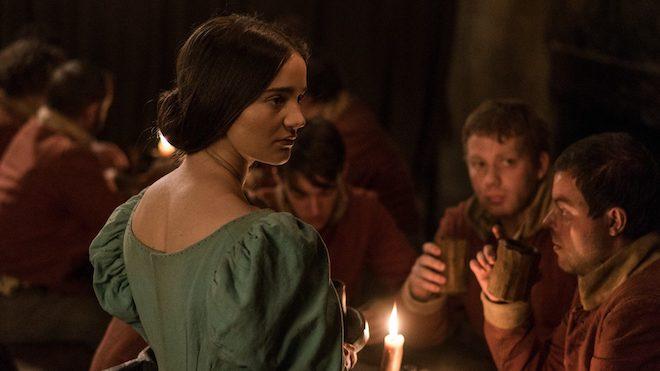 Surviving its way to Blu-ray from Shout! Factory, The Nightingale has a 1080p HD transfer with superb detail and color and is presented in its Fullscreen version of 1.37:1, which was the way it was released theatrically.

Colors are rich and bold throughout this otherwise gloomy toned film. Set mostly in the woods, earthy colors are the consistent palette used with deep greens in the tree leaves and plant life with varying layers of brown in the dirt, tree trunks, and ragged clothes the two protagonists wear. It's a wonderful contrast between the two with the added grayish-blue sky above. A few bursts of color include red and blue wool uniforms with splashes of gold. The darker sequences lit by fire have a good amber glow, which never hinders the color spectrum here. Black levels are very inky with no crush, making the lower-lit scenes stand out with deeper black shadows. Skin tones are also natural.

The detail is quite sharp and vivid too with close-ups revealing all of the nasty wounds on faces and body parts. Other specks of dirt and other fluids look realistic in tight shots as do the intricate details in the period costumes that showcase all the fantastic textures of wool and cloth. Individual hairs, wrinkles, and makeup effects look intense as well. Wider shots of the forest and old houses look incredible as well, giving the film a lot of scope, even with this Fullscreen presentation.

This picture has a great dual look to it that compliments itself with the less colorful exteriors that seem cold and nasty in relation to the warm and orange filled rooms with interior shots. It's a rather beautiful image that is engaging and claustrophobic at times with its out-of-the-norm aspect ratio. Lastly, there were no major video issues to speak of. 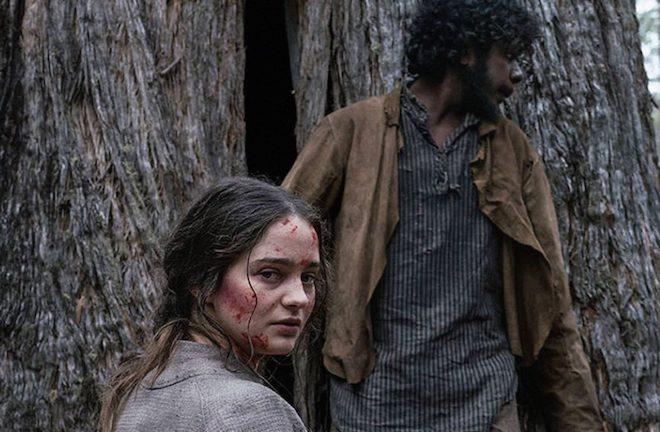 The Nightingale comes with a lossless DTS-HD MA 5.1 audio track that is a great mix of quiet, serene soundscapes and violent atrocities that you never want to hear again, all of which are well-balanced and nuanced.

The sound effects are all loud and robust, which enhances this chaotic immersion in the middle of the woods. Animal life in the background, rivers running, the wind blowing, trees rustling, and other footsteps engulf the speakers perfectly. Other sound effects like gun blasts, beating people to death, metal clanging against wood or other metal, and even the sound of a baby crying, ending in a nasty thud is boisterous and frightening as it should be.

All of the necessary bass cues brings in the low end to add that sound depth that has a nice rumble to it. The musical score always adds to the suspense of each scene perfectly and the dialogue is crystal clear and easy to follow along with. There were no audio problems either. 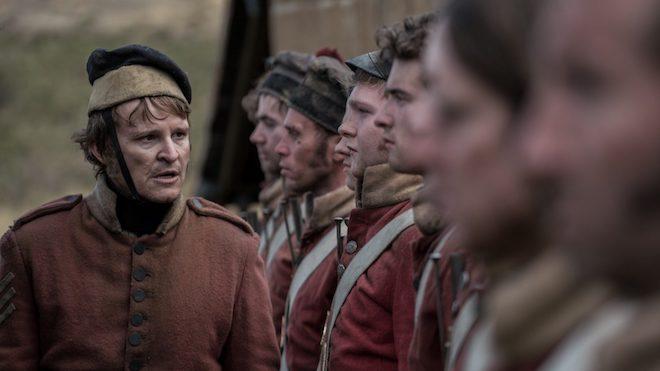 With about 54 minutes of bonus features, the bulk of them consists of talking-head interviews with the cast and crew, which all provide candid discussions about the film. 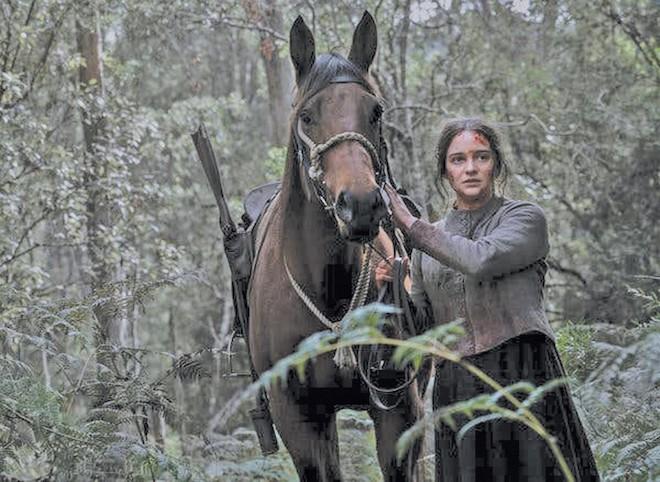 The Nightingale in an unapologetic, violent film that manages to still find the beauty in the world. Director Jennifer Kent is a force in the industry that has something to say through her work that nobody is really doing right now. Even though this is difficult to watch at times, it's one to stick with. The video and audio presentations are both top-notch and the bonus features are worth your time. Highly Recommended!