Bond 50: On Her Majesty's Secret Service

On September 25th, 2012, MGM Home Entertainment released the 'Bond 50' collection, a box set that contains no less than 22 films from the James Bond franchise's first 50 years. In order to provide the most comprehensive coverage, High-Def Digest will review each of the discs in this package separately. For the index of all reviews in this series, as well as details regarding bonus content exclusive to the box set, see our 'Bond 50' hub review.

"I hope I can live up to your high standards."

After five incredibly successful movies, Sean Connery decided that he'd had enough of playing James Bond and announced that 'You Only Live Twice' would be his final 007 film. Despite this, producers of the franchise had no intention of retiring their popular (and profitable) character. A new Bond was needed, simple as that. But would audiences accept anyone else in the role? Could James Bond survive without Sean Connery?

Based on Ian Fleming's novel, the screenplay for 'On Her Majesty's Secret Service' was originally written with Connery in mind, intended as his next film after 'Thunderball'. When production logistics involving its wintery settings caused the project to be pushed back, 'You Only Live Twice' was moved forward to take its place. This proved problematic in several respects, not the least of which were that Connery bowed out of the series and the delayed 'Service' had to be tailored for a new lead. To that end, the producers favored British TV star Roger Moore, who'd been a strong contender for the part in 'Dr. No' before Connery was cast. For better or worse, other commitments left Moore unavailable. Eventually, after a worldwide search, a relatively unknown Australian model named George Lazenby was selected to take over the iconic role and become the next James Bond.

A ruggedly handsome man with more than a passing resemblance to Sean Connery, Lazenby must have seemed like a fortuitous discovery for filmmakers who desperately wanted to reassure viewers that the character they'd see in this film was indeed the same James Bond they'd come to know. In addition to the giving the actor a similar hairstyle and instructing him to play the part more or less as Connery had, the film also prominently features clips from the five earlier movies in its opening credits sequence. In a later scene, Bond rummages through his desk drawer and reminisces over mementos from his previous adventures, including Honey Ryder's knife and Rosa Klebb's shoe. Key members of the supporting cast such as Q, M and Moneypenny turn up as expected. The plot even has Bond face a familiar foe.

In this mission, Bond travels to Switzerland undercover in the guise of a prissy genealogist, in order to infiltrate a mountaintop allergy clinic believed to be a front for S.P.E.C.T.R.E. mastermind Ernst Stavro Blofeld (here played by Telly Savalas). Naturally, Blofeld has a diabolical scheme to plunge the world into chaos. This one involves a bio-weapon that causes infertility, which he plans to spread across the globe via his clinic's brainwashed patients.

Judged in the context of the film itself, Lazenby makes a fine Bond. Like Connery, he's both dapper and athletic. He can handle the serious drama, yet also deliver flippant dialogue. He's cool under pressure, but a real brawler in the fight scenes. Lazenby's inexperience at acting turned out to be less a problem for his performance (which is perfectly fine) than it did for his behind-the-scenes professionalism. All through the production, rumors abounded that the star was difficult to work with and feuded with his co-stars. Years later, even the actor admitted that he'd let his ego get the better of him. By the time production wrapped, it was clear that Lazenby wouldn't return for another movie, though stories conflict as to whether he quit of his own volition or was fired.

As the one and only James Bond film to star George Lazenby, 'On Her Majesty's Secret Service' is often seen as an odd duck in the series. Not helping matters is the fact that the movie has no opening theme song, and is mired in some of the unfortunate fashion trends of the 1960s, even more so than the other films of the era. Lazenby's Bond has a fondness for frilly shirts, and spends half the picture in a ridiculous kilt. (Admittedly, he's supposed to be undercover in that part, but still…)

By this sixth entry, the franchise's sense of continuity was already shaky at best. Bond's friend Felix Leiter had been played by three wildly different actors in three films. Nonetheless, inconsistencies with the Blofeld character are really bothersome here. The villain inexplicably no longer has a scar on his face, and is played much differently than his last appearance. For that matter, it seems odd that Bond and Blofeld wouldn't immediately recognize each other after having just battled in 'You Only Live Twice'. (That would probably be less of an issue had the two films not swapped production order.)

On the other hand, the movie has quite a lot in its favor. Blofeld's far-fetched scheme notwithstanding, 'On Her Majesty's Secret Service' generally has a less fantastical and more down-to-Earth tone than the bloated excess of 'You Only Live Twice'. Promoted to director for the first time, former series editor Peter Hunt stages some terrific action scenes. This film features Bond's first ski chase, which (aside from a bit of obvious rear-projection and undercranking) is terrifically choreographed with some great stunt work. A car chase through the middle of a demolition derby is very suspenseful, and the climactic helicopter assault on the clinic delivers the epic excitement that fans had come to expect.

'On Her Majesty's Secret Service' also does one important thing that no prior 007 picture had accomplished, and none would attempt again for 40 years. It gives Bond real emotional stakes. This is the first movie where famed playboy James Bond falls genuinely in love. The object of his affection is troubled socialite Tracy di Vicenzo (Diana Rigg), a woman whose wits match his own. If anything, Lazenby makes the romance believable in a way that perhaps even Connery (who'd clearly grown tired of the role) couldn't have sold at the time.

While his feelings for Tracy of course won't prevent Bond from seducing a bevy of sexy vixens at Blofeld's clinic, they will lead to an uncharacteristic decision when the mission is over and a devastatingly powerful ending, the likes of which no Bond movie before or since has matched. Even if just for that, 'On Her Majesty's Secret Service' deserves to rank as one of the very best James Bond films.


The 'Bond 50' box set marks the first appearance of 'On Her Majesty's Secret Service' on the Blu-ray format. A standalone edition is also available (initially exclusive to the Best Buy retail chain).

Even though all of the discs in the box set that had previously been released back in 2008 remain locked to Region A, first-time Blu-rays such as this one are region-free. The menus on the disc have the same layout and design as the other Bond titles. Like most of the early Bond pictures, 'On Her Majesty's Secret Service' was granted a new 4k scan by Lowry Digital for the Ultimate Edition DVD in 2006. The quality of Lowry's work varied from title to title. This one is a little erratic.

At its best, the 1080p/AVC MPEG-4 transfer has an excellent, sometimes extraordinary vibrancy of detail, especially in interior scenes and close-ups. However, other scenes fluctuate from moderate to poor in this regard. In his audio commentary, director Peter Hunt mentions that he intentionally lit this film differently than the earlier Bond movies. That's quite evident, but even so, the disc also appears to have had its brightness and contrast boosted electronically. The movie is often overly-bright, with clipping in whites such as Bond's tuxedo shirt. This effectively makes the movie look very flat, and kind of cheap. Hunt specifically says that he didn't want the sets to look like soundstage sets, yet some (including the casino early on) look extremely stagy, and a lot of that is the fault of too much brightness.

Colors are all over the place. Day-for-night scenes are heavily tinted blue, which is very different than previous home video transfers. I can't say for certain which is more accurate, but I'm inclined to think that the Blu-ray is in error. Even in some daytime scenes, white snow has a bluish tinge.

The photography is preserved in its original 2.35:1 aspect ratio, except for the opening titles sequence, which (like 'Thunderball', 'The Spy Who Loved Me' and 'Moonraker') has been squeezed to a ratio of about 2.20:1 with pillarboxing on the sides. This is irritating, and there's no good reason for it.

The film elements suffer occasional scratches that seemingly could have been painted out digitally, though this problem isn't nearly as distracting as the Blu-rays for 'Thunderball' or 'You Only Live Twice'. Some minor edge ringing artifacts also intrude from time to time.

Even with these issues, the disc's most impressive scenes look really great, and my impression is favorable overall. 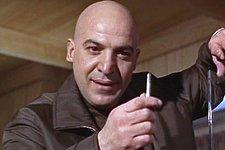 The DTS-HD Master Audio soundtrack on this disc is one of the most schizophrenic of the Bond series' 5.1 remixes. Music is a little thin, and the Louis Armstrong song sounds like it's been processed into fake stereo (rather than remastered from original stereo elements, if those should exist). Sound effects and dialogue are frequently weak. For some reason, the mixers decided to pan dialogue directionally across the front soundstage (something that occasionally happened in genuine multi-channel soundtracks of the era, but is rarely done anymore). Unfortunately, this wasn't performed very well. Every time it happens, the track suffers distracting phase errors that result in a brief echo.

On the other hand, some scenes are surprisingly effective. The ambient noises in the interior of the cable car gearworks create a very convincing sense of space and scale. The directional machine gun fire during the ski chase also suits the scene well and is a lot of fun. It's a shame that other scenes are so sloppy.

The movie's original mono mix has also been provided in lossy Dolby Digital format, with even poorer fidelity. Of the two, I think that I'm inclined to favor the 5.1 remix, despite its issues. 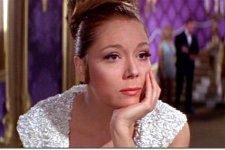 The bonus features on the Blu-ray first appeared on the Ultimate Edition DVD released in 2006. Even though they're all technically encoded on disc at 1080i resolution, the majority appear to have been upconverted from standard definition.

Often considered the black sheep of the James Bond series, 'On Her Majesty's Secret Service' is actually one of its best entries. One-shot star George Lazenby made a fine replacement for Sean Connery, and deserved a better run in the role.

The Blu-ray quality is a little hit-or-miss, for both video and audio, but still a solid upgrade from DVD. The disc also has a satisfying assortment of bonus features. Whether on its own or as part of the 'Bond 50' package, this disc is recommended for any 007 fan.

Buy Now
3rd Party $224.00
See what people are saying about this story or others
See Comments in Forum
Previous Next
Pre-Orders
Tomorrow's latest releases