Edge of the Axe

If it's a horror movie from the 80s, you got a great chance that it's a slasher flick. 1988's Edge of the Axe certainly dips its toes in the slasher waters complete with masked killer and a signature weapon but it manages to hold its own even if it's not entirely unique or dependent on a holiday to give it a theme. A great watch just the same. Arrow Video brings this video store favorite to Blu-ray with a solid A/V presentation along with a bunch of great bonus features to keep you entertained. If you love 80s slashers, this isn't quite a classic but it's a fun run. Recommended.

Paddock County was a nice sleepy town to call home without anything going on - and nothing to threaten the local populace. That is until motorcycle-riding computer geek Gerald (Barton Faulks) arrives on the scene. Strangely around the same time, the murders start to happen. A killer in a rain slicker wearing a white mask and wielding an axe seemingly picking people off at random. Or is it random? While the local law is stumped, Brandon starts using that computer of his along with the help of a beautiful local named Lillian (Christina Marie Lane) - who also loves computers - to identify the killer before it's too late! 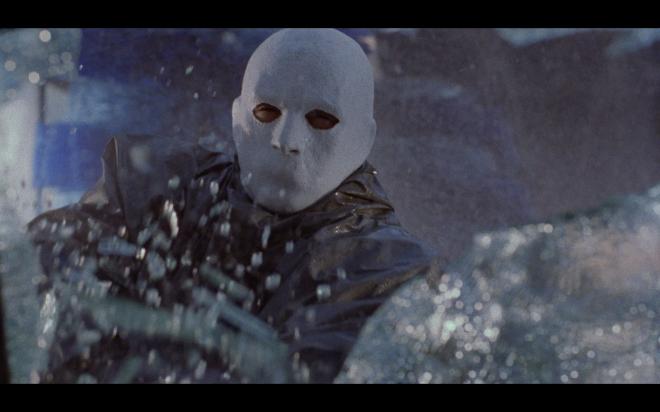 A Spanish-American production from José Ramón Larraz, Edge of the Axe may be memorable for most folks because of the iconic video box art with the axe-wielding killer staring through a shattered door. I remember seeing that image every time I would sneak through the horror section at our local mom and pop rental store. Now, all due to credit to my mother for trying to protect me from seeing gory material, she would frequently stop short my efforts to watch the newest bloodiest flicks to reach rental shelves. Somehow, I managed to slip this one past her! I always wondered if this was a ploy so that I'd watch something truly scary and force me to regret my decisions? Didn't happen. I fondly remember watching this one in our basement with the volume low lest my parents upstairs should hear the terrifying cries from one hapless victim to the next. I have these great memories of sneaking a fast one on my parents - so when Arrow announced this release on Blu-ray I was very excited to take another trip down nostalgia lane. Unfortunately, it doesn't 100% hold up.

Where Edge of the Axe works best is as a slasher with inept police incapable of stopping a killer. Where it falls apart is with its presentation of "state-of-the-art" computers. As someone who works in networks, SEO, and basic information database storage - this is the part of the movie I just can't shake. Gerald simply plugs in a computer and somehow is able to research private offline patient records? It doesn't work that way. It could pass 30 years ago, but today it's the fallacy that I have a real hard time ignoring. But that doesn't mean swimming in these nostalgic waters wasn't a good time. I'd forgotten the big ending twist so that was a fun kick. Was that really the killer? Or did the killer pull a fast one? Will we ever know? I feel like that ending was intended to set up a sequel franchise that simply never appeared.

All the same, for an 80s slasher that plays to genre conventions, this was a fun one. It's not pinned down by some random holiday like April Fools Day or any number of Halloween / Friday the 13th knockoffs. If you want to follow the twists for literal turns, the killer has genuine motivation to kill the people they're after. The mask is simple, the method of dispatching folks brutal and effective, and José Ramón Larraz manages tension and suspense nicely to keep the film engaging and fun. You'll never blindly stick your fingers in a closet again! It's not the best of the best out there, but it's fun. On a cold dark winter night, it's solid entertainment - even if my nostalgia-addled grown-up brain didn't love it quite as much as my childhood memories.

Edge of the Axe arrives on Blu-ray from Arrow Video in a single disc release. Pressed on a BD-50 disc, the disc is housed in Arrow's standard clear plastic case with reversible artwork. If you were lucky enough to pre-order direct you may have gotten a slipcover. Also included is an insert booklet containing trivia and essays about the film.

Sourced from a new 2K scan and restoration, Edge of the Axe earns high marks with this 1.85:1 1080p transfer. Given that my memories of this movie were from a well worn VHS tape, this is an obvious improvement in image quality! Film grain is apparent throughout giving the image a richly film-like appearance. As follows, details are often stunning giving viewers full appreciation of our masked killer and their victims. Night and daylight sequences are equally impressive allowing full appreciation of facial features, costumes, and the film's scenic locations. Black levels are deep and inky for the most part and give the image a terrific sense of three-dimensional depth. Where I step back slightly with this transfer is the blue push. While it's not always severe and it doesn't hinder primaries or skew flesh tones, it can occasionally affect black levels so they don't quite approach true black and can flatten the image. This could well be a baked-in issue, my memory of watching this when I was all of 8-years-old isn't a reliable enough comparison! Just the same, it's an odd anomaly that crops up from time to time.

Edge of the Axe comes packed with both the English and Spanish audio tracks presented in LPCM mono and the results are impressive. While clearly originally recorded in English, that track has a much more organic quality to it with voices, sound effects, and the score all mixing nicely. Some of the outdoor sequences or when they're out on the lake boating the mix can feel open with some nice - if limited - imaging. In contrast, the Spanish mix feels a bit more canned. The imaging presence is nice but the layered dubbing can sound a little stiff and inorganic. That's not a dealbreaker for me as any future viewing will only be the English mix. I was more curious to see what the Spanish version brought to the plate. Aside from different sounding voices and subtitles, the Spanish track doesn't bring anything new to the show.

In true Arrow form, they once again deliver a solid collection of bonus features. The new cast and crew interviews are nice to see - especially the Colin Arthur interview about the make-up effects work. The real win for this selection is the pair of bonus features that offer a lot of great insights into the movie as well as some fan appreciation.

Edge of the Axe was another fun dip into nostalgic waters of my misspent childhood hounding the horror section of my local video store. I wasn't always able to pull a fast one on my mom but occasionally one would slip through the cracks. It was a fun revisit, but nearly 25 years between viewings, the adult me and the child me don't quite see eye-to-eye. As a near 40-year-old, I found the show fun but had a really hard time suspending disbelief with little techno-babble contrivances. Otherwise, the kills and gore are terrific and worth the price of admission.

Arrow delivers another first-rate Blu-ray release with Edge of the Axe providing a richly detailed film-like video transfer, great audio, and a fine assortment of interesting bonus features to match! If you're a fan of 80s slashers that aren't hinged upon a random holiday - give this one a spin. Recommended.