Harriet Tubman is one of America's most inspiring and heroic figures, and she deserves a top-notch biographical film. Unfortunately, Harriet doesn't quite make the grade, despite Cynthia Erivo's passionate, Oscar-nominated portrayal of the legendary abolitionist who helped dozens of slaves escape to freedom. Though epic in scope and beautifully shot, Harriet often favors melodrama over realism, and the result is a movie that feels like a movie, not history. Universal's Blu-ray presentation salutes the film's artistry with a dazzling video transfer and exceptional audio. It's too bad Harriet doesn't reach its potential, but it's still worth a look for Erivo's performance and the amazing real-life woman it reverently honors.

Harriet Tubman is a towering figure in American history, and someone who has fascinated me since I first learned about her in elementary school almost a half century ago. A runaway slave who improbably fled to freedom, then worked tirelessly as a "conductor" on the famed Underground Railroad to guide dozens of her brothers and sisters in bondage to the promised land of emancipation, Tubman devoted her life to a noble cause and consistently risked her life to save others from oppression and abuse. She was diminutive in stature, but her aura was huge, thanks to her steely will, stubborn resolve, boundless courage, and admirable strength. To many, she was a saint. To others, merely a superhero, whose seeming invincibility inspired them to fight for their God-given right to live free.

And a superhero is exactly how writer-director Kasi Lemmons often depicts Tubman in her reverent yet unsatisfying biopic Harriet. (Personally, I would have preferred the saint approach.) No, Lemmons doesn't dress actress Cynthia Erivo in tights and a cape, but she still paints Tubman as an unstoppable force of nature fighting for truth, justice, and the American way. That's not all bad, because Tubman did defy odds, overcome limitations, face great danger, and confront villains, but she most likely did such noble and brave things in a much quieter, more resolute and unassuming manner than the woman Lemmons puts up on the screen.

Let's face it, these days a film heroine has to be larger than life. But Harriet Tubman already is. She doesn't need to be enhanced by the stunts, action, and melodrama that often consume Harriet and ultimately become its Kryptonite. Tubman's lofty reputation precedes her, and though invented scenes may add conflict and tension and make Harriet a more exciting ride, they subjugate the larger, more substantive issues at hand. So, too, do a series of poorly drawn fictional characters who muddy the history and leave the viewer perplexed. As the narrative progresses, the film devolves into a clichéd vendetta tale, as the white family that owned Tubman tirelessly pursues their lost property and seeks to destroy her. 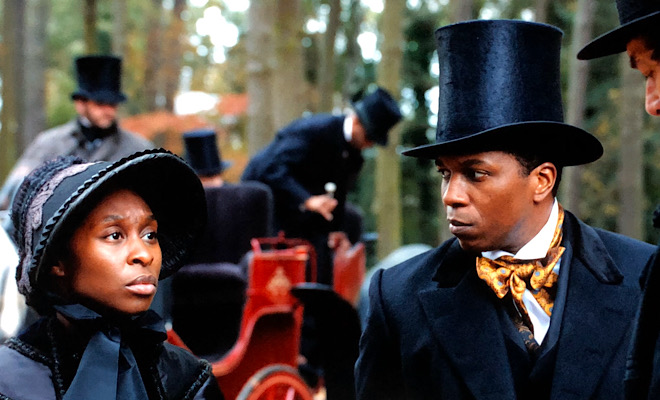 Tubman defines female empowerment, but trapping her inside a formulaic framework does this historical icon a grave disservice. I laud Lemmons for choosing to salute "the woman called Moses," and I don't begrudge her for taking a more personal approach to her story, but why take liberties when the historical record is so rich? Why devise scenes where Harriet holds the son of her former owner at gunpoint or tries to rescue her estranged husband when instead we could witness how Tubman shaped her times, fit into history, influenced other lives, and worked the Underground Railroad? Some might say that's the job of documentaries, not dramas, but if done well, the two can be merged into a compelling whole.

The bulk of Harriet covers about a 10-year period in Tubman's life. The screenplay by Lemmons and Gregory Allen Howard chronicles her impulsive escape from the Maryland farm where she'd been enslaved for years, her difficult and frightening solo journey to freedom, her subsequent attempts to emancipate her family, the collapse of her marriage, and her involvement with the Underground Railroad, a network of abolitionists and sympathizers who provided a pathway to freedom for runaway slaves.

Like a textbook, the script hits the historical highlights, but by choosing to zero in on Harriet's emotional interactions it ends up glossing over the finer details of Tubman's incredibly important work. Here we have a black woman who became a respected and revered leader in a restricted world dominated by white men during a time when both African-Americans and women were considered second- and third-class citizens. The dynamics of those relationships must have been fascinating, but sadly aren't explored in the film. Instead of taking the high road and documenting Harriet's continued rise, the last third of the movie moves into thriller mode as it depicts the dogged and vindictive efforts of Harriet's former owners to apprehend her. 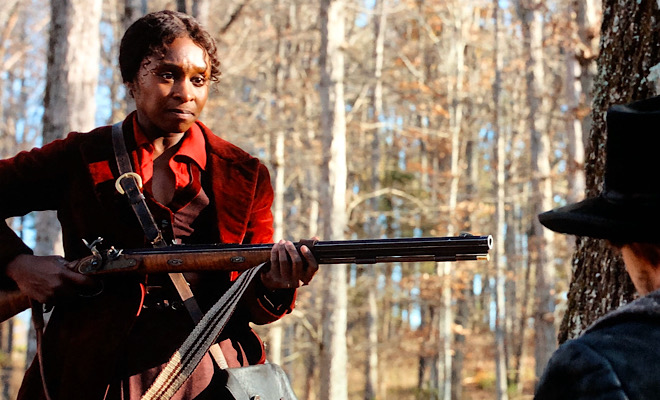 Still, there's a lot to like about Harriet. Lush cinematography, meticulous attention to historical detail, and a majestic score all combine to produce the sweeping feel of an old-fashioned epic. All the roles are well cast and well acted. Leslie Odom, Jr., who won a Tony Award for his stirring performance as Aaron Burr in the Broadway sensation Hamilton, makes a strong impression as abolitionist William Still, as does Janelle Monáe, who portrays an affluent boarding house owner who shelters Tubman upon her arrival in Philadelphia after her arduous journey to freedom.

And then there's a dynamo named Cynthia Erivo. If there's one reason to see Harriet, she is it. Broadway buffs know her from her Tony Award-winning turn as Celie in the musical The Color Purple, but film fans may be unfamiliar with the work of this gifted British actress/singer. Well, they'll probably see a lot more of her from now on. Erivo immerses herself in the rigorous role, which requires both physical and emotional stamina, and rarely hits a false note. Even when the screenplay stumbles, Erivo remains authentic, justly earning her Best Actress Oscar nod. (She also co-wrote and performs the rousing, Oscar-nominated song that plays over the movie's closing credits.)

Harriet has heart and plenty of soul. It honors one of America's true heroes with reverence and grace, but not always in the manner its subject deserves. The film's reliance on mainstream formulas dulls its power, and its tone doesn't always suit the material. Harriet Tubman was a simple, modest woman, and a simpler, more modest movie might better reflect this astounding figure and better capture her tremendous aura's iridescent glow. 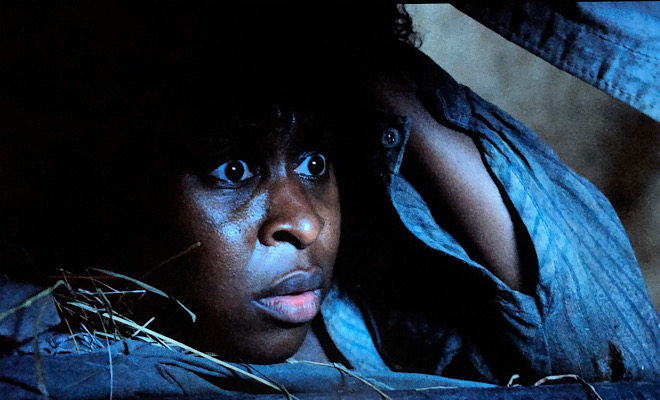 Harriet arrives on Blu-ray packaged in a standard case inside a sleeve with raised lettering. A leaflet containing the code for the Movies Anywhere digital copy and a standard-def DVD are tucked inside the front cover. Video codec is 1080p/AVC MPEG-4 and audio is DTS-HD Master Audio 7.1. Once the disc is inserted into the player, the full-motion menu with music immediately pops up; no previews or promos precede it.

Harriet is a period movie, but everything about its look is 21st century. Shot on digital, the film is dazzlingly crisp and gorgeously lush, and the 1080p/AVC MPEG-4 transfer makes this inspiring drama an immersive experience. The pristine image sports exceptional contrast and clarity as it brings the verdant countryside, rustic and ornate interiors, and 19th century costumes to brilliant life. Colors are vibrant and deeply saturated, textures pop, and close-ups highlight pores, scars, hair, and facial blemishes with astonishing sharpness. Black levels are rich and deep, whites are bright, and shadow delineation is quite good. My only criticism might be that this transfer looks almost too good, if that's possible. The silky smooth presentation is a bit at odds with the gritty historical story. At times, the glorious imagery softens the tale's harsher aspects and calls attention to the fact that we're watching a movie. Yet from a purely aesthetic and technical standpoint, this is one of the most beautiful Blu-ray transfers I've seen in some time.

The DTS-HD Master Audio 7.1 track matches the perfection of the video presentation. Rarely have I heard so much surround activity during a straight dramatic picture. From the get-go, the rear speakers chime in with almost constant atmospheric and ambient effects and bits of scoring that greatly enhance the viewing experience by putting us in the thick of the action. From birds and buzzards to rain and rushing rivers, every subtlety comes through crisply and cleanly. The majestic music score beautifully fills the room, and a wide dynamic scale embraces all of its highs and lows without a hint of distortion. Potent bass frequencies supply appropriate, intermittent heft to the track, and all the dialogue is well prioritized and easy to comprehend. The film's Oscar-nominated song, "Stand Up," which plays over the end credits, also sounds great and is worth hearing through its conclusion. This active, terrifically mixed track adds a lot to the film and should please audiophiles with its precision and fidelity.

Several supplements add context and perspective to the film.

Cynthia Erivo's bravura performance distinguishes Harriet, but it's not quite enough to make this heartfelt salute to one of America's bravest and most admirable heroes a must-see movie. Though beautifully filmed and well-acted, writer-director Kasi Lemmons' biopic of slave liberator Harriet Tubman often adopts an overly melodramatic tone that makes us question the veracity of some of the depicted events. A better script focusing more on Harriet's experiences with the Underground Railroad and less on her personal journey might have made the film more meaningful and historically relevant. Universal's Blu-ray presentation, however, hits a home run, thanks to a stunning video transfer, exceptional audio, and a few good supplements. Harriet has its heart in the right place, but emotion alone can't sustain this take on Tubman's inspiring story, which is worth a look for Erivo's Oscar-nominated portrayal.

Sale Price 13.97
List Price 19.98
Buy Now
3rd Party 49.88
In Stock.
See what people are saying about this story or others
See Comments in Forum
Previous Next
Pre-Orders
Tomorrow's latest releases