Motherless Brooklyn centers on a detective with Tourette's syndrome in the 1950s who is trying to solve the murder of his best friend and boss against a jazzy-noir backdrop where a businessman is trying to scam the poor residents in Harlem. Edward Norton sits in four different chairs with this production and was a passion project for him and it shows, but with several major flaws, including its overwhelming run-time bog this film down. Still, there is a good 1080p HD video transfer, a great DTS-HD MA 5.1 audio mix, and a couple of decent bonus features, including a must-listen audio commentary track. Recommended! 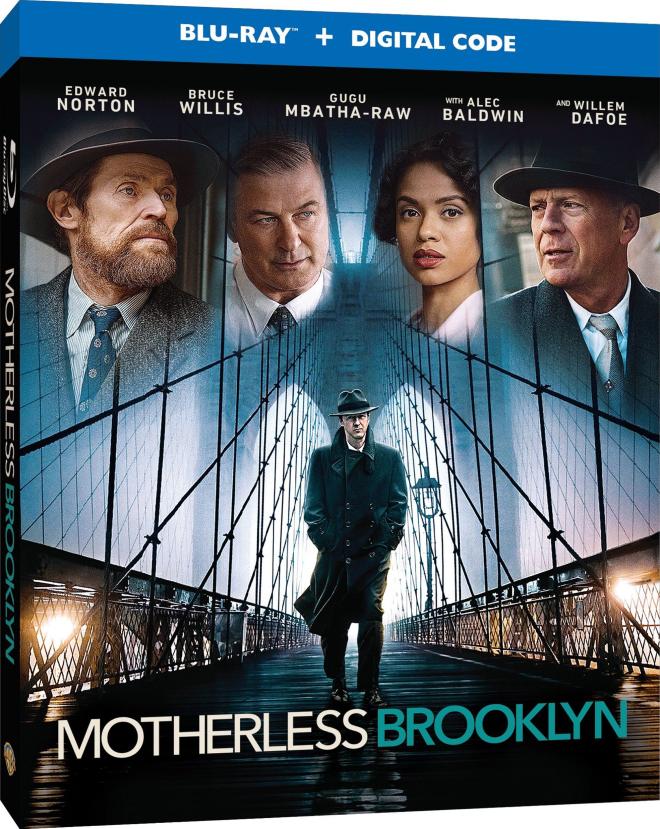 Has it really been two decades since Edward Norton sat behind the camera and directed a film? The previous production Norton directed was the light-hearted romantic comedy Keeping the Faith back at the turn of the century. It was way back in 1999 when Norton read the Jonathan Lethem book, Motherless Brooklyn captured the attention of the actor, who has been trying to adapt it over the years. Cut to present day and the film Motherless Brooklyn is out with Norton wearing four different hats - director, writer, producer, and lead actor in a film where he plays a private detective with Tourette Syndrome that is trying to solve the murder case of his friend and mentor. It's a wonderful and thrilling story on paper, but Norton added his own side-plots and flair that made this adaptation a 150-minute bloated tale that is too slow to keep any interest.

Motherless Brooklyn takes place in 1950's New York with a noir backdrop, which is one of the liberties Norton took to the original novel that took place in the present day. Lionel (Norton) is a sweet and great detective, but turns off people due to his condition, despite him having an incredible photographic memory. His boss and best friend Frank (Bruce Willis) is on top of a secret case where he is murdered. This leads to Lionel and the other detectives to help solve the crime by weaving in and out of the seedy big city.

If the film more or less stuck with this idea and plot and shaved 30-45 minutes off the run-time, there would be award consideration across the board. In addition to this murder, there is a man named Moses Randolph (based off the real-life sinister city planner Robert Moses), who is developing a scheme to turn over the low-income housing in Harlem to serve the wealthy, elite people of New York. Alec Baldwin plays this scummy villain perfectly, where you can see the Donald Trump similarities. Also in the mix is a young lawyer, family issues, and a great trumpet player, mostly taking place in a cool jazz club with excellent music lining every frame. The upsetting part of this is that most of the scenes either don't further the story and just seem to exist as filler or to showcase the aesthetic value of 1950's New York.

The script goes off on many tangents, mostly never concluding with any real resolution with the exception of the main story arc. In Motherless Brooklyn's case, less would have been a lot more. It's clear that people love working with Norton as there is no shortage of A-List stars on tap here, including Willis, Baldwin, Willem Dafoe, Michael Kenneth Willaims, Gugu Mbatha-Raw, Bobby Cannavale, and even Fisher Stevens, but it's unfortunate that most of them don't have more than a couple of minutes of screen time for their characters to actually resonate and mean something.

Norton spent a lot of time with this project and you can tell the love and passion he had for the amount of detail and work that went into this, but the final product is an overly long and dull movie that is ultimately forgettable, besides Norton's performance. Motherless Brooklyn has all the qualities of an award-winning picture, but its director's fandom for the source material and own input got in the way.

Motherless Brooklyn snoops its way to Blu-ray from Warner Bros. with a Blu-ray Disc and Digital Copy. The lone disc is housed in a hard, blue plastic case featuring the wonderful artwork of the film, consisting of the key characters of the movie. 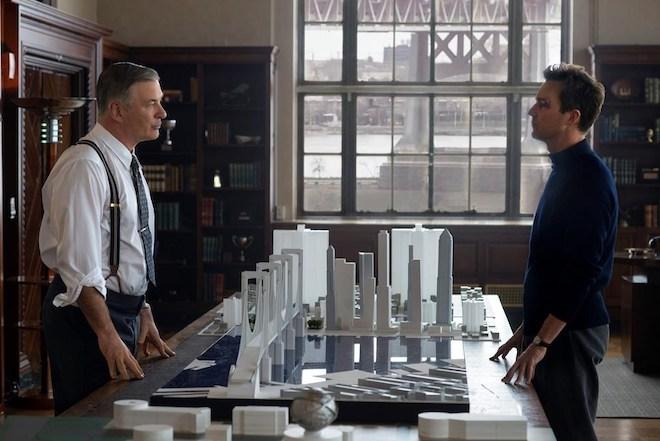 Motherless Brooklyn investigates its way to Blu-ray with a 1080p HD transfer in 1.85:1 aspect ratio. With its 1950's noir look, the detail and color palette looks great in its stylistic decisions.

The color palette is a little restrained throughout with a cooler look that enhances the blues, browns, and green colors of New York. Each city building, old vehicle, and rare tree lining the sidewalk looks good, but I wouldn't say it pops off the screen. Those bolder colors are left to the more vibrant reds and oranges that shine from the neon-lit signage on every street corner. It's a great contrast to the somewhat mundane noir thriller at hand. Black levels are usually inky with no crush during night time sequences near the stone bridges that connect the islands. Skin tones are also natural too.

The detail is sharp and vivid that reveals the fine elements in closeups as well as the background of the changing city. Individual hairs on the actor's heads and faces, along with their makeup blemishes, wrinkles, and even subtle wounds look wonderful. The period clothing with large threads of wool and cotton can be easily seen too. Even the brass instruments in the night club have a phenomenal shine and metallic look to it. Brick and stone buildings show their decay perfectly in the background as well. Lastly, there are no major video problems here, despite some very minor banding in a couple of lower lit scenes. 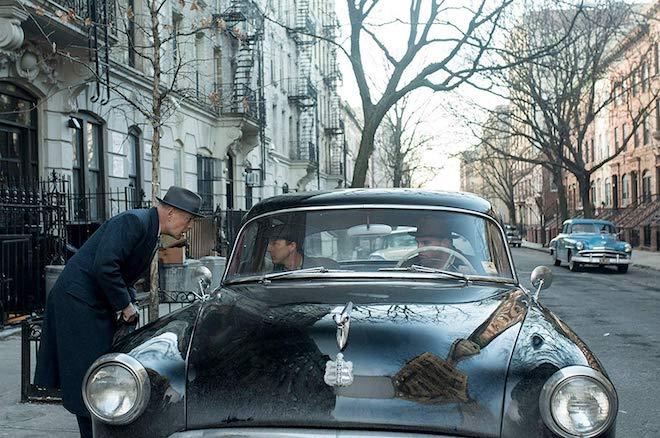 This release has an exciting lossless DTS-HD MA 5.1 audio track that is thick with music and ambient noises of New York. Sound effects are robust in the more thrilling sequences, including a car chase where you can hear the car engine's roaring and tire screeches. Even a big thunderstorm at the beginning of the film brings in a great low-end of bass that has a nice rumble to it and brings rain into the rear speakers.

The real highlight of the audio mix is the superb music that comes from Thom Yorke, Flea, and Wynton Marsalis to name a few. Their attention to detail with the noir and jazz feel is something to behold where each note resonates with the right tone and balance. Lastly, the dialogue is cleanly rendered with good directionality and free of any audio issues. 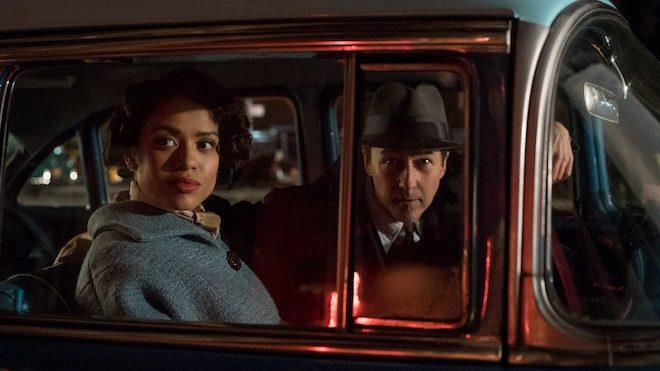 There is 16 minutes worth of bonus features included on this disc, as well as an exceptional commentary track. In fact, watching the film with the commentary is the best way to watch this movie. 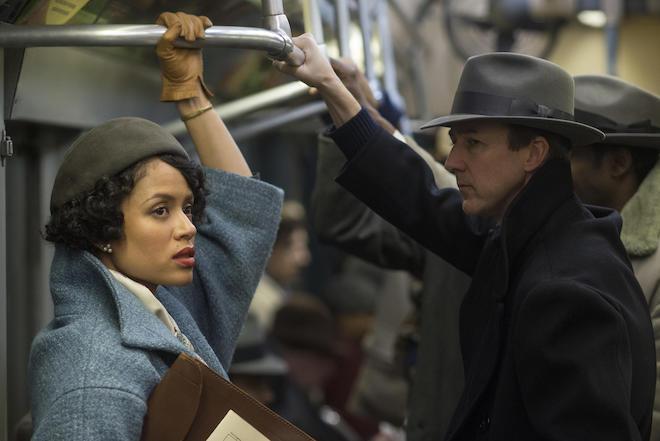 Motherless Brooklyn has an extraordinary story at its core and a spectacular cast with some stellar performances, including Norton's character with Tourette Syndrome. It's just too bad that the film is overinflated with unnecessary elements and scenes that overstays its 2.5-hour welcome. Still, there is a good video presentation, an even better audio track, and one sensational commentary track. For that reason alone, this one comes Recommended!

Sale Price 9.99
List Price 14.97
Buy Now
3rd Party 3.99
In stock on May 23, 2021. Order it now.
See what people are saying about this story or others
See Comments in Forum
Previous Next
Pre-Orders
Tomorrow's latest releases