Bong Joon-ho's black comedy Parasite is a masterfully-told allegory with deeper insights lurking beneath the surface inviting further study and conversation. The thriller finds a home on Blu-ray furnished with a gorgeous, reference-quality audio and video presentation but a disappointing set of bonuses. Still, the overall package is Highly Recommended.

It seems as though 2019 has been the year of depicting contemporary class struggles and income inequality from a myriad of perspectives and film genres. Last year, audiences had their pick of challenging entertainment with cleverly, creative sociopolitical themes, from Jordan Peele's horror parable Us, the horror-comedy Ready or Not and Todd Phillips' comic-inspired psychological thriller Joker to Lorene Scafaria's biographical crime drama Hustlers and Rian Johnson's deliciously wicked whodunit Knives Out. Of those, Bong Joon-ho's Parasite is arguably the best of the lot, a black comedy rising to the level of a masterpiece — a bleakly deadpan but sophisticatedly subtle commentary that's as much a piece of art as it is wildly entertaining. Like the imagery implied in the title, the film squirms in the mind with lingering ideas and abstract impressions that welcome various interpretations.

The South Korean director of genre favorites The Host, Mother and Snowpiercer displays a great deal of restraint, as he stoically and dispassionately introduces audiences to the Kim family (Song Kang-ho, Choi Woo-shik, Park So-dam and Chang Hyae-jin). Living in literal squalor in the basement of an apartment complex where drunks freely urinate nearby, they scuttle about their own home on the hunt to leech off a neighbor's Wi-Fi, not unlike the stink bugs scurrying on their kitchen table. For good comedic measure, Bong amplifies — or perhaps, even over-emphasizes — his metaphor with a fumigator spraying pesticide chemicals in the streets and into the Kim's home. But Bong quickly subverts complaints of poor filmmaking when the son Ki-woo mystifyingly declares a scholar's rock metaphorical, a comical meta jab at the film and its themes that becomes an absurdly oddball running gag. 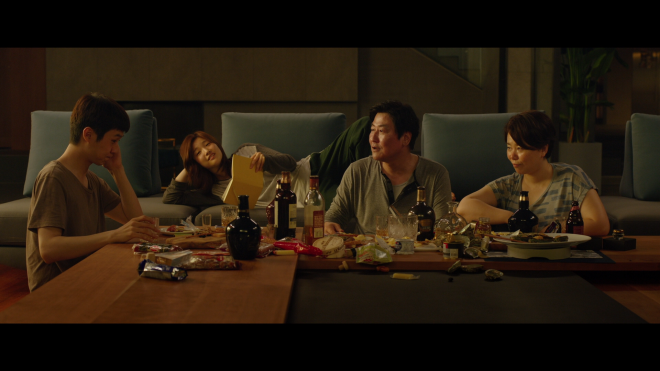 By sharp contrast, the Park family (Lee Sun-kyun, Cho Yeo-jeong, Jeong Ji-so and Jung Hyeon-jun) are the complete opposite, living in a spacious house comfortably situated in a clean, uncrowded neighborhood away from the ills and hardships of the lower class. And yet, there is something shrewdly writhing beneath the surface of this picture-perfect nuclear family, particularly in their fixation on American culture, one that reaches near fetishization. Watching the story methodically and ominously unfold, we admire Bong's meticulous camerawork only moving vertically with suggestive weightiness, seeing the Kims always descending stairs but only ascending in the company of the Parks as though with their permission. Going into the second half of Bong's masterpiece with the bizarre reveal that touches on other ideas, we're left with a much to unpack, questioning who's the real parasite in contemporary class warfare.

Universal Studios Home Entertainment brings Parasite to Blu-ray with a glossy slipcover. The Region Free, BD50 disc sits comfortably opposite a flyer for a Digital Copy, unlocking only the 1080p HD version with Dolby Digital Plus 5.1 audio. After a few skippable trailers, viewers are taken to a menu screen with the usual options, full-motion clips and music.

The dark comedy thriller squirms its way to Blu-ray with a highly-detailed, demo-worthy 1080p/AVC MPEG-4 encode, struck from a 4K digital intermediate. The freshly-minted transfer exposes every nook and cranny in both houses, showing clean, well-defined lines in Park's expensively-designed minimalist furniture whereas every grimy imperfection and filthy flaw in Kim's cramped, subterranean existence is plain to see. The lettering in various objects is clearly legible, and every blade of grass and leaf in the yard is distinct. Healthy facial complexions reveal individual pores, wrinkles and negligible blemishes.

Presented in its original 2.35:1 aspect ratio, the HD video also debuts with exceptional contrast and brightness balance, exhibiting radiantly brilliant whites and deep, inky-rich blacks to provide the image with appreciable three-dimensional quality. It's worth noting that the filmmakers intentionally shot the movie with heavy gray overtones and a near monochromatic appeal, making highlights dazzle with a crisp intensity.

Given the subject matter and genre, much of the action unfolds across a surprisingly wide and spacious soundstage. With outstanding balance and fluid movement between the three channels, imaging is continuously busy and energetic as various ambient effects convincingly bounce around in the background and into the off-screen space, exhibiting superb clarity and warmth within the mid-range. A few other atmospherics softly move into the surrounds to extend the soundscape with the noise of the city, some of the local wildlife and the downpour of the rain, generating a very subtle but highly satisfying soundfield. Vocals are always distinct and precise, allowing for clear intonation in the dialogue. The low-end is a bit reserved on the whole, but it nonetheless provides a palpable weight when required, such as during the thunderstorm sequence. (Audio Rating: 88/100)

A modern masterpiece from South Korean director Bong Joon-ho, Parasite is a wildly entertaining allegory on contemporary class struggles and income inequality. But lurking beneath the surface of this engrossingly brilliant black comedy writhes deeper layers of insightful commentary on modernity, subtly on display in the methodical, restrained hands of a talented filmmaker. The thriller finds a home on Blu-ray furnished with a gorgeous, reference-quality audio and video presentation fans will marvel at. Despite debuting with a disappointingly small set of supplements, the overall package is nonetheless highly recommended.

Sale Price 10.93
Buy Now
3rd Party 4.48
In Stock.
See what people are saying about this story or others
See Comments in Forum
Previous Next
Pre-Orders
Tomorrow's latest releases