Adopt a Highway centers on a recently released inmate named Russell (Ethan Hawke) who is trying to find his lot in this new way of life on the outside. After he finds a baby girl in a dumpster, his search for who he wants to become begins. From RLJ Entertainment, this Blu-ray is an utter bare-bones release without any extras and no digital copy. The image is a better-than-expected 1080p HD transfer with a solid DTS-HD 5.1 audio mix. Give it a Rent. 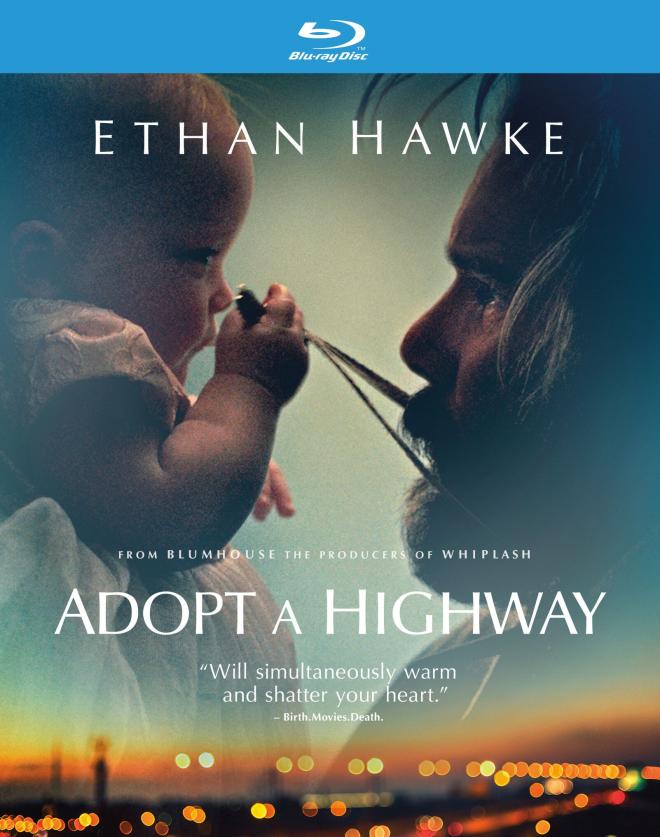 Ethan Hawke has given us a ton of nuanced performances over the years, but none have been this delicate or quiet as they are in the film Adopt a Highway, written and directed by actor Logan Marshall-Green. The centerpiece of this movie is a focused character study on a man who is looking to find his place in society, while at the same time, coming to terms with his past and who he wants to become.

Hawke plays a man named Russell who has just been released from prison after serving over twenty years for marijuana possession in his teen years, resulting from the 3-strike rule from the late 1990s. Russell is uncomfortable in his own skin. He keeps to himself, avoids others, and mostly speaks in whispers when at his restaurant job. He's not a bad guy, but being in prison for two decades has certain effects, including the lack of knowledge in technology and social skills, that would make Russell look ill-equipped to take on life on the outside.

While at the job, Russell hears a faint cry in the dumpster and upon inspection, he discovers a baby girl, left by someone with a note that reads, "Her name was Ella". That's a powerful note for many reasons, but for whoever left this baby in this retched container, didn't want her to survive, but Russell thinks differently. Partly for not wanting to ruin his parole and another part wanting to live for something in this modern world, Russell starts to take care of this baby girl and not turn her into the authorities. This is where Logan mixes a bit of comedy and real-world horror as Russell learns how and mostly fails at caring for this newborn by either letting her sleep on the edge of a bed or feeding her non-baby food, amongst other pickles that borderline that horror genre.Â After the initial shock of this unlikely pairing, Russell treks across state linesÂ to his hometown to deal with his parent's estate, both deceased while he was in the big house.

There is a lot to like with this story and its main character Russell who is the cohesive element keeping everything in line. Without him, you only have a small variety of one-scene characters who all have some sort of impact on his life. That all being said, the film plays out at a slow pace with very little excitement. Again, most of Hawke's dialogue is softly spoken. Additionally, all of the bizarre and sometimes loud characters who try and give advice all seem a tiny bit redundant and overused. It gets to a tedious point where all you want is the big payoff, which is a double-edged sword.

While Russell might have settled a few things in his life, he still hasn't found himself in any of this, which is what I think Logan was going for. Still, Ethan Hawke turns in a wonderful performance that is a bit different than what we're used to seeing, adding yet another layer to the iconic actor. Logan Marshall-Green has a fine eye behind the camera and has something to say with his script. I'm sure with a little bit of time, he's going to knock a film out of the park. With Adopt a Highway though, even with its sweet sentiment and fantastic role for Hawke, the ingredients seemed a little undercooked.

Adopt a Highway drives its way onto Blu-ray from RLJ Entertainment with a 1080p transfer. The lone disc is housed in a hard, blue plastic case with a cardboard sleeve, featuring Hawke and the baby. 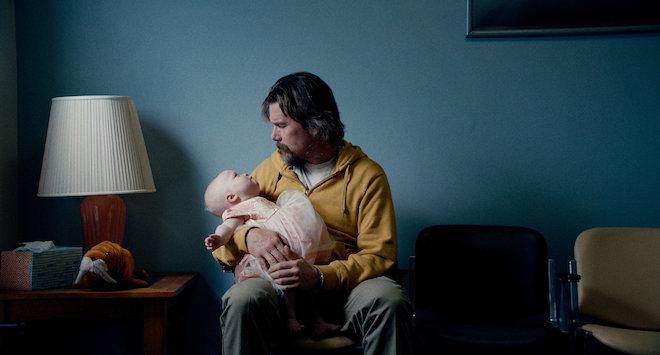 Adopt a Highway is up for parole on a 1080p HD transfer from RLJ Entertainment that features strong detail and a great color palette from start to finish.

Despite its low budget, this is a top-notch video presentation, keeping true to its nature and tone. Colors are realistic and tonally correct with this melancholy atmosphere. We get the icy cool grays and silvers of the prison life, but when Russell is out on his journey, there are luscious landscapes full of orange, brown, and green surroundings that signify life, with some excellent blue skies. To stand out, Russell wears a bright yellow hoodie and even works at a restaurant with a bright red and yellow neon sign that has an excellent glow to it. Even the baby's pink dress looks well-balanced in each lighting condition. Black levels are deep and inky without major crush. Skin tones are remarkably natural too.

The detail is vivid and sharp, even in low-lit sequences that highlight the facial stubble on Hawke right out of jail, transitioning nicely to a full bushy beard where each strand can be seen easily. The textured lace in the infant dress looks good while the heaven woven fabric in the hoodie stands out. Wider shots showcase structure details in buildings and wild pastures on the horizon, never looking flat. Lastly, there were no big issues with banding, aliasing, or video noise. 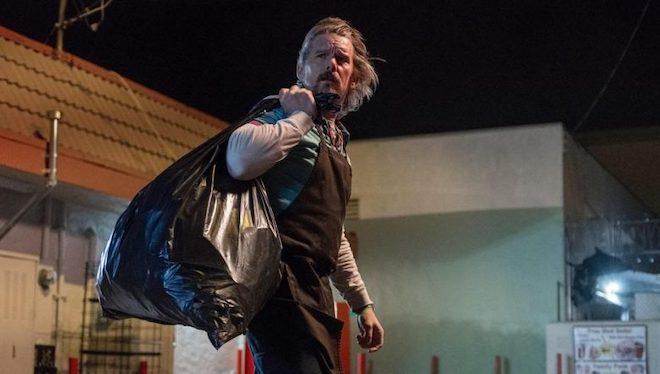 This release delivers a lossless DTS-HD MA 5.1 audio track that doesn't gift you any explosions of hundreds of bullets flying by, but rather relies on the simple sounds of a quiet life on the road.

Most of the track is situated on the front speakers with some robust sound effects chiming in when they need to. Automobiles starting up, a large bus driving across the country, and public spaces all give way to some natural-sounding environments. The bigger sounds usually come to life when the music of the film is in play and during inclement weather where the surround speakers pick up the slack.

Dialogue is crystal clear and easy to follow along if you adjust the volume a tiny bit to hear Hawke's soft voice better. There were no audio issues to speak of either. 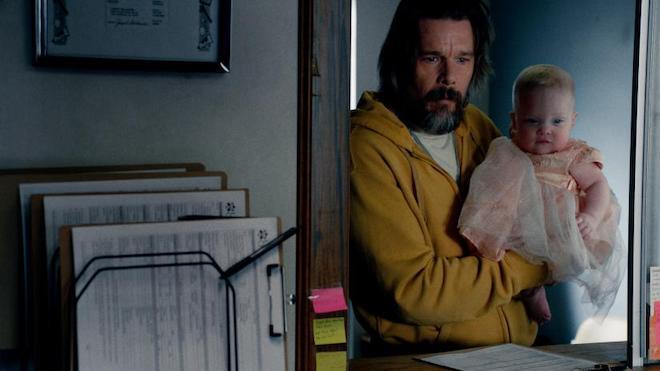 This is a true bare-bones release with zero bonus features. 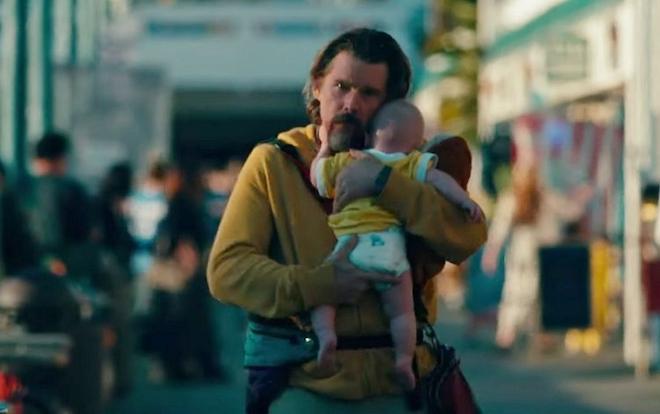 Adopt a Highway is a decent first outing in the director's chair for Logan Marshall-Green. It has an emotional story anchored by one amazing performance by Ethan Hawke. I just don't think it finished what it was trying to say in the end. The 1080p HD transfer was astonishing for being such a low budget flick and the DTS-HD 5.1 mix sounds good as well. Unfortunately, there are no bonus features with this Blu-ray and no inclusion of a digital copy. With this film not being something that is watched consistently and with no added perks, this is a Rental.