They're creepy and kooky, somewhat mysterious, maybe a little spooky - The Addams Family are back on the big screen - animated for kiddo-friendly entertainment with delightfully dark witty humor. As the darkest family on the block tries to find a place to call home, they must contend with the foulest, most demented creature known to humankind - a home renovation T.V. host! Universal delivers a fresh and eye-popping pleasing Blu-ray with a terror-ific audio mix. Bonus features may not be numerous but they're interesting. If you've got youngsters in the room, this is pretty solid stuff. Worth A Look.

All Gomez (Oscar Isaac) and Morticia Addams (Charlize Theron) want is to have a place to call home. After being chased away on their wedding night, the family settles in the last place anyone wants to live - New Jersey. For thirteen years they've lived peacefully. On the eve of a major family reunion to celebrate Pugsley's (Finn Wolfhard) coming of age performance, the Addams' and Uncle Fester (Nick Kroll) will have to contend with the perfection-focused home renovation reality T.V. star Margaux (Allison Janney). As the family's but heads, Wednesday (Chloë Grace Moretz) longs to fit in at school. 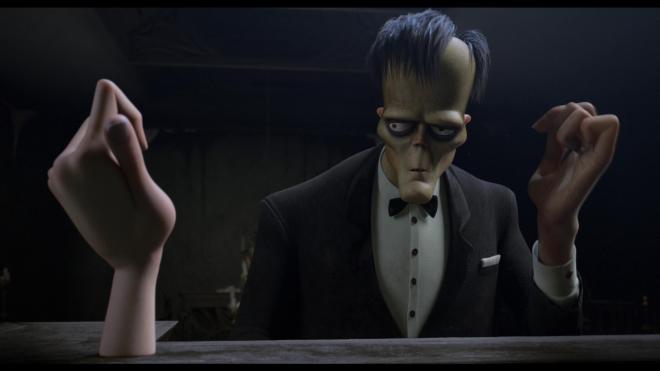 Casting the digital animation towards the original stylings of Charles Addams' cartoons, The Addams Family tries to be all things at once. Reverent to the original newspaper comics, referential to the classic television series, with undertones f the delightfully demented live-action movies from the 1990s. For the most part, this show succeeds. The voice cast that also includes Martin Short, Catherine O'Hara, Bette Midler, and a small but hilarious turn from Snoop Dogg as Cousin It, a lot of this movie is a perfect companion piece to the films, comics, and television shows that came before. The humor is sharp and in the truly dark spirit of The Addams Family.

The problem for the film starts about twenty-five minutes into the show when the A-Plot about Allison Janney's Margaux Needler kicks in. On the surface, a conformist trend-driven reality TV host would be the perfect enemy for our titular family. It's the irksome presentation of the character as so on the nose with the hammered hard message of "conformity sucks" that bogs this movie down into the marshes. At the outset the movie had a pretty great joke ratio, maybe two out of every three landed and gave a great laugh. Once the main story starts and the film starts to lose it's biting sense of satire, it ambles to a rough one in five. At best.

However, I do have to admit that I, a 37-year-old man who grew up watching the black and white television series am not the target audience. And I honestly can say that even the original show wasn't meant for me as I didn't get it half the time and only really appreciated it later in life. This animated film is absolutely intended for the kiddos. As such a lot of the humor is boiled down to their understanding. If the kid in question is used to seeing mommy fervently watching B.S. HGTV shows whilst imbibing copious amounts of wine (boxed or otherwise), these jokes land.

It may not be the ideal return of The Addams Family - even narrow humor set aside - I did enjoy the show. At 87-minutes it doesn't last long enough to be intrusive or a slog to sit through. Even as an adult there is still plenty of devilishly dark humor on hand to keep Mom and Dad entertained. Considering the voice cast, I would have loved to see these actors take on live-action versions of their counterparts, Oscar Isaac and Charlize Theron are perfect Gomez and Morticia. Even Nick Kroll delivers an entertaining Uncle Fester and Bette Midler was a fine Grandma that felt like a callback to her Hocus Pocus era. The movie may not be perfect, but it's far away from being a disaster. It's fun most of the time and I'm sure the youngsters in the room will be snapping their fingers to a familiar beat in no time. I waffle between a 3/5 and a 3.5/5 - certainly better than the average but not by a whole lot.

The Addams Family arrives on Blu-ray thanks to Universal Pictures in a two-disc Blu-ray + DVD + Digital set. The discs are housed in a standard two-disc sturdy case with identical slipcover artwork. Pressed on a BD-50 disc, the disc loads to trailers for other Universal releases before arriving at an animated main menu with easy access to the bonus features on the right side of the screen. The included Digital code is redeemable only through iTunes and is not Movies Anywhere compatible and does port to other outlets.

The Addams Family enjoys a ghoulishly pleasing 1080p 1.85:1 transfer. I don't know the final digital intermediate resolution, but I was very impressed with the overall clarity of the image, the clean lines, and how well everything blended together here. For such stylized characters, the details in the faces, clothing, and the Addams' home is nicely textural. Colors run the spectrum allowing for the murky blacks, greens, putrid yellows, and crimson reds to dominate the screen. It's great to compare the colors of the "normal" world against the Addams' lifestyle. When Wednesday goes to school I loved how her very black and white nature clashes with the 50s/60s pastels. While this is an overall great looking presentation, there are a couple of moments of compression artifacts with some banding and there are a couple of moments where lines lose their clean edges and become a tad crunchy. They're brief moments and not alto distracting but they're present just the same. Otherwise, this show is practically picture perfect.

While released theatrically with Dolby Atmos, this Blu-ray release of The Addams Family arrives with an impressive in its own right DTS-HD MA 7.1 audio mix. When the Addams discover the abandoned insane asylum and that first guttural "GET OUTTTT!!!" erupts from the surrounds - you're in for a sonic treat. There are tons of great atmospheric elements here to keep the surrounds engaged while adding dimension to the settings. Action moments like Pugsley riding a rocket is engaging material but then a more subtle effect of a bunch of reanimated dead frogs hopping and plopping fills the space with pin-point placement creating a fun laugh in the process for one of the movies more ridiculous moments. Dialog is clean and clear throughout and the scoring by Mychael Danna and Jeff Danna keeps up the playful energy and dropping in enough theme notes to remind you yes you are watching an Addams Family movie.

In total there's barely an hour of bonus features dedicated to The Addams Family. While that's not a lot, the material is worth digging through. The deleted/extended scenes offer a couple of gags that were wise cuts but still kinda funny. Some of the behind the scenes material is a bit EPK heavy but even in their brief form offer some decent content.

While The Addams Family wasn't the picture-perfect reintroduction of the characters to a new generation, it's a pretty decent one. Squarely aimed at entertaining the younger audiences in the room, there's enough fun for the older set to enjoy but die-hard purist fans of the show aren't catered to. There are references and nods but most of the jokes are aimed a bit lower. Universal Pictures delivers a technically first-rate Blu-ray of The Addams Family with a lively and colorful transfer and arousing and engaging audio mix. Bonus features are thin but worth watching. It's not for everyone but I'd be lying if I said it didn't entertain me. At the very least I'm calling it Worth A Look. I'm fairly confident most folks out there will get a kick out of this one.

Sale Price 12.99
List Price 19.98
Buy Now
3rd Party 8.99
In Stock.
See what people are saying about this story or others
See Comments in Forum
Previous Next
Pre-Orders
Tomorrow's latest releases