Overview - A gang called The Warriors are framed for killing a gang leader trying to unite all the gangs in the area. With other gangs gunning for them they must get back to the home turf of Coney Island... Alive.
OVERALL
Recommended 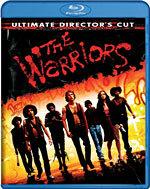 'The Warriors' may be the only movie with a poster that's as notorious as the film it promoted. The image is now a classic -- a shot of a thousand gang members under a tagline that reads, "These are the Armies of The Night. They are 100,000 strong. They outnumber the cops five to one. They could run New York City." The resulting uproar over what effect the poster might have on impressionable young adults was so strong that the one-sheet would ultimately be pulled by Paramount, and replaced by a new poster that simply had the words "The Warriors" spray-painted on a subway wall.

Upon its original release in 1979, the film itself was no less controversial. Its mix of stylized mayhem, coarse language and seemingly wanton disregard for authority made it not just infamous, but downright dangerous. Violence broke out in a number of urban cinemas showing the movie, inciting the Moral Majority to call for the heads of the powers that be in Hollywood. All this for an essentially silly movie about gang members in funny costumes, hitting each other with plastic baseball bats. Ah, the good old days...

'The Warriors: The Ultimate Director's Cut' begins with a prologue informing us that what we are about to see is a retelling of classic Greek myth Anabasis, only updated to modern times. When prophet Cyrus (Roger Hill) calls all of the gangs of New York to a meeting in Central Park, it seems peace may at last be restored to the city's warn-torn streets. That is, until Cyrus is killed by the psychopathic Luther (David Patrick Kelly), who then frames one of the city's gangs -- the Warriors -- for the murder.

What follows for the Warriors is all-night, cross-city trek back to their home base in Coney Island. Along the way, an unlikely leader of the pack named Swan (Michael Beck) will emerge, guiding our anti-heroes through a series of misadventures and battles with rival gangs. Also on board for the ride is a local prostitute, Mercy (Deborah Van Valkenburgh), whose big mouth only serves to get the Warriors into more trouble. Can the gang make it back to Coney Island alive, save their reputation, and bring Luther to justice?

Watching it today, 'The Warriors' is, of course, horribly dated. The music, the clothes, the dialogue -- if any of these silly gang members with their painted faces and Xanadu hair were to walk the streets of New York today they'd almost surely get their asses whupped in thirty seconds. But that's what's so much fun about revisiting the film three decades on -- its cynical, world-weary attitude that at one time seemed so dangerous, now seems quaint and nostalgic. It's like watching a bunch of videogame characters bopping their way through an animated, stylized two-dimensional world, complete with a cheesy Casio synth-rock soundtrack.

The passage of time also allows us to better appreciate director Walter Hill's thematic goals for the film. With 'The Warriors' now impossible to take seriously as some sort of subversive call to violent rebellion, it can be seen as the stylized fantasy it was always intended to be.

It's worth noting that this Blu-ray edition of 'The Warriors' presents the 'Ultimate Director's Cut' of the film, which was originally released to DVD in 2005. Only about a minute longer than the original theatrical cut of the film, this edition includes several newly-animated transitional elements, in addition to the aforementioned prologue, all designed by Hill to drive home the point that 'The Warriors' was never intended to present a documentary realism. 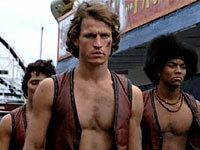 The original theatrical version of 'The Warriors' first hit DVD in the late '90s as a bare-bones disc release. I thought that transfer was quite good for a catalog title, but Paramount's 2003 'Ultimate Director's Cut' remaster was even better. Now, we have two high-def versions, with the studio re-issuing the film on both Blu-ray and HD DVD simultaneously. Happily, both high-def editions (each presented in 1080p/AVC MPEG-4) are truly excellent -- it's rare that I see a thirty year-old film that looks this darn good.

The source has been cleaned up impressively -- just about every speck of dirt has been swept away, for a very slick, smooth look. Even the darkest scenes don't suffer from heavy grain, which is rare for a film of this vintage. Blacks are uniformly excellent, and contrast consistent -- the film really enjoys a newfound sense of depth and detail lacking in previous standard-def versions.

Colors are also superior, with a nice and vivid look that avoids any smearing or noticeable noise. Fleshtones, too, are surprisingly good -- gone is most of the pale, pink skin that marred the first DVD and certainly the horrid old VHS tape. Granted, 'The Warriors' still has a more natural use of light without a lot of the post-production processing common to a modern release, so detail and depth can flatten out in the shadows. Still, impressively for a title this old, fine texture is visible in even the darkest scenes, and black crush is not too harsh. To be sure, 'The Warriors' won't ever rival a fresh new release in picture quality, nor will it serve as the ultimate in high-def demo material, but for what it is, it's pretty awesome.

Though not as impressive as the video, the remastered Dolby Digital 5.1 track included here for 'The Warriors' isn't bad at all. While I must once again lament Paramount's decision to favor the HD DVD with a 1.5mbps encode (versus 640kbps for the Blu-ray), in this case it doesn't really matter, as the original source is just too limited to benefit much from a higher bitrate and I couldn't discern any audible difference between the two tracks.

As such, both tracks share the same set of plusses and minuses. On the good side, dynamics are quite healthy for a flick this old. Low bass certainly doesn't rival 'Casino Royale,' but it has enough punch to keep the energy level up. I was also impressed by how clean the high-end is -- gone are the hiss and flatness that so marred old video versions. Dialogue is also clear, and I didn't have any trouble understanding any of the New Yawk accents.

On the not-so-good side, the mix is still very front-directed. Rears are all but silent -- in fact, save for some obvious, digitally-processed whooshes (such as during the opening credit sequence) this may as well be a stereo mix. At least stereo separation is fairly wide, with clean pans between channels. 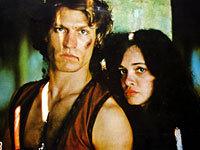 'The Warriors' comes to high-def with the same extras as the 2005 standard-def 'Ultimate Directors Cut' release, and this is a straightforward but very informative package.

Since Walter Hill doesn't do audio commentaries, none are included here. Instead, famed documentarian Laurent Bouzereau (producer of choice for most Steven Spielberg and Alfred Hitchcock classics, among hundreds of others) was corralled to produce a new four-part overview of 'The Warriors.' Simple and lacking in flash, this one still delivers where it counts -- content.

There are four parts to the 62-minute doc. "The Beginning" (15 min.) chronicles the development through casting; "Battleground" (16 min.) covers the production and New York location shooting; "The Way Home" (18 min.) takes an in-depth look at the film's climax and its stylized violence and costumes; and "The Phenomenon" wraps it all up with some discussion of the film's legacy and parting thoughts from cast and crew.

As presented, the doc is quite thorough, and really benefits from a great cross-section of participants, including fresh interviews with Hill, producers Larry Gordon and Frank Marshall, castmembers Michael Beck, David Harris, James Remar, David Patrick Kelly and Deborah Van Valkenburgh, plus some key members of the tech crew. All are well-spoken and passionate about their involvement, citing very specific and memorable on-set stories as well as favorite scenes. Hill also provides some reasoning behind the animated additions to the 'Ultimate Director's Cut.' The only disappointment is that there is some talk about a whole deleted subplot involving a secondary character that was Mercy's original love interest -- unfortunately there are no deleted scenes on the disc, and our only glimpse of the material comes through some very brief stills. Still, this doc is aces.

The only other extra included is the aforementioned Theatrical Trailer, presented here in full high-def resolution. (Note that all of the documentary material is in 480p/MPEG-2 only. Bummer.)

'The Warriors' is an action-packed time capsule from a more innocent time when feathered-haired guys wearing burgundy leather vests could still be considered dangerous. It's still a great, high-octane ride, with a surprising amount of depth if you can see past its dated exterior. Paramount has done a fine job with this Blu-ray release -- particularly the excellent video transfer. Granted, the audio is a bit more limited, but an excellent documentary helps ease the pain. This one is well recommended for any fan of gritty '70s flicks, street gangs or bad fashion.

Sale Price 36.01
Buy Now
3rd Party 9.71
In Stock.
See what people are saying about this story or others
See Comments in Forum
Previous Next
Pre-Orders
Tomorrow's latest releases