The Wizard is a nostalgic film from 1989 that is part advertisement for the Nintendo gaming system and part family drama-adventure that follows three kids on a road trip to play in the national video game championship while confronting their demons in their past. The new 1080p HD transfer and DTS-HD stereo audio track are something special along with some of the best bonus features to be placed on a home video release. Must-Own! 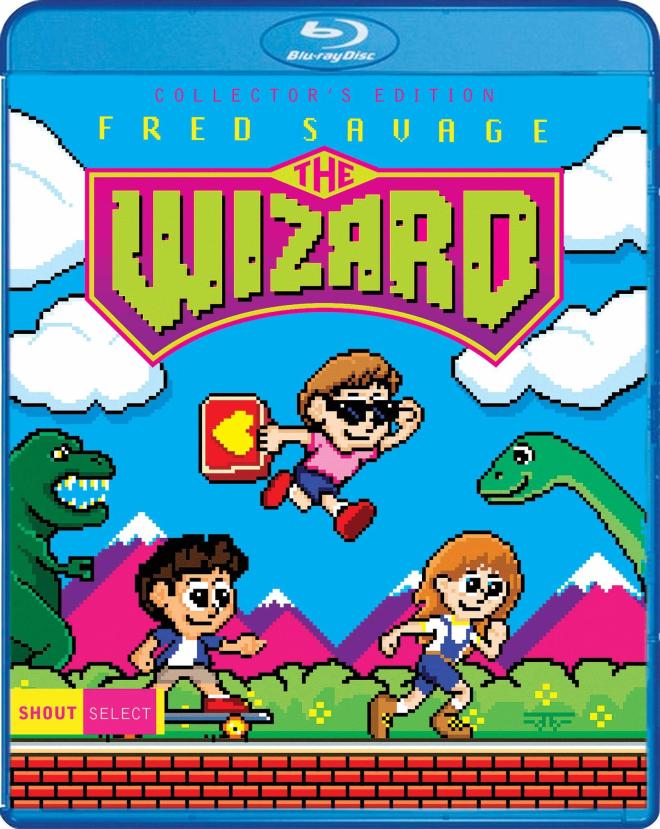 Mostly known for being a feature-length advertisement for Nintendo in the late 1980s, The Wizard has a lot more underneath its video game surface than it lets on. With a ton of gameplay and Nintendo hardware in each scene, the film navigates its way down a cross country trek with three kids, including a young Fred Savage and Jenny Lewis with their young friend in tow to attend a Nintendo game contest for the chance to win a large sum of money. After the story is set in motion, the film reveals the real emotions of loss, death, family trauma, divorce, and more that make The Wizard a top tier motion picture, despite its blatant and rampant product placement of the once-famous gaming console.

Directed by Todd Holland (Kippendorf's Tribe, The Larry Sanders Show) and with cinematography by Robert D. Yeoman (all of Wes Anderson's film from Bottle Rocket to The Grand Budapest Hotel), this relatively small budget film had some fantastic talent behind it for 1989 and gets by with its stunning and engaging performances from Savage, Lewis, Beau Bridges, and Christian Slater, along with its melodramatic undertone that works well with the wonderful world of video games.

The Wizard focuses on a young kid named Jimmy who has suffered major trauma and is holed up in a state institution. Jimmy consistently tries to nonchalantly escape his situation but is always caught, but one day, his half brother Corey (Savage), breaks him out one day and run away from home to make it to California. Corey realizes that Jimmy is a video game genius and can beat any game easily, which the two take on the road, hustling people across the country for money as they cross paths with a young girl named Haley (Lewis), who helps them on their plight to the West coast.

Meanwhile, the two brother's father (Bridges) and older brother (Slater) are looking for the runaways along with a violent and. sadistic bounty hunter. For most of the movie, the story is a rinse and repeat sequence of moments of the trio challenging would-be video game champions in a variety of places for money, only to lose their monetary gains shortly thereafter, while dodging law enforcement. The heart of the story lies within each of these kid's backgrounds and past as it catches up to them. Someone close to Jimmy had passed away, Corey's family life had a turbulent split, and Haley's parents left her abandoned when she was young.

The film intelligently weaves these serious moments in and out of the constant product placement of Nintendo, while hinting at a message that video games can be an escape from real life, a form of bonding with a loved one, and virtual adventure that helps find one's self. On the other side of this message are all of the cool never-before-seen technology and video games that popped up. From debuting the infamous Power Glove to revealing Super Mario Bros. 3, The Wizard was a major Hollywood feature-length film that promoted all things Nintendo, which was unarguably the biggest entertainment source in the late 1980s.

The performances from everyone involved were excellent and one of the main factors in crossing the two genres together, where Savage and Lewis perfectly captured young teenagers trying to keep it together away from home. There's a lot to like with The Wizard some 30 years later and is a nostalgic blast from the past.

The Wizard gains an extra life in the Blu-ray playing field from Shout! Factory in a 2-Disc Blu-ray set. The discs are housed in a hard, blue plastic case. There is no digital copy here, but there is a cardboard sleeve that features brand new artwork of some excellent 8-bit video game art of the film. This is probably the best-looking artwork for a Blu-ray in a long time. 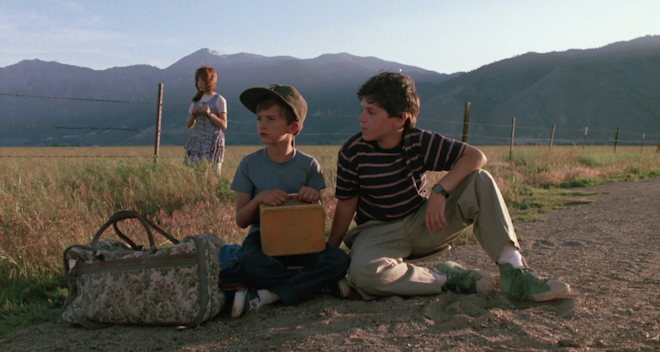 The Wizard downloads itself to Blu-ray from Shout! Factory in a 1080p HD transfer with an aspect ratio of 1.85:1. This 1989 film has a brand new 4K transfer and is a giant leap forward and improvement from the previous 2018 release on Blu-ray.

Two years ago The Wizard was released to Blu-ray with a myriad of video and audio issues. Needless to say, it didn't look good whatsoever, but the good folks over at Shout! Factory went through with a fine-tooth comb and created a phenomenal new 4K transfer that is now in 1080p and looks incredible.

The color palette is bold, rich, and full of life now. The scenes at the arcades showcase the bright neon colors in each gaming machine that mixes well with the dank muted colors of the dark walls and flooring. When arriving in California, all of the bright hyper color pastels pop nicely at the tournament. The exteriors of the road trip from the green pastures to the orange desert look remarkable now. The black levels are now deep and inky without crush and the skin tones are natural.

The detail is much more vivid and sharp, revealing excellent closeups of the actor's faces that show acne, facial pores, wrinkles on the older characters, and makeup blemishes. The Power Glove shows all of the intricate details in the textures of leather, cloth, and plastic along with some wider shots of the necessary well-worn arcade machines. There is also a fantastic layer of grain that never fluctuates and looks smooth and natural. Lastly, there are no major video problems to speak of, other than one sequence that lasts a few seconds where the source material was added for a necessary edit. 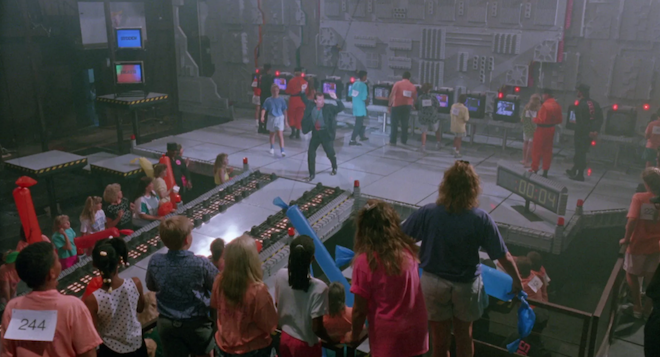 The Wizard comes with a DTS-HD MA 2.0 stereo audio track that does a decent job conveying the audio elements throughout the film, although a 5.1 option would be better.

Sound effects of a sequence through a Disney theme park, along with a ton of noises of video games and arcade rooms all sound good, but never overbearing. There is no low end of bass to give a nice sense of depth and rumble to any of the action sequences, but there are some quality nuances quieter moments.

The biggest sounding scenes are at arcades and at the video game championship where the soundtrack utilizes the atmospheric cheers, video game effects, and dialogue well. There is a pop score to accompany the time period as well. Dialogue is always clean and clear and free of any audio issues. 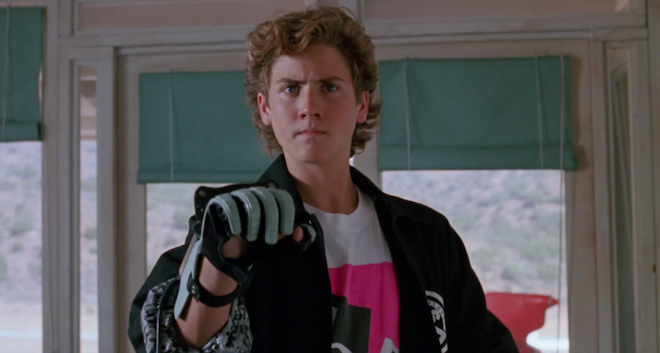 There is around 193 minutes full of new bonus material included here, as well as a feature-length commentary track with the director. Needless to say, Shout! Factory outdid themselves with the extras here, that feature brand new present-day interviews with the cast and crew, an analysis of the film by experts, and a couple of Q&As with fans at special screenings. 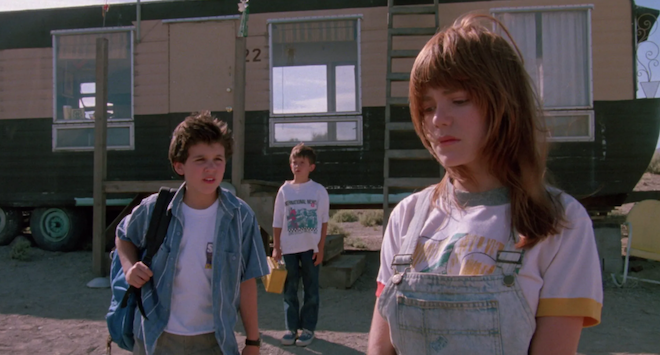 The Wizard is an entertaining look back on video game culture when Nintendo was on top of the gaming world. While one aspect might put this film in the blatant advertisement realm for one video game system, but underneath that surface is a melancholic yet redeeming story about a family sticking together and coming to terms with the past. It's still a great movie three decades later. The video and audio presentations are both top-notch and the bonus features are out of this world. MUST-OWN!