Harry Warden returns with his pickax blood lust in Scream Factory's two-disc release of My Bloody Valentine. This classic piece of Canuck Horror glimmers with a new 4K scan of the original camera elements with both the theatrical and extended uncut version of the film. In true Collector's Edition fashion the set is loaded with great bonus features. Fans tired of paying premium prices for the OOP 2009 disc have something to give themselves this Valentine's Day! Recommended.

Hot on the heels of a swath of holiday-themed horror features, Canada tried to claim Valentine's Day for themselves. In the sleepy mountain town of Valentine Bluff, the heart-felt candy-infused Valentine's Day holiday has been absent for nearly two decades. Harry Warden made sure of that by taking his revenge for a horrible mining accident against those he felt responsible. 20 years later the town is trying to move on and celebrate with the young folk eager to get in on the romantic action - but someone has other plans. When the town starts to get ready for the big dance celebration, someone is making sure people don't line up for the fun. Ripping out hearts left and right, it would appear Harry Warden has returned - and no one is safe! 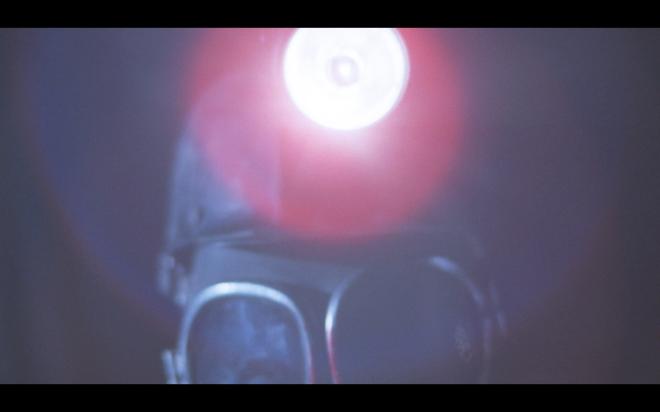 While My Bloody Valentine doesn't offer up anything new to the slasher genre - it checks off the prescribed boxes effectively enough. Solid gore, a creepy killer, creative deaths, and enough plot so that the film stands on its own two legs without falling over. There are enough annoying characters for you to cheer during their untimely exits and enough interesting leads to keep you invested in their fate. No one in their right mind would think a party deep in the town's mine would be a good idea - but then you wouldn't have the setup for one hell of a slasher sequence!

Much of My Bloody Valentine has that appreciable charm of "working with what you got." It's certainly not the most expensive movie ever made. Made on a small budget - part of which was taxpayer-funded - the film makes miles out of yards. At a brisk 90/93-minute runtime, the film gets in and gets out without waste. We get to know the main players and their motivations. We get it the sheriff and the owner of the mine want to move on, but we also understand why they're on edge. Much of the film plays similar plot beats as Prom Night allowing for a holiday or a party to serve as the perfect setting for creative mass carnage by a long-ago forgotten killer. Even with its horror holiday slasher brethren, I give a lot of credit to My Bloody Valentine for giving the murderer a genuine motive. With every box of candy comes a cryptic message - and a recently excised heart!

If you're game for a true to form slasher classic My Bloody Valentine sticks to the basics. The biggest criticism I have is that when it comes time to identify the killer, it's a bit obvious while at the same time it doesn't fully work. For that person to pull off these elaborate murders they'd have to constantly be disappearing for long periods of time - at a party where everyone knows each other you'd think someone would notice! It's a non-twist twist that was replicated for the 3-D remake as well without any shock or surprise.

The last time I saw this original version was when I rented the now out of print Lionsgate release in 2009 just as Hollywood Video was about to go under. It was one of the last disc rentals I ever made there. As an employee at the time I got to stack up a large swath of movies and games during the closing to buy up at a huge discount - that disc was a staff favorite and I lost the bloody brutal store war, so I snagged the DVD instead. I always wanted that Blu-ray and several times almost chunked out the gray-market price tag. Glad I waited!

Watching My Bloody Valentine again brought back a lot of great memories of a grand old time where the idea of convenience was driving someplace that had all of the movies you ever dreamed of in one place and renting something new or an old favorite. You would have to browse shelves, look at the box art, and maybe read the description before you made your choice. Today - it's all thumbs. Having missed out on my chance to snag that 2009 disc, it's great to see Scream Factory give this title the due upgrade it's long deserved. It's a fun show, turn out the lights, pop some corn, grab your favorite Canadian-brand beer - hell - maybe drive around the block and pretend you rented it before turning it on! It's a fun way to spend a chilly night.

Scream Factory gives My Bloody Valentine a true Collector's Edition release in a two-disc set - if ever there was a time to produce a NECA action figure with one of their releases - this was it! I'd have loved a Harry Warden figure! Such as it is, this is pretty great. Both versions of the movie get their own Region A BD-50 disc. Both discs are housed in a standard sturdy case with revisable case artwork with the classic original key art. The slipcover is identical to the newly commissioned artwork. Both discs load to animated main menus with traditional navigation options and their own unique sets of bonus features.

For its time, the 2009 release of My Bloody Valentine wasn't terrible. Prior to that, I'd only seen the film on a long-ago magnetically damaged VHS tape complete with purple warps in the image. So that release was certainly an improvement, but it left a lot to be desired. This new 4K scan of the original negative sourced for this transfer is a massive leap. I felt like I was seeing small details in the gore, costumes, and albeit limited set design that I'd never noticed before. That hotdog boiling scene and some of the horror aftermath payoffs really sparkle here! Colors also feel much more natural with healthy flesh tones that don't appear quite as pink as I remember. Reds also take on a more true crimson color when the blood starts flowing. Black levels also appear more inky natural giving that desirably three-dimensional depth. Film grain is present without any sign of waxy DNR.

A quick note about the Unrated Version, those insert scenes still appear rough around the edges. While it does appear that some effort was made to even out these trims of extra gore, there is a notable shift in overall brightness levels when they pop up. It's not so distracting to pull you out of the show, it's not like they're VHS tape inserts in an HD movie. For how short these sequences are it's not that big an issue. It'd been amazing to get those sequences even with the rest of the movie, but this isn't bad - it's still the better, more satisfying version of the film.

Both versions of My Bloody Valentine enjoy a DTS-HD MA 2.0 mono mix - however - they're not quite the same mix. It sounds as if the Unrated Cut is given a little extra kick in the pants to give some of the effects more dynamic resonance - stabbings, heart rips - all of the squishy stuff kicks just a little stronger when and where it counts. That said, it isn't like the mix for the R-Rated Theatrical Cut is any kind of slouch. Both tracks enjoy clean clear dialog exchanges, the sound of the air mask really dominates the front ends giving a nice dissonant tone. Some primary sound effects are again more prominent for the Unrated Cut, but the theatrical displays a similar level of atmosphere even through a restrained mono mix. It's just a slightly odd difference between tracks that I'll chalk up to the Unrated needing additional attention for those extra gory scene extensions. All around both tracks are great with nice levels so you don't need to ride the volume.

In true Collector's Edition form, Scream Factory loads up My Bloody Valentine with a mass of extra features - all of which are worth digging through. The bulk of the bonus features are found on the Theatrical Cut disc with the Unrated Cut getting the great director commentary on top of a cast reunion bit.

My Bloody Valentine rips out hearts for the second time on Blu-ray thanks to a bloody great Collector's Edition from Scream Factory. This cult Canadian classic may not be the most original holiday-themed slasher, but it gets high marks for ambition - and some pretty damn inventive kills! Not seen on Blu-ray since 2009, this fun fright flick digs its way out of the Out-Of-Print mineshaft delivering both the Theatrical and Unrated versions culled from fresh new 4K restorations offering an impressive A/V presentation on top of an assortment of great bonus features. Just in time for the titular holiday - My Bloody Valentine is Recommended.

Sale Price 19.99
List Price 34.93
Buy Now
3rd Party 19.99
In Stock.
See what people are saying about this story or others
See Comments in Forum
Previous Next
Pre-Orders
Tomorrow's latest releases