Paul Schrader's first directorial effort Blue Collar may be better known for the behind the camera drama, but the film is a searing indictment of labor versus management and their union and the corrupting influence of power. Richard Pryor, Harvey Keitel, and Yaphet Kotto deliver memorable performances as everyday men in way over their heads working the line in the Motor City. Kino Lorber Studio Classics delivers the film to Blu-ray with a terrific A/V presentation. Bonus features are slim but the Schrader audio commentary is ported over from the old DVD release. Recommended.

It's tough working the line in the Motor City. If it isn't management kicking you in the ass, the union is kicking you in the shins - and you still have to put in your 8-hours. For Zeke (Richard Pryor), Jerry (Harvey Keitel), and Smokey (Yaphet Kotto) - it's a daily grind. Work all day, get paid enough to barely live on, and then come back. If all goes well you should still have a job until the next contract renegotiation. Tired of their shop steward Clarence (Lane Smith) dragging his heels and the union not taking their needs seriously, they hatch a plan to rob the union office safe hoping for a big cash payout. What they found instead is a whole lot more dangerous and risks their friendship as well as their lives. 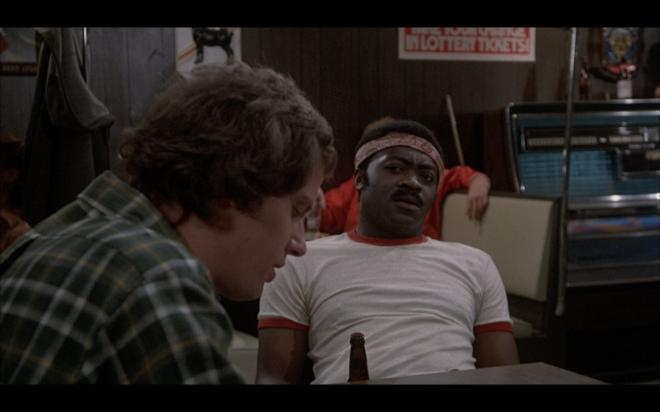 Blue Collar wears its politics on its sleeves. The Unions are ruing businesses and are keeping workers penned down. Schrader takes a very one-dimensional view of the auto industry during the 70s when there are multiple factors that dragged down Detroit's Big Three during that period. It's a feckless take, often pinning the culmination of poor business management, shady union double-dealings, import infringement, and a debilitating international oil crisis on a single organization. You don't need to watch The Irishman know unions had/have a bad reputation, but to say they're the only party at fault is a bit ludicrous.

With that bit of soapboxing about my home state industry and deep familial roots out of the way, I can say Blue Collar is a fantastic first directorial effort. Schrader builds intricate characters fully designing their unique lives around the common work they do. All of the men have their grievances and motivations. When they decide the only way forward is to rob the organization that supposedly has their back, it's a move that makes sense. They're not going to get better pay from management and their work conditions aren't going to improve with their current union reps. Through it all, Richard Pryor, Harvey Keitel, and Yaphet Kotto deliver terrific performances highlighting each man's unique walk in life. They all have their motivations for doing what they do. Some of the decisions they make are more tragic than others and impact their friendship. Apparently, behind the scenes things weren't as rosy, but the three men sell it well on the screen.

What I love about this thriller is the aftermath. Usually, the final part of a heist story is rushed through but in Blue Collar Schrader deftly plays out how the criminal venture falls apart. As things play out -- no spoilers! -- we see these characters change. Their motivations become something different than when they started. Friends become enemies and the corrupting influences of power and authority take root.

While Blue Collar is a bit one-sided in its depictions of the systemic problems the American auto industry faced during the 70s, it nails the corrupting nature of power. It likes to take these moments to examine how people can turn on each other sacrificing big-picture goals for short-term immediate gains. To say this movie isn't too friendly to capitalism and the ideals of a free market is a bit of an understatement. It pretty firmly stamps its foot that corruption is everywhere and when Government steps in to correct the problem, they're too inept to do anything meaningful. Whether or not you subscribe to that notion is up to you. I take the film as a solid thriller made about three men stuck working in an industry during one of its worst moments in history. Considering all of the behind-the-scenes drama (seriously look it up -it should be its own movie!), it's a filmmaking miracle that this film is any good at all let alone was completed.

Blue Collar arrives on Blu-ray from Kino Lorber Studio Classics in a single-disc release. Pressed on a Region A BD-50 disc, the disc is housed in a standard sturdy case. The disc loads to a static image main menu with traditional navigation options. 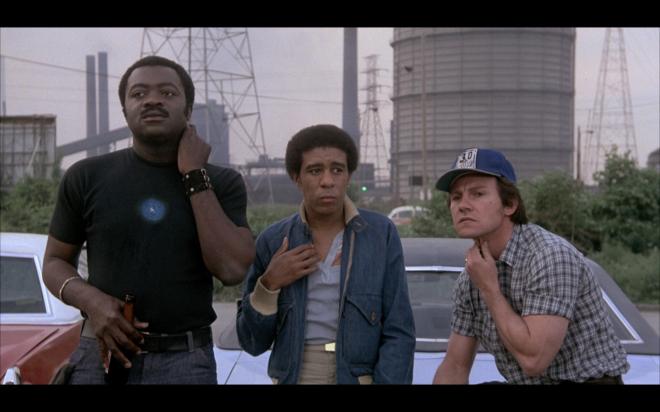 While the artwork doesn't indicate the vintage of the transfer, Blue Collar enjoys a solid 1.85:1 1080p presentation. Guessing from the condition of the elements and some trace bits of edge enhancement - thankfully nothing terrible - I would wager this is an older HD master intended for the original DVD release. Thankfully the issues at hand are only slight. Details are sharp offering clean lines without terrible banding or an overly crunchy appearance. Film grain is apparent giving the image a nicely film-like appearance. Colors are well resolved offering some vivid primaries. The biggest issues at play are some of the darker scenes that don't really highlight true blacks. Well-lit scenes appear to have an appreciable sense of depth and dimension but darker sequences flatten out as they never quite approach true black. There is some age-related speckling, but no serious damage. All in all, it's a great looking image for a 40-year-old movie that hasn't seen much of a restoration effort over the years. 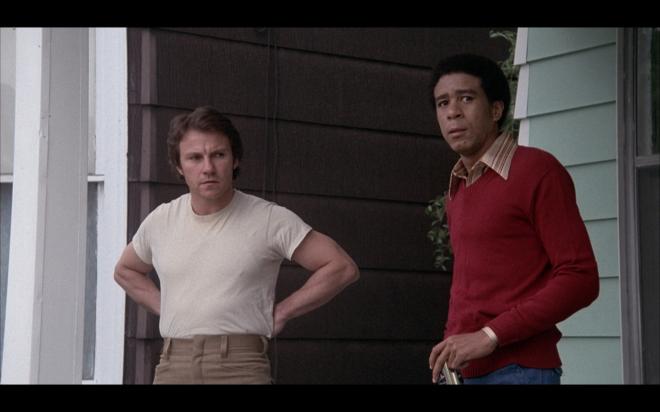 Rolling off the line with a DTS-HD MA 2.0 audio mix, Blue Collar earns some strong sonic marks. The opening credits and any time the men are working on the line is really impressive stuff. The sounds of machinery, tools, air pistons - you name it - the soundscape is full and active and never once falters. Even with all of the activity dialog stays strong and never loses place. When the film gets quiet and conversational it maintains this sense of atmosphere layering in small subtle effects. Even the most innocuous moments like when Zeke is visited by an IRS agent, that small room feels full and active even when it's just two men talking. Levels are on point and don't need any monitoring. Age-related hiss or pops aren't an issue at all. All in all, a great audio mix. 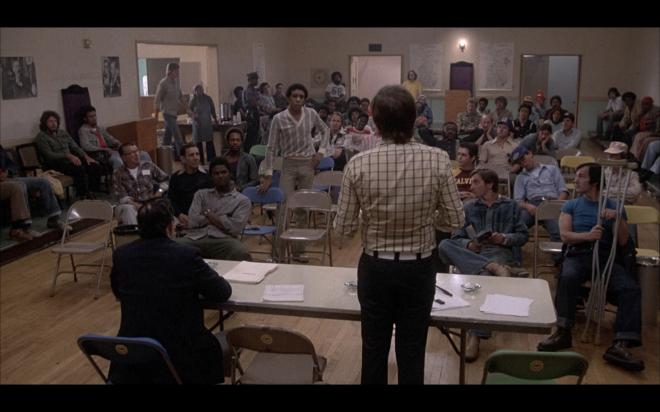 Blue Collar doesn't have a lot of bonus features, but where it lacks quantity it makes up for it with quality. Bringing over the great commentary track featuring Paul Schrader and Maitland McDonagh is a great listen. Schrader doesn't have too many fond things to say considering how things went down, but it's refreshing to hear that he doesn't completely disown the film as he once did.

While certainly a one-sided look at a tense and divisive issue, Blue Collar delivers a first-rate everyman thriller about three men who work the line and are willing to do anything to improve their lot in life. Even if it means betraying one another. With incredible performances across the board, Paul Schrader delivers an exceptional piece of filmmaking.

Kino Lorber Studio Classics delivers Blue Collar to Blu-ray in fine form. The video transfer may be from an older source, but the image holds up with only small quibbles. The audio mix is terrific stuff and the archival audio commentary is a great listen if you're a fan of the film. If you're a fan of the film or love how Paul Schrader crafts his characters, Blue Collar isn't one to miss. Recommended.

Sale Price 15.55
List Price 29.95
Buy Now
3rd Party 14.38
In Stock.
See what people are saying about this story or others
See Comments in Forum
Previous Next
Pre-Orders
Tomorrow's latest releases