Dora and the Lost City of Gold

Dora and the Lost City of Gold follows a now teenage Dora who heads to high school in California but returns with some classmates to find a lost city with the help of her animal friends. Although the film looks and sounds excellent, the story and characters are all one-note abominations without any conflict or real suspense. You'd think for a big live-action teenage film set in the jungle, there would be some intrigue and tension. That's not the case though as everything in this movie is tailor-made for five and under. Still, the 1080p HD transfer and Dolby Atmos track are both good, along with some decent bonus material. Rent It if you have young children. 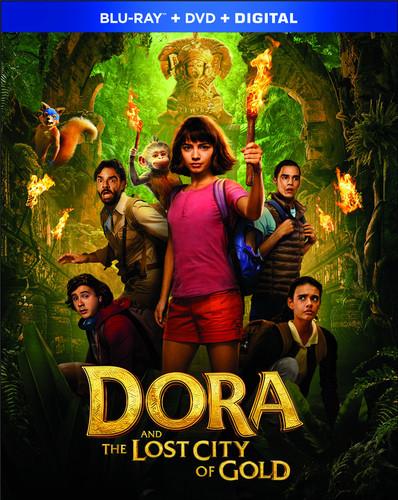 Now a young adult, the former kid explorer named Dora is big on adventure and wildlife in the new live-action film Dora and the Lost City of Gold. Mostly getting rid of the childish themes of the hit animated show, this now teenage Dora journeys to the dark side of the jungle in order to save the day and her family while navigating traps, villains and a water slide that is eerily reminiscent of The Goonies. No matter how action-packed director James Bobin (The Muppets) tried to make this adaptation, it never grows past a five-year-old level, despite some phenomenal set pieces. In other words, the film takes no chances on being edgy or growing up with Dora herself, instead, the film relies on the safe way of delivering dialogue and cartoonish action sequences that would only excite super young fans of the show.

The 16-year-old Dora (Isabela Moner) lives with her parents (Eva Longoria and Michael Pena) in the jungle inside a luxurious jungle abode. Even though she's been raised in the wild by her animal friends and parents, she is set to Los Angeles to a city high school. She doesn't take to city life very well due to her awkward know-it-all nature, but she makes a friend or three and eventually Dora and her three classmates are sent back to Dora's parent's place in Peru to search for The City of Lost Gold.

That's where Alejandro (iconic actor Eugenio Derbez) enters the picture as the flamboyant bad guy that never seems to be an enemy, but more of a slight nuisance. I know themes are light-hearted in the film, but to amp up any sort of conflict or suspense, the villain should be as good as its protagonist, which it never is here.

Dora and the Lost City of Gold is not a good film. Each bit of adventure, drama, and suspense or lack thereof falls flat and vanishes immediately into thin air. Every henchman or foe that crosses paths with the teens is easily knocked down with no real fight or anxiety. The animated Lion King movie is more likely to give kids nightmares than this film. In addition to that, the performances border on silly self-awareness and being over-the-top in every scene. It becomes tiresome quickly.

The one element that has worked well in the film is the elaborate and practical set pieces, which look top-notch and beautiful. The jungle never looked so bright and prosperous before with big stone structures, tons of trees and wildlife, and other mysteries along with way. It brought that old nostalgic feel of real-life sets back to the films and left a lot of the CGI at the door, with the exception of Dora's animal friends.

For trying to be a hip, young adult feature film and furthering the story of Dora, this Lost City of Gold never pushes any boundaries, let alone step within 50 feet of them. The result is a movie that wants to attract all ages, especially the teen audiences, but could only muster a toddler's attention span for a few minutes. It's painful to get through and that's unfortunate because this could've been that start of a bigger franchise with a little grit.

Paramount swings Dora and the Lost City of Gold to Blu-ray + DVD + Digital. The discs are housed in a blue plastic case with a cardboard sleeve featuring the entire cast Inside, you'll find the digital code that you can download for iTunes. 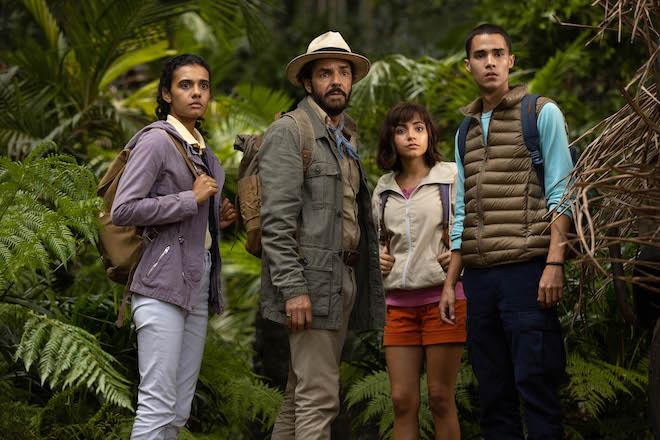 Dora and the Lost City of Gold swing from the vines in 1080p HD from Paramount with a 1.85:1 aspect ratio. There is no 4K UHD release for the film, but that doesn't stop this Blu-ray image from having a wonderful scheme and sharp detail throughout.

The color palette has a super bright and sunny disposition from start to finish. It's a marvel to look at, from deep inside caves to the stunning exteriors of the jungle, that deliver some wonderful primary colors that are bold and intense. The many shades of greens, reds, and yellows on the trees are all well balanced and maybe even enhanced quite a bit to give off an animated look. The dirt and trails are a good mix of brown and orange along with crystal blue skies to equal out the warmer colors. Dora and her friend's clothing are no different either, always standing out with flashing colors. Black levels are inky with no crush, but there aren't a ton of low-lit situations. In fact, everything is on the brighter side of life here.

The detail is very vivid and strong in every lighting condition. Wide shots showcase the plant life well with tree bark and leaves of all shapes and sizes. Every pebble of dirt and rock looks detailed as well, along with the threads in the wardrobe. The CGI animals look good enough, but never on par with something like Gollum from the Lord of the Rings trilogy. You'll be able to see a few minor details with hair follicles, but other than that, it's a rather flat animated character. Closeups reveal, wrinkles, individual hairs, five o'clock shadows, makeup blemishes and more, which all look good. Skin tones are also natural. 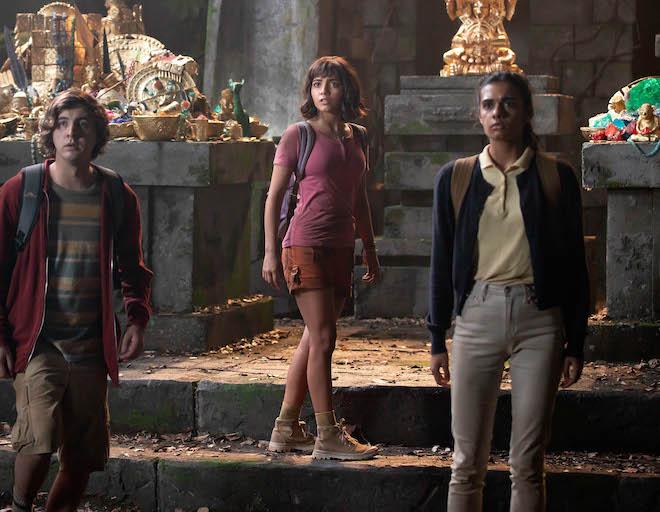 This Blu-ray comes with a Dolby Atmos mix that sounds commanding. There are a ton of different effects and ambient noises throughout the film and this track handles it with ease.

Sound effects are booming right off the bat with jungle sounds and house noises. Nothing is overbearing or overtly loud, but rather a perfect balance and precision of sound in each speaker. Once the teens are back in Peru, the soundscape really comes alive with ambient noises of animals in the trees, people walking on gravel and dirt, and more. The big underwater sequence has a big hefty hand of bass to create a good low end of depth that immerses you in the chaotic underwater cave.

Overhead speakers make use of animals flying by and other atmospherics most of the time, where each noise transitions smoothly and easily from speaker to the next. The score and music is candy-filled pop and always upbeat, but never drowns out any other sound element. Lastly, the dialogue is clean and easy to follow along with and free of any issues. This is a solid Dolby Atmos track. 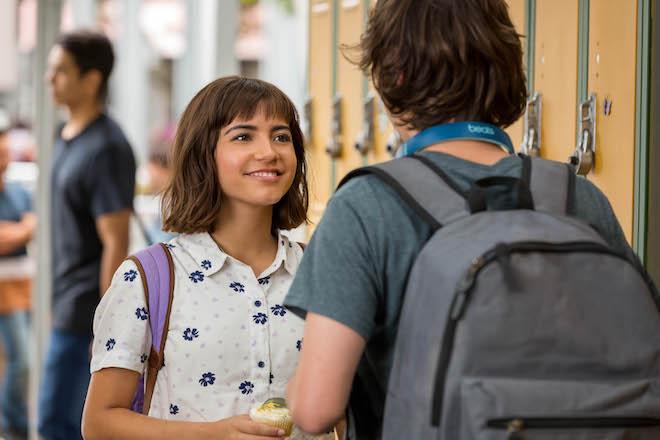 There are about 37 minutes of bonus material, including cast and crew interviews, behind the scenes footage, deleted scenes, and a blooper reel. It's light-hearted and fun for those who love the movie. 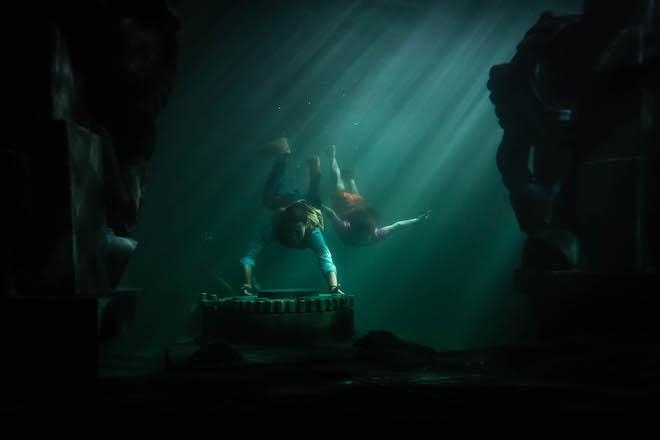 Dora and the Lost City of Gold is a failed attempt of something great. Instead of trying to appease a wide audience and have an edge with a teenage Dora, the filmmakers opted to play it extremely safe and make a movie only for kids under five with no real conflict or message. The 1080p HD video presentation and Dolby Atmos audio track are well worth your while though. The bonus features show some cool behind the scenes information on how a lot of the practical effects were made as well. Rent It if you have young kids.