Blu-ray: Highly Recommended
4 Stars out of 5
Sale Price 16.69
Buy Now
3rd Party 2.19
Temporarily out of stock. We are working hard to be back in stock. Place your order and we’ll email you when we have an estimated delivery date. You won’t be charged until the item ships.
Release Date: December 4th, 2012
Movie Release Year: 2012
Release Country: United States
COLLAPSE INFO -

One of the most famous and successful artists in the world, Ai Weiwei has earned international acclaim as much for his provocative art works as for his political activism in the fight against oppression. In AI WEIWEI: NEVER SORRY, journalist and filmmaker Alison Klayman is granted unprecedented access to Ai to present the first feature-length portrait of the sculptor, photographer, filmmaker and installation artist who was widely praised for his work on the "Bird's Nest" stadium for the 2008 Olympics in Beijing. But that same year his criticism of the Chinese government following the Sichuan earthquake that claimed thousands of schoolchildren made him a target of the powers that be. Presenting a rare look inside modern China while documenting the courageous Ai's artistic process in preparation for major museum exhibitions, his intimate exchanges with family members, and his increasingly public clashes with the police and the government, AI WEIWEI: NEVER SORRY is a unique portrait of the man behind the headlines. 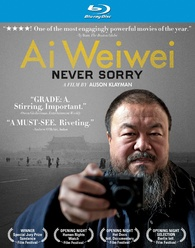 ‘Ai Weiwei: Never Sorry’ is an amazing documentary that centers around the world renowned artist known as Ai Weiwei.  Perhaps Weiwei is best known for his design work for the Bejing National Stadium known as The Bird’s Nest, which was the focal point for the 2008 summer Olympics. Shortly after the stadium was finished, Weiwei publicly denounced the games as Chinese propaganda by all the media not covering Bejing’s vast underclass people. Those statements put him in the public spotlight and he was under heavy scrutiny from the Chinese government, but Weiwei’s courage to stand up to the Chinese government became the main emphasis of his art.

Director Alison Klayman follows Ai Weiwei through some of the best and worst moments of Weiwei’s life.  We not only see the artist and political dissident side of Weiwei, but we also see the father, husband, and friend side of Weiwei. This documentary shows clear evidence of the Chinese government trying to silence one of its citizens for speaking out against the government by force, violence, and any means necessary.  We see the police install security cameras  in front of Weiwei’s home, we see them track him on his travels and harass him, and we see them brutally beat him in his hotel room late at night as he is showing support for a friend who is on trial for speaking out against the Chinese government.

Due to the beating by the police, Weiwei suffers a life-threatening brain hemorrhage.  He documents everything and tries to get the police to acknowledge their actions in the role of his injuries, which never goes pleasantly.  This is great for Klayman, as she is front and center in a foreign land, seeing the frightening world that is the Chinese government.  Her lens captures several violent incidents brought on by the police and the oppression it causes.  Yet, the camera also captures the intimate moments of Weiwei and his family and his art production.  It’s a well balanced documentary.

Ai Weiwei was asked, “What kind of artist does he consider himself to be?” His answer was that he considered himself like a chess player, that when his opponent made a move, he made a move.  We see evidence of that throughout ‘Never Sorry’ as he is tormented by the police and government.  One of his more moving works was inspired by the 2008 Sichuan earthquake that killed 70,000 people.  Weiewei went above and beyond to create a wall commemorating the thousands of students killed in the earthquake, by simply listing the names of the dead.  The work he did to create this was out of this world.  Weiwei traveled to Sichuan and interviewed survivors and tracked down over 5,000 names and birthdays of the children killed in the earthquake.  It was clear that these children died die to poor building conditions and shoddy “tofu” construction.  The Chinese government refused to release any names to the public of the deceased.

As the documentary comes to an end, it was widely publicized that Ai Weiwei went missing.  He had disappeared for 81 days and was held at a secret location by the Chinese government.  When he was released, he told all press that he couldn’t talk about anything, which was weird, because all he did was speak his mind.  It was as if they brainwashed him or threatened his family.  The Chinese government said they held him for 81 days to question him on tax evasion charges, which was just a front to silence him on his beliefs. After the film was shot, news headlines showed that Weiwei lost his court appeal concerning the tax evasion charges.

Ai Weiwei’s art is beautiful and shocking at the same time. He is known for taking pictures of famous and political monuments with his own middle finger in front of the camera, telling the system to “fuck off”.  Weiwei also is known to take genuine ancient artifacts, such as very old vases and statues and break them intentionally, or paint over them with mainstream logos such as the Coca-Cola logo.  It’s a very effective work of art.

‘Ai Weiwei: Never Sorry’ shows us the man and the artist, but also shows us the place from which he came.  A place where freedom has severe limits and where anyone can be beaten or kidnapped by authorities for speaking their mind.  We see the oppression and chaos is causes.  This is where Weiwei turns to social media via blog and twitter to get his word out.  But, most of the time, Weiwei and these social networking sites are shut down by the government.  He recognizes that he is always being watched and that his own country won’t validate or recall the thousands that died in the earthquake, so Weiwei covers a German art museum in thousands of backpacks that were the kind the students wore when they went to school.  I believe Ai Weiwei aims to make the world a better place through art, and I believe he has. 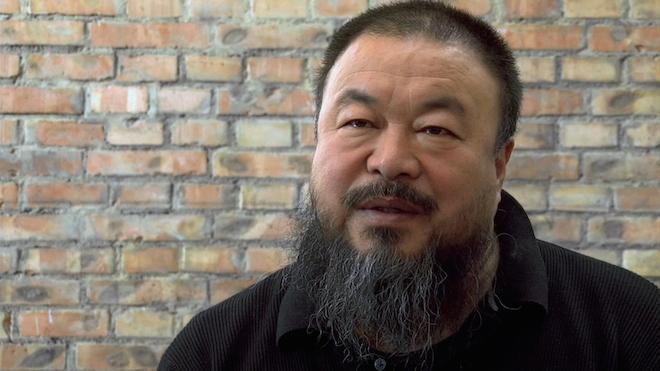 'Ai Weiwei: Never Sorry' comes with a great 1080p HD transfer and is presented in 1.78:1 aspect ratio. This documentary features sit-down interviews, archival footage, and some guerilla-style shooting as Ai WeiWei is being transported to police stations, on the run from the police, and at art galleries. So there is a wide variety of different visual elements and camera equipment used here. For these type of situations, the image looks surprisingly great and true to its source.

The sit-down interviews feature the greatest detail, as the shots are setup beforehand. The interviews reveal fine textures in the clothes of the interview subjects and individual facial hairs as well. It looks very good. When the camera crew is on the fast move, things get a bit shaky and soft, but that's how the filmmakers had to make this. The colors are very nice and realistic. There isn't a lot of color grading to emphasize anything. It's all natural. The black levels look very good here too along with the skin tones. There are some instances of banding, aliasing, video noise, but it is all part of the source of the video and not a compression problem. This documentary looks very good. 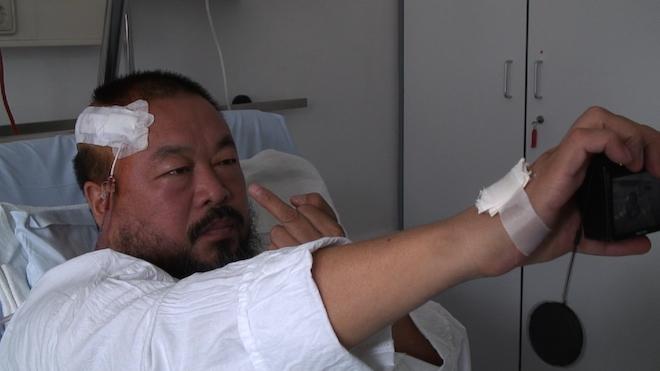 This release comes with a great lossless DTS-HD 5.1 audio mix in Mandarin. There is a good bit of English in the film too, but there are some great subtitles for the Mandarin language scenes. The dialogue is always crystal clear and easy to understand. There were no problems with any pops, cracks, or hissing.

The surrounds get used often with some ambient noises of weather and people chattering in galleries and on the street. There is a bit of score here too that never drowns out any of the dialogue and adds a fun and whimsical ambience to the whole documentary. For this type of film, this audio presentation is amazing. 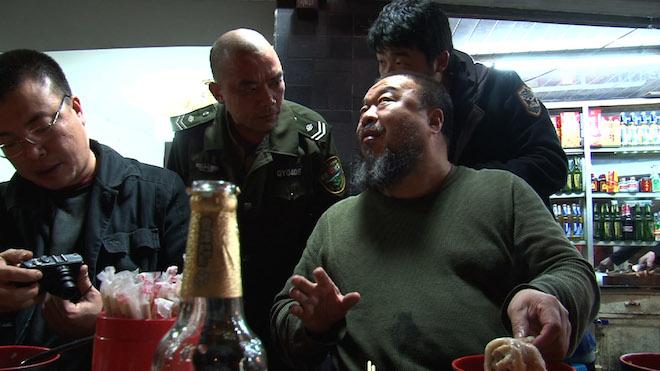 Audio Commentary - Director Alison Klayman along with her producer Colin Jones, and editor Jennifer Fineran give a good commentary track. The three discuss how they attempted to make this documentary, and how they approached every aspect of filmmaking. They also talk about the countless hours of footage that had to be edited and the surprise imprisonment of their subject. This is a must listen for fans of the documentary.

Deleted Scenes (HD, 40 mins.) - A ton of deleted material from the mountains of footage they captured. Some of it shows Weiwei visiting some other art galleries, earthquake sites, talking with his fans, and even eating a hotdog.

'Ai Weiwei: Never Sorry' is an incredible documentary on one of the most talked about artists of this modern century. His work has been talked in many powerful circles and owned by tons of prominent people. His politics and views do not agree with his homeland in China, and he is even imprisoned for months at a time for expressing his views . It's a very well made documentary and sheds a light on another side of the world where things are done much differently and freedoms that we take for granted are not allowed and punished. The video and audio presentations are great with some excellent extras. This documentary comes highly recommended.

Sale Price 16.69
Buy Now
3rd Party 2.19
Temporarily out of stock. We are working hard to be back in stock. Place your order and we’ll email you when we have an estimated delivery date. You won’t be charged until the item ships.
See what people are saying about this story or others
See Comments in Forum
Previous Next
Pre-Orders
Tomorrow's latest releases