Overview - A young teacher (Swank) inspires her class of at-risk students to learn tolerance, apply themselves, and pursue education beyond high school.
OVERALL
Worth a Look 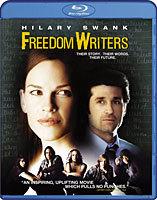 Relatively overlooked upon its theatrical release early in 2007, 'Freedom Writers' is inspired by the diaries of a group of real Long Beach, California teenagers after the 1992 Los Angeles riots.

Based on the book "The Freedom Writers Diary" by Erin Gruwell, Hilary Swank plays the author as a teacher assigned to a group of at-risk students at a Long Beach high school in the early '90s. Fresh out of college, Gruwell is surprised to find the school entrenched in drugs, gangs, and racism. With the L.A. riots still a fresh memory, the students are clearly not ready to trust a teacher unfamiliar with their world. Soon, however, the young teacher manages to break through with the kids by honing in on lessons about Nazi Germany, the Holocaust and "The Diary of Anne Frank." As the kids come to understand that they're not alone in a violent world, the form an unexpected bond with Gruwell after she asks them to begin keeping journals of their own.

'Freedom Writers' is certainly an effective entry in a growing subgengre of films focusing on inspirational teachers. The plot never falters from delivering its emotional impact -- tears fall when they should, voices rise on cue and tragedy strikes when the story needs it most. On more than one occasion, I found myself moved by the story of a selfless adult reaching out to a group of young adults intent on rejecting her.

At the same time, I couldn't help but feel that the true heart of this story somehow got lost in its translation to the big screen. Arriving at its conclusion far too conveniently, I had difficulty buying into how quickly this group of hardened students come around to a variety of truths concerning life, racism, and themselves. While the actual students had months to grow under Mrs. Gruwell's tutelage, Swank is somehow able to miraculously change their lives without much effort, making the fictional structure of the story much more obvious.

As such, the narrative devices of the film seem to rob the story of its authenticity, leaving 'Freedom Writers' with little to offer aside from the familiar sentimentality expected of the genre. That's a particular pity given the real-life origins of this project.

On the bright side, writer-turned-director Richard LaGravenese's directing is in constant motion, bouncing from one moment to the next with steady control and nice attention to detail. Likewise, cast of young (and largely inexperienced) actors manage to turn in a series of performances that appear more effortless than even that of the Oscar-winning Swank.

In short, while 'Freedom Writers' is effectively made, and succeeds in striking at a few emotional chords, ultimately it does little to elevate itself beyond the conventions of its genre. I can certainly think of worse ways to spend an evening, but if you're like me, you may end up wishing you'd spent the time reading the real-life journal entries that inspired the film instead of the film itself. 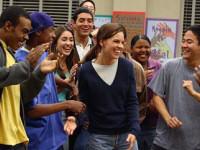 Presented in 1080p utilizing the AVC MPEG-4 codec, 'Freedom Writers' is a welcome treat for the eyes with a surprisingly high picture quality. Colors are vibrant, skintones are fresh and warm, and black levels add a realistic dimension to the image that looks great. I was particularly impressed with the transfer's rendering of fine object detail -- book titles are clearly visible from afar, individual blades of grass are well defined, and the texture of the desks in the classroom is convincing. There also isn't a hint of source noise, artifacting, or print marks anywhere on the image. The transfer is pristine and the entire production ends up looking much more impressive in high definition than I was expecting.

There are occasional issues with contrast peaking, but this appears to be an intentional effect used by the director. While it can slightly mar the punch of the video at times, it isn't a consistent problem. Contrast levels are generally excellent and the picture doesn't feel artificial or have a resemblance to what I was prepared to identify as an overbearing involvement from MTV (which produced the film).

In a side by side comparison, the video quality on the HD DVD and Blu-ray editions of the film is identical. In short, fans of both formats should find plenty of visual bang-for-their-buck in 'Freedom Writers.' 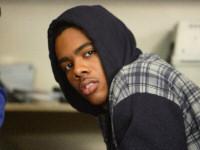 Unfortunately, the HD DVD and Blu-ray editions aren't equal from every aspect. Once again, Paramount has granted the HD DVD a Dolby Digital-Plus 5.1 (1.5 Mbps) surround track, while this Blu-ray edition gets a thinner Dolby Digital 5.1 (640kbps) mix. With other similarly uneven releases, the difference between the two has often been barely discernable, but in this instance it's a bit more clear. The Digital-Plus track on the HD DVD exhibits mildly fuller dialogue, more perceptible ambient effects, and a weightier presence to the bass tones in the soundtrack.

Otherwise, both mixes handle their individual tracks well. While the dialogue-centric story doesn't provide much opportunity to showcase a surround sound system, the effects are distributed across the channels with subtlety and attention to detail. Channel movement is quick and soft, accuracy is dead on, and ambiance adds a nice immersion to the proceedings. Dialogue is crisp and the classrooms, museums, and offices all have unique acoustic properties that keep soundscape inaccuracies to a minimum. The soundtrack is packed with early '90s grunge-era hits and -- to this mix's credit -- the treble lines are clean, the bass beats are earthy, and the songs are well prioritized within the sound design. 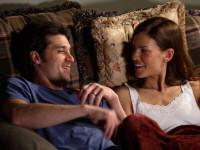 The first thing I jumped to in this supplements package was a commentary track with the director and Hilary Swank. Sadly, however, this one is a tough slog. Dry and uninteresting for the most part, Swank and LaGravenese primarily stick to discussing the on-set decisions, filming methods, and technical anecdotes about particular shots. If this track (or another) had featured the actual students and/or Gruwell's herself, it might have made for a fascinating listen. As is, this is a standard commentary that didn't increase my enjoyment of the film at all.

There are also two featurettes included -- the "Freedom Writers Family" (19 minutes) and "The Story Behind the Story" (11 minutes). Unfortunately, each is little more than a promotional reel for the film, consisting of too much film footage, too many congratulatory interviews, and too little on the people the film is based on. The only thing that makes these featurettes worth watching at all are the all-too-brief interviews with Erin Gruwell and some of the former members of her class. Unfortunately, their minor presence here only made me more frustrated by their otherwise overwhelming absence in ret of the supplemental package.

Finally, there are a group of Deleted Scenes (12 minutes), which are all wisely-cut gap-fillers; a short featurette called "Making A Dream," which is a behind-the-scenes look at a music video that samples Martin Luther King's famous speech; and a Photo Gallery featuring screen grabs and production stills from the film. 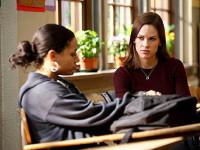 'Freedom Writers' is a well intentioned and effectively made film, but unfortunately it never manages to rise above the genre conventions of similar efforts. As an Blu-ray release, this one's a mixed bag. On the upside, the video quality is excellent. On the downside, the supplemental features suffer from the absence of the real Erin Gruwell and her former students. Somewhere in the middle, the 640kbps Dolby mix on this Blu-ray release is perceptively thinner (albeit marginally) when compared to the 1.5 Mbps mix on the HD DVD. All in all, fans of the film should will likely enjoy this high-def package, but newcomers might consider giving this one a rent before dropping too much cash on the counter.

Sale Price 11.98
List Price 29.99
Buy Now
3rd Party 11.98
In Stock.
See what people are saying about this story or others
See Comments in Forum
Previous Next
Pre-Orders
Tomorrow's latest releases