Downton Abbey has accepted its invitation to the big leagues in the form of a feature film. The Crawley family and townsfolk are hosting the British Royal Family for a night, which sets off a string of amusing preparations and conversations with your favorite characters from the PBS show. There's a delightful 1080p HD transfer, a satisfying 7.1 audio mix, and several worthwhile extras on this release. Highly Recommended! 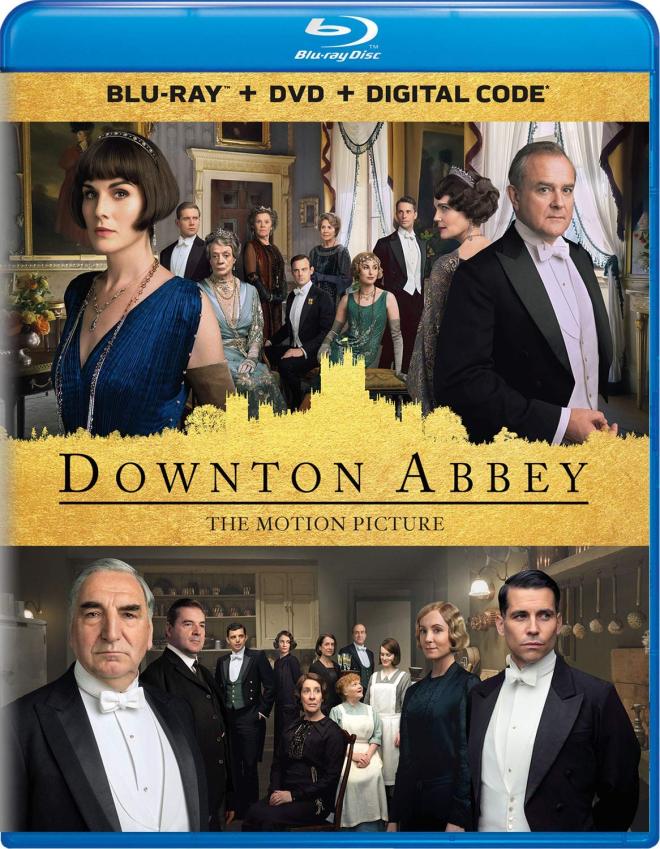 If something is canceled or ends in these current entertaining times, you shouldn't get upset. With the rise of more streaming services and movie studios turning your beloved TV shows into feature films, it's a good bet that you'd see your favorite characters return to their fictional universe in the near future. Cue classical orchestra, rich threads, and British accents, because the hit PBS tv show Downton Abbey has received the big-screen treatment.

Taking place about 18 months after the events of the series finale, the inhabitants of the gorgeous Downton Abbey estate along with the townsfolk receive a giant piece of news in the form of a letter from Buckingham Palace. It states that King George V and Queen Mary will be staying overnight with the Crawley family on their tour of Yorkshire. True royalty is finally coming to stay at the castle, which sets up a cavalcade of conflict and humorous moments. Don't worry if you've never seen an episode of the series though since series creator Julian Fellowes (now serving as screenwriter and producer of the film), has given us a small, but concise introduction to the myriad of characters in this house one-by-one, which plays out fluidly in this story.

Once this news arrives, the Downton Abbey estate and its plenty servants and houseguests begin to prepare for the big day. Some old faces are brought back to help with the planning, which leads to some light tension between veteran and rookie personnel. Romance blossoms between a few people, a parade and equestrian show are being prepped for the royal guests, and the sassy, yet proper Violet (Dame Maggie Smith) has something to say about it all. There's even a couple of subplots that play out from the tv series in the form of an assassination attempt, cameo appearances, a young woman with a mysterious past, and a butler who is leading a secret life.

It's all smooth transitions and brilliant dialogue from dozens of characters, both major and minuscule that are all equal parts integral to the household and story. I have a feeling that this isn't the end of the Downtown Abbey clan since Fellowes allowed for some room to grow with some characters in a spinoff production in the future, but by the end of the film, most elements have a perfect bow around them that should satisfy new and old fans alike. It even seems like the entire cast, including Smith, was having a ball putting on the tight corsets and fancy gowns once again.

Director Michael Engler (Party of Five, 30 Rock, Six Feet Under, and major episodes of Downton Abbey, including the finale), perfectly weaves every plot point into a whirlwind of dry comedy and light-hearted conversations that you can't help but want to be a part of this illustrious family. With a bigger budget, the camera work is more majestic with big sweeping shots of the castle and estate, drone footage of the entire land, and long tracking shots of everyone working hard in the house. It looks excellent and is reminiscent of the time period with great attention to detail.

Downton Abbey the film is a mix of the perfect send-off from a beloved television show with an added welcome of a few newcomers to the Downton universe that might just inspire some new stories for a show. There's a passing of the torch aurora about the film that fits in elegantly with the mild fan service and conclusion of an era. What a joy this movie is to watch.

Downton Abbey hosts its Blu-ray in a two-disc Blu-ray + DVD + Digital set from Universal in a classy way. The discs are housed in a hard, plastic, blue case with an insert for the digital copy for Movies Anywhere. The cover art features the entire cast with a cardboard sleeve. 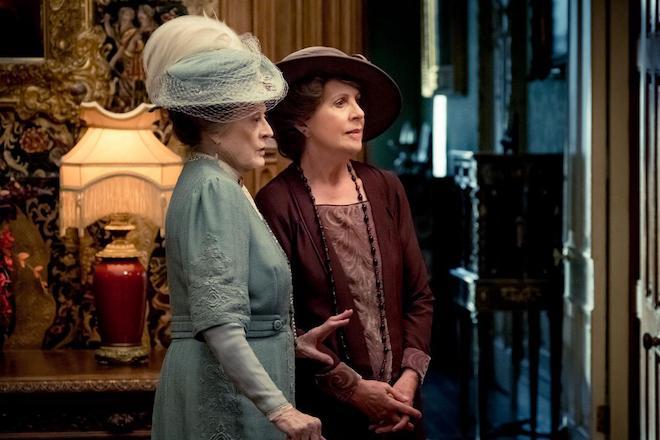 Universal gives the royal treatment to Downton Abbey the movie with a 1080p HD transfer in 2.40:1 aspect ratio. Moving to the bigger cinematic arena gives this once stale looking show a ton of rich color and detail that dazzles the eyeballs.

Colors are bolder and brighter than ever with excellent warm shades of brown, pink, red, yellow, and orange on the interior of the household. The perfect lighting always accentuates these wonderful colors in each scene, which adds to the wide gamut of colored costumes on the houseguests. It's a beautiful sight to see, including the eye-popping military uniforms and whatever hat Maggie Smith graces us with. Additionally, the exterior shots of the castle are demo-worthy and well-saturated with delicious green pastures, perfect colored stone, and crystal clear blue skies, all surrounded by well-lit amber lighting that makes you feel warm and cozy inside. Black levels are inky, although there aren't a ton of darker toned themes, with the exception of one night out at a bar, which looks excellent. Skin tones are also natural.

The detail is vivid in both wide shots and closeups, allowing for highly detailed costumes and facial features. The wardrobe gives way to individual sequins, threads, and textured patterns that can be easily seen in each lighting condition. The same goes for individual hairs, wrinkles, and makeup blemishes on the actor's faces. Elements in the wood and stone house look good and realistic as well. There's no shortage of detail or color in this film.

Lastly, there are no major problems with banding, aliasing, or video noise that hinders the viewing experience. What a visual treat Downton Abbey is. 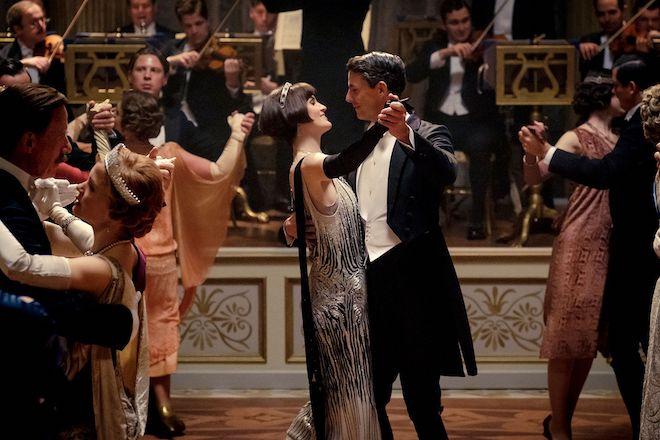 Downton Abbey plays to the lossless DTS-HD MA 7.1 audio track very well. No, you won't have major explosions and helicopters flying overhead spraying bullets down about villains here. That doesn't mean you won't get a solid sounding audio mix. In fact, you'll be fully immersed in the Downton Abbey universe with plenty of household sounds through each speaker. Dishes and glasses are clanking together in one room, while water is running in another. Children are playing, while adults are talking, as you can hear the help outside preparing for the festivities around the house.

It's quite lovely to follow the camera and hear each individual sound that is well-balanced enough to make you feel like you are in the center of this estate. Bigger audible moments sound off with the parade, a gunshot, and at the party, where everyone is conversing and the orchestra is playing to their best ability with perfect strings and bass notes. Surrounds and rear speakers receive ample cues with the score and ambient noises of the household. Dialogue is always presented cleanly without any audio issues to speak of.

There are about 43 minutes of bonus features included here, along with an audio commentary by the director. There are some fun interviews and behind the scenes information. 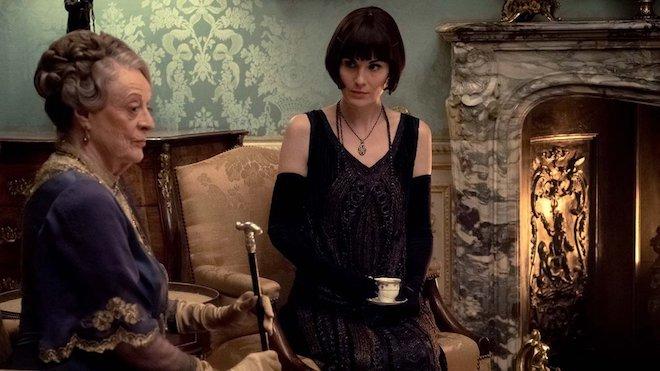 Julian Fellowes and his cast of superb characters are the spotlights of Downton Abbey, which has transitioned nicely to the big screen. This gracefully told tale is witty, heartfelt, and comical. There's a certain charm with each person living and working in the castle and comes forward with each minute passing by. It's a fantastic send-off and perhaps rebirth of a cherished tv series that so many have enjoyed. What a joyful experience this movie is. Highly Recommended!

Sale Price 9.99
List Price 22.98
Buy Now
3rd Party 3.1
In Stock.
See what people are saying about this story or others
See Comments in Forum
Previous Next
Pre-Orders
Tomorrow's latest releases