Days of Wine and Roses

Bleak and realistic, yet laced with a tinge of hope, Days of Wine and Roses searingly captures the devastation and degradation of alcoholism. Director Blake Edwards' no-holds-barred drama frankly depicts how booze ruins a fairy tale marriage, and as the hopelessly addicted husband and wife, Jack Lemmon and Lee Remick give exceptional, Oscar-nominated performances. Warner Archive delivers another terrific transfer, thanks to a brand new 4K restoration that makes this deeply affecting film more visceral than ever. Though often difficult to watch, Days of Wine and Roses is one of those films everyone needs to see, and it comes highly recommended.

"You and I were a couple of drunks on the sea of booze, and the boat sank."

Hollywood has produced a number of powerful, wrenching films about the horrific and devastating effects of alcoholism, including such classics as The Lost Weekend, I'll Cry Tomorrow, Leaving Las Vegas, and A Star Is Born. Yet while most such movies chronicle one person's singular battle with the bottle, Days of Wine and Roses takes the unique tack of depicting the complex dynamics between a husband and wife who are both addicted to booze, and how their codependence drags them ever deeper into the alcoholic abyss and foils any attempts to get sober.

Joe Clay (Jack Lemmon) is a typical high-energy public relations hustler in the Mad Men age, a smooth-talking yet always frazzled operator whose biggest responsibility seems to be securing "dates" for his lofty and lascivious clients. Three-martini lunches, four-martini happy hours, and six-martini dinners are the norm in his schmoozy, wine-and-dine biz, and so are almost daily humdinger hangovers. Joe slogs through the grind with a mixture of elation, exasperation, and self-loathing (which is always soothed by the next drink), but after mistaking Kirsten Arnesen (Lee Remick), the very pretty personal secretary of his biggest client, for one of his immoral party girls, he tries to make amends.

Joe's mea culpas are initially met with frosty rebukes, but soon Kirsten's defenses melt and she agrees to go out with him. At dinner, Joe imbibes with gusto and entreats Kirsten to join him. She tells him she doesn't drink and can't really understand why anyone does. Joe says liquor makes people happy. "I'm already happy," Kirsten responds. Knowing she loves chocolate, Joe orders her a Brandy Alexander, a libation mixed with creme de cacao, and she finds it wonderfully yummy. The drink relaxes her, and as she and Joe fall under the influence, they shed their inhibitions and grow closer. 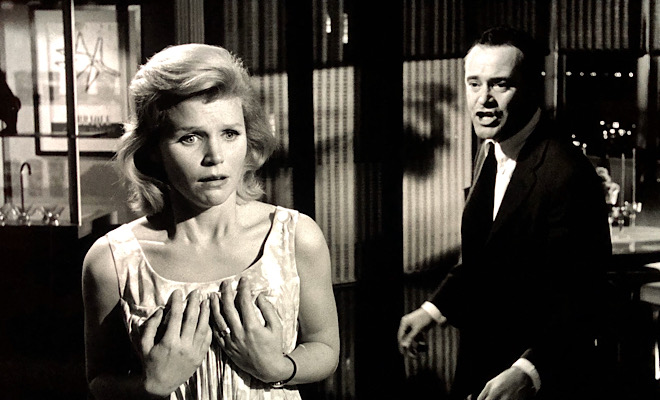 Marriage and a baby soon follow, yet as much as Joe and Kirsten love each other and their daughter, their affection for alcohol soon eclipses any personal relationship and becomes an all-consuming obsession. Drinking alone, though, isn't much fun, so whenever one of them decides to go on the wagon, the other one coaxes and cajoles them off of it, and together they tumble and stumble in a drunken haze down, down, down the stairway of life until they both hit rock bottom.

When I first saw Days of Wine and Roses a couple of decades ago, it put me through the emotional wringer. Though glimmers of hope pervade the piece, it's still a decidedly downbeat tale capped by a heartbreaking denouement that sticks with you long after the movie ends. Director Blake Edwards masterfully immerses us in the seedy, desperate world that engulfs Joe and Kirsten, yet he makes us care so much about them, their sad, systematic decline and brutal self-destruction become almost too much to bear. Like dear family members, we sympathize with their plight and root for them to get clean, but we can't save them...and they can't spare us the pain of watching them sabotage each other's efforts due to loneliness, need, and the insidious effects of a debilitating disease. Quite frankly, the impact of Days of Wine and Roses is so visceral, when the opportunity came to review this new Warner Archive Blu-ray, I really wasn't sure if I wanted to see the film again. I usually only feel that way about bad movies, so it's a tribute to Edwards and his superior cast that such a well-made motion picture inspired in me the same adverse reaction.

Well, I'm glad I took the plunge. Watching Days of Wine and Roses again, I appreciated anew Edwards' impeccable craftsmanship, J.P. Miller's searing script (adapted from his Playhouse 90 teleplay, which starred Cliff Robertson and Piper Laurie and was directed by John Frankenheimer), and especially the mesmerizing, Oscar-nominated performances of Lemmon and Remick. The film still fosters a feeling of dread and impending doom as we watch Joe and Kirsten careen helplessly toward destruction, and their desperate and depraved actions still made me squirm, but this time around, I was better able to focus on the tender, bruising love story that frames the narrative. Amid all the squalor, that underlying and undying affection valiantly fights to quash their addiction, even as it also fuels it. It's a cruel and painful double-edged sword, but it gives Days of Wine and Roses an intimate warmth that other films about alcoholism lack. 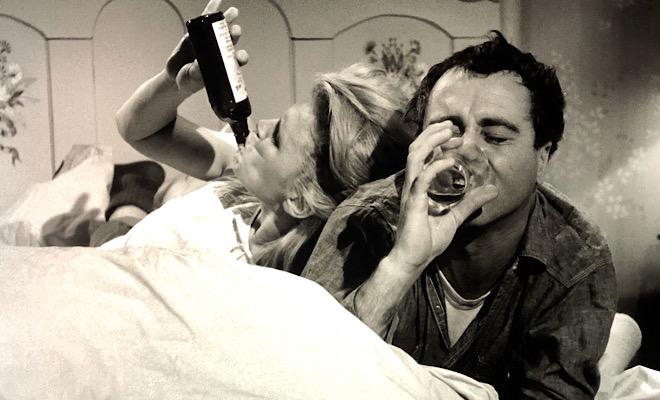 Yes, there's some public service education about Alcoholics Anonymous, but finding help to combat such a formidable foe and take the baby steps necessary to embark on the long road back to a normal life is a huge part of the movie. While the film brutally depicts the myriad stages of an alcoholic's journey - despair, denial, detox, recovery, relapse - it also shows alcoholics that there's a way out, too. And back in the early 1960s, when the shame of addiction was almost as bad as the addiction itself, leading people to life-saving sanctuaries like AA was both a duty and necessity.

Edwards, himself an alcoholic, spent the bulk of his lengthy career making comedies, including eight madcap Pink Panther movies. Days of Wine and Roses was a rare departure and showcases the director's undeniable flair for drama. It also makes us rue the fact he didn't embrace the genre more often. The same can be said of Lemmon. Joe Clay marked his first truly serious role, and his dazzling work is frequently unnerving. The scene where Joe destroys the greenhouse of his father-in-law (Charles Bickford) in a frantic, drunken search for a hidden bottle of whiskey is frighteningly raw and intense, as are his incoherent, strait-jacketed ravings as he combats the DTs in a padded hospital cell.

The radiant Remick is a revelation, too. Few stars of the period could compete with her wholesome beauty, but she proves here she's much, much more than a pretty face. Kirsten's embrace of the alcoholic lifestyle hits us harder than Joe's, because she never wanted to drink in the first place, and her transformation from the wide-eyed, perky girl next door to a glassy-eyed, word-slurring, unkempt dipsomaniac who drinks gin from the bottle in a ramshackle motel room while watching Bugs Bunny cartoons is agonizing to behold. So many actors overplay inebriation, but Remick exercises admirable restraint, and her shattering performance is much the stronger because of it. She and Lemmon also make a very believable couple, and their deep, abiding love amps up our emotional involvement, so we stick with them despite their repulsive behavior.

Charles Bickford, in one of his final roles, exudes great sensitivity as Kirsten's helpless father who tries desperately to pull his beloved daughter and her feckless husband back from the brink. Jack Klugman also impresses as Joe's earnest, committed AA sponsor. He and Lemmon work well together, but their ironic Odd Couple connection is tough to ignore. Lemmon would play neatnik Felix Ungar opposite Walter Matthau in the movie version of Neil Simon's hit comedy five years later, while Klugman, a couple of years after that, would famously portray Felix's sloppy roommate Oscar Madison opposite Tony Randall in the long-running Odd Couple TV series.

Alcoholism is still - and probably always will be - a serious social and medical issue, so despite a few dated elements, Days of Wine and Roses remains an important cautionary film. Edwards and company incisively depict the slippery slope that separates casual drinking from full-blown dependency and how difficult it is for someone to reclaim their honor and dignity after surrendering their soul to booze. It's a powerful, moving, often harrowing portrait that everyone should see. 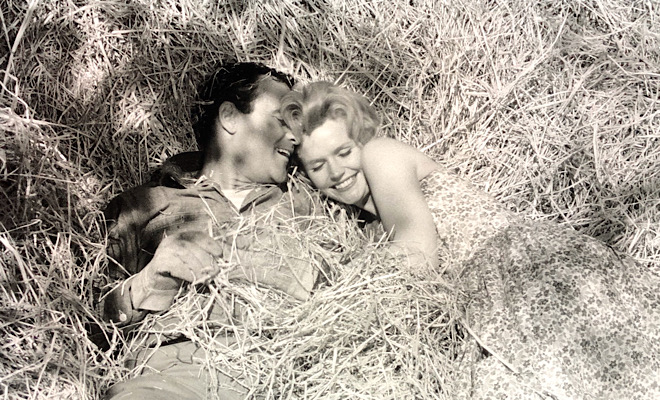 Days of Wine and Roses arrives on Blu-ray packaged in a standard case. Video codec is 1080p/AVC MPEG-4 and audio is DTS-HD Master Audio 2.0 mono. Once the disc is inserted into the player, the static menu without music immediately pops up; no previews or promos precede it.

Once again, Warner Archive hits a home run in the classic movie arena. A brand new 4K scan culled from the film's original camera negative results in a superior 1080p/AVC MPEG-4 transfer that makes Days of Wine and Roses more immediate and wrenching than ever before. Excellent contrast and clarity honor Phil Lathrop's stark cinematography, while a natural grain structure preserves the look and feel of celluloid. Deep blacks, bright whites, and a healthy gray scale produce a balanced image with heightened detail levels and a pleasing sense of depth. Shadow delineation is quite good, patterns are rock solid, and not a single nick, mark, or scratch dots the pristine source material. Razor-sharp close-ups stunningly render fine facial features and consistently showcase Remick's breathtaking beauty, which oozes from almost every frame in which she appears. A couple of early location scenes look slightly washed out and a few transitions are a bit rough, but those are the only hiccups in an otherwise terrific presentation.

The DTS-HD Master Audio 2.0 mono track supplies clear, well-modulated sound. A wide dynamic scale embraces all the highs and lows of Henry Mancini's lush, string-laden score without a hint of distortion, and wonderful fidelity and tonal depth allow it to easily fill the listening space. Sonic accents are crisp and distinct, and all the dialogue is easy to comprehend. Best of all, no age-related hiss, pops, or crackle break the spell of this engrossing drama.

All the supplements from the 2004 DVD have been ported over to this Blu-ray release.

Many movies have been made about alcoholism, but Days of Wine and Roses is one of the best. Harrowing, heartbreaking, raw, and real, director Blake Edwards' cautionary chronicle of a loving couple's spiraling descent into addiction remains just as affecting today as it surely was at the time of its release 57 years ago. Jack Lemmon and Lee Remick give unforgettable performances in this emotional, often difficult-to-watch film that paints a frightening portrait of alcohol's destructive powers. Warner Archive's brand new, vibrant 4K restoration heightens the drama's impact, while lossless audio and a couple of interesting supplements complete this impressive Blu-ray upgrade. Highly recommended.

Sale Price 17.99
Buy Now
3rd Party 15.95
In Stock.
See what people are saying about this story or others
See Comments in Forum
Previous Next
Pre-Orders
Tomorrow's latest releases