Jazz, race relations, and bootleggers burn up the screen in Francis Ford Coppola's newly restored and greatly improved The Cotton Club Encore. With restored plot lines and important character moments, a beautiful mess of a film finds its soul. Lionsgate delivers The Cotton Club Encore to Blu-ray in a two-disc Blu-ray/DVD/Digital HD set. The A/V presentation is beautiful material highlighting the beautiful visual styling. Bonus features are sadly on the light side. If you only remember the original 1984 cut, it's time to give The Cotton Club Encore a chance to impress you. Highly Recommended.

The Cotton Club was the center light of Harlem in segregated New York. Owney Madden's (Bob Hoskins) and French Demange's (Fred Gwynne) club offers incredible entertainment from black performers such as tap-dancing Sandman Williams (Gregory Hines) and his brother Clay (Maurice Hines). The liquor flows freely thanks to bootlegger mobsters like Dutch Schultz (James Remar) and the place is packed by the white elites of the city. Jazz coronet player Dixie Dwyer (Richard Gere) just wants to find his place with his head above water and out of trouble. But when his eye catches Schultz's mistress Vera (Diane Lane), trouble isn't far away. It ain't real life, it's just Jazz. 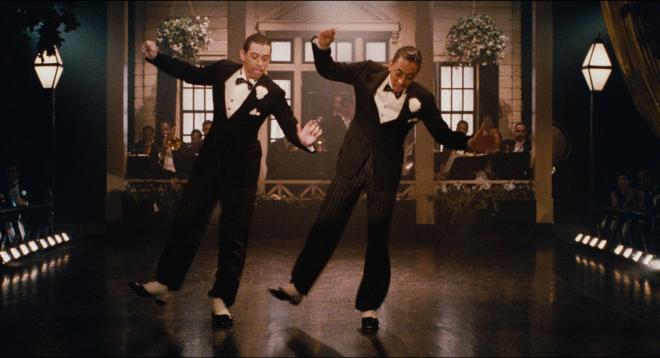 Long about the time I was finally introduced to The Godfather and Apocalypse Now, I felt the need to devour Francis Ford Coppola's catalog of films. He had some ups like The Conversation, Finian's Rainbow, and The Outsiders - The Cotton Club felt like the biggest missed opportunity. There are a lot of stories about why this movie bottomed out and failed to win over critics and audiences. Some blamed production extravagance, some the controversy of producer Robert Evan's association with a murdered financier. Others blamed the compromised final cut on top of numerous production woes. With all of the finger-pointing, it's damn near impossible to glean an impartial assessment of where everything went wrong. The Cotton Club Encore clears up one side of that sordid story with its richly expanded runtime.

With nearly 20 extra minutes of breathing room, The Cotton Club now feels like a movie with a soul. It's still imperfect. I wouldn't put it in Coppola's top four of The Godfather 1&2, The Conversation, and Apocalypse Now - but it's now a career highlight when it used to feel like an embarrassment. By allowing some of the side characters, performance numbers, and additional several sequences room to breathe, the film feels like it knows what it is now. With more time spent with Sandman and his brother Clay, we get a more balanced image of the infamous night club that prominently featured black performers - but wouldn't let them walk in through the front door. With more time spent with Dixie Dwyer and his brother Vincent (Nicolas Cage), we can appreciate the balancing act of mob-run New York and the dangers of being a part of it.

While this new cut of The Cotton Club fixes a number of issues, it's still imperfect. I did greatly enjoy this new cut and I would damn near say I "loved it," but my biggest gripe with the original cut of the film remains: it's still not long enough - in particular, the opening act. The necessary time spent to introduce all of the characters and their relations to each other is pushed through as if it were on the Pelham express train. You barely learn character names let alone that some of them are actually genuinely related to each other before it just barrels into the A-Plot. All of a sudden a bomb's gone off and people are shooting each other and someone's been stabbed in the neck! While things eventually smooth out, it's always been ironic to me that a movie prominently featuring some of the most impressive musical talents in one film takes that long to find its rhythm.

Even imperfect is better than the mess that The Cotton Club used to be. Encore allows Coppola to take another crack at one of his biggest missed opportunities. The film was already visually beautiful and featured some incredible musical performances - but now it feels like it has something genuine to say without being a simple period romance drama stuck in a mob movie. We now have a parable about how the 1930s wild age of Jazz and Prohibition ensnared a variety of colorful and talented individuals. Some got away clean, others got buried. The Cotton Club Encore gives this film a new life and a reason to reevaluate its place in Francis Ford Coppola's incredible career.

The Cotton Club Encore arrives on Blu-ray in a two-disc Blu-ray + DVD + Digital set courtesy of Lionsgate. Pressed on a Region A BD-50 disc, the discs are housed in an eco-friendly 2-disc case with identical slipcover artwork. The disc loads to upcoming Lionsgate releases before arriving at an animated main menu with traditional navigation options.

NOTE: The Cotton Club Encore will be available in 4K UHD Digital only, once our review code is active we'll be doing additional coverage of this title ASAP. 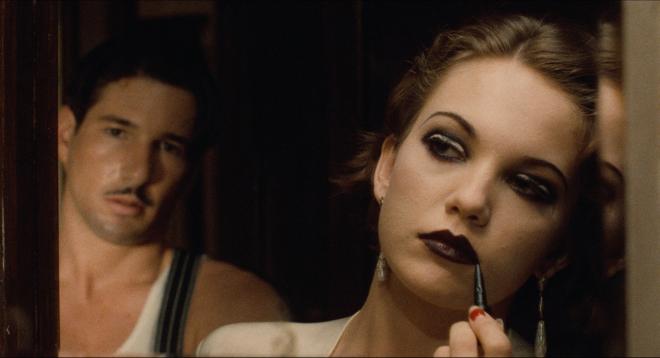 The Cotton Club Encore dances its way onto Blu-ray with an often stunning 1080p 1.85:1 transfer. I had a professor in school who called this film "Diet Godfather" because the story takes place roughly around the time frame of the flashback sequences of The Godfather Part II, has lots of mobsters, and the production design and Stephen Goldblatt's beautiful cinematography were all designed to invoke a feeling of those films. And I can't argue against that point here. Film grain is thick to give it an older look and feel and the film favors brown/orange tones. Blacks can also get a little heavy in places and cause a tad bit of crush in some instances with all of the black suits standing around in shadows. It's also pretty easy to spot some of the newly inserted scenes as they don't quite look as "finished" as the rest of the film. They look great overall, it's not like the obvious inserts for Richard Donner's cut of Superman II or anything like that. At the same time, they're not quite as seamless as Coppola's recent tinkering of Apocalypse Now.

99% of the time the film looks amazing. Details in clothing, set design, and facial features come through with crystal clarity. If you're a costuming nut you'll have a lot to look at and appreciate here. As I mentioned Colors favor the brown/orange tones but primaries still find room to pop - blood reds especially earn their place. During the many performance numbers, spotlights and house lights allow beautiful blues, reds, yellows, and every shade in between to flourish. Skin tones are again subject to the lighting scheme at times but for the most part, everyone looks healthy. Black levels are for the most part on point allowing for great shadow separation and wonderful image depth with only occasional dips toward crush territory. Free of any notable age-related anomalies the image sports a wonderful film-like appearance. I hadn't seen The Cotton Club since school so I'm working against memory of an old DVD, but this new Blu-ray is pretty beautiful stuff and any small peccadillo is quickly forgotten when the song and dance numbers enter the scene. 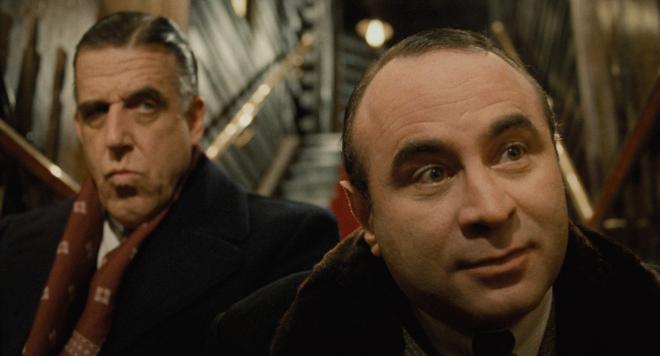 The Cotton Club Encore arrives with a robust Dolby Digital TrueHD 5.1 audio mix. Several sequences of the film are deceptively front/center conversational moments where you don't really think much else is going on with the mix. A hotel room tryst early on with Dixie and Vera feels pretty flat with dialogue getting the biggest push, but the sides and rears open up the mix to give the tiny room a sense of claustrophobia or allow for deep background street sounds a little tingle to set the scene while John Barry's lush score sweeps in. When the show moves to the Cotton Club performances or when Sandman takes his girl out to show off with the tap dancing sequence - the mix really opens up beautifully. Those taps resonate and move around the space giving the mix a terrific soundscape to play in. Likewise, when the mobsters go to war - machine gunfire sounds echo around and have a terrific punch. Dialogue is clear throughout and is never hindered by the rest of the mix. All in all, this is a terrific track that captures the film's sonic depth. 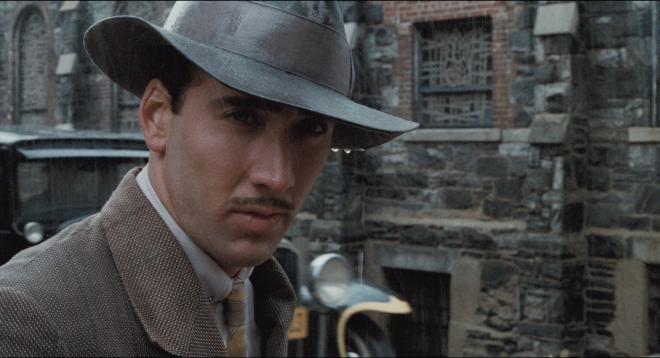 Considering all things, I'm actually a bit surprised there aren't more robust bonus features for this release. Not even a commentary track. Coppola's introduction and the Q&A at the New York Film Festival are interesting, but not as much in-depth information as I would have liked to see.

The Cotton Club has long been viewed as a hot mess within Coppola's catalog. A well-intentioned gangster and jazz epic that didn't find its footing. Whether it was the strained production, the combative editing process, or just plain bad timing - Encore rights the path of the film. With the reinserted material, The Cotton Club finally feels like it has heart, soul, and rhythm. It's still not quite perfect compared to Coppola's previous efforts, but this tap dancing epic has new legs. If you thought you saw all The Cotton Club had to offer - it's time to take a look at Encore.

The Cotton Club Encore arrives on Blu-ray courtesy of Lionsgate in a two-disc set with a digital copy. The image sparkles in 1080p with only a couple small nagging quibbles keeping it from being a perfect transfer. The Dolby Digital TrueHD track kicks with plenty of life and surround presence and fully captures the incredible song and dance numbers. It had been years since I saw The Cotton Club, but watching Encore felt like seeing a whole new and vastly better film. It's absolutely worth checking out and reevaluating its place in Francis Ford Coppola's filmography. Highly Recommended.

Sale Price 13.84
List Price 19.99
Buy Now
3rd Party 13.83
In Stock.
See what people are saying about this story or others
See Comments in Forum
Previous Next
Pre-Orders
Tomorrow's latest releases