Director Jon Favreau's The Lion King pushes the boundaries of digital filmmaking but fails to do the same for the plot of the dearly-beloved Disney animated classic. The photorealistic remake debuts on Blu-ray with reference-quality video, good DTS-HD MA soundtrack but a small assortment of supplements. Nevertheless, the overall package is Recommended.

You can read our full thoughts on Jon Favreau's The Lion King in our review of the 4K Ultra HD Blu-ray HERE. 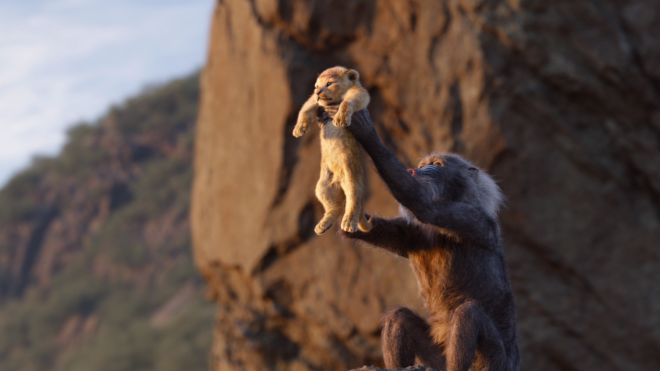 Walt Disney Studios Home Entertainment brings The Lion King to Blu-ray as a two-disc combo pack with a flyer for a Disney Digital Copy. The Region Free, BD50 disc sits comfortably opposite a DVD-9 copy of the movie. Both are housed inside a blue, eco-vortex case with an embossed, glossy slipcover. At startup, the disc commences with skippable trailers before switching to a menu screen with the standard options, music playing in the background and full-motion clips. 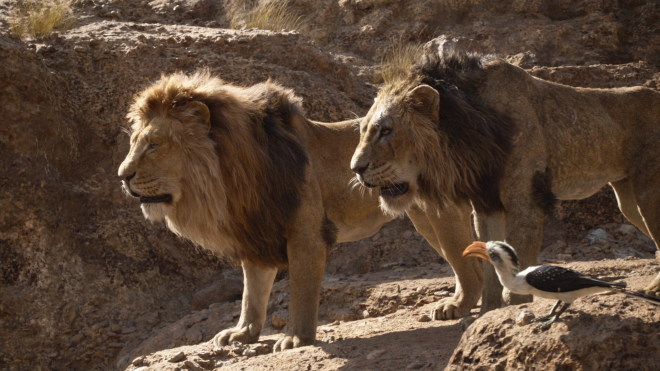 The photorealistic remake debuts on Blu-ray with a spectacular, reference-quality 1080p/AVC MPEG-4 encode that is sure to mesmerize viewers with the amazingly realistic panoramic views of the Pride Lands. The individual hairs of each lion and hyena are razor-sharp from beginning to end, each leaf and blade of grass is crystal clear from a distance, and we can plainly make out every crevice, fissure and pockmark in the rock formations. The tiny furrows, creases and wrinkles of Pumbaa are strikingly detailed, and the craziest aspect is seeing the unique textural features in Zazu's feathers. Resolution dips ever so slightly in a couple sequences, but they are easily excused as the result of the creative intentions.

Presented in a 1.78:1 aspect ratio, the freshly-minted transfer comes home with spot-on contrast, showering the many African landscapes with pitch-perfect, brilliantly beaming whites and dazzlingly crisp highlights. On the other end of the grayscale, black levels are inky rich from beginning to end, showing impressive gradational differences in Pumbaa's dark charcoal skin, Scar's ashen-colored scar and in Zazu's obsidian feathers. At the same time, every minute detail within the darkest corners is plainly visible while pitch-black shadows penetrate deep into the screen, providing the action with a lovely three-dimensionality quality. The photography of Caleb Deschanel also benefits tremendously as the palette glows from a vibrant, sumptuous array of primaries. The creative cinematography favors a more earthy-brown gamut with lots of amber oranges and golden yellows while the evenings bathe the sky in a gorgeous blend of soft pinks, violet and deep indigo blues. (Video Rating: 96/100) 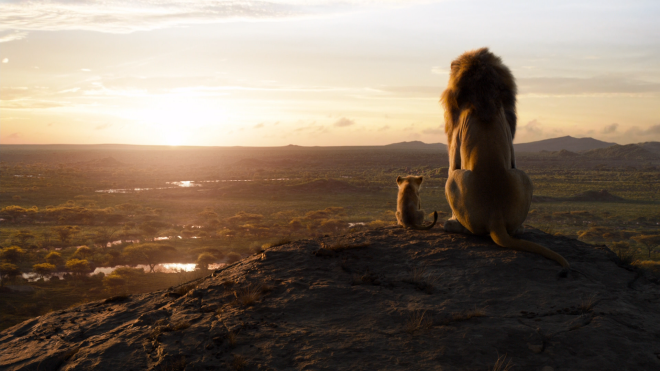 The CG-animated creatures come to life on Blu-ray thanks to a DTS-HD Master Audio 7.1 soundtrack that overall is quite excellent and satisfying if also somewhat underwhelming in a couple spots.

As seems typical of most Disney releases, in order to better appreciate some of the audio's more positive aspects, owners will have to raise the master volume a few decibels, which for me was -5 from reference. After doing so, listeners will enjoy distinct clarity and outstanding definition in the mid-range while the score and songs display strong fidelity and warmth. However, the design also feels somewhat restrained and uniform, as it never really pushes far into the upper frequencies, even during the biggest action sequences.

Of course, priority is placed on the conversations above all else, delivering excellent precision and clear intonation in the vocals. The low-end, on the other hand, could be stronger and more dynamic, as some areas feel a tad lacking, but on the whole, bass is nonetheless effective and adequate with a weighty punch when called upon, such as the thunderstorms and the lions' roars.

Likewise, rear activity is on the lighter side for a newer release such as this, giving more preference to the on-screen action. Nevertheless, a wide and spacious imaging comes with lots of background noise evenly and smoothly moving between the three front channels. Occasionally, some of those atmospherics will extend into the sides, nicely broadening and expanding the soundfield for a welcomed bit of light envelopment during certain sequences, namely the climactic showdown. However, it's not always enough or particularly consistent for generating an immersive soundscape, except for the larger action pieces like the aforementioned battle or when the young cubs wander into the elephant graveyard. (Audio Rating: 84/100) 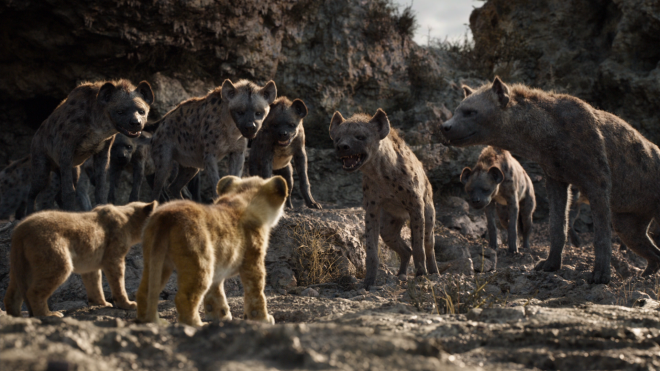 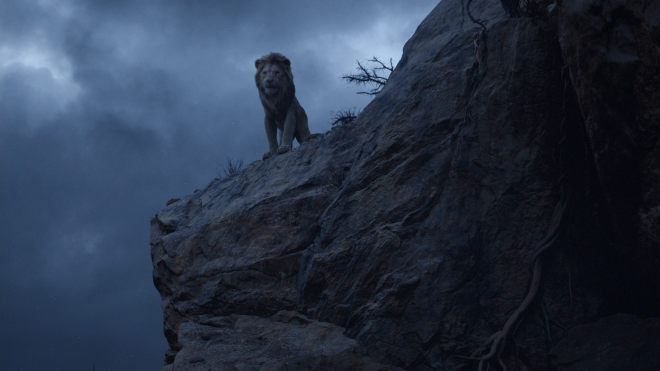 On the one hand, director Jon Favreau's The Lion King is a genuine marvel of digital filmmaking, sure to mesmerize audiences with the stunning realism of the CG-animated creatures on screen. However, on the other hand, pushing the boundaries of technology as a reason for remaking a traditional-animated Disney classic makes for an empty and rather disappointing effort as it simply duplicates the original without offering much new to the plot. Nevertheless, the photorealistic CG-animated remake debuts on Blu-ray with a reference-quality HD video presentation and a generally satisfying DTS-HD MA soundtrack. With a still decently good assortment of supplements, the overall package is recommended.

Sale Price 10.73
List Price 19.99
Buy Now
3rd Party 1.25
In Stock.
See what people are saying about this story or others
See Comments in Forum
Previous Next
Pre-Orders
Tomorrow's latest releases