In Northern Italy, WWI has turned into a bloody stalemate. Bogged down in their trenches on a barren highland, the men of an Italian infantry division have been given one objective: retake a commanding height from the enemy. Unfortunately, the tactical ingenuity of general Leone (Cuny), the unpopular division commander, consists of supplementing frontal attacks against machine-guns with medieval fighting schemes. His dispirited troops must be prodded with ever harsher measures into storming the Austrian positions. As casualties mount, indignation spreads amongst the rank and file. Disturbed by the decisions of his superiors, lieutenant Sassu (Frechette) is progressively led to question the purpose of the war and to reconsider where his real duties lie.

Brooding, pensive and littered with panoramic scenes of battle which ironically feel sorrowful, Francesco Rosi's 'Many Wars Ago' ('Uomini contro') is a war drama ripe in deliberation and a wistful sense of purpose so understated that it's easy to overlook. Conversations and events from one scene to the next occur with very little connection between them except that they often involve the same characters. Feeling like vignettes almost randomly pieced together with some small thought to a larger design, the deliberatively episodic narrative builds toward something, only to collapse in frustration as if from a lack of motivation. After experiencing constant anxiety with an acute awareness to one's mortality, it all comes to a close with a noticeable sense of insignificance and meaninglessness.

Set during one of the more famous clashes of World War I, the Battle of Asiago, Italian soldiers live within the comfort of the trenches, holding the invading Austrians at bay while chatting mundanely about their lives. There is a sense of camaraderie among the men, but an air of apprehension underscores their attempts to ignore their circumstance. Fear and the anticipation of death is an endless reality for them, and their commanding officers almost sadistically remind them of this, ineffectually ordering the men to storm the enemy, ordering them to die horrifically. A young lieutenant (star of several Italian westerns, Gian Maria Volonté) is the only man within the ranks to question the logic of treating soldiers like expendable fodder, preferring the company of those under his command than those issuing absurd orders with a twisted sense of honor and glory.

Based on the novel by politician and revolutionist Emilio Lussu, which he loosely based on personal experiences from the actual battle, the story, co-written by Rosi with Raffaele La Capria and Tonino Guerra, follows the internal struggle of these men with a chilling and effective realism. Cinematographer Pasqualino De Santis captures the conversations and arguments of disobedience with a pragmatic and emotionless camera, complemented by a downtrodden palette that shows very little color. It's impressive to watch as if events simply occur out of thin air, but the viewer knows tensions have been brewing for some time. The officers are only surprised by the acts of insubordination and attempts of rebellion because they never paid heed to the strain they put their soldiers under. 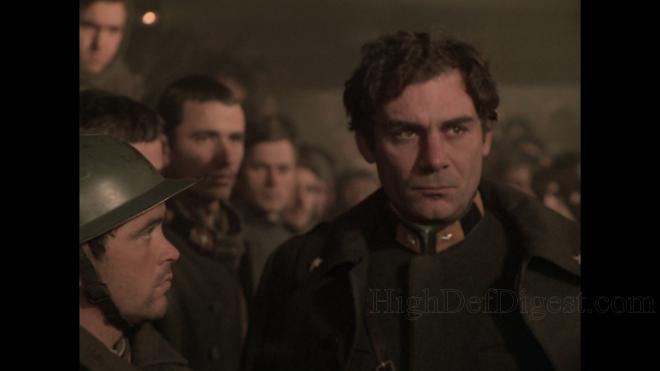 This is where ultimately the 1970 film succeeds and remains just as poignant as ever. Produced and released at a time when this particular genre of Italian cinema, affectionately called "Macaroni Combat," was at its height, like  'Anzio' and 'Hornets’ Nest,' Rosi explores the sometimes irrational decisions of war, and perhaps at a more subtle level, the insanity and absurdity of war in general. Those with the power to command the disenfranchised and mostly illiterate men did so with an arrogant outlook for something grandeur which the soldiers neither understand nor care for as the reason for fighting. One very telling scene, the major (Franco Graziosi) holds a soldier's bayonet asking what everyone sees, but no one is able to give him a satisfying answer because they only see what is literally before them. It's a funny but also incredibly sad sequence where the major fails miserably to give his men an inspiring speech to motivate them to die for a cause they cannot fathom.

Francesco Rosi splashed onto the Italian scene in 1958 with 'La sfida,' a splendid drama of neo-realism about the secret crime organizations. In later years, he would direct 'The Mattei Affair' and 'Lucky Luciano,' which follow similar themes about corruption and violence as the result of greed. In 'Many Wars Ago,' he applies his realist approach to the material with efficiency, demonstrating a completely different form of corruption and violence. This time within the ranks of the common man as patriotic soldier and not where money-exchange is involved, but instead the soul and morality is the currency. It's a powerful film on how trench warfare and the sometimes senseless, injudicious tactics of superiors wear a man down to nearly nothing. Dark and ruminating, 'Many Wars Ago' (aka, 'Men Against') is an extraordinary war film fans of Italian cinema ought to appreciate.

Raro Video brings 'Many Wars Ago' to Blu-ray on a Region Free, BD25 disc inside a blue, eco-lite keepcase. Along with a cardboard slipcover, the package includes a 19-page booklet with an insightful essay by author Lorenzo Codelli, reprints of two interviews with the director, a short biography and a great collection of excerpts from reviews throughout the decades since the film's release. At startup, the disc goes straight to a main menu with full-motion clips and music.

The quietly complicated war drama invades Blu-ray with a great-looking 1080p/AVC MPEG-4 encode (1.33:1), considering the film's age and history. According to a text at the start of the film, the restoration and remaster was made from a duplicate negative from the Italian National Film Archive, so a few fluctuations in the color grading are to be expected. For the most part, however, the source appears to be in excellent condition, providing plenty of excellent detailing in the foliage, uniforms and facial complexions. Contrast can seem a bit dull, but it's stable and consistent with brilliant, crisp whites. Black levels are also strong and mostly accurate, but shadows tend to engulf the finer details. The color palette is also on the gloomy side, which could be deliberate, but primaries are cleanly-rendered nonetheless. Overall, the high-def transfer is very good.

Like the video, the DTS-HD Master Audio mono soundtrack was made from the same duplicate negative, and the results are pretty good and satisfying. Imaging offers a generally pleasing and engaging presence, especially when Piero Piccioni's dispirited musical score comes on, noticeably broadening the soundfield. In spite of the obvious dubbing work done in the production, vocals are clear and well-prioritized in the center, though they sometimes also feel hollow and empty. Actions sequences come with plenty of good clarity in the background and mid-range, but there are also moments of distortion in the high-end and low bass is rather listless. Nonetheless, the lossless mix is strong and get the job done.

Brooding, pensive, and littered with panoramic scenes of battle which ironically feel sorrowful, Francesco Rosi's 'Many Wars Ago' ('Uomini contro') is a war drama ripe in deliberation and a wistful sense of purpose so understated that it's easy to overlook. Starring Gian Maria Volonté, it's a powerful motion picture on trench warfare and the sometimes senseless, injudicious tactics of superiors, an extraordinary war film that fans of Italian cinema ought to appreciate. The Blu-ray from Raro Video arrives with the best possible video presentation and very good lossless audio. While supplements are pretty small, the curious and aficionados will be happy with the overall package and should give it a look.

Sale Price 28.98
List Price 34.95
Buy Now
3rd Party 21.98
In Stock.
See what people are saying about this story or others
See Comments in Forum
Previous Next
Pre-Orders
Tomorrow's latest releases