The Conjuring franchise continues to spiral outward in the third spinoff of the prequel with this semi-sequel Annabelle Comes Home. While the Warrens make a cameo, this entry focuses on their "gifted" daughter and the ramifications of what happens when one of her babysitters opens up Annabelle's cage. The show is pretty tired by now but there is still something oddly comforting in this brand of entertainment. Warner delivers a first-rate Blu-ray experience with a solid video presentation and another moody and effective Atmos mix. If you dig The Conjuring-verse there aren't any surprises here but it's still enjoyable. At the very least it's Worth A Look.

Ed Warren (Patrick Wilson) and his demonic vision-gifted wife Lorraine (Vera Farmiga) have got another 70's-era demonic case to solve. Not wanting to bring their dear daughter Judy (Mckenna Grace) with them, she's left in the hands of her babysitter Mary Ellen (Madison Iseman). After the Warren's become famous for their cases, Judy is the target of bullying at school, and Mary Ellen's best gal pal Daniela (Katie Sarife) is curious about the spooky things within the Warren house. Inviting herself over for the babysitter party, Daniela unwittingly unleashes hell within the house after opening the dastardly Annabelle's case! 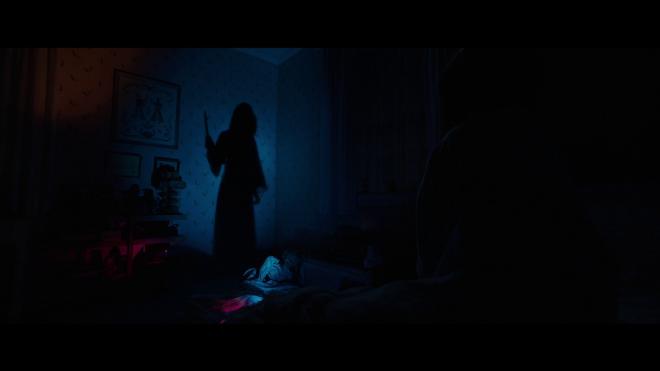 Nothing this franchise can offer will ever hit the heights of The Conjuring. Spinoffs and stale sequels just can't muster that sense of nostalgic freshness of practical effects and well-timed jump-scares that James Wan brought to the screen in 2013. I know that going into each of these movies. I don't expect amazing, I expect diverting entertainment. For the most part that's what I get and I'm happy. While not a good movie in any way The Curse of la Llorona at least had some moments of interest to it and I had a decent time with The Nun even though that was a tonal misfire. Annabelle Comes Home is more of this sort of bland sameness but the feel of the trapped atmosphere, some decent performances, and a couple of good set-pieces more than makes up for those last couple side ventures.

Writer Gary Dauberman who has had a hand in these Conjuring spinoffs promotes himself to the Director's chair this outing and I have to admit the man has a flair for timing, pacing his jump scares, and genuinely giving the action some heft and purpose. There are some genuinely tense moments throughout with some great creepy bits peppered throughout the show. The problem is this is now the sixth sequel/spinoff in this franchise. In slasher movie terms this is where we get Friday The 13th Part VII: The New Blood and Halloween: H20. Sure there are some cool bits, but there's nothing fresh or exciting because all of the scares are predicated on familiar setups and payoffs. You know that creepy demon is gonna pop out of the shadows. It's not a question of if but when now. And truthfully, that Annabelle doll is just not that scary. The etherial possession rather than a genuine physical presence is just old hat now. I kept expecting that doll to finally come alive and start slashing some fools up - but that'd be Childs Play…

This isn't to say The Conjuring franchise doesn't have some air left to breathe, it does, it just needs to take a break. These movies have been hitting at a rate of nearly two a year now and that's just too much of something that's just becoming mediocre. With The Conjuring 3 and The Nun 2: Nun Too Soon rumored to be coming out in 2020, I have hope these will be chilling adventures but it's all starting to feel old hat. This isn't to say that I didn't like or wasn't entertained by Annabelle Comes Home - I was - but it'd been a better movie if it hadn't been released so closely to so many other entries in this spooky franchise. I'm now just waiting for a Conjuring and Scooby-Doo crossover movie - at least that'd be something different! Imagine Fred arguing with Ed while Velma and Lorraine try to figure things out as Daphne just does her thing with Shaggy and Scooby hiding with the kids but keep the R-rated horror. I'd genuinely like to see that movie.

Annabelle Comes Home to Blu-ray thanks to another fine effort from Warner Brothers as a two-disc Blu-ray + DVD + Digital Set. The discs are housed in an eco-friendly two-disc case with identical slipcover artwork. The disc loads to a static image main menu with traditional navigation options. 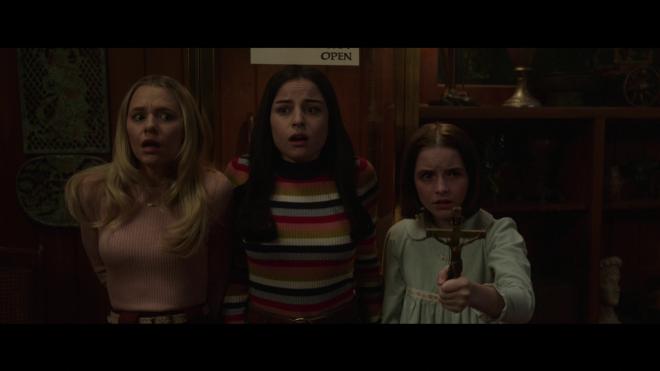 All of the Conjuring films to-date have been pretty dark and ominous affairs with bleak visuals allowing for only momentary flourishes of color. Makes sense considering the movies - those shadows need to be dark and inky and Annabelle Comes Home doesn't disappoint. The scares of this film are dependent on those dark spaces and the film makes great use of minimal lighting to work in a few jumps. However, the issue that holds this presentation back - and not one I experienced with other releases - is video noise. It's odd because it's not always distracting, but it's present enough to be noticeable - especially during the dark bits where the image could take on a hazier quality holding it back from true black.

With that little peccadillo out of the way, I have nothing but glowing things to say about the rest of the image. Colors - when they're present - are beautiful with nice primaries and 70s-themed browns and golden tones. There is a great gag when a rotating color wheel projects the doll's shadow on the wall and with each passing color the shadow changes. It's one of the genuinely great moments of the movie and the colors and shadows work terrifically together. Details are also impressive across the board. I wasn't able to determine the intermediate this was finished on, regardless it looks great offering fine facial features, clothing details, and production design intricacies. After The Nun, I was hoping this franchise was moving onto 4K UHD but alas that not the case with this one - at least not on a physical disc. 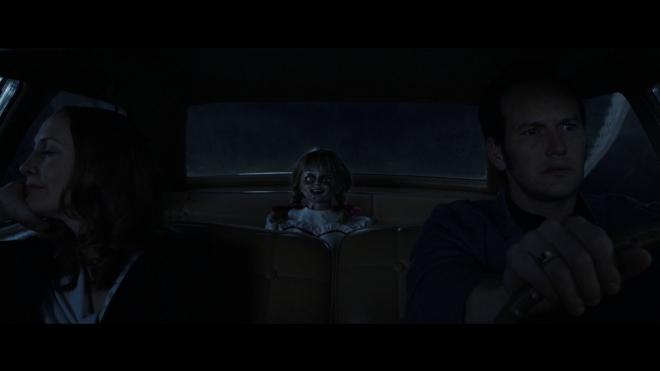 Audio has never been a shortcoming with these movies and Annabelle Comes Home is packed with another sonically rousing and hair-raising Dolby Atmos audio mix. While I know most folks don't care for jump scares, I dig them simply because they allow a horror movie moments of dead silence interrupted by some great punch of sound effects and music. This flick keeps that pattern but it makes great use of the atmospheric placements for sides, rears, and overheads. I really liked how the mix built with the pace of the film allowing for the personal quiet moments to be even and calm but still active with subtle effects to keep the channels alive. When that last act kicks in, all hell breaks loose - in a good way! Levels are spot on without any softness or need to adjust anything. For The Conjuring series, one could call this par for the course, but that is still far better than average! 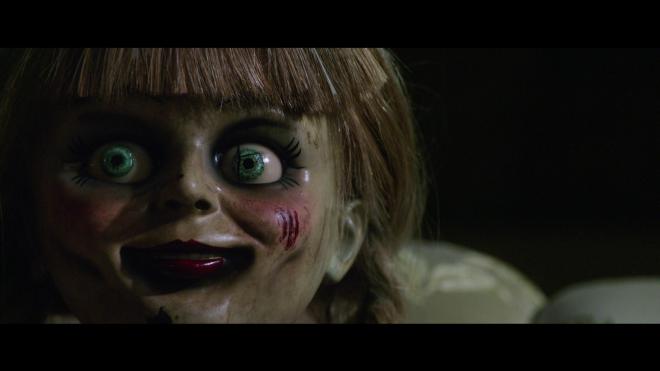 Bonus features are alight - they might not be lengthy and they're mostly EPK talking head pieces, but they're solid. The deleted scenes are actually some decent stuff and helped round out a couple of scenes. I can see why they were cut for pacing but they could have picked up some of the film's shortcomings. 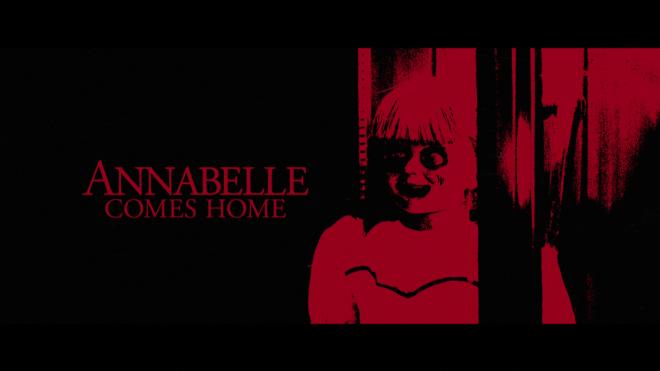 I wouldn't tell people to avoid Annabelle Comes Home, but I wouldn't tell them to expect great things either. It's more of the same and not always in a good way. Even with the admittedly fresh house of horrors plot setup, the film uses the same run of scare setups that scares aren't all that scare and jumps lack the adrenal jolt one hopes for. It's entertaining, but you can feel how stretched the franchise has become.

Warner Brothers brings Annabelle Comes Home to Blu-ray with a solid if still slightly troubled video transfer that deals with a couple of noise issues - but damn - they can really cook an Atmos mix! Bonus features are a bit limited but they're still interesting. No, this still isn't the worst this franchise has offered up, but its nothing altogether original or exciting either. It's reliable, but not always memorable. At the very least if you've seen everything else The Conjuring has offered thus far, this one is at the very least Worth A Look.

Sale Price 12.96
Buy Now
3rd Party 49.99
In Stock.
See what people are saying about this story or others
See Comments in Forum
Previous Next
Pre-Orders
Tomorrow's latest releases