Blinded by the Light

Blinded by the Light follows a bumbling high school student who loved poetry, but seems to be going nowhere in life. He hears Bruce Springsteen's music for the first time, which changes his thoughts and sends him on a journey of self-discovery and peace. Warner Bros. brings this to life in a 1080p HD transfer with a Dolby Atmos track. A few extras are also included on the Blu-ray disc. Recommended. 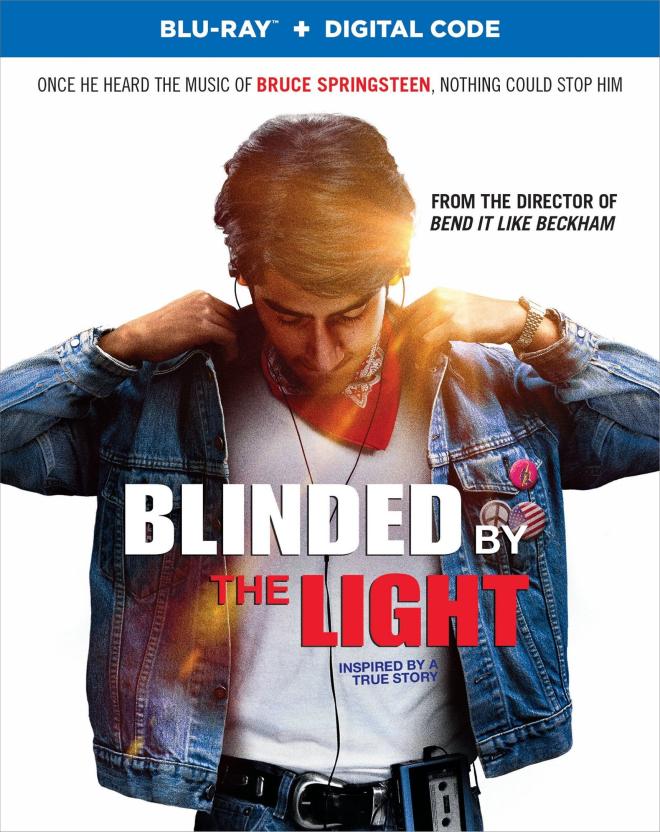 Bruce "The Boss" Springsteen's music changes a British born teenager's life, whose Pakistani parents disapprove of the new film Blinded by the Light. Based on journalist Sarfraz Manzoor's life and directed by Gurinder Chadha (Bend It Like Beckham), this English 1987 setting sheds light on a turbulent time where racism was rampant for people of color. Like Bend It Like Beckham, Chadha focuses on the lead's charm to get us from start to finish with a killer Springsteen soundtrack and a good message, even if the film has some corn-ball sequences throughout.

The film follows a 16-year-old student named Javed, who comes from strict Pakistani parents and his two sisters. Javed writes depressing poetry and is at a loss to find friends, while his parents are met with racism in the workplace and neighbors. Starting the new school year though is about to change the course of Javed's life. He has a new English teacher (Hayley Atwell) who is about to discover his writing ability, a romance brews with a fellow-student, and he becomes best friends with a classmate named Roops who gives him two cassette tapes of Bruce Springsteen.

From here, Javed's mind is blown and realizes that The Boss holds "the direct line to all that's true in this shitty world", where Javed begins to write poetry and essays inspired by the lyrics of Springsteen. All of his work and fandom leads him to the states, while he has a falling out with his family. There is nothing new or original to keep you on your toes here, but the likability of Javed nad Chadha's ability to weave a story based on Springsteen's songs is quite enjoyable that will leave you singing out loud.

The big issue with the film is that it feels heavy-handed with showcasing montage scenes to The Boss' tunes that might make you roll your eyes in the back of your head, such as when the song "Born to Run" plays out. Still, there's a lot to like and laugh at here, including when Javed's obsession has him dressing like Springsteen with the denim, red bandana, and big hair from the 80s. The rest of the film is rather predictable to a fault, sprinkled with some super cheese, but at the end of the day, Blinded by the Light is a winner for its lead actor and music.

Warner Bros. plays its top hits with Blinded by the Light on Blu-ray + Digital. The disc is housed in a blue plastic case with a cardboard sleeve featuring the lead star. You'll find the digital code that you can download for iTunes inside. 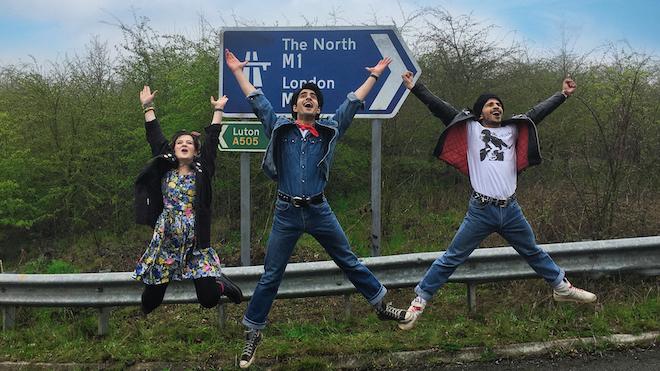 Born onto Blu-ray with a 1080p HD transfer in 2.40:1 aspect ratio comes Blinded by the Light. The detail is crisp and the wide spectrum of colors looks beautiful in this Springsteen inspired comedy-drama.

Colors are vivid and bright throughout with excellent primaries that are striking. The blue denim and red bandanas make a deep impression every time they are on screen. Since the film takes place in the 1980s, you can expect a ton of wild colors in the clothing that liven up each scene. Outdoor shots showcase a variety of greenery in trees and brown and orange buildings that all look great against a bluish-gray sky. Black levels are mostly inky in lower lit scenes, which never give way to crush. Skin tones are always natural as well.

The detail is strong with wonderful wide shots of the city along with superb closeups that reveal all the fine elements of the actor's faces. Individual facial stubble and hair along with makeup blemishes can be easily seen in every light setting. The comprehensive stitching in all the denim and wardrobe stands out nicely too. Wide shots showcase decay in brick buildings and in the houses as well but also captures the essence of the 1980s perfectly.

Lastly, there are no video issues with banding, aliasing or major video noise that makes this 1080p HD image completely satisfying. 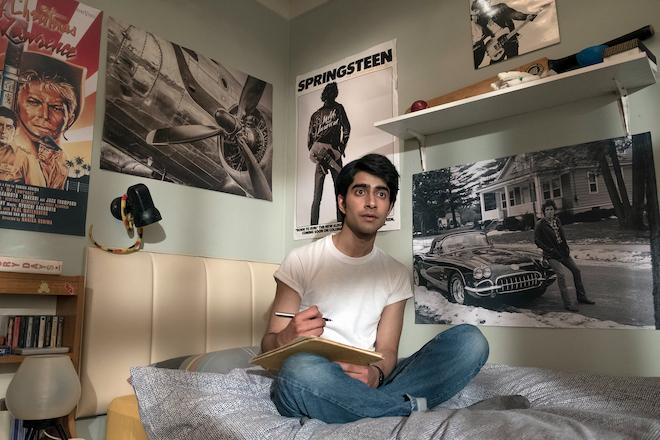 Warner Bros. has included a Dolby Atmos track with Blinded By The Light, which sounds exquisite when the Springsteen tunes are playing at full force. Other than that, it's a relatively mediocre Atmos track, being that there are no major explosions or tons of bullets flying by. Instead, this is a dialogue-driven film with one mighty soundtrack.

There are several sequences where the Dolby Atmos kicks into high gear, including a scene in a crowded street market. With all of the necessary chatter, screaming, laughing, and commerce happening, there's an additional layer of sound effects and big use of Bruce's music, both through headphones and a bigger stage sound. All of these factors come together perfectly for an immersive experience as if you are in the center of the film, including the height speakers.

The balance between all of the sound effects and music is a good one, none of which overpower the other with the exception of when there is a montage with Springsteen's songs playing at full volume. Transitions and directionality are smooth and never aggressive and the bass hits a nice rumble when music is present. Lastly, the dialogue is clean and free of any pops, cracks, or hiss. 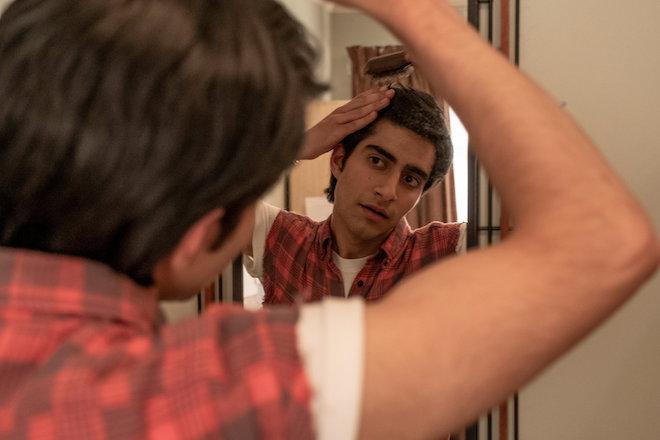 There are about 23 minutes of bonus material, including some interviews with the author, cast, and crew. A few additional scenes are included as well. 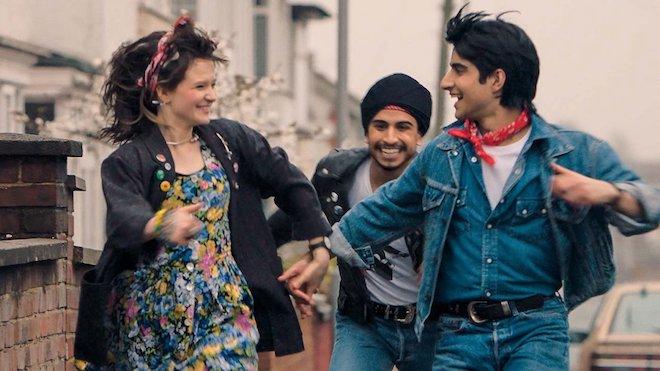 Blinded by the Light is an inspiring tale about am awkward teenager, living in tempestuous times with his family, where the music of Bruce Springsteen puts him on the right path creatively to live a fruitful life. It's just not executed in a perfect narrative way and relies more on the cheese aspect than anything wholly original. Still, the music is tremendous and the performances are solid. The video and audio contributions are great and the few extras are worth your while, even if Springsteen himself doesn't seem to be a big part of it. Recommended!