Herb Gardner's smash play A Thousand Clowns is deftly adapted for the big screen by Fred Coe. Jason Robards is a man whose mission to buck the system and refuse to conform to societal standards is threatened when his nephew could be taken away from his care by social workers. A truly humane drama, Robards commands the screen in one of the best roles of his career. Kino Lorber Studio Classics delivers A Thousand Clowns to Blu-ray with a solid A/V presentation and a great new interview with star Barry Gordon. A wonderful film finally gets its long-overdue Blu-ray release - Recommended.

"Nick, in a moment you're going to see a horrible thing."

Murray (Jason Robards) steadfastly refuses to be one of the sad lemmings who wake up every day and commit the worst sin possible - to go to work. A talented scriptwriter for local television - Murray could have it all, but he can't stand the routine. He needs a prescribed amount of chaos to feel alive. And that's the lesson he's instilled into his nephew Nick (Barry Gordon) ever since Murray's sister left the child with him. The only problem is welfare worker Albert (William Daniels) and Sandra (Barbara Harris) view Murray's lifestyle as a detriment to Nick's wellbeing. Murray has one last chance to get his old job back with the help of his talent agent brother Arnold (Martin Balsam) and convince the bureaucracy he's a stable influence for the young boy. 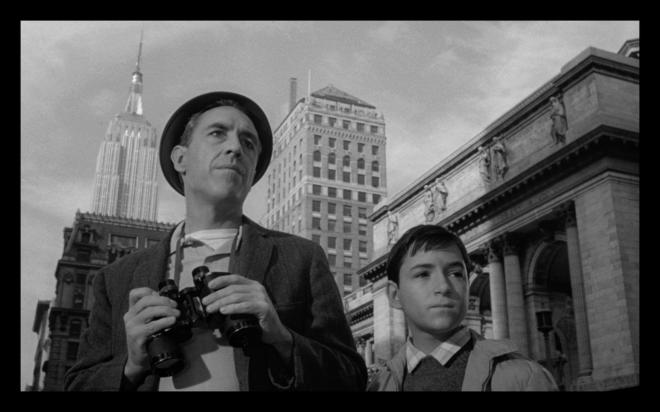 A Thousand Clowns is the perfect example of how a previous work - novel or play - can be adapted for a film. You don't have to shoot everything on the page to be faithful to the source material. By trying to be word-for-word with such a visual medium, you risk losing the soul of the work. Such is the case for A Thousand Clowns. By the page, Herb Gardner's excellent play would run an hour longer than this film filled with passionate speeches that would resonate on the stage, but fall short in a motion picture. After a disastrous first screening, Herb Gardner famously gave up his upfront screenwriter fee so he and director Fred Coe could reshoot scenes, recast a key role with a member of the original Broadway production, and add New York location shots all while making significant runtime cuts. The result is a near-perfect film adaptation that would be nominated for Best Picture and earn Martin Balsam is one and only Oscar for Best Supporting Actor.

I was introduced to A Thousand Clowns early in my relationship with my wife and it's become one of my absolute favorite movies. I was already a fan of Jason Robards, but he's in peak form here as Murray, a man of great talent and incredible character, but who doesn't fit in the prescribed mold of "normal" society. It's not that he doesn't like to work or resents his abilities as a writer, he just doesn't want to become a soulless faceless lemming that mindlessly goes to work, punches a time card, and goes home. Life should be experienced! And through young Nick, he has a chance to teach this life lesson to a younger generation. But at the same time, he has to be something like his older brother Arnold. He has to find a way to conform a little bit - enough to play by society's rules but still be himself.

Given the themes about a non-conformist who more or less refuses to grow up and be an "average adult," it's very easy to call A Thousand Clowns a counter-culture picture, but I feel like that pigeonholes this film. While it's certainly not about being average, it doesn't vilify people who punch a clock and go about their days. Everyone struggles with the person they are versus the one they want to be. There are some incredible speeches with William Daniels and Martin Balsam about their places in the world's routines. In a normal story, they'd almost be the villains trying to contain Murray's spirit, but they're actually two of the most tragic characters in the film as deep down they envy his free spirit. For Murray, the goal is how to find that middle balance of being productive in society's eyes in a way that doesn't make him go crazy. I feel like that's a problem everyone faces. We all would rather be doing something else with our day-to-day time. Most of us aren't lucky to call their hobbies a profession or get up and go to work loving what they do. For a lot of people work is simply marking time or collecting a paycheck - and that's damn sad.

Through it all, A Thousand Clowns sports a cast of terrific performances. Robards is in his element here as Murray. Future TMNT Donatello voice actor Barry Gordon shows an incredible range for a young performer as the wise beyond his years Nick. For me, the true dark horse performance comes from Martin Balsam. Balsam's always been a reliable character actor, but the scene he shares with Robards in the closed-down Chinese restaurant is beautiful stuff. You get to the heart of both men, but it's the rare moment that Balsam outshines his costar justly earning his Oscar. It's also fun to know that a few years later the pair would return together for All The President's Men in 1977 - where Robards finally won his overdue Oscar recognition.

As much as I love this movie, I haven't gotten to enjoy it very often. The first time I saw it was on TCM late at night. For years it wasn't available except for out of print VHS tapes and Laserdiscs and by the time it came to DVD it, it was through MGM's MOD program on a burned disc with a dated source that had choppy at best video quality with tinny audio. I'm glad A Thousand Clowns has finally made it to Blu-ray and sourced from a quality master. It's a movie everyone should see and be able to appreciate - and now they can!

Kino Lorber Studio Classics delivers A Thousand Clowns to Blu-ray in a single disc release. Pressed on a Region A BD-50 disc, the disc is housed in a standard case. The disc loads to a static image main menu with traditional navigation options.

I'm so used to A Thousand Clowns looking particularly rough around the edges so I'm very excited to see that A new 2K master was used for this 1.66:1 1080p transfer. As I mentioned in the review there are a number of pickup shots on location in downtown New York City and they're not as clean as the studio shots. Several sequences look like they were shot on the fly and possibly even without permits given the locations. These shots tend to have a few more scratches, thicker grain structure, and more speckling. There are a few soft shots here and there, but otherwise, the source for this new master is in great shape.

The interior shots of Murray's apartment room, the Chinese restaurant, and Albert's office are all in much better shape without scratches or speckling. Throughout the film, a terrific amount of fine detail is present. Facial features, clothing textures, and the intricacies of Murray's apartment are all available for close observation. The black and white photography allows for nice deep inky blacks with bright natural whites with terrific shadow gradience in between. As I already spoke of, the Chinese restaurant scene with Murray and Albert is beautiful stuff as each actor moves within the shadows of the rundown place. Considering the rough home video history to date, this is a massive improvement and should please fans.

A Thousand Clowns also earns a nicely rendered if generally non-dynamic DTS-HD MA 2.0 mix. Since this was sourced from a play, there are really all of three locations, Murray's apartment, Arnold's office, and the abandoned Chinese restaurant. When the film breaks away into the streets of New York City, there was little - if any - location sound as all of the dialog is very obviously dubbed in and little to no street sound to give you the feeling you're in the heart of the Big Apple. To that end, aside from some march music to punch things up here and there, this one is entirely conversational. With that, dialog is clean and clear throughout without any issues. Gone is the tinny shrill quality I noticed in previous MOD DVD and VHS releases - so that's a major plus. Just the same, this isn't a very dynamic mix. There aren't any diegetic sound effects of note or anything to setup the sense of atmosphere and placement. For this film, it gets the job done.

For such a great movie with a rich history on the stage, it's a bummer there isn't a more robust bonus features package but the new interview with Barry Gordon is a treat as he details how he got started singing and acting at a very young age and how he landed the part of Nick, ran the show on Broadway, worked with the touring company, and did the movie. It's not a lot but it's a good interview.

I once heard Turner Classic Movies host Robert Osborn say something to the effect that a movie isn't old if you've never seen it. I hadn't seen A Thousand Clowns before I met my wife and it's one of the most memorable experiences I have of our early relationship. Not only was she showing me one of her favorite movies, but I got to experience a new movie I hadn't seen before that became one of my absolute favorites. From the great cast to the sharp script to the deft direction, this is a true classic in my eyes and one that only gets better every time I see it.

Kino Lorber Studio Classics delivers A Thousand Clowns to Blu-ray after a long sad history of subpar home video releases. The new video transfer sourced from a new 2K master brings a lot of life to the simple imagery of the film while the audio earns respectable marks. A more robust bonus features collection would have been great, but the Barry Gordon interview is worth watching. If you're looking for a quiet charming film with a lot of heart, check this one out. Recommended.