The Kitchen organizes its way from the pages of the comic book of the same name where three married women take on their imprisoned mob-husband's duties, only to find more betrayal and violence along the way in 1970's Hell's Kitchen. It's just too bad that the over-elaborate storylines and ill-advised twists have this film on the list of getting whacked. With a 1080p HD transfer and a lossless DTS-HD 5.1 audio track, along with a couple of bonus features, this violent little film is Worth A Look. 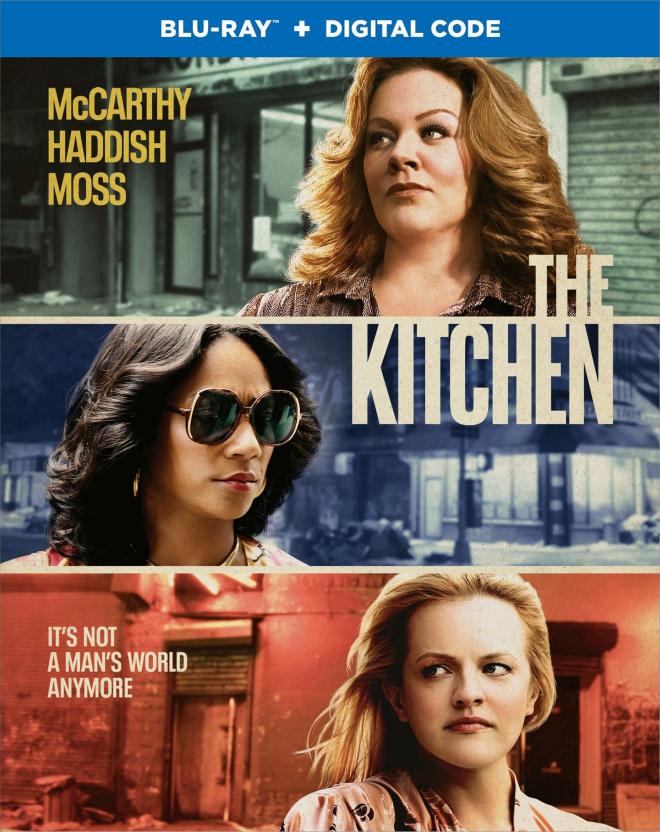 Three friendly wives of mobsters set out to replace their husbands at work through the eyes of a 1970's New York in the film The Kitchen. Based on the eight-issue comic book by DC/Vertigo a few years ago, first time director Andrea Berloff bites off more than she can chew with her impressive cast and over-populated storyline, that the film ends up sleeping with the fishes. There's a good movie in The Kitchen somewhere, but you'd be pressed to find the small tidbits that make it engaging and thrilling. Instead, it tries to be smarter than it actually is and you can tell the exact moment the film went sour, just like how Lisa Simpson knew the precise second she broke Ralph Wiggum's heart in two.

Kathy (Melissa McCarthy), Ruby (Tiffany Haddish), and Claire (Elisabeth Moss) are all married to Jimmy (Brian d'Arcy James), Kevin (James Badge Dale), and Rob (Jeremy Bobb), who are in various stages of the mafia. After a botched robbery, the three men are arrested and sentenced to prison for a number of years. If any Martin Scorsese movie taught us anything is that the wives of a pinched mafioso are usually taken care of financially in some form or fashion. Kathy, Ruby, and Claire want more for themselves and for their community and end up taking up their husband's positions and advancing their criminal careers, all while dealing with their various significant other's enemies, infidelities, and abuse. It's a wonderful setup that should've been explored to its fullest potential.

Instead, that particular instance where the film goes a different direction pops up when the three husbands are let out of prison early and entirely complicate the proceedings at hand, along with Berloff trying to throw in some off-handed twists and turns that are rushed with no real payoff. The most interesting and enthralling part of the film was watching these brilliant actresses take control of their vicious characters and demand the respect of their mob-colleagues. It was all taken away through trying to add multiple equations to an already packed film, which leads it to the instant-forgettable territory.

The excellent cast does the best they can, but aren't given much to go on with their material, but you can see that at least Haddish and McCarthy are well-versed in different genres of acting, and not just the comedic roles they are known for. Perhaps the best element of The Kitchen is the large detailed attention paid to the wardrobe and set design of the 1970's New York. It looked phenomenal and realistic, capturing every component of this turbulent time in the big city from street life to politics. I just wish that the amount of passion was transferred to its story and characters as well.

Warner Bros. delivers The Kitchen to Blu-ray + Digital. The disc is housed in a blue plastic case with a cardboard sleeve featuring the three actresses. Inside, you'll find the digital code that you can download for Movies Anywhere. 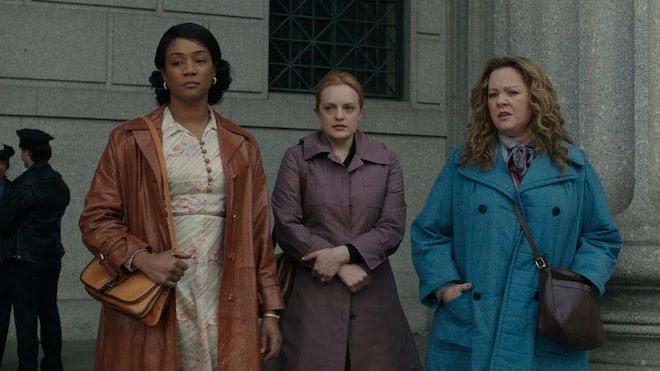 The Kitchen commits to a life of 1080p HD with an aspect ratio of 2.40:1 on Blu-ray. The film was shot digitally and looks quite good in both its detail and color palette, despite most scenes having a darker tone.

Colors are well-balanced in each scene, keeping true to the gritty fashion of the 1970's time frame. The bright clothing that the women wear all brings out the natural primary colors effortlessly, while the background of dark browns and shadowy corners contrast nicely with each tone. The pastel-colored vehicles also make for a nice addition here as pale green, blue, and yellow cars pass by on the busy streets. More often than not though, the three women are under low-light settings with stone-like colors in the background, which enhances their winter wear in colors of orange, purple, and light blue. Black levels are never murky either and the skin tones are always consistent with the light settings.

The detail reveals beautiful wide shots of an old New York, complete with graffiti, dirt, and cracked buildings on every corner. Grime and condensation on street windows also show the necessary spots and drips of liquid easily. Even the scene in the butcher shop showcases different cuts of meat, veins, and tendons perfectly. Closeups reveal makeup blemishes, individual hairs, wrinkles, visual effects, and more throughout this violent film.

Lastly, there were no major issues with video noise, although there was a small bit of aliasing in a couple of sequences that quickly corrected itself early on. 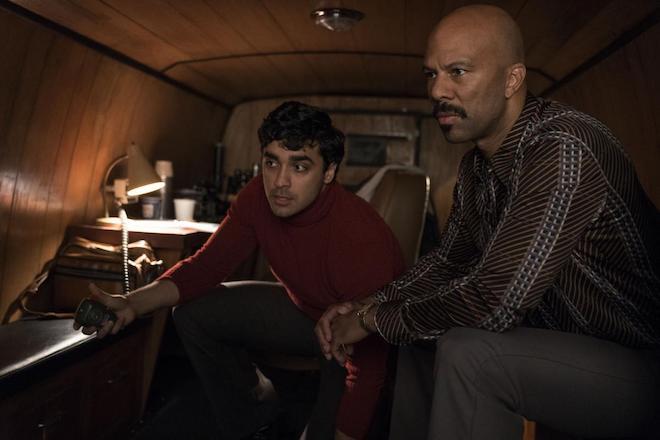 The sound revs up in a big way with its lossless DTS-HD MA 5.1 audio track that should please fans. The 5.1 setup utilizes each speaker in the heavier action elements that are on par with a big-budget action blockbuster.

The sound effects of cars passing by and gunshots all pack a good amount of bass that adds a necessary heft with each blast and engine start. Not only that, the directionality of every vehicle driving by and bullet flying past you transitions smoothly through each speaker. Other ambient noises of street chatter, music from local businesses, and other transportation in the background all sound robust from the rear speakers.

The score and music always add to the specific serious tone of the film, which is heavy in its percussion, so expect a lot of bass here. The dialogue is clean and free of any audio problems as well, leaving The Kitchen with a solid audio presentation. 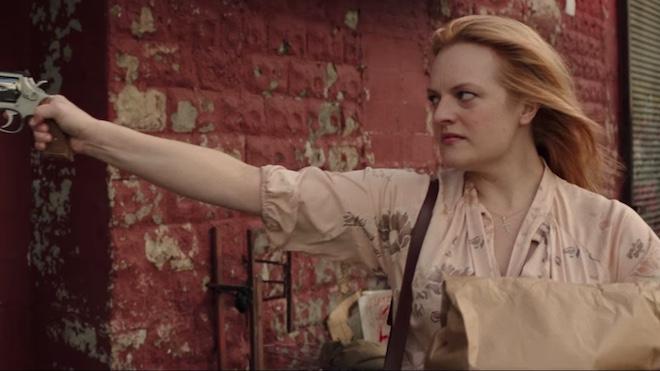 There are only about 17 minutes of bonus features here, so almost a barebones release of EPK type of extras. With such a fantastic cast and the use of great visual effects, I would imagine there would be more to say in this section, but there's not. Also, I'm surprised there is no commentary track. 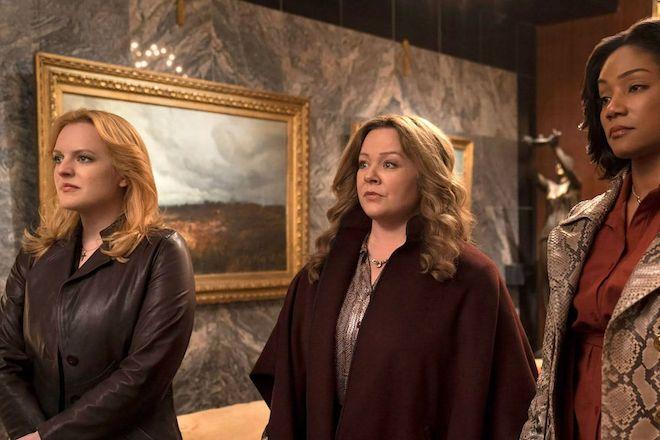 The Kitchen has a dream of a cast and an exciting story rich with detail and history to draw from. Unfortinealy, the studio miscast its director and we got a tangled mess of a story where after a certain point, the characters didn't mean much to anyone. That being said, the 1080p HD video and DTS-HD 5.1 audio mix are worth your while, if not for the sole fact of the 1970's vibe. There aren't many extras, but what's here is satisfying if not too short. Worth A Look!