Light of My Life

After a plague has killed off the world’s female population one father must protect his immune daughter from the toxic world left behind in the thrilling Light of My Life. Writer/Director Casey Affleck makes his narrative film debut here with pleasing results. Performances and cinematography are stellar with Affleck showing some real visual depth beyond the touching story. Paramount Pictures delivers a Blu-ray with an excellent A/V presentation but only a Digital Copy to offer as a bonus feature. Give It A Rent 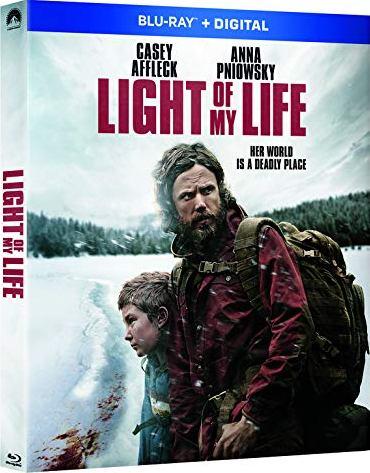 The film slowly opens on a father ad-libbing a story to his daughter in a cozy dark tent. He goes on embellishing the tale straight into a connection to Noah’s Ark. We learn after the sustained story that his daughter is possibly the last woman alive on Earth. A searing paranoia is evident when a “doddering old man” starts poking around their campsite. Mostly set in the damp backwoods there really isn’t any sign of plague or apocalyptic disaster until the two travelers head into “town” for supplies. Dressed in a plainclothes uniform with her “town hat” covering most of her face Rag is referred to as “my son Alex” and keeps quiet and out of view.

Rag asks the big questions as the two bunk down for the night in an abandoned farmhouse. She shows an educated and mature curiosity for being 11 years old. My kids are much younger but I hope they’re able to handle such weighty themes if the situation presented itself. Dad explains a balance that needs to be returned in order for things to be as they once were. “Sad, lonely, and angry men” all without “love in their hearts” make up the root cause for their cautious approach in the collapsed society. Unfortunately, a few of those men will stop at nothing to find Rag and her father.

Written and directed by Casey Affleck Light of My Life is ultimately a heartbreaking tale of parenting in a toxic and crumbling world. We’re given glimpses of life before the plague via flashbacks but the film chooses to leave concrete details aside. In place of grand scenes showing the dystopian nightmare of a post-plague world, we get painterly shots of the forest with farms nestled in the treelines. This measured approach is calming but subconsciously creates tension under the surface.

Unlike some post-apocalyptic movies with complete desolation and utterly bleak settings, Light of My Life has this unique look in which the color and light are faintly present as if draining away from the Earth. You could describe it as haunting or eerie but to me, it seems visually malnourished.

Where Light of My Life succeeds is in focusing on the emotional stakes of the characters rather than emphasizing the destructive plague. The doubts, paranoia, and struggles of raising a child anchor the film solidly with universal truths about the pitfalls of parenting. A key scene shows Dad digging through parenting books at the abandoned school they call the  “library”. It’s a sweet moment that pays off when he awkwardly explains the birds-and-bees to Rag.  Affleck and newcomer Anna Pniowsky have wonderful chemistry which elevates the slow meandering scenes that populate the film. Performances are strong and naturalistic which not only adds weight to an otherwise lean film but allows the audience genuine opportunities to connect with the characters. Elizabeth Moss plays Rag’s mother in flashback scenes that are utterly devastating.

Slow deliberate camera work, sustained landscape shots, and allowing the actors to breathe life into scenes made this one worth watching for me. I didn’t know what to expect seeing as High Life and The Road bookend the spectrum of this parenting after the apocalypse subgenre. Here everything is stripped away leaving a brilliant story about a father and daughter surviving after the loss of a mother and the trauma of a collapsed civilization.

Light of My Life arrives on Region A Blu-ray thanks to Paramount Pictures. Housed in a standard keepcase the BD50 disc is paired with a Digital Copy insert. The film loads directly to a static Main Menu screen with typical navigation options. 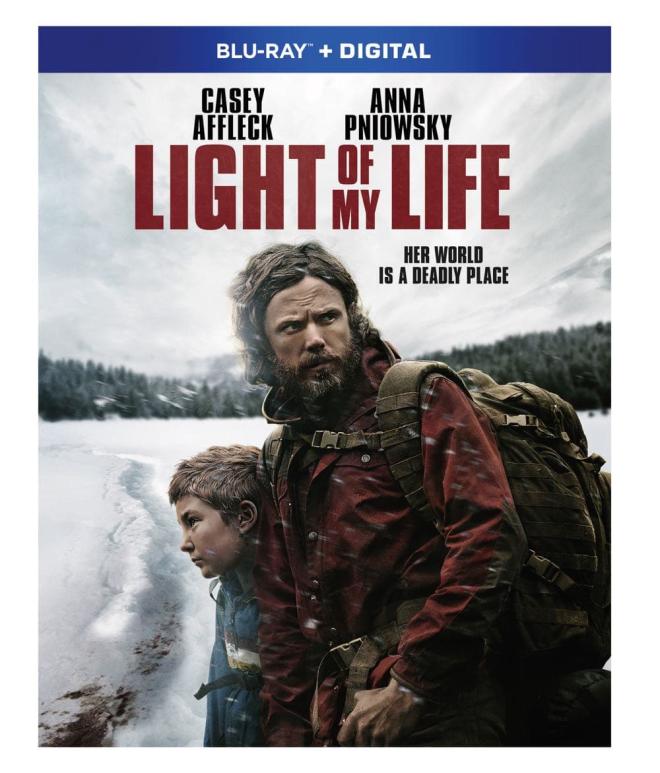 Light of My Life arrives on Blu-ray with a 1080p AVC encoded transfer in 1.66:1. Primaries are subtle but pronounced like the red of dad’s jacket or the blue jeans Rag wears to town. Fine detail is evident on costuming and facial features keeping us focused on the characters in an otherwise blurry world. A great deal of play with color tone here which adds life to an otherwise minimalist visual palette.

Often the color intensity works in concert with the emotional ebb and flow our characters experience during their journey. Forest colors are drab and lifeless one moment then lush and green the next. Interiors lack depth but still offer plenty of detail. Black levels are solid with loads of information in the frame even during the darkest sequences and in shadow. Lower contrast levels, a desaturated color palette, and restrained primaries don’t sink the film into a drab pit of despair. This stylized approach just provides opportunities for the audience to see the light through the darkness. 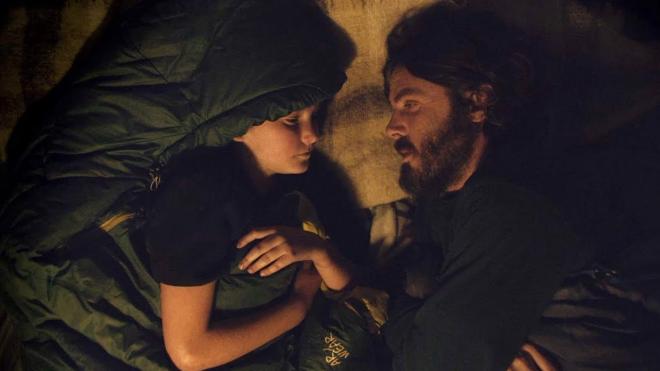 Light of My Life gets a single lossless DTS-HD MA 5.1 track. Full and confident but frequently reserved, the mix handles everything without breaking a sweat. The swelling orchestral score rises and falls through the surround channels creating effective atmospherics. Dialogue is clear and clean with the center/front channels doing the heavy lifting for this sparse film. I’d keep the volume at a medium level to catch everything in the texture save for a few loud moments towards the end when the dynamic range is stretched a bit. 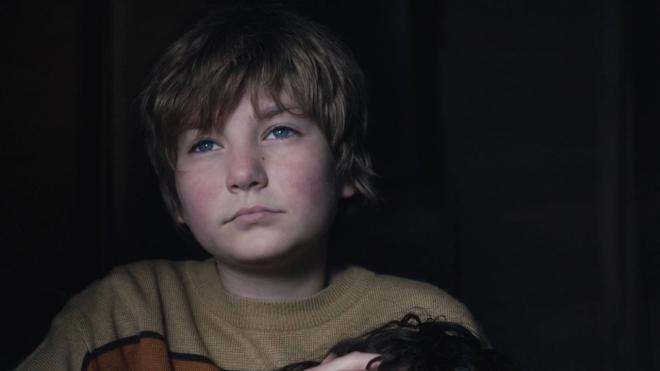 I'm not surprised there aren't any bonus features. Given the film's minimalist approach and with Casey Affleck's popularity quite low these days focusing more on the art rather than the artist is a wise choice. 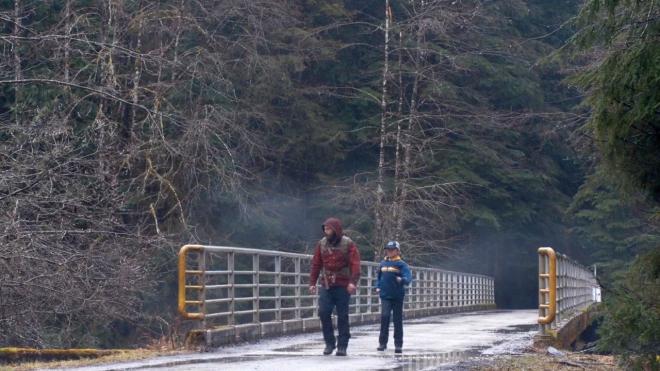 What struck me most about Light of My Life was how a small and intimate film easily handled such hefty themes as survival, plague, and gender identity without losing its footing. I felt deeply touched by a number of moments in this film without feeling as if I were being manipulated by it. Viewers will be rewarded for committing to the end, but that could be a challenge for some.

Paramount Pictures delivers Light of My Life to Blu-ray in good order with a solid A/V presentation. The lack of special features seems appropriate for such a minimalist film but I would have liked to see an EPK featurette. This film takes some patience so I’d say just Give It A Rent.

Sale Price 6.96
Buy Now
3rd Party 1.99
In Stock.
See what people are saying about this story or others
See Comments in Forum
Previous Next
Pre-Orders
Tomorrow's latest releases