When a scientist's pet project escapes, a small bombed-out town is at the mercy of the evil, wormy, toothy Parasite! Charles Band brings all his monster movie sci-fi tricks to the screen and then some with this three-dimension creature feature. the movie itself may not be the greatest thing to reach screens, but it's a hell of a lot of fun now that you can see it at home fully restored by 3-D Film Archive! Kino Lorber Studio Classics delivers a terrific 3D-Blu-ray experience with a great video presentation, solid audio tracks, and a bunch of informative bonus features. If you love schlocky sci-fi horror and immersive 3-D - you get both with Parasite. Highly Recommended.

It is 1992. After a nuclear war, the world's economy has spiraled into deep inflation and society thrives only in small lawless pockets. Lowly research scientist Dr. Paul Dean (Robert Glaudini) has escaped from Los Angeles with a parasitic specimen, one currently ravaging his body - the other encased in a silver tube. Desperate to find a cure, he travels into the desert to find a place he can peacefully complete his work. Unfortunately, a gang of hoods set the beast loose! With time running out before the parasite reproduces, Paul must depend on lemon farmer Patricia (Demi Moore) to help him find a cure that kills both parasites - without killing himself as well! 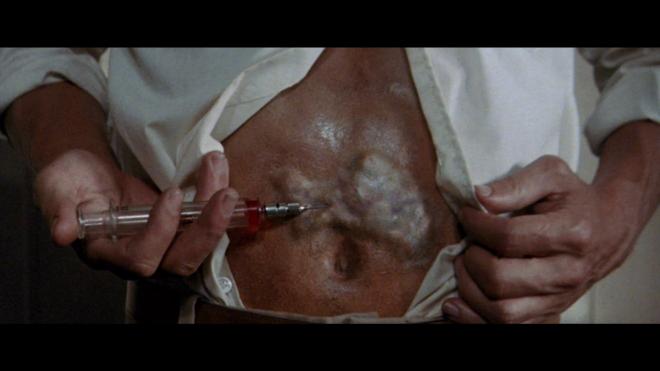 I love Charles Band movies. There's this rough around the edges, no budget go for broke quality to them that is just damn endearing. Take a high-concept sci-fi horror idea and then just make it on whatever budget you have available. With a great crew and an impressive talent in front and behind the camera, you're guaranteed a good time. The movie may not be the best thing ever made, but it's a hell of a lot of fun. The fact that Band went for 3-D at a time in the 80s before the resurgence is even more endearing when they had no idea how the camera rig even worked. They just shot the movie. Thankfully the production designer and the camera operator knew a thing or two about how to make the 3-D effect work.

In 2-D Parasite really isn't much of a movie. You can feel how so many sequences and shots were designed for the 3-D format that without it they seem strange and lifeless. There are so many protrusion shots that when viewed flat they just look odd… but in 3-D, they're exciting and amp up the energy of the movie.

Taken as a whole the film itself may not be the greatest thing ever made. It's on par with a number of other Band pictures like Laserblast - but even in their hokum, they're still wildly entertaining. Here we have a fleshy worm of a monster crafted by the late great legend Stan Winston. While the titular monster wouldn't stand up to his later greater efforts, it features solid creature effects work and the texturing of the creature lends itself well to 3-D. It'd been a long time since I saw this movie, probably not since I was a little kid. Seeing it again was a great nostalgia trip but at the same time watching it as it was meant to be seen in full stereoscopic 3-D was a real trip! Parasite is proof positive that a movie doesn't have to be the greatest movie ever made to offer terrific entertainment value!

Parasite invades 3D Blu-ray in a single disc release from Kino Lorber Studio Classics. Pressed onto a Region A BD-50 disc, the disc is housed in a standard sturdy Blu-ray case with reversible cover artwork. The disc loads to a static image main menu with traditional navigation options. Both the 2D and 3D presentations are on the same disc, if you're 3D ready, the 3D version loads up automatically, but if you'd like to see the film flat, you can switch to that option in the main menu. 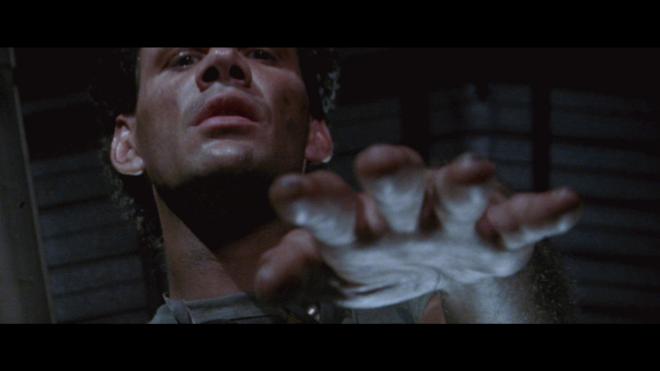 3-D Film Archive pulls another masterful restoration out of their bag of tricks for Parasite 3-D. Presented in its original 2.35:1 aspect ratio, the film was shot in 1982 using a single strip 35mm camera system that splits both the right and left eye into a single Over/Under frame. This presented a number of syncing issues, as the negative aged and created undesirable shadowing effects in the image. That's all be taken care of - and this gooey monster movie looks great! Film grain is even and organic and details are sharp for this type of 3-D image. Another unfortunate side effect of this single-frame Over/Under 3-D is that detail suffers and grain can become stronger. The image is never overly noisy but softness issues are notable. Any wide shot in the film maintains a great 3-D presence along the z-axis but details are softer than a middle or close-up shot.

For 80s 3-D - man, I wish 3-D Film Archive could give Friday the 13th: Part 3-D a once over. Comparatively, this is a much more stable and fulfilling three-dimensional experience than what Metalstorm, Jaws 3-D, or Comin At Ya received. For a low budget movie that was shooting quick - the team behind the camera knew how to stage shots, place props, and make sure the film is a truly three-dimensional experience. There are tons of amazing protrusion shots, a pole stuck through a man's stomach as blood leaks out the end right in your face is an amazing effect. This isn't to say anything about the wormy titular creature that is captured with some great pop-out moments and true depth to the image. 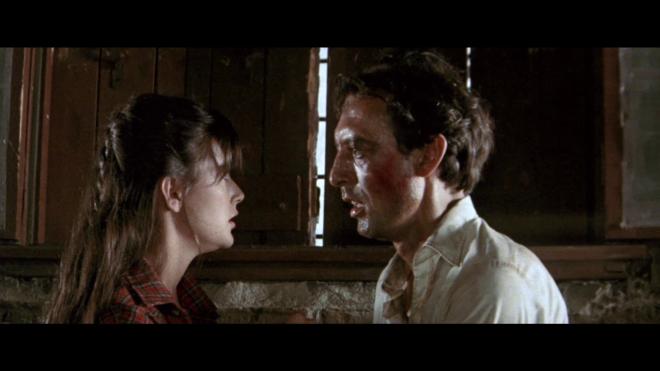 Parasite infects this Blu-ray with two solid audio mixes. Depending on how you're setup at home you get to roll with a more traditional DTS-HD MA 2.0 track or a nicely immersive DTS-HD MA 5.1. Both are great and fit the movie nicely but I'm actually going to tip my hat towards the 5.1 mix. Usually with films of this vintage I tend to prefer the original tracks because they sound more organic to the movie. This time, the 5.1 spaces things out and really pumps up the atmosphere giving sounds, dialogue, and the film's creepy score room to breathe. That isn't to say there's anything wrong with the 2.0 mix, it's solid stuff on its own as well and does a great job managing the various sound elements. You really can't go wrong with either of them. Levels are spot on. Dialogue is clear. No adverse hiss or pops present. 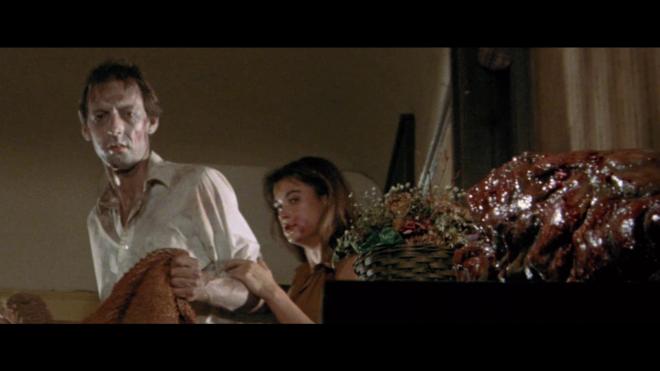 This Parasite is given a terrific assortment of informative bonus features to munch on. The Commentary Track with writer Alan J. Adler is a nice piece, but the short interview bits offer an interesting look at what went into the making of the movie, the 3-D process, and the making of the creature. The restoration short is really interesting as it showcases 3-D Film Archives masterful restoration work with nearly unwatchable before samples against the finished restored versions. 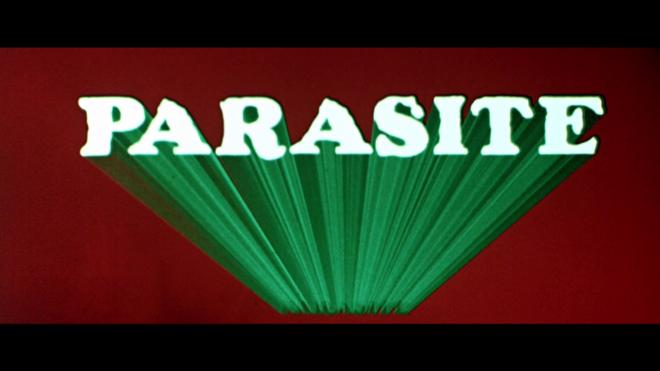 No, Parasite is not the greatest movie ever made. But damn is it a lot of fun. Even flat in 2-D the movie offers plenty of entertainment value, but it doesn't truly come alive until those 3-D glasses cover your eyes! 3-D Film Archive delivers another incredible restoration effort with native stereoscopic imagery that gives you an incredible window into another world with plenty of pop-out effects that are a real gas!

Kino Lorber Studio Classics holds up their end of this parasitic bargain providing Charles Band fans and 3-D enthusiasts a terrific 3-D Blu-ray with a fantastic image transfer that provides immersive depth, two solid audio mixes, as well as a bunch of worthwhile bonus features to pick through. If you love monster movies and have a hankering for impressive three-dimensional imagery it doesn't get much better than this - Parasite on 3D Blu-ray is Highly Recommended.

Sale Price 15.99
List Price 29.95
Buy Now
3rd Party 14.98
In Stock.
See what people are saying about this story or others
See Comments in Forum
Previous Next
Pre-Orders
Tomorrow's latest releases