Battle of the Bulge

Overview - In the winter of 1944, the Allied Armies stand ready to invade Germany at the coming of a New Year. To prevent this occurrence, Hitler orders an all out offensive to re-take French territory and capture the major port city of Antwerp. "The Battle of the Bulge" shows this conflict from the perspective of an American intelligence officer as well as from a German Panzer Commander.
OVERALL
For Fans Only 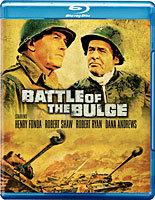 In the early winter of 1944, the Allied Forces stood ready to invade Germany at the coming of the New Year. Warned of the impending invasion, Hitler ordered an all-out counteroffensive to thwart the plan using a covert Panzer division, unbeknownst to the Americans. On December 16, 1944, German tanks broke through an Allied front in the Belgian Ardennes, commencing a battle that would last for nearly 30 days. In what eventually became one of the bloodiest conflicts experienced by the American forces, the battle also became one of the key conflicts leading up to the final months of WWII and would later be referred to as "The Battle of the Bulge."

Not the first (nor the last) Hollywood epic to use the famous incident as the basis for a fictionalized action-adventure film, 1965's 'The Battle of the Bulge' may unfortunately be the weakest. Inferior to such efforts as Richard Attenborough's classic 'A Bridge too Far,' 1992's 'A Midnight Clear,' and especially the HBO mini-series 'Band of Brothers,' 'Battle of the Bulge' is an incessantly talky, inert picture. Though the film's intentions are good -- illustrating both sides of the incident and analyzing how the Americans and the Nazis were pulled into the pivotal conflict -- it makes for lousy drama.

Available for years only in horribly pan-and-scanned, edited versions, Warner finally restored 'The Battle of the Bulge' in 2005 for its DVD release. They not only reconstructed the original 167-minute version of the film, but also restored its glorious Cinerama compositions. Ultimately, it doesn't improve the picture much, however fantastic the restoration. Certainly, everything about 'Bulge' is B-I-G. It's got humongous widescreen vistas, an endless runtime, epic battle scenes, and a cast of thousands, including Henry Fonda, Robert Shaw, Telly Savalas, Charles Bronson and James MacArthur. Still, it's amazingly impersonal. 'The Battle of the Bulge' plays more like a historically-dubious primer on war strategy, not entertainment.

The problems are many, and there is a surprising lack of urgency in the film. At least half of the film is so weighed down by military jargon that it's virtually incomprehensible. Characters plot endlessly about attacks and counteroffensives, but their consequences are never shown in human terms. We know intellectually what's at stake: the fate of the free world, of course. Yet, the film doesn't even try to grab us emotionally. Even Fonda and Shaw (complete with a blonde 'do as Col. Hessler, the German commander in charge of the Panzer attack) can't elevate their characters with any discernible goals or personalities. 'Bulge' ultimately has as much thematic depth as an episode of 'Hogan's Heroes,' only it's not as funny.

The film's much-touted battle scenes and special effects are also cripplingly dated. Sure, all the rear-projection sequences have a cheesy charm to them. But even giving the filmmakers the benefit of thedoubt does little to eliminate some shoddy inconsistencies. Why are there shots of deserts in a scene that's supposed to take place in Belgium during the winter!? Even the staging lacks cohesion and direction. I don't need CGI or modern effects to get excited, but think back to such classic action sequences like those seen in 'The Bridge on the River Kwai' or 'Bullitt,' and 'The Battle of the Bulge' pales in comparison.

It's worth noting that 'Battle of the Bulge' came under considerable fire at the time of its release -- not the least from Dwight D. Eisenhower himself -- over historical inaccuracies. And while the filmmakers never made any bones about the fact that their movie was quite fictionalized, that means 'Battle of the Bulge' fails on both counts: it is neither a reliable history lesson, nor a very thrilling action movie. Unless you are an absolute war movie junkie, I recommend skipping this one picking up the more entertaining 'The Dirty Dozen' on Blu-ray instead. 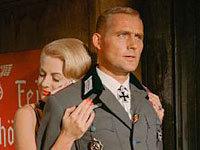 Warner has done it again. I continue to be greatly impressed with their catalog remasters, and 'Battle of the Bulge' is another one of those titles that just looks far better than any film from 1965 has a right to.

The studio offers up another pair of identical 1080p/VC-1 encodes for the Blu-ray and HD DVD releases, both presented in the film's ultra-wide 2.76:1 aspect ratio. The source is in pristine shape, with blacks surprisingly consistent and contrast excellent. I expected a lot of heavy grain and considerable inconsistency, but the image holds firm throughout. Colors are excellent as well. Right from the opening monochromatic title sequence, the cleanliness and vibrancy of primary hues is pretty amazing -- reds especially have such pop that they rival a new film. Fleshtones, too, look natural and accurate.

Of course, there are a few age-related deficiencies. The print can waver a bit, but it's only really noticeable on large patches of color, and even then, the issues are minor. The image, while sharp, sometimes looks a bit too processed, but that's partly due to the film's dated rear-screen photography. If anything, this transfer is too good. Matte lines are now painfully obvious, and there is a bit more grain during any shot featuring optical composites. But nevermind that, 'Battle of the Bulge' looks excellent.

Typical of a vintage title with dated source elements, there is only so much modern technology can do to upgrade for surround sound. Warner again makes a valiant effort to give 'Battle of the Bulge' a Dolby Digital 5.1 (640kbps) remix, but the results are pretty much the equivalent of a cleaned-up stereo presentation.

The bottom line is still somewhat impressive. The film is really rather quiet and talky, but dialogue sounds very clean and clear for a 40-odd-year-old film. The arid, hollow sound effects (lots of droning mechanics, wind noise, etc.) give the mix a very stark quality, but the surrounds fail to provide any real ambiance. The mix is largely directed to the fronts with only some minor bleed. Even the score by Benjamin Frankel, which I find fairly generic, is downplayed in the mix to the point where the dialogue usually sounds louder. Still, the elements are free from hiss and other obvious age defects and the remaster sounds very crisp. 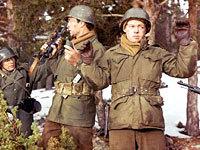 Given that most of the filmmakers behind 'Battle of the Bulge' have long since passed, it shouldn't surprise that the extras Warner was able to assemble for the film are somewhat slim.

Warner first released the film on standard-def DVD in May 2005 and only included a couple of vintage featurettes. Both are included here: "The Filming of 'Battle of the Bulge'" (10 minutes) and "History Recreated" (9 minutes). The quality is scratchy B&W and 4:3 full screen, but each is often fascinating to watch. The film's technical advisor, General Meinrad von Lauchbert (the commander of a German Panzer division during the original battle), is actually the star of the first featurette, while the second is just another series of on-set interviews with cast and crew, including director Ken Annakin, co-producer/co-writer Milton Sperling, and Henry Fonda and Robert Shaw. The best bit -- if a bit unsettling -- is watching Lauchbert teach Shaw the proper way to do the infamous Nazi Sieg, Heil! salute.

The only other extra is the film's original Theatrical Trailer, also presented in dated-looking, 480i video.

'Battle of the Bulge' has all the hallmarks of a dated, '60s-era war movie -- slow pacing, obvious special effects, somewhat hammy acting, and a story that's historically suspect. Unfortunately, even setting aside these age-specific impediments, the film still doesn't work. The characters are not involving, the runtime is too long, and much of the movie just doesn't make a lot of sense. But kudos are nonetheless due to Warner, as they have again delivered a top-notch remaster, with an especially fantastic transfer. There is also a new audio commentary, plus a couple of enjoyable vintage featurettes. So while most will probably find 'Battle of the Bulge' a tough slog, fans should definitely pick this one up without hesitation.

Sale Price 5.11
List Price 14.98
Buy Now
3rd Party 10.94
In Stock.
See what people are saying about this story or others
See Comments in Forum
Previous Next
Pre-Orders
Tomorrow's latest releases