Overview - Secret Agent Ethan Hunt is sent to Sydney, to find and destroy a genetically modified disease called "Chimera"
OVERALL
Worth a Look 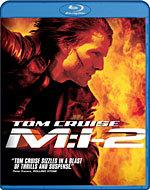 The first rule of action movie sequels seems to be that everything in the newer film must be bigger than the film that inspired it -- bigger stunts, bigger chase sequences, and bigger explosions. With John Woo at the helm, 'M:I-2' (a.k.a. 'Mission: Impossible 2') does exactly that. This follow-up to the Tom Cruise blockbuster is most-assuredly louder in terms of explosive action, as it crescendoes to a heavily-stylized, operatic finale. But is bigger necessarily better?

The film begins, as expected, with a pointless action scene that has nothing to do with what follows. As we meet up again with Ethan Hunt (Cruise), he's scaling the side of a cliff seemingly bigger than Mt. Everest for no apparent reason other than to provide visuals that will make the trailer look really cool. As it turns out, this movie is actually about Hunt being called back into action to take down mega-millionaire Sean Ambrose (Dougray Scott), who has hatched a plot of James Bond-proportions to destroy the world with a genetically modified disease dubbed "Chimera." Along the way, Hunt tangles with the beautiful jewelry thief, Nyah (Thandie Newton), who apparently loves diamonds as much as she likes foreplay with secret agents. Whether Hunt's blowing up bad guys left and right, or making goo-goo eyes with Nyah while their cars careen together in slow-motion towards the edge of a cliff, 'M:I-2' lives up to its tagline: "Expect the Impossible... Again!"

Though I realize I'm in the minority, I actually prefer 'M:I-2' over Cruise's original 'Mission: Impossible' flick. Granted, the mission details are a bit clunky and there a million other plot flaws, but the pacing is so effective and energetic, I found myself easily distracted from such issues. And let's face it -- the original played like a piece of cinematic Swiss cheese in the first place. Director Woo (whose success as an action film director in his native Hong Kong led to such stateside hits as 'Broken Arrow' and 'Face/Off') has long displayed an affinity for carnage over character, and 'M:I-2' is no exception.

Just as in the original film, 'M:I-2' has little to do with the much-beloved cult television series which spawned it, and Hunt's team is again largely irrelevant. Only Ving Rhames returns as the witty Luther Stickell; but he's about as integral to the action as Felix Leiter is to the plot of a Bond flick. Instead, this is Cruise in full-tilt action hero mode, complete with a longer, grungier hairdo and an arsenal of wry quips for each time he offs a bad guy. Still, as relatively inane as all this is, I enjoyed watching Cruise climb steep cliffs with one finger, and doing wheelies on a motorcycle while firing a pair of machine guns at the same time. I've also come to admire how Woo manages to insert shots of slo-mo pigeons flying about in the climax of each of his films, even when the action takes place in an underground bunker (as it does here).

Perhaps the reason I'm inclined to overlook the many flaws in 'M:I-2' is that it never tries to be more than it is. In other words, it may be stupid, but it's not pretentious -- it just wants to "WOW" the audience with the sheer level of its bombast, and as such, it continues in the tradition of the summer blockbuster. And the film's big setpieces hold up well almost eight years later, even in this era of the zillion-dollar, CGI-fueled extravaganza. To my eyes, 'M:I-2' still doesn't stack up to 'Mission: Impossible III' in terms of the overall trilogy; but it's a step up from the stodgy opener. In short, if you like dumb action flicks, or just want a cool high-def demo disc, you could do a lot worse than 'M:I-2.' 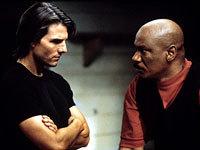 All three 'Mission: Impossible' flicks originally hit Blu-ray (and HD DVD) late last year, as part of Paramount's 'Ultimate Missions' box set. Although it included the entire trilogy in one collection, the most recent of the three installments ('Mission: Impossible 3') was also made available separately as a stand-alone release. Now, with sales of the box set finally cooling, Paramount is issuing each of the first two flicks on their own for those fans not interested in owning the whole set.

As in the box set, 'M:I-2' is presented on Blu-ray in 2.35:1 widescreen and 1080p/MPEG-2 video. My reaction to this transfer is the same as it was last time, with the first sequel looking better than 'Mission: Impossible' but not as good as 'M:i:III.' The print is in pretty good shape with no major blemishes and only slight film grain. Colors are less overbaked than the first flick, which helps detail, and fleshtones are a proper, lovely shade of orange. However, the transfer looked a bit dark to me, with some scenes suffering from too much black crush in the shadows. Sharpness remains superior to 'Mission: Impossible,' and brightly lit scenes deliver the kind of striking high-def experience you'd expect from a newer film (not one a decade old, as this is). There are no evident compression issues and I didn't find edge enhancement intrusive. All things considered, I rank the picture quality on 'M:I-2' a solid triple.

'M:I-2' gets the Dolby Digital 5.1 surround (640kbps) treatment on Blu-ray, which in typical Paramount fashion is a slight downgrade from the HD DVD version which receives 1.5 Mbps. That's a real shame (and inexcusable, if you ask me), especially since 'M:I-2' enjoys a better, more aggressive sound design than the first film. This film certainly would have benefited from a full-blown high-resolution audio presentation, such as Dolby TrueHD, DTS-MA, or uncompressed PCM.

Dynamics are very strong, with discrete effects near-constant during action sequences. Imaging is near-transparent, with wonderful seamless pans that engage the listener in an immersive 360-degree soundfield. The best scenes are the motorcycle chase and the extended climax in the underground bunker -- demo-worthy material for sure. Low bass is also rock solid, and the use of score is far more pronounced and atmospheric than on the first 'Mission.' Though pretty silly, the "car ballet" love scene benefits greatly from strong score deployment to the rears. Dialogue holds firm throughout, with clear intelligibility and no obvious issues with volume balance. 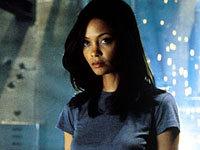 As with the video and audio, the supplements for 'M:I-2' are also identical to the box set version released last year. The package will also be familiar to those who picked up Paramount's standard-def DVD release from 2000, as all of the materials were originally culled from that set.

Director John Woo kicks things off with an audio commentary. Despite his somewhat broken English, I enjoyed listening to him as he's quite animated and enthusiastic. Though many hate 'M:I-2,' Woo really believes in his action clichés, which I find endearing. Unfortunately, the gaps of silence are frequent and by the end of the track I was starting to snooze. Still, Woo fans should enjoy this.

"Behind the Mission" runs 15 minutes and is your typical promo EPK. On-set interviews with Woo, Cruise, Thandie Newton, Dougray Scott and other cast and crew offer little insight -- it's all the usual fluff about how great the movie will turn out, etc. I honestly couldn't remember a word anyone said five seconds after it was over. "Mission Incredible" is a five-minute featurette on the film's stunts which serves as an introduction to "Impossible Shots," a series of eleven vignettes breaking down a key scene in the film. Stunt coordinator Brian Smrz takes the lead in the sequences, along with Woo.

Deleted material is slim, with only a single Alternate Title Sequence included. Unfortunately, nothing in it is really that much different from the finished version to warrant more than a single watch.

Promotional items include a music video for Metallica's "I Disappear."

Rounding out the extras are two montages also replicated on the 'Mission: Impossible' and 'M:i:III' releases. Both are total fluff dedicated to Tom Cruise -- The "2005 Stanley Kubrick Britannia Award for Excellence in Film" runs four minutes and features scenes from Cruise's best-known movies, while "Generation: Cruise" is another few minutes of icon worship.

Yes it's silly and over-the-top, but I got a kick out of 'M:I-2' as pure popcorn entertainment. This stand-alone Blu-ray release of the film is identical to the version first included in last fall's box set release -- same nice video, audio and supplements. If you have no interest in either of the other 'Mission: Impossible' flicks, this stand-alone edition of 'M:I-2' is an easy recommend.