The definition of a literal cash grab - The Hills Have Eyes: Part 2 is a strange discoloration on the legacy of Wes Craven's horrorific career. Made at a career low-point, the film has a fun energy but lacks purpose and yeah, those near-constant flashbacks to the first film become tiresome and more than a little silly. If this was Wes' last film it would have been a blight, but the man rebounded nicely. Arrow Video gives this unnecessary sequel the true Limited Edition treatment with a solid 2K video restoration, clean audio mix, and a solid making of doc with essays and archival press materials. No, it's not a great movie, not even a worthy sequel - it's just damn entertaining. Call this one Highly Recommended - For the Fans.

Just when you thought it was safe to make a low-budget sequel to an already low-budget horror film! Bobby (Robert Houston) has struggled to put his life back together after the terrifying encounter of Jupiter's family in the desert. Along with Jupiter's escaped daughter Ruby (Janus Blythe) who now calls herself Rachel - they run a motorbike shop and are sponsoring a team of riders destined for glory. Only they have to go through the desert to get to the race. When Bobby bails on the team, it's up to "Rachel" to get the blind Cass (Tamara Stafford), her rider boyfriend Roy (Kevin Spirtas), the rest of the team and faithful pup Beast to the race. When they take an ill-advised shortcut, they run head-on into Pluto (Michael Berryman) and The Reaper (John Bloom) and the carnage begins... again! 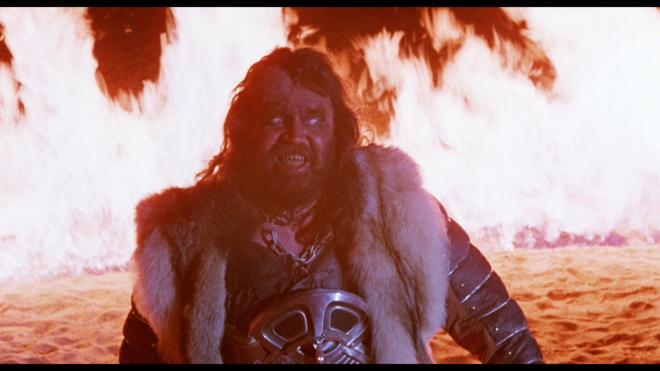 Take a look at our review for the previous 2012 Release

Made at a time when Wes Craven just suffered a huge smack to his career with Swamp Thing flopping, as well as some personal financial issues - the man just needed a quick paycheck. Without much of a script, Craven cranked out The Hills Have Eyes: Part 2 on a nickel and dime budget to keep the lights on for his dimming career. To say this isn't much of a highlight for the man's career reel is a bit of an understatement! It's a goofy flick without purpose for existing. The effort to get stupid people to repeat the same stupid mistakes is a rough plot pill to swallow - especially when someone like Ruby is in the party who could have said at any time "Yeah, no let's not go down that road."

The rest of the plot is pretty straightforward Scooby-Doo material. Bunch of friends in a bus makes the wrong turn that leads them to peril while the dog saves the day! It's this cheese factor that actually makes The Hills Have Eyes: Part 2 a fun watch. Parts of it works really well - the blind girl having to climb up a rope to get away from The Reaper is a skillfully executed sequence, even if goofy. Pluto stealing one of the bikes and leading the knuckle-headed riders into a series of traps is a fun sequence that ends with a particularly gnarly death. But for every sequence that works, there are three other parts that don't. Not helping matters is the constant extended flashbacks to pad the film to a full 90-minute runtime. One or two brief flashbacks for a sequel is fine - it worked well for Friday the 13th: Part 2 so the audience who didn't see the first film could get caught up. But when you have a German Shepherd having a flashback… the gag has run its course. Now it's just silly. Which may have been the point all along?  I once had a great conversation with a friend about this movie where he made the argument that Wes knew going in he couldn't possibly make a great sequel so with his dark bent of humor set out to make the worst sequel he possibly could.

Watching this film again I could see how that motive would work. There's not a lot of genuinely thrilling or scary material here. If anything, the whole thing plays as a comedy with a lot of horror elements tossed into it. If this was the case and Wes was just having a laugh while he waited to get A Nightmare on Elm Street off the ground - it's a pretty good gag. It's even funnier when you think about how truly god awful the sequel to the remake, The Hills Have Eyes 2 was - and that Wes and his son co-wrote it together. They somehow managed to help make an even worse sequel with a much larger budget and talent pool!

The Hills Have Eyes: Part 2 makes its second appearance on Blu-ray - this time courtesy of Arrow Video in a Limited Edition single-disc release. Pressed on a BD-50 disc, the disc is housed inside a standard clear case with a load of reproduction lobby cards and mini-posters as well as reversible artwork. The whole package is nestled inside a hard stock book sleeve with a booklet containing essays by Amanda Reyes with Johnny Legend's On The Set article from Fangoria. Also included is a reversible mini poster with both the original poster art and the newly commissioned artwork for the release. 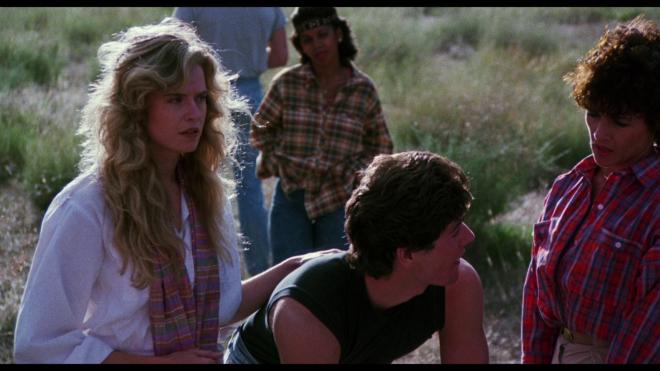 Sourced from a new 2K transfer, for better or worse, The Hills Have Eyes: Part 2 has never looked this good. Considering the string-thin budget and metered release, I doubt it even looked this good theatrically. My only frame of reference is my scattered memories of VHS rentals and the pretty damn terrible original Blu-ray release from Kino Studio Classics in 2012. Now, this isn't a particularly beautiful looking film. Much like the original The Hills Have Eyes and The Last House on the Left, this movie wears its production budget on its sleeve, but in a good way!

Details and resolution are better than ever. I wasn't used to seeing that much facial and costuming details. The Joshua Tree landscape often looks stunning with some beautiful scenic vistas. To that end, film grain is particularly thick and abundant. It still maintains a very organic appearance, but it is a bit on the noisier side of the spectrum in keeping with Wes Craven's earlier less polished efforts.

Colors are bright and bold with terrific primaries. The red on the motorbike riders' suits and helmets really pop! Of course, the crimson bits with bloodletting and gore maintain their presence nicely. Blues and yellows also get their tones in - especially in night sequences or deep in The Reaper's mine hideout. Black levels are also nice and inky without any crush issues giving the image some terrific three-dimensional pop. Contrast is on point, but at times I felt like some of the daylight sequences could be a bit on the bright side letting whites get awful close to blooming. Speckling isn't an issue as it appears a terrific effort was made to clean things up. The only standout anomaly briefly arrives at the climax where the lower right corner of the film looks like it got some light exposure before being processed. It's only a brief flicker of purple/red but it's there. Some brief vertical scratches also remain but again they're nothing to get worked up over.  Otherwise, this is a great looking release. 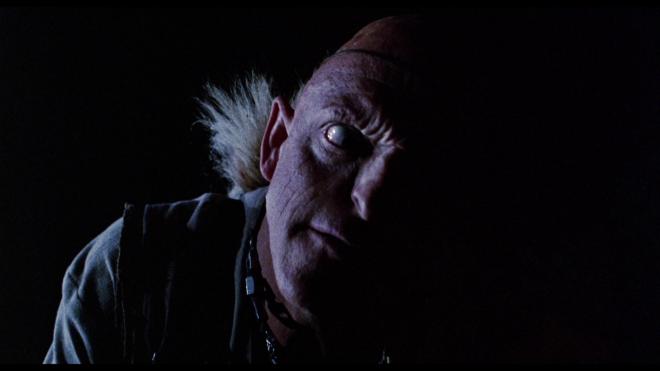 The Hills Have Eyes: Part 2 enjoys a nice robust LPCM 1.0 mono mix that more than adequately handles the load for this little thriller. Given the limitations, the mix actually performs nicely and has a nice and open feel to the mix. The chase sequences on the motorbikes over the rocks are a highlight of the mix with plenty of frontend presence with some guttural LFE and a nice echo quality as the bikes tear around Joshua Tree. The big explosive finale is another action-packed highlight. The rest of the mix hits the basic notes with dialogue coming through clean and clear while primary sound effects maintain a lively presence. There are a few moments around the flashback sequences where the mix felt a bit flat with an overly dubbed quality, but those are fleeting moments. Levels are spot on and there isn't any notable hiss or excessive pops. 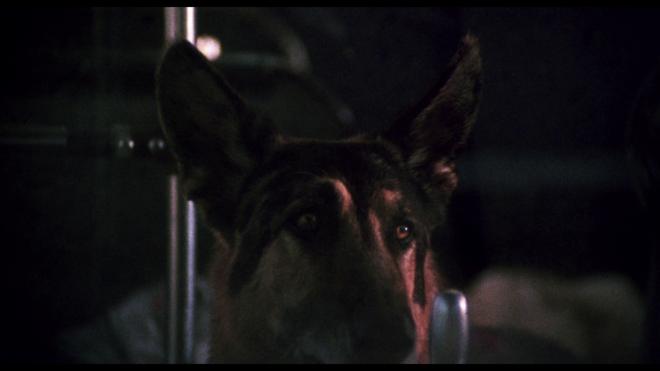 While the bonus features package isn't the biggest or best packed together for an Arrow release, I'll give them kudos for what they brought to the table. The thirty-minutes or so we get with the mini-doc Blood, Sand and Fire: The Making of The Hills Have Eyes: Part 2 is really great material with production team, actors, and producer Peter Locke all contributing great stories about the show. The audio commentary with The Hysteria Continues is great stuff as well. After that, it's pretty familiar filler with trailers and still galleries to round out the show. 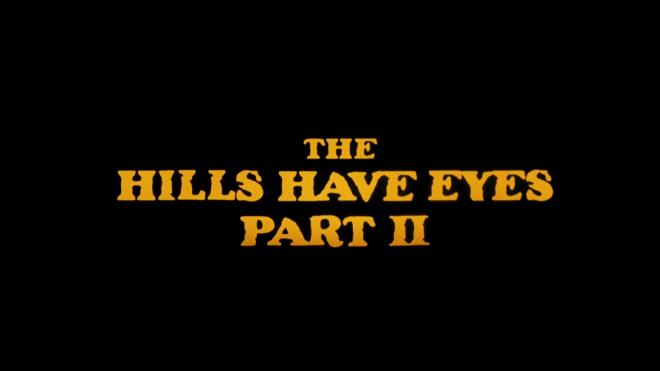 No, sadly, The Hills Have Eyes: Part 2 is not a good movie - nor is it a particularly worthwhile sequel. The story behind the making of the film is probably much more interesting and in some ways scarier than the actual film itself. Wes was clearly under the gun, strapped for cash, and needed a paycheck - but it also kept him in the business long enough to get A Nightmare on Elm Street off the ground. So with that nugget of historical context, the film does have some value beyond being a silly nonsensical sequel complete with a story flashback by a pupper.

Arrow Video does The Hills Have Eyes: Part 2 such a service with this excellent Limited Edition that it forces you to stop and reevaluate if the film is really actually that bad. It is - but it's never looked or sounded better. I'm used to some pretty terrible presentations so this was actually damn stunning at times. The new 2K video restoration practically sparkles with terrific details and robust colors while the audio no longer sounds like it was run through mud! Toss in some worthwhile bonus features and the attractive packaging and you have yourself a Limited Edition set that's actually highly recommended - For the Fans. If you don't love this movie, this set isn't going to turn around your opinion.

Sale Price 74.97
Buy Now
3rd Party 74.95
In Stock.
See what people are saying about this story or others
See Comments in Forum
Previous Next
Pre-Orders
Tomorrow's latest releases