For the first time, the full and complete five-film Omen Collection is available on Blu-ray in a Deluxe Edition release from Scream Factory. While the series offered up diminishing returns from sequel to sequel until the unfortunate remake. Even as bad as the later entries got - the entertainment value is prime red meat horror. The Omen gets a fresh new 4K restoration transfer that is glorious while the sequels recycle the same A/V transfers from the previous set. Omen IV: The Awakening may be a trashy sequel but it makes a solid Blu-ray release if you've been itching for all of the films together in a single set. To cap it off, Scream Factory pulled out al the stops with a metric ton of impressive new and archival bonus features. If you're a fan of The Omen flicks - this is one hell of a set offering a notable upgrade over the previous set from 2008.

"When the Jews return to Zion / And a comet rips the sky / And the Holy Roman Empire rises, / Then You and I must die. / From the eternal sea he rises, / Creating armies on either shore, / Turning man against his brother / 'Til man exists no more."

The Omen is one of my favorite horror films. It's moody, creepy, and features the stalwart gentleman actor Gregory Peck grappling with the knowledge that his son is in fact the antichrist. It's a hell of a premise coupled with a series of grisly murders and creepy events the movie was a classy production built on mood and atmosphere. Sadly the sequels weren't managed with the same care. 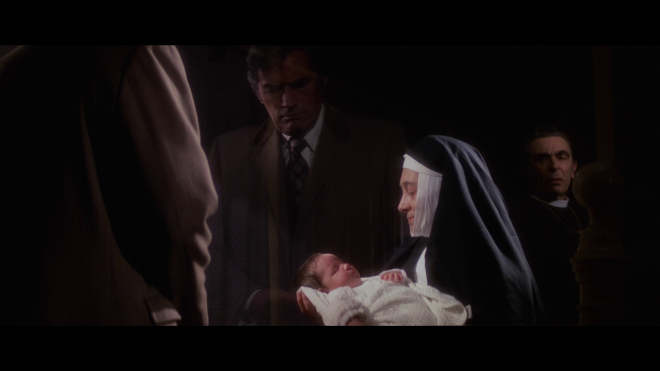 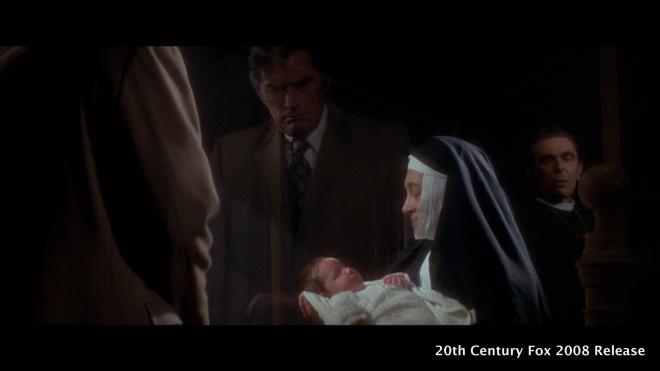 Damien: Omen II did what every other sequel tries to do by squeezing more of the same while trying to expand on the narrative. Some inventive kills keep the energy moving but it can't stand out from the shadow of the first film. The Final Conflict puts adult Damion front and center of the action with the film in the daring position of trying to make the son of the devil an empathetic character. You hate him, obviously, but Sam Neil delivers a fierce performance to make the film the more interesting sequel. Omen IV: The Awakening - well, if you have to have a made for TV sequel to a classic franchise, I guess you could do worse, but that would be The Birds II and that is a camp classic. This one tries hard to go for the horror guts of the original franchise, but the movie is just flat out bonkers and cheap looking to boot. When sequels falter it's time for a reboot with The Omen 666. The only smart thing about this dull lifeless on-the-nose sequel was its theatrical release date of June 6 2006. I was there that Tuesday morning. I remember it well… and still to this day hate this soulless remake in spite of a great performance from Liev Schreiber. 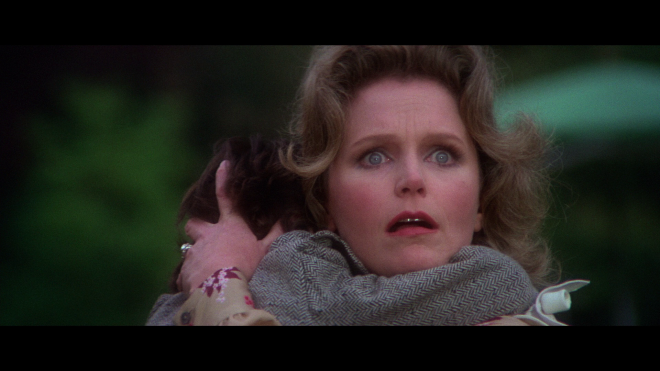 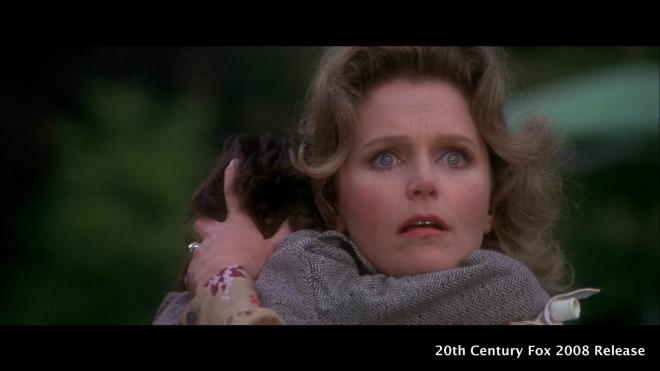 Read our full review of The Omen Collection 2008

Scream Factory turns to the book of revelations to smote fans with one hell of a juicy The Omen Collection Deluxe Edition featuring all five films bundled together for the first time on Blu-ray. Each film gets its own Region-A locked that rests nicely in its own standard Blu-ray case and housed in a hard stock slipcover similar to Scream Factory's efforts for the Halloween or Critters collections. Each disc opens to a static image main menu with traditional navigation options. 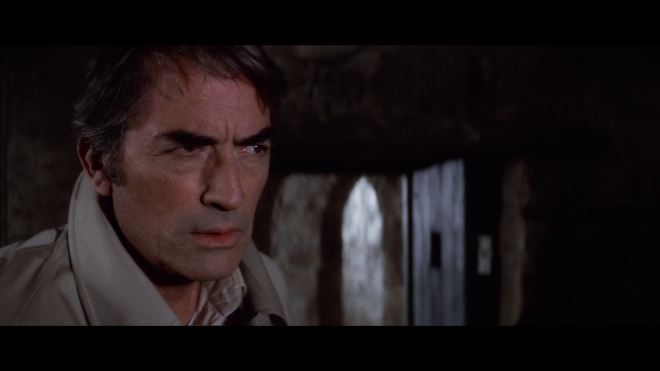 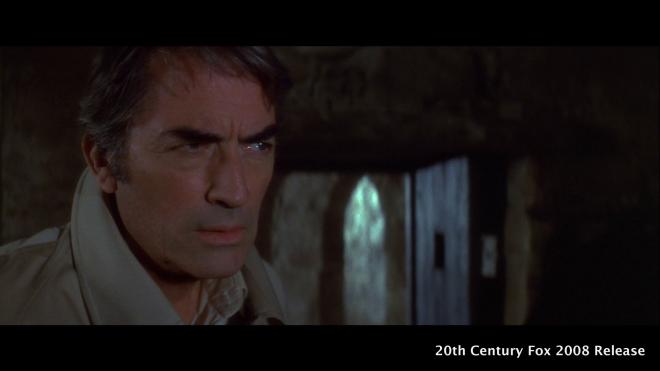 The Omen is blessed with a new 4K remaster from the original negative that easily upstages the 2008 Blu-ray release. Colors are better balanced, details are sharper, black levels inkier with much brighter more natural whites without any problematic blooming. The Omen has always been a soft-looking film with the intentionally diffused photography from cinematographer Gilbert Taylor so sharpness has never been something I've ever looked for out of this film but I was often amazed at the level of clarity this new transfer had to offer. It's most apparent in the numerous close-ups where details around eyes and throughout the face become that much more apparent. Medium shots with the scenery in the English countryside or when Gregory Peck and David Warner travel throughout Italy equally looks impressive - the scene at the monastery enjoys some extra fine details in the ghoulish makeup of the priest.

Colors are also notably improved over the previous release - and it's all the more apparent when you look at the sequels. Yellows have been nicely pulled back so that the image enjoys a much more natural primary-rich pallet. Flesh tones look much healthier with more reddish pink tones. Greens and blues also look more natural. Reds are very bright and bold now so the bloody stuff gets its chance to shine. Black levels get nice and inky with some great shadows - the graveyard scene with the dogs is nicely moody and grim looking. Whites are also better balanced now allowing them to be truly crisp without serious blooming. Speckling and damage have also been greatly reduced or removed altogether.

Last Halloween I purchased the 4K UHD SDR streaming copy on VUDU and I am actually much more impressed with this Blu-ray transfer than that streaming copy without any kind of HDR coloring. The colors on the disc are much more rich and vibrant where the streaming looks to echo the coloring of the older 2008 Blu-ray with paler reds and more pronounced jaundiced yellows.

Omen IV: The Awakening makes it's Blu-ray debut in decent enough fashion. For a very low budget made for television sequel it's not half bad looking actually. It's been some time since I saw the original DVD release but if I had a wager I'd say this was sourced from the same elements as the image does have a flattish dated quality to it. No serious compression issues but there is some occasional speckling and there does feel like some edge enhancement is left over with some lines not feeling as sharp as they could be. Colors are on point with some bright primaries while black levels and contrast hold together nicely but the image lacks a genuine sense of depth indicative of an older scan.

All other sequels retain their old video transfers from the previous set. The Omen 666's very dated transfer has not aged well at all in the years since it's original release and could have greatly benefited from an AVC MPEG-4 remaster instead of Fox's old MPEG-2 transfer. 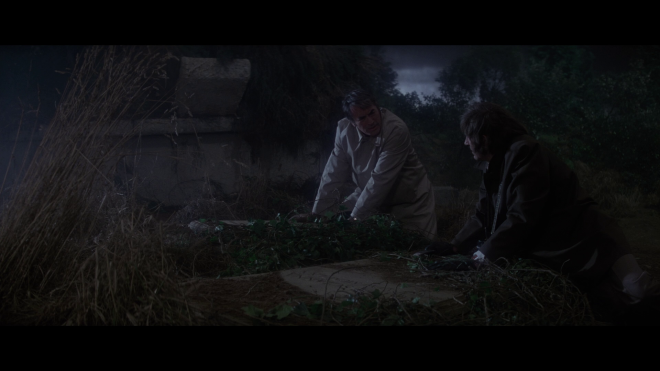 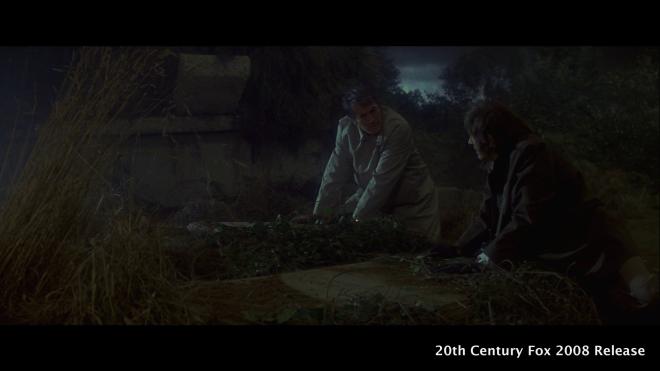 The Omen Collection Deluxe Edition skirts by recycling the same audio mixes available from the original 2008 set from 20th Century Fox. While I would have liked to hear that these movies were given updated audio tracks. The DTS-HD MA 5.1 tracks enjoy some decent surround activity but they're relatively unimpressive. The original mono mixes for The Omen, and Damien: The Omen II are still the better presentations while The Final Conflict maintains a decent enough surround mix even if it remains a front/center affair. The nice upgrade here is The Final Conflict is provided a really nice and effective DTS-HD MA 2.0 stereo mix that is much more prominent and effective than the forced surround track that doesn't really get a whole lot of extra oomph from the surround spacing. Omen IV: The Awakening is given a decent and active DTS-HD MA 2.0 stereo mix in keeping with its original television presentation. The mix may not be the most hair raising or dynamic, but for a TV movie, it covers the basics. The Omen 666 is given the same DTS-HD MA 5.1 track like the old Blu-ray and admittedly it's the best aspect of that film. There is some good creepy sound design to move along with the Marco Beltrami score. If that's the failing of this set was there doesn't seem to be an opportunity to improve the audio mixes. They're still good and get the job done, but given the franchise, something better would be welcome. 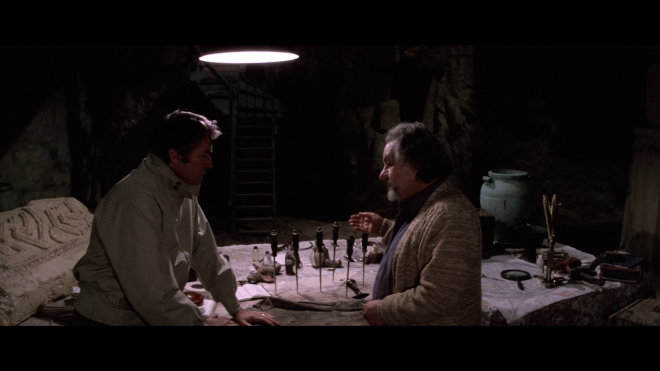 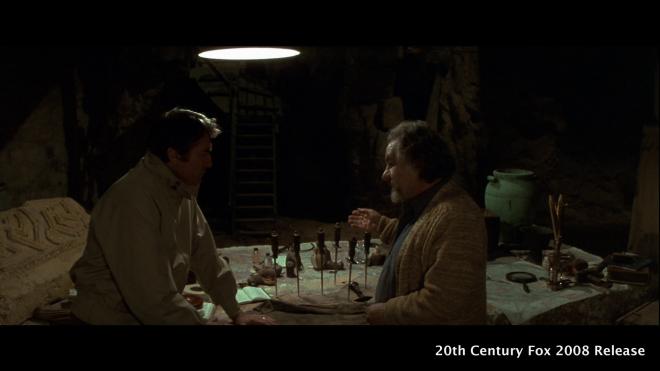 Scream Factory has always done an amazing job with their bonus features and this is no different. Talk about an incredibly exhaustive collection of new and old content! You've got practically an entire day's worth of bonus features in this set!

The Omen IV: The Awakening: 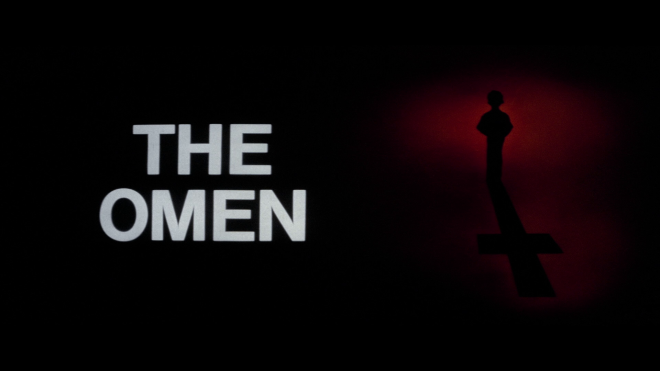 Even with the diminishing returns on the sequels and the unfortunate existence of the hacky remake, The Omen films are great entertainment. The original film is a true genre classic with an iconic Jerry Goldsmith Score and excellent performances from Gregory Peck and Lee Remick. The sequels would try to capture lightning in a bottle a second and third time, but couldn't quite muster the same sense of terror as the original. Omen IV: The Awakening was just a bad idea from the beginning and it's delightfully campy and entertaining in its own way - but not as a legit horror picture. Again, the less said about The Omen 666 the better - let's let that one stay buried.

Scream Factory gathers up all five films and delivers the world a solid 5-disc collection. The original The Omen is the reason to purchase this set as it sports a fresh new 4K remaster that really shows off the improvements in detail, black levels, and color. The transfer for Damien: Omen II and The Final Conflict are the same - but the whole set is blessed with an incredible package of new and archival bonus features. You have several hours worth of audio commentaries as well as new cast and crew interviews that offer a lot of insight into their respective films. The sturdier packaging alone over the old paper-thin case of the original set makes it worthy of an upgrade!

Even with some misgivings about the older audio mixes, and transfers for the sequels, I'm still calling this set Highly Recommended - it's a beast with tons of great content and entertainment value.