Overview - It is the 21st birthday of Prince Akeem of Zamunda and he is to marry a woman he never saw before. Now the prince breaks with tradition and travels to America to look for the love of his life.
OVERALL
For Fans Only

Hitting theaters hot on the heels of Eddie Murphy's string of mid-eighties blockbusters, 'Coming to America' reunited Murphy with his 'Trading Places' director John Landis, and paired the comic actor with the then-emerging comedian Arsenio Hall for this 1988 fish-out-of-water comedy. Nearly twenty years on, it may not be as enduring a film as 'Trading Places,' but it is still a fun and endearing flick, and one that clearly set the stage for Murphy's later shape-shifting roles in films like 'The Nutty Professor' and 'Norbit.'

The film tells the story of Prince Akeem (Murphy), a reluctant heir to the Zamundan throne who despises the arranged marriages of his African homeland. With the help of his servant Semmi (Arsenio Hall), he lies to his father (James Earl Jones) and heads to America to find true love. Posing as poor immigrants, the two men set up residence in New York and get a job working for the owner of a fast food restaurant, Cleo McDowell (John Amos). Before long, Cleo's oldest daughter (Shari Headley) catches Akeem's eye -- but he's desperate to keep his wealth and position a secret for fear that she'll fall in love with him for the wrong reasons.

Notably, along the way (in the first working-model of what has since become a staple of Eddie Muphy comedies), both Murphy and Hall portray multiple characters at the same time, with the help of exorbitant amounts of prosthetics.

I remember loving 'Coming to America' when I was younger. I'm not sure if it was the allure of an R-rating to a preteen or Murphy's chameleonic comedy, but I watched this film more times than I care to remember. With its release in high-def, I was really excited to watch it again for the first time in many years. Sadly however, while I still coasted through this viewing with plenty of nostalgic feelings from a time when my movie tastes were simpler, I now realize that 'Coming to America' is simply a clichéd and rather ordinary romantic comedy.

In this subgenre, it seems the male lead is always honorable, polite, and respectful regardless of how flat and two dimensional such characteristics make the character. While the intent is to convey the character's suave chivalry, it ends up making him seem as if he's stepped straight out of a fairy tale. There isn't any genuine achievement or satisfaction in watching Akeem finding love because what woman wouldn't want such a good-hearted prince, even if he's in disguise? By way of comparison, when the lead in a movie like 'The 40-Year-Old Virgin' finds love, it comes with a huge sense of universal justice and relief, but in 'Coming to America' it simply feels as if Murphy like obtaining the inevitable.

Don't get me wrong, I still had a good time watching this milestone flick in the Eddie Murphy catalog -- there are still plenty of solid laughs to be had, and I'm confident that longtime Murphy fans and newcomers alike will have a good time. I just doubt their enjoyment of the movie will be a lasting love. 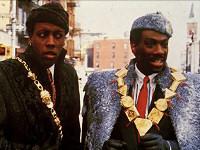 Proving once again that not all high-def transfers are created equal, 'Coming to America' comes to Blu-ray using the AVC MPEG-4 codec, and to HD DVD using the VC-1. While more often than not, the results of such split transfers are negligible, in this case, the HD DVD VC-1 transfer has slightly richer colors and sharper details than its Blu-ray AVC counterpart.

The film is presented in 1080p on both discs and looks fairly good for a catalog title (particuarly one that's nearly twenty years old). It certainly never achieves earth-shaking greatness, but it does do a good job of making the movie look a lot better than it has before. Skintones are natural, black levels are generally deep, and there's a nice increase in the dimension of the picture that wasn't present on the standard DVD. Texture details receive the most obvious upgrade and the scenes in Zamunda really come to life in high-def.

Unfortunately, the majority of the film is set in New York, where drab colors and boring background elements replace the gorgeous palette and conceptual costume design of the film's first few minutes. To top it all off, fine object detail is occasionally poor, some shots are soft, and film grain tends to come and go in waves. Noise is an issue at times and faint blocking is visible when flat areas of color dominate the screen. In short, while this Blu-ray transfer of 'Coming to America' is noticeable step up from standard-def, it fails to shine on high-def at the same level that some of the best catalog titles have hit. 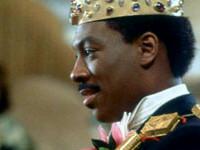 Not unlike the visuals, the audio package for 'Coming to America' is also a bit lacking. Again, Paramount continues its uneven approach to the etwo high-def formats, granting the Blu-ray edition a standard Dolby Digital 5.1 mix at 640kbps, and the HD DVD edition a Dolby Digital-Plus 5.1 surround track at 1.5 Mbps. The good news for Blu-ray fans is that despite the increased bitrate the Plus track on the HD DVD version doesn't sound any better than the Blu-ray edition. The bad news is that both mixes are equally disappointing.

As you might expect, most of the soundfield is locked onto the front channels -- but the track mainly fails to impress because movement feels stocky, accuracy is questionable, and a few lines of dialogue (listen to the conversations in the barber shop) are lost in the shuffle. Ambiance is notably present, but the bustling streets of New York sound shallow in comparison to a visit to the city. I was distracted by the stagey soundscape and had a hard time immersing myself into the auditory experiences of Akeem's new world.

On the bright side, the film's score sounds quite good -- drum beats are earthy, treble is stable, and the native instrumentation is well balanced across the soundfield. It almost seems like the score is the one element of the sound design that recived any care at all. The only downside to this is that the music pulses at a significantly higher quality than the rest of the audio, making the mix begin to feel like a sloppy blend of two entirely different tracks. In the end, the HD audio doesn't provide the upgrade over the standard DVD I was hoping for.

While 'Coming to America' has been on DVD since 1999, until now it has only been available as a bare bones release. As such, all of the supplements on this "Special Collector's Edition" (which is being concurrently-released on DVD, Blu-ray and HD DVD) are exclusive to this release of 'Coming to America.' While a commentary track, recent interviews concerning the film, or any number of other features would've gone a long way in bolstering this release, I suppose something is beter than nothing.

The main bulk of the supplemental material is housed within four featurettes that explore the behind-the-scenes work that went into 'Coming to America.' First, "Prince-ipal Photography" (25 minutes) includes on-set footage, behind-the-scenes interviews, and candid glimpses at the film's creation. The most interesting thing here is watching how completely invested Murphy was in nearly every aspect of the film.

"Fit for Akeem: The Costumes of Coming to America" (18 minutes) is exactly what you'd expect -- a somewhat dry look at the creation of the textures and clothing seen in the film. After that, "Character Building: The Many Faces of Rick Baker" (13 minutes) looks into the process of transforming Murphy and Arsenio Hall into various characters. Finally, "Composing America: The Musical Talents of Nile Rodgers" (12 minutes) is the best of the bunch and examines the often overlooked process of composing a score. While too much of this featurette is spent looking at Rodgers's other accomplishments, there is some good info and footage focused on his work on 'Coming to America.'

Next up is a rather basic "Photo Gallery," and an all-too-brief interview called "A Vintage Sit-Down with Eddie and Arsenio" (6 minutes). This quick conversation doesn't really go anywhere or reveal anything interesting -- instead it showcases both actors likeable personalities. It's easy to see where their on-screen chemistry came from and I had a good time watching them chat about the film, the cast, the crew, and the filming process.

Finally, we get the film's theatrical trailer, presented in full 1080p high definition. (Note that all of the other video supplements are presented in 480i/p only).

As a teenage fan of 'Coming to America,' the film didn't quite live up to my very warm memories, but I still found it entertaining and completely capable of finding new fans. Unfortunately, this Blu-ray presentation is largely a disappointment. The below average audio and the slim supplements package are both nothing to write home about, while the video presentation lacks the sheen of similar high-def catalog releases (particularly as presented in this Blu-ray edition).

Sale Price 4.6
List Price 14.99
Buy Now
3rd Party 19.51
In Stock.
See what people are saying about this story or others
See Comments in Forum
Previous Next
Pre-Orders
Tomorrow's latest releases