The King of Sleaze, the Prognosticator of Trash -- John Waters -- returns to the Criterion Collection with his odiferous Polyester. Waters' magnum soap opera melodrama spits some fun satire at the family drama genre with Divine as a mother with a sensitive schnoz who is powerless to stop her philandering husband and wild rebel children, but gets to woo 50s TeenBeat icon Tab Hunter! Absent from the collection since Laserdisc, Polyester returns to Criterion in a single disc set with a terrific restoration transfer, spot-on audio, and a bunch of great bonus features including Odorama Card! Highly Recommended.

Smell-sensitive housewife Francine Fishpaw's (Divine) life just took a nosedive. Her porno-theater-owning husband Elmer (David Samson) is skipping out with his secretary Sandra (Mink Stole). Her son Dexter (Ken King) is a serial foot-stomper wanted by the police. Her daughter Lu-Lu (Mary Garlington) is an uncontrollable pregnant teenager who *GASP* drinks beer and parties! The only friend in the world she has is the society debutant Cuddles Kovinsky (Edith Massey). Just when Francine's life couldn't look worse, all of a sudden the handsome Todd Tomorrow (Tab Hunter) arrives to whisk her off her feet - but can she trust him? Will Francine find true love? Or will everything end in disaster? Find out by watching John Waters' Polyester! 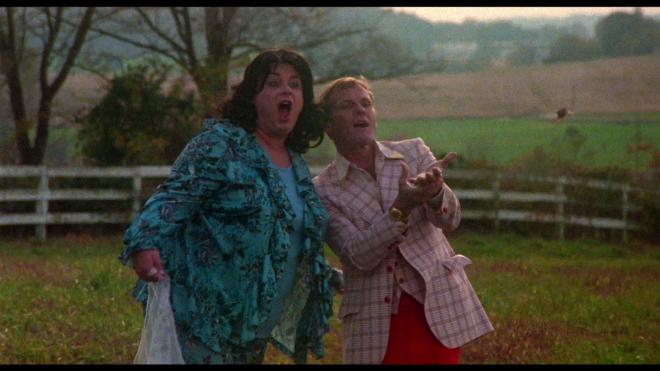 The best way to describe Polyester is as an interactive Soap Opera Melodrama via the warped sense of humor of John Waters and his Dreamland band of misfit filmmakers. It plays like a cheap day-time soap toasted with some after school special sermonizing with one over-the-top dramatic cliche piled onto the next and it's hilariously delightful. The organ chime stingers lean into the point at just the right moments. On top of that, you get Odorama -- the scratch and sniff card -- when prompted you can enjoy the odors of roses, flatulence, dirty shoes and any number of rotten smells!

My first time viewing of Polyester was on regular television, which seems very weird looking back at it today. The film was re-edited so the opening introduction to Odorama with Dr. Arnold Quackenshaw was removed. The image was also reframed to avoid any of the scratch and sniff number prompts because obviously the local Detroit network wasn't supplying the Odorama cards. So the film in its most neutered form was this bizarro parade of censored antics with breaks for Divine to go around and sniff random things without a real payoff.

I didn't get to fully enjoy Polyester in its truest form complete with Odorama cards until college where I got to go to a screening ahead of a visit by John Waters. It was a blast! To this day it's one of my favorite theater crowd experiences. It was so cool to see a theater packed with film students and faculty scratching at cards, taking big quick whiffs, and then letting out collective groans of disgust. It's a true crowd-pleaser of sleaze. It also marks Waters true turn towards "mainstream" filmmaking with a large (for him) filming budget and his first true movie star Tab Hunter as Todd Tomorrow.

Like the rest of Waters' films, they're an acquired taste. Either you love his brand of comedy or it's just not for you. Polyester satirizes soap operas but it also takes aim at stuffed-shirt overly serious family melodramas. What better way to do that than having Divine legitimately playing a woman who falls in love with Teen Beat 50s icon Tab Hunter who seduces her in classic form? Truthfully, Waters is damn lucky that Hunter was stuck doing dinner theater in the late 70s and early 80s because there's no one better for the role. Hunter maintains his classic hunky stature but is clearly having a great time playing in Waters' pool. Hunter never got to really let go and be himself in his early career and I can't help feeling like we missed out. Yeah, he's fine in studly dramas or adventure films, but he's got great comedic timing! He's a total goofball and leans into Todd Tomorrow and practically steals the show from Divine who delivers his best genuine performance. My only gripe with this movie is that there isn't enough Tab & Divine time! It's a hell of a flick and wild scratchy, smelly ride!

Polyester sniffs its way back to the Criterion Collection after having been absent since the Laserdisc days, sporting what I would call the very best cover art Criterion has ever commissioned. Pressed on a Region A BD50 disc, the disc is housed in a standard sturdy case with spin number 995. Included is a fold-out poster insert with an essay by Elena Gorfinkle that is a great read. The disc loads to an animated main menu of Divine and Tab Hunter frolicking featuring Criterion's standard navigation system. 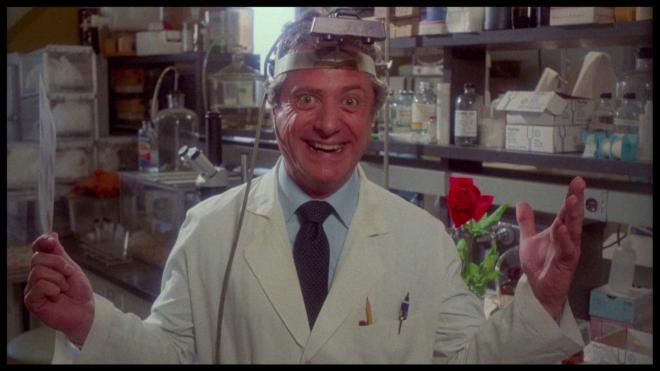 Culled from a fresh new 4K restoration, as with the rest of John Waters' releases from Criterion, this 1.85:1 transfer looks fantastic... for a Waters film. Working for the first time in 35mm, Waters' canvas is much bigger than anything he's done before like Female Trouble or Multiple Maniacs. He even makes it a point to film the intro of the film with the Odorama explanation in 1.33:1 only to have it expand to the BIG SCREEN like it's an event picture. Grain structure is thick but organic looking throughout. Even though this was his biggest movie at that time, it was still a modestly budgeted flick and it shows. Details are terrific allowing you to see how much more they were able to spend on production design and Mink Stole aping Bo Derek's silly braids from 10. A few soft spots persist but that's a constant companion of Waters' movies.

Colors are bright and cheery in a delightfully perverse way. Everything has such lush vivid primaries it contrasts nicely against the sleazy aspects of the story. Black levels are strong throughout - a couple of sequences get awful close to crush where anyone wearing black could get lost in the dark backgrounds but nothing terribly serious. Elements are in terrific shape without any sign of speckling or trouble spots. One again, we get another great Criterion presentation of Waters' work. 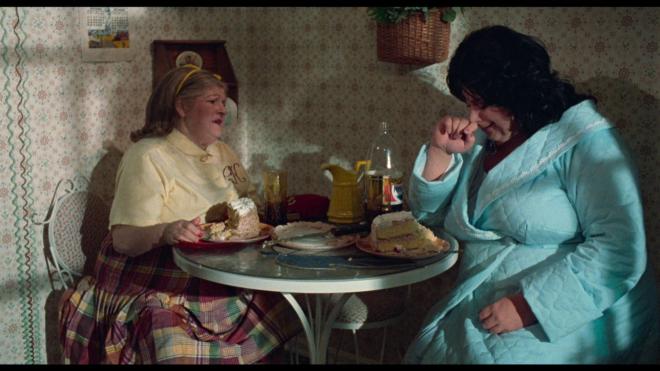 Polyester is given a crystal clear LPCM 1.0 mono audio mix - and like previous Waters releases - is very good for what it is. Dialogue comes through and is the primary element for most of the show. Sound effects, scoring, atmospherics are more incidental. There isn't much intention to the design beyond conveying the action on the screen. Music kicks up during expected dramatic beats - like the organ stingers for example. There's a lounge scene where Tab Hunter takes Divine dancing and it's a hoot - the music and crowd mixing is fantastic but it lends to comedy because their dancing is so terrible. Other moments like a car accident, some gunfire pop in the mix nicely, but this isn't overly aggressive. It's a John Waters movie and it sounds great without any hiss or pops. 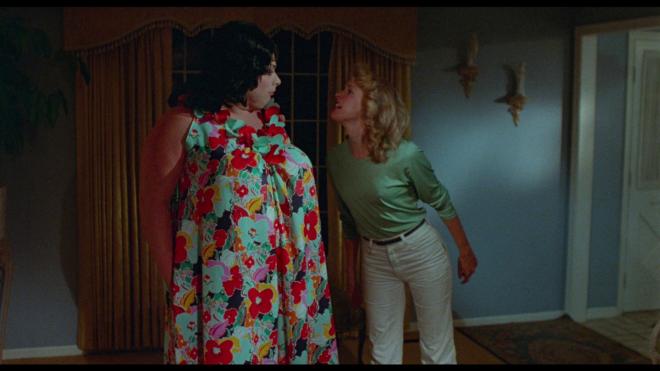 As with any great Criterion release, there is a great collection of bonus features. You get the original Waters commentary track from the Laserdisc, which is a great listen if you're an independent filmmaker struggling to manage a budget. The new interview material is also grand stuff and it's nice to see more outtakes from I Am Divine included here. 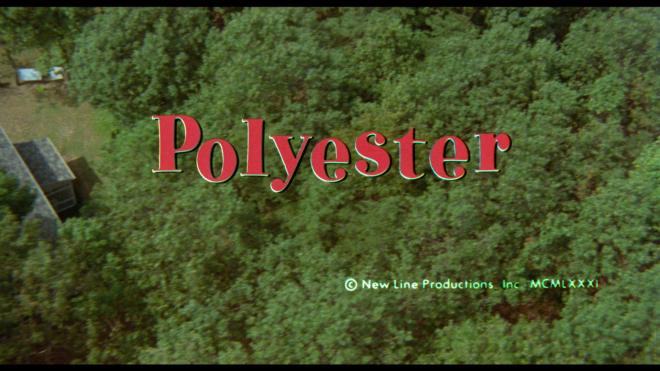 Not long ago, I thought I was going to have to invest in Criterion's old Laserdiscs to get the best packages for John Waters' movies. Over the last couple of years, they've done an amazing job bringing out the hits to Blu-ray and Polyester is another terrific release. It's an odd thing to say, given the movie, but I do hope that Pink Flamingos is on their horizon. Polyester showcases the smelly depths of suburban despair with a grand image transfer, a great audio mix, and a host of awesome new and archival bonus features. This one marks Waters' turn towards something resembling "mainstream" filmmaking even though it maintains his unique flair for the absurd and grotesque. Plus you get Divine romancing Tab Hunter - what more do you need in a movie?  Highly Recommended.