His name is not Mr. Sparkle Fingers or Thunder Crack - Shazam! strikes 3D Blu-ray in a three-disc set from Warner Bros. The DC Universe of Superheroes continues its upward swing with their latest solo superhero. A lighthearted comedic delight that's full of action and numerous comic book Easter eggs with hints for things to come while being its own adventure! Warner Bros. delivers another terrific post-conversion 3D Blu-ray effort. While not benefiting of the extra resolution and Dolby Vision HDR, the 3D delivers it's own unique and immersive presentation. Sadly, it doesn't come with Atmos, but the DTS-HD MA 5.1 mix is still solid stuff. If you love 3D, this one is Recommended.

For this 3D Blu-ray Review, I have to concur with my colleague M. Enois Duarte in his 4K Ultra HD Blu-ray Review - Shazam! was a delightful cinematic surprise! While I wouldn't necessarily call it a course correction for the D.C. Universe, I would merely say that they got the character right, adapted it for a modern audience, and threw in enough old school references to satisfy the longtime fans. You read enough comics, eventually, you pick up an issue of Shazam! - AKA "The Other Captain Marvel." While not a regular reader growing up, I dug the character and the magic mythos that followed him. 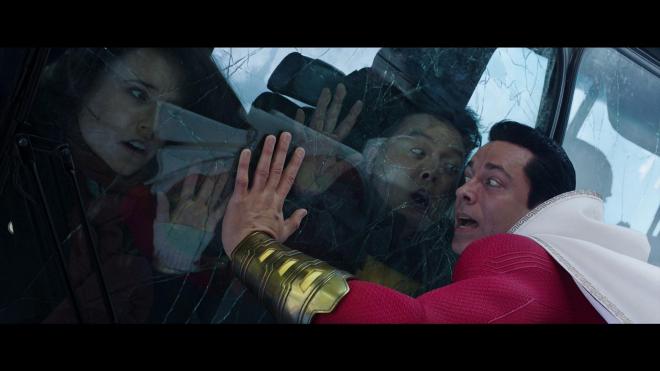 When I was a kid I was more occupied with Teenage Mutant Ninja Turtles, Batman, and Spider-Man - but occasionally if the cover art caught my eye I'd snag an issue of Shazam! and see what trouble Billy got himself into. It was the perfect fantasy comic that let you believe that even though you were a kid you could be a Superhero! As I got older I did my best to keep up with the character. When he made his grand entrance in Mark Waid and Alex Ross' seminal Kingdom Come mini-series is was a great surprise and the relaunch with DC's New 52 was a solid run I enjoyed quite a bit.

I had a blast with this movie in theaters. Working a full-time job, I rarely get to go to movies more than once in the theater but I damn well made sure I got to check this out twice. First time in 3-D, because that's my jam, but the second go-around was 2D IMAX and it was just as nuts. That big screen really helped me spot all the easter eggs. I've been through four viewings now and I'm still finding great references I never noticed. I also loved that for what feels like the first time in modern movie marketing the biggest and best moments of the movie weren't spoiled in the trailers. The last act was just awesome. Here's hoping Dwayne Johnson's Black Adam movie gets going soon because that crossover needs to happen fast! Whether or not the adventures of Billy and his magical lightning-powered alter-ego merge with the likes of Wonder Woman or Aquaman, I don't really care. It's more entertaining that he's a part of that world but nowhere near being a member of the Justice League.

ShazamI strikes 3D Blu-ray lightning in a Best Buy exclusive three-disc 3D-Blu-ray + Blu-ray + DVD + Digital HD from Warner Bros. The Amazon version is a 3D Blu-ray + Blu-ray + Digital HD - no DVD disc included. Pressed onto a Region Free BD-50 disc, the discs are housed in a two-disc sturdy case with the DVD occupying one bay all on its own while the 3D Blu-ray and the standard 2D Blu-ray are stacked on top of one another. The disc loads to a static image main menu. All of the bonus features are on the included standard Blu-ray disc. 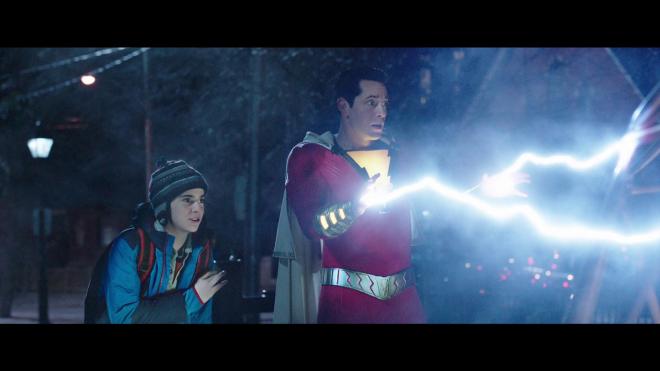 Shazam! supercharges 3D Blu-ray with a rock-solid 1080p 2.40:1 MVC-encoded presentation. While a post-conversion, Warner Brothers maintains their excellent standards for 3D presentations. The image has been brightened to compensate for the darkening effect of the glasses, but colors, whites, and black levels remain consistent with the 2D SDR 1080p Blu-ray. Details remain strong throughout although I felt like with this viewing I was much more aware of CGI effects than in my theatrical screenings.

Depth along the Z-axis is nicely rendered giving lots of spacial distance to objects in the foreground, middle ground, and deep backgrounds. The pictures I chose for this review are shots from scenes that I thought best exemplified the film's terrific sense of depth and dimension. I was most impressed with the reflections. The scene when Billy as Shazam is looking at his new face in the car mirror or when he catches the bus and he's there in the foreground, a layer of glass, his reflection in the glass, and then the hapless passenger is a really great effect. Likewise, flight sequences showcased some impressive deep background effects - especially when Shazam is just figuring out how to fly and nearly plummets to his death. It's a heck of a rush and more than adequately simulated vertigo. - Admittedly that might have been more effective for me because I have a pronounced fear of falling - thus the reason I've never been skydiving!

Black levels and contrast are also nicely defined. The opening winter shot and the subsequent car accident while very dark still offered up enough lighting and shadows to allow for a great sense of depth to the image. Whites are also under control - given the wintery setting white/grey skies could have been problematic but everything comes through with crisp colors without blooming.

Free of any ghosting issues, the one quibble I would pinch on is a little extra banding than what I saw on the 4K UHD Dolby Vision presentation or the 2D 1080p SDR presentation. This isn't a serious defect mind you, it doesn't break the three-dimensional illusion, but it's just present enough to be noticeable. Otherwise, I am very happy with this 3D release. It's a fun ride and welcome addition to the collection if you're a holdout for the format. 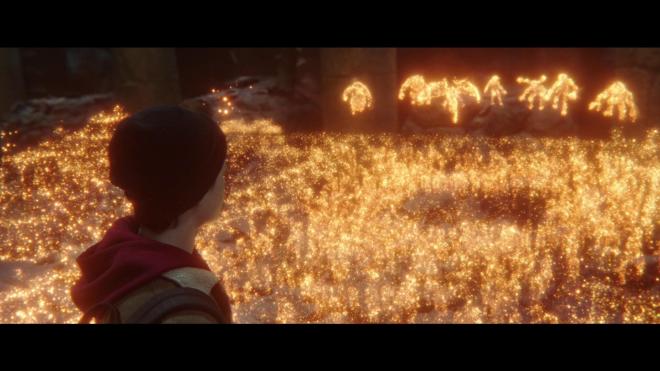 Unlike the 1080p SDR Blu-ray and the 4K UHD Disc, this 3D release does not benefit from an Atmos audio mix. That said, I'm still pretty damned impressed with the DTS-HD MA 5.1 mix. While it doesn't benefit from the overhead channels and the extra spacing for the elements, there are a lot of positives to highlight. For starters - the voices of the 7 Deadly Sins. Man, there is some great LFE in there! The mix is very well balanced so when those creatures speak in their low guttural tones it really kicks the bass and gives the mix some extra rumble. Likewise whenever Billy calls out "Shazam!" or uses his lightning powers the crack of lightning kicks in nicely offering some directionality to the mix.

Dialogue is clean and clear throughout and even during the busy action-focused climax everything holds together well. With that, I do wish the Atmos mix had been included here. While this track is great and has plenty of highlights, it's also a bit cramped and feels very tight. The Atmos gives a lot of the sound effects and background atmospherics more room to breathe. I'll admit that I watched the 4K UHD before jumping into this disc so that slide could be coloring the experience a bit. At the end of the day, there's little to complain about with this track. 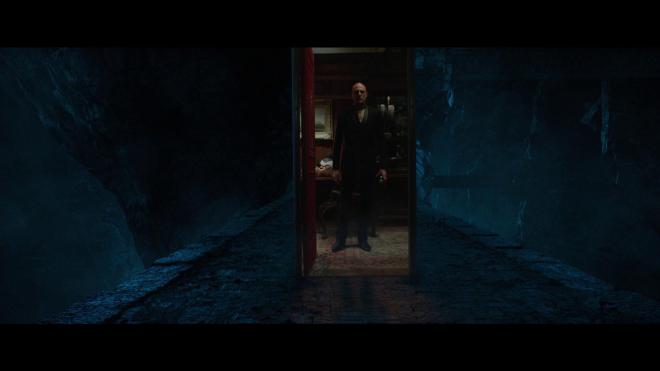 On the standard Blu-ray it features the same collection of bonus features as we've previously reported. Click Here for a full breakdown. 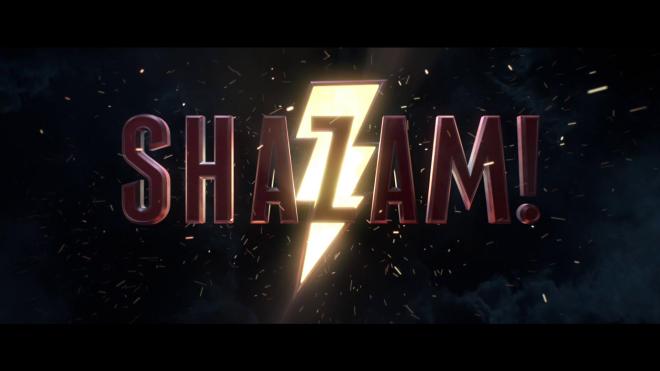 I loved Shazam! No, it's probably not the best Superhero movie I've ever seen, and it probably wasn't the best of the year, but it was exactly what I needed to see when I caught it in theaters. It didn't take itself so seriously but at the same time paid enough homage to the source materials that you can get excited about future adventures - that'll hopefully come sooner rather than later.

Warner Bros. delivers a first-rate 3D Blu-ray experience. I'm glad they haven't given up on the format as so many other studios have - at least in the United States. The extra depth and dimension adds a lot of kick to simple moments and brings the big action set-pieces to life. While it doesn't get Dolby Vision or Atmos, this is still a solid presentation and if you're still rocking your 3D TV - you'll be glad to have it in the collection, Recommended.

Sale Price 29.49
Buy Now
3rd Party 23.22
In Stock.
See what people are saying about this story or others
See Comments in Forum
Previous Next
Pre-Orders
Tomorrow's latest releases