You can't get too much of a good thing these days… or at least a crazy guy apparently. Director Mary Harron and Guinevere Turner set out to give their own spin on the Manson saga with Charlie Says. Matt Smith commands the screen in a terrific turn as the head of the family, the film's point of view from the women who followed the madman is a refreshing spin. It's light on thrills and chills, but great performances more than make up for its stuttering narrative thrust. Brought to Blu-ray by Scream Factory, Charlie Says features a first-rate A/V presentation but is sadly light on extras. Just the same, if you're hungry for more Manson in a non-exploitive or goofy fashion, this one is Recommended.

California just abolished the death penalty. Locked away in an abandoned block of the prison, Leslie "Lulu" Van Houten (Hannah Murray), Patricia "Katie" Krenwinkel (Sosie Bacon), and Susan "Sadie" Atkins (Marianne Rendón) wait to be moved to a maximum security facility for their participation in the high-profile murders of Sharon Tate and the rest of the Mason Family killings. Grad student Karlene Faith (Merritt Wever) is given an opportunity to interview and attempt to reach these young women and bring them back to reality. By understanding them, she hopes to make sense of the monster. 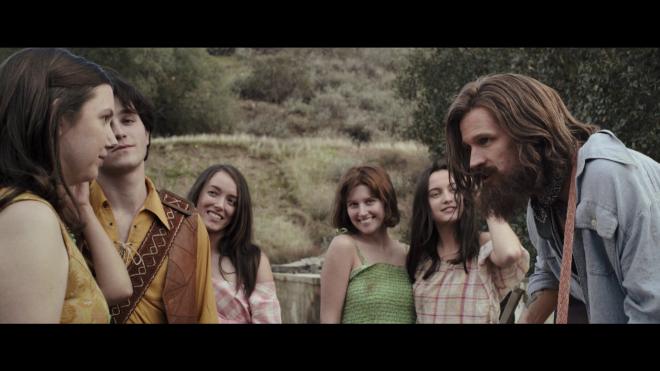 Kudos to Charlie Says filmmakers Mary Harron and Guinevere Turner for delivering what is arguably one of the more balanced and less exploitive Manson Family movies to come out this year. We got the entertaining fantasy "What if?…" version with Once Upon A Time… in Hollywood as well as the piece of pure exploitation trash with The Haunting of Sharon Tate. Charlie Says is more comfortably aligned with Mindhunter: Season Two where it attempts to find an understanding of how someone who was quite seriously mentally ill could turn innocent and idealistic young people into murders. With each session Karlene Faith, a new understanding of Manson's cultist techniques and brainwashing infused with narcotics unfolds. It's a fascinating film in that while Charlie Manson is featured prominently the film isn't so much interested in him as his effects on the people who followed him.

This is all well and good, however, Charlie Says does go a step or two too far with its empathetic drive to understand to the point that it's too sympathetic. Lulu, Katie, and Sadie were murderers. Brutal murders. There's no getting around that. Even all these years removed it's a tall stretch to be asked as an audience member to sympathize with Hannah Murray's Lulu. The film doesn't go so far as to be a loudspeaker for why they could/should be let out of prison - but it gets awful darn close for comfort. That is the only point I have against the film. Otherwise, I'd say this is a damn fine cinematic accomplishment.

If you're entering this film expecting some sort of horror/thriller, you've got the wrong movie. Harron does a magnificent job staging flashbacks juxtaposed to Faith's little ideological interventions. As Faith probes and ponders aspects of Manson's beliefs and Helter Skelter, the film flashes back to Lulu and the rest of the family gradually slipping down Charlie's rabbit hole of madness. At first, things feel playful and hippie-dippy innocent, just a bunch of societal odd ducks getting high and having sex. Then it slides into the mental and sexual manipulation of these kids as the most frightening ideas of murder, mayhem, and starting a race war against the Black Panthers becomes more and more of a logical idea.

Through it all, Harron gets some terrific show-stopping performances from each cast member. Matt Smith may get title duties delivers one of the best Manson portrayals - which is hard to say because I was really damned impressed with what Damon Harriman brought to the screen this year. They should put these guys on stage and have them throw down an old school Manson-off. They both brought the sly sanity to Manson's real-life crazy to be completely unsettling. Hannah Murray also delivers a solid performance as Lulu with Sosie Bacon bringing some unflinching menace as Katie Krenwinkel.

Though it may not quite be perfect, Charlie Says gets most of the beats right. It's crazy without being exploitive. While the release of the film no doubt had something to do with the release frame of Once Upon A Time… in Hollywood, it's at least far and away better than Haunting of Sharon Tate which I found to be absolutely trashy and tasteless. It's a solid filmmaking effort that gets under the skin with subtle probes and proves to be unnerving without going for shocks or gore.

Charlie Says lands on Blu-ray courtesy of Scream Factory in a single-disc Blu-ray set. Pressed on a Region A BD-50 disc, the disc is housed in a standard sturdy Blu-ray case with identical slipcover artwork. The case also has reversible artwork that's pretty good but not dynamically different. The disc loads to an animated main menu with traditional navigation options. 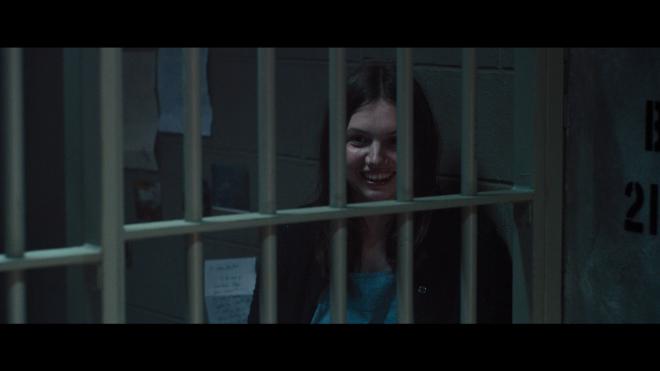 I hunted and pecked around for tech specs about this production, but sadly there isn't any info out there about source format or digital intermediate for Charlie Says. Regardless, this film's 2.39:1 1080p transfer is a winner! Details are exquisite! From the get-go, it's apparent that a lot of time and effort went into getting the sets and clothing just right. The Spahn Ranch sequences are particularly detailed. The standout is Charlie's leather fringe suit as it starts to become more haggard and ragged as his insanity builds. It's also a nice juxtaposition to the stark dark cellblock Lulu, Sadie, and Katie live. Throughout it all, colors are strong and prominent. The flashback sequences are a bit warmer with stronger earth tones where the modern scenes take on a cooler blue tone without impacting overall primaries. Skin tones are healthy throughout. Black levels are also deep and inky giving the image a nice rich sense of three-dimensional depth. Some of the flashback scenes where Charlie and the family are getting wasted or when he's raging about Helter Skelter is nice and bleakly ominous with only a lantern or a fire to light the scene and it looks great. Free of any compression issues, this is a near-flawless Blu-ray presentation. It may not be full 4K UHD but it shows there's plenty of life left in 1080p. 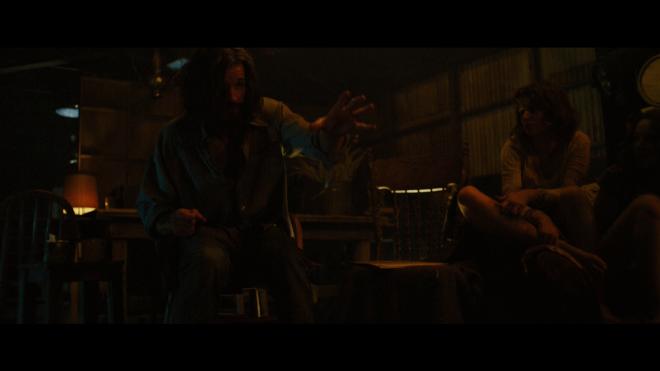 Packed with an excellent subdued DTS-HD MA 5.1 mix, Charlie Says gets a lot of life out stretches of silence and quiet conversations. This isn't a smash and bang action show and it doesn't follow horror tropes of shock and horror-filled with blood-curdling screams. Instead, it's focused on the slow slip into insanity where rational conversation delves into madness. The movie manages to pull this off by not trying to be overly showy. When the film focuses on the early flashbacks of the Manson family at Spahn ranch, their interactions are peaceful and open in nature - and there is a wide-open feeling to the atmospherics. When things start to get a little crazier, the film moves inside and the sound design becomes tighter and cramped giving dialogue a much louder presence. Not quite unnatural but I'd say purposefully tweaked to give an unsettling effect - Matt Smith going off on Helter Skelter is chilling as he just gets louder and louder to the point his voice dominates the mix. When the show is in the prison cellblock it's equally cramped but also oddly open feeling with echo allowed to travel. Surrounds are active throughout and depending on the scene in question the activity will vary. Everything is crystal clear here and levels are spot on. 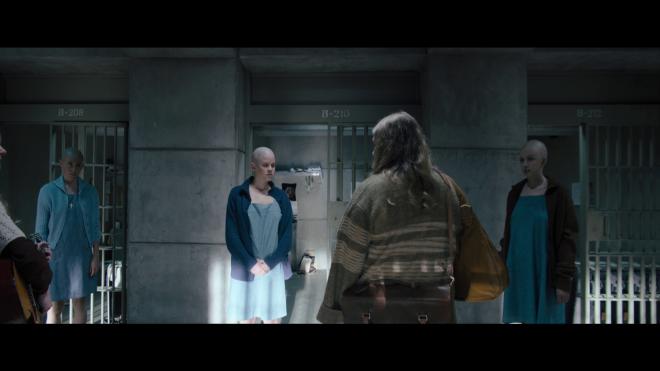 The big bummer of this disc is that there aren't more bonus features. What's here is the sort of tried and true EPK material that's interesting in its limited capacity. A Harron commentary would have been awesome or some more material covering Smith's coverage of Manson. Such as it is, this isn't terrible material, there's just not enough.

Charlie Says may be more Silence of the Lambs than something out and out crazy like American Psycho, but Mary Harron pulls off the material with interest and intent. While I felt the approach may get a little too close to giving some of Manson's followers an out or sympathetic excuse, the film doesn't shy away from the fact that they were the killers - not Charlie. It gives Charlie as a character plenty of room to upstage and Matt Smith is brilliant in the role, but this isn't just his story and the film is all the more powerful for not making him the front and center focus.

Scream Factory delivers a hell of a Blu-ray release for Charlie Says with a splendid A/V presentation. The video is crystal with amazing details and the audio is moody and effective. Sadly, bonus features are a bit of a wash. If you haven't gotten enough of Charlie Manson and his Family and want a new twist on a well-told story, Charlie Says is certainly an effective and engrossing watch. Recommended.

Sale Price 17.99
List Price 22.97
Buy Now
3rd Party 13.39
In Stock.
See what people are saying about this story or others
See Comments in Forum
Previous Next
Pre-Orders
Tomorrow's latest releases