High Life is an existential commentary on sex, survival, and parenting set on a spaceship. At its core, this brutal arthouse film paints with broad philosophical strokes which leaves its themes up for interpretation. Robert Pattinson leads a solid ensemble cast in French auteur Claire Denis’ debut English language film. Lionsgate releases High Life on Blu-ray with a solid A/V presentation and a so-so set of special features. If you’re facing an existential crisis and enjoy delving into the sexual desires of felons hurtling into oblivion then High Life is right for you. Recommended. 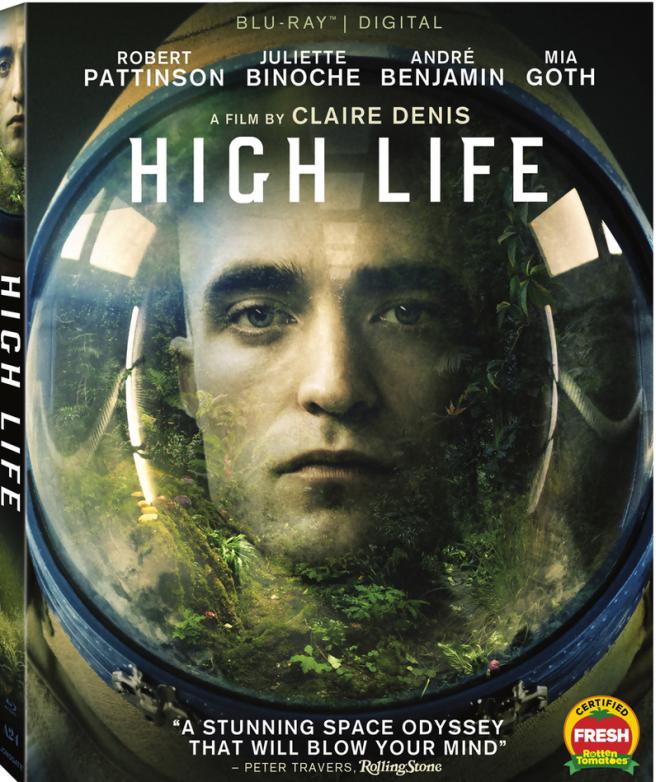 The film opens on baby Willow sitting in a makeshift DIY enclosure set on the floor of a rundown control room. She looks up at a monitor playing an old movie and starts crying. Outside the spaceship, her father Monte (Pattinson) tries to calm her as he works on repairing a damaged panel. He becomes distracted and drops a wrench into the blackness of space. Back inside, Monte goes about the mundane business of parenting a baby from potty training, bathing, and even harvesting food from their interstellar vegetable garden. The barren corridors and minimalist rooms offer a lo-fi aesthetic that reminds me of Dark Star. This pleasant scene of parent and child grinds to a halt once we get a look at the frozen corpses in the morgue. Through disjointed flashbacks and a nonlinear timeline, we learn Monte and the now-deceased crew are convicts from Earth given the option of death or to “serve science” in space. Sent to study black holes in deep space the convicts are under the supervision and care of an unhinged physician who goes by the name Dr. Dibs (Juliette Binoche). As Monte’s memories piece together the missing bits of the story, we learn that not everyone was compliant with the mission’s true agenda.

High Life isn’t a horror porno in space no matter what you’ve heard. Drenched in solitude, dread, and sexual desire, the film gently thrusts your eyes into the human condition as it races into the darkness at light speed. Unlike other science fiction films, High Life focuses not on outer space but inner space with a deep-seeded attention to the icky sticky biology of humans in a confined space. The sex and violence aren’t intended to shock. They may be shocking to you, but High Life assumes you can handle the existence of blood, semen, and breast milk (among other fluids). If all this sounds a bit erratic you’ve begun to understand the tonal shifts that plague this film. Denis appears wholly interested in the messy complexities of human experience and, through her hypnotic visuals and grim outlook, beauty lies just under the rip current.

Let’s get it out of the way and talk about the fuckbox. Installed in the bowels of the ship is a dark metal chamber meant to alleviate the sexual desires of the crew during their lengthy mission. Most use it frequently while Monte abstains earning him the nickname “Mr. Blue Balls”. For those familiar with the array of sexual aids and adult films, what you see won’t come as a surprise. How the film transports the viewer during Dibs’ hypnotic sexual experience is pretty amazing stuff to see in a mainstream-ish film. However, it’s just a lady getting her groove on, man. That’s all. The suggestion of an autoerotic room on a spaceship isn’t too far-fetched. Remember the Holodeck on Star Trek? This one is just more nuts-and-bolts than virtual reality.

Thanks to the lo-fi, junkyard aesthetic complete with pre-digital technology you won’t become distracted with fancy CG elements within the ship allowing you to experience the actor’s performances fully. Pattinson is low-key here offering a restrained and tender performance. His ability to remain detached from the intensity around him speaks volumes when baby Willow is introduced. Juliette Binoche as the “shaman of semen” Dr. Dibs is an arresting performance. With a waist-long mane of hair and menacing glances, the sultry Dr. Dibs is a mad scientist hell-bent on getting what she wants. A knockout performance. André Benjamin as the soulful Tcherny is a wonderful addition to the supporting cast. His connection to the ship’s garden provides a key line of dialogue summarizing the film: ““This little garden is teaching me to enjoy the present. Nothing else matters, man.”

Where High Life succeeds is in cutting away the meaningless mechanics of story. Who cares how the ship gets into space? Does the science of light speed really need explaining? Denis’ doesn’t seem to care for those extraneous bits. Feelings, emotions, and relationships are what matter most. It’s ballsy and I admire it. Mainstream audiences may have some trouble navigating the haunting dread and tender father/daughter moments with the same elasticity as the sex and violence.

The quote I placed at the top is one that stuck with me throughout the whole film. Early on as Monte is dealing with the struggles of parenting we’re given a look into a typical day. After a quick montage, the scene cuts to both father and child asleep. The baby wakes and cries. And cries. And cries. He holds the wailing child up to his face and says those same words I’ve said a million times. And yet Monte perseveres. Whether it's parenting or black holes, space travel is just a convenient device to illustrate our fear of the future beyond the abyss. High Life may not provide any answers but it reveals the beauty in our messy progress.

High Life arrives on Blu-ray thanks to Lionsgate. Housed in an Eco Elite case the BD50 Region A Blu-ray disc sits opposite a Digital Copy insert.  The disc opens to the Lionsgate logo, four trailers, then finally landing on the Main Menu screen. Scenes from the film play above typical navigation options. 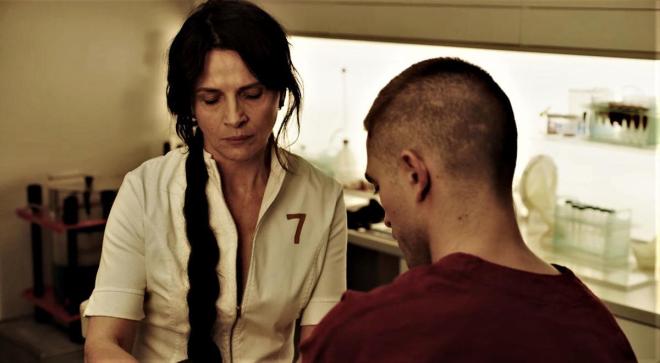 With 3 different aspect ratios shot with various cameras ranging from Super 16mm up to the Arri Alexa, High Life is a multi-layered beast no matter which way you look at it. In 1080p with an aspect ratio of 1.66:1 (European Widescreen for most of the film), this transfer provides a subdued yet organic and vibrant presentation. Colors are muted with emphasis on teal/orange from Monte’s spacesuits to the mood lighting on the ship. Fine detail is present but a softness prevails in shots giving an otherworldly tone. Heavy grain on Super 16mm flashbacks looks excellent. Blacks are inky and deep, holding nicely whether in the depths of outer space or the various chambers of the ship. Blocking and noise weren’t detected in a transfer that seems to handle everything thrown its way.

With the 1.66:1 aspect ratio, you’ll see thin black bars on the sides of the image rather than top and bottom. It’ll catch you off guard at first but once High Life starts jumping through time with a 1.33:1 flashback ratio it will all just blend together. Don’t worry!  You’ll be distracted with all the bodily fluids and crying babies anyway. 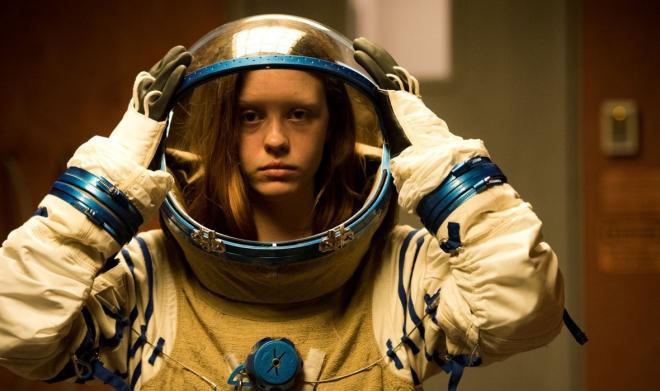 High Life is packed with a somber 5.1 DTS-HD MA audio track that creeps along with a lush yet muted presence. Scoring elements roll into the texture without you realizing their existence. Surrounds are used constantly to build tension and accentuate the loneliness of the ship’s barren interiors. LFE frequencies maintain restraint but build quickly to nearly overpower the texture. Dialogue is clear and clean from the center and front channels. I kept the volume at a medium level to allow the immersive scoring to fill the room. Erratic jazz noise infects the soundtrack during moments of terror and confusion. I simply love the choices made here from composer Stuart Staples. High Life constantly trades clinical and introspective electronic scoring for explosions of messy instrumental melodies. If you attempt a rewatch focus on the music and scoring to allow the experience to deepen your understanding of the film. 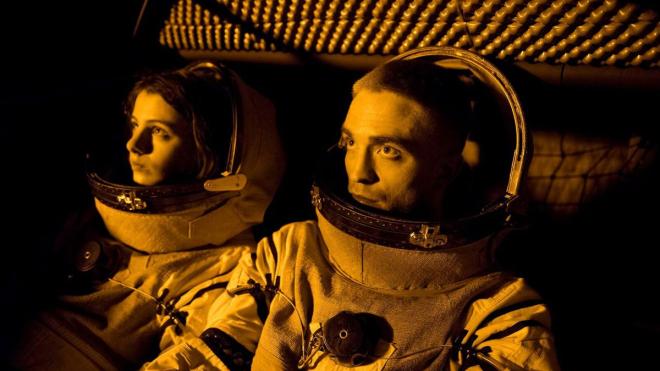 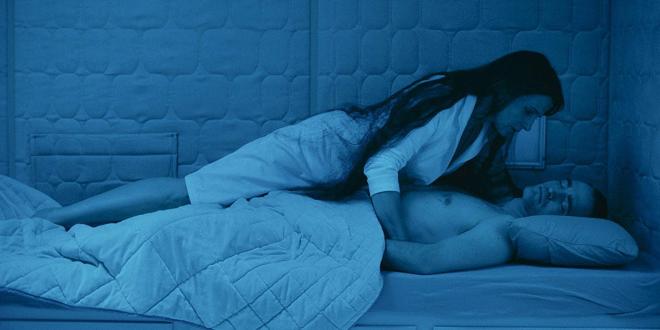 High Life is a disorienting drama filled with layers of existential dread and tender moments of humanity. In place of sci-fi conventions, we have a meditation on life bathed brutal violence and bodily fluids. Pattinson is subtle here even with the insanity coming in at every angle. This is a challenging watch that rewards those willing to open up to this devastatingly beautiful film. Lionsgate brings High Life to HD with a solid A/V presentation and a few bonus features to wet your whistle. Recommended.