Critters Attack! brings the horrific yet comical, flesh-eating aliens back to Earth to cause mayhem and destruction. With a few tricks up its sleeve, this Critters sequel never allows its characters or story to move past a surface level of development or fun, however, the filmmakers decided to leave out the CGI and give us practical effects and gore, which was nice. The film debuts on Blu-ray along with a hit-and-miss 1080p video presentation, a stunning DTS-HD MA 5.1 audio mix, and a few excellent bonus features. Worth A Look for fans of the franchise. 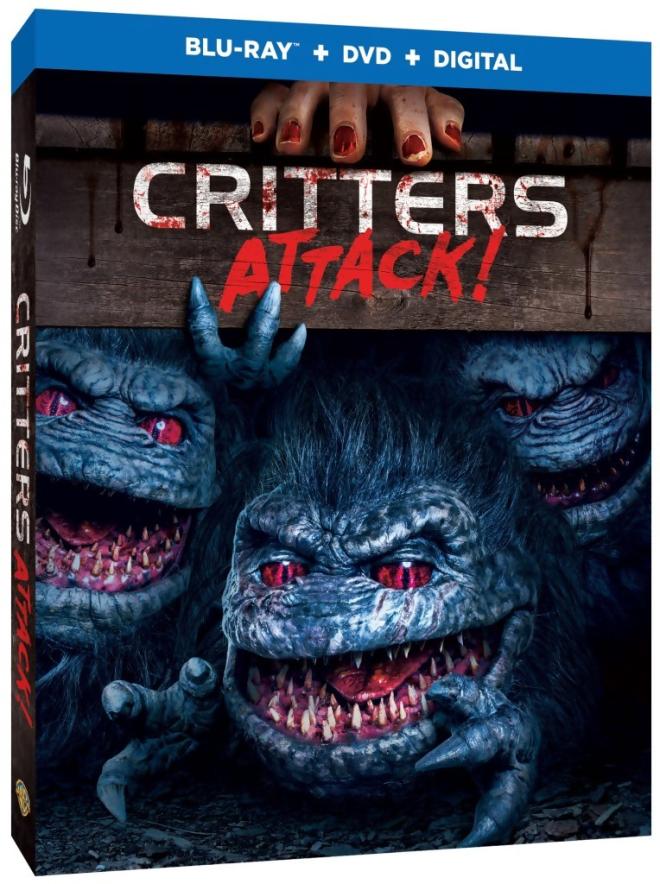 If there's one thing to know about those darn pesky Critters, it's that they consistently attack humans and chomp down on those fleshy limbs until there's nothing left but bones. We've seen it play our four previous times before, the last encounter being twenty-seven years ago with Critters 4, which took place in outer space. Interestingly enough, two different Critters projects have been released simultaneously, which have nothing to do with each other. Critters Attack! was written by Scott Lobdell (famous comic book writer, and scribe of Happy Death Day) and directed by Bobby Miller (a former producer at Buzzfeed), both of whom have forgotten what makes the Critters franchise so fun. This film is void of a sense of amusement, thrills, and any plot semblance that carries through to the end of the movie. The human characters and story get in the way of the Critters having a good time on screen in this boring, formulaic sequel. It's strange too because the filmmakers left the CGI on the doorstep and decided to have some good practical effects with creatures and gore, along with a bigger-than-normal cameo from original Critters star and horror movie heiress Dee Wallace. With these two inclusions on Critters Attack!, I thought I was in for something special, but both are fairly underused to bring this sequel to any real form of satisfaction, even for me - a super-fan of the franchise.

The movie follows a young woman named Drea who is hired to babysit a couple of young teenagers for the day in a small college town, where Drea is hoping to attend. The young teenagers need to be entertained but are bored by almost everything until they run into those hungry, angry critters. From here, it's a rinse and repeat set of scenes before the nostalgic climax takes place. Basically, Drea and the kids head to a location, ask for help, Critters Attack!, someone dies, and then we start all over again in a new place. This would be fine, but there is no push or forwarding any of the characters. They seem to just exist on-screen with no rhyme or reason, even if we see some form of backstory, including a tragic event in Drea's young life, which never concludes. Also, the dialogue is too simple and is delivered in mostly a monotone way that when certain characters finally learn to fight back, it all falls flat on its face in an unexciting way. On the other hand, the practical effects and gore are a lot of fun to watch.

The critters themselves look excellent -- with their leathery skin and real fur -- as they ferociously bite anything that moves. With actual red movie blood gushing, my inner-80s horror fan started enjoying the film. It was also nice to see Dee Wallace come back to the franchise even if she's not playing the same character - allegedly. She's not a lead character, but when she does show up, she owns the screen and I only wished they had given her more to do. Lastly, there was a new addition to the Critter folklore, in that there was one female critter, who seemed to be a "good guy" critter and wanted to destroy all of the ravenous male critters around town.

It's a female-lead film, both in human and alien form, which was a subtle way of saying something about the current social climate we're in, but I could only think of Gremlins 2: The New Batch in this situation. Critters Attack! has a couple of decent things going for it, mostly being the practical special effects and the appearance of Dee Wallace, but again, both of these aspects are underutilized. Even hardcore fans will be disappointed because the filmmakers failed to remember what made Critters so entertaining. Instead, we got some half-baked plot that took itself too seriously.

Warner Bros. rolls the Critters Attack! ball to Blu-ray + DVD + Digital Copy combo pack. You'll find both discs in a blue, eco-friendly plastic case with a cardboard sleeve, featuring hungry critters. There are digital copy redemption instructions for Movies Anywhere along with a paper insert that tells you how to let Warner Bros. know your opinion on the film.

I normally walk into these low-budget digital recordings with certain expectations and standards. While the image might look like a cheap daytime soap opera, there are some notable sequences where depth, color, and detail stand out, mostly with the practical effects of the Critters. Other instances with black levels don't fare so well. Most of the time, it looks like the filmmakers are using a high-end consumer-grade video camera with a zero filmic aspect to it. It might as well be a reality show at this point. When in daylight exteriors, the colors contrast nicely with green plants and brown mountains in the background with a nice blue sky. The dark black, furry Critters who make the rich, bright red blood flow constantly are well defined and a pleasure to watch. However, when nighttime falls, the black levels are murky and it is harder to distinguish the critters in lower lit scenes, in addition to some of the darker blue colors of background items and black shadows that bleed into each other. This is also where some uninvited banding pops up as well.

The 1080p HD transfer allows for some explicit detail in well-lit scenes that bring out the fantastic practical effects to a gooey climax. Individual hairs on the Critters are abundant and bring out the dirt or blood on their fur extremely well. Their leathery mouths and sharp teeth have all the necessary intricate details as well. When these pesky aliens feed on people, the blood and guts all look realistic with whit bones and pink and red entrails. Other close-ups bring decent facial features of wrinkles and makeup blemishes on the actor's faces, while background sets and items tend to look flat. Again, when the sun is shining outside, colors and detail tend to be at their best and provide a great viewing experience, but when the sequences arrive at a visually darker tone, that's where several issues rear their ugly head.

For a low budget film, Critters Attack! has a surprisingly great lossless DTS-HD MA 5.1 track that fully utilizes the surround speakers. There is also a Dolby Digital 5.1 Spanish track as an option. If you are already paranoid that something is haunting you in your house or some animal running around through your walls, then this audio track will only confirm your theory. There are some substantial audible moments where I thought some critter was in my house moving around when one of them was rolling through a house or the bushes over the speaker system.

The Critters make intense noises through these locales, and environmental sounds are fluid and big. As these violent fur balls roll and travel to their next victim, you can hear the smooth transition from speaker to speaker. Not only that, there is a small low end of bass adding depth to the atmosphere. There were a couple of instances where the bass was on the light side of things, though, such as futuristic gun blasts and the big ball of critters that should have had a more pronounced sense of depth. It's not a huge complaint, but I thought that was lacking. Dialogue comes in clear and loud to round this audio track out, but the highlight here is the attention to sound effect positioning and directionality.

I firmly believe that these bonus features are better than the movie itself. They even got Dee Wallace in on most of the extras. I highly enjoyed the practical makeup discussions and behind-the-scenes that focused on working with these puppets, along with everyone enjoying coming back to the franchise where some Easter eggs from the original film were used here. Not to mention, commentary from an actual critter.

Unfortunately, Critters Attack!  doesn't quite stack up in the character or story department, none of which go anywhere or provide an exciting experience. That being said, Dee Wallace and some old school practical effects and gore make this sequel worth a watch for the franchise's hardcore fans.

The Blu-ray boasts a mixed-bag of a video presentation -- the critters look great in well-lit stations, but image quality becomes gloomy in darker territory. On the other hand, the DTS-HD 5.1 is miraculous and adds a much-needed element to an otherwise stale movie. Lastly, the few bonus features are well worth your time. Worth A Look!

Sale Price 9.99
List Price 14.97
Buy Now
3rd Party 9.99
In Stock.
See what people are saying about this story or others
See Comments in Forum
Previous Next
Pre-Orders
Tomorrow's latest releases