Mothra's follows a pretty tried and true form about a gigantic creature punishing mankind for the exploitation of the natural world - but that doesn't mean it isn't a hell of a great time! Mill Creek Entertainment unleashes the beast giving the original Mothra a terrific Blu-ray for the first time in North America, featuring both versions of the film on one disc with a great image transfer and solid audio mixes to match. While the bonus features are on the light side, the spiffy SteelBook packaging makes up for it. Highly Recommended.

"Mothra, she'll rescue us and return us to our island!"

During an expedition to explore Infant Island that is supposed to be irradiated and uninhabitable, a team of researchers encounters a tribe of natives who worship the two tiny princesses The Shobijin (Emi and Yumi it?). The nefarious businessman Nelson (Jerry Ito) kidnaps the two 12-inch tall princesses and forces them to perform in his Singing Fairies wonder show. Little does he know the sweet wonderful song is actually a plea to their mighty god Mothra to rescue them. Hatching from an egg, the larva Mothra charts a direct path towards Tokyo destroying everything in her path. Good-natured reporter Fukuda (Frankie Sakai) and scientist Dr. Shin'ichi Chujo (Hiroshi Koizumi) will have to find a way to rescue The Shobijin from Nelson before Mothra emerges from her cocoon and destroys all of Japan. 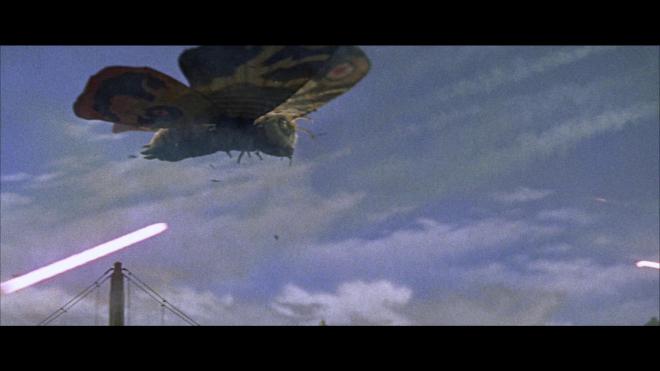 Growing up, my go-to giant monster movies were the Shaw Brother's Ultraman knockoff The Super Inframan and Godzilla vs The Sea Monster which prominently featured a near comatose Mothra. I burned countless hours wearing out my tapes with repeat viewings. I just couldn't get enough of them! My dad would frequently snag a Godzilla movie here and there at the rental shop and occasionally the original Mothra would make the stack. When you boil it down, it's basically an updated King Kong - a schmuck businessman exploits a wonder of nature by forcing it into a show to massive crowds only for things to go really bad very quickly. This time it just happens to be two tiny women with a telepathic link to a gigantic moth!

In truth, there aren't really that many surprises in Mothra. If you've seen one Toho kaiju movie you start to feel like you've seen them all. Most of their big creatures go through this process of pseudo-redemption where their origin movie showcases them as a destructive unstoppable enemy. Gamera was a friend to children. Godzilla would show up at the end of the movie when Jet Jaguar couldn't stop Megalon on his own. Mothra charted the same course. Sure she could cause a little wholesale destruction here and there, but she also saved the humans from a nuke in Godzilla vs The Sea Monster!

What I loved about this most recent viewing of Mothra was that it felt like it was the first time I was actually watching the true movie. I've just never seen it look so good. VHS tapes could have funky edits and would look like the equivalent of cinematic mud while I never saw much of an improvement in the DVDs to make owning them worth it. Kudos to Mill Creek Entertainment for upping their game with this release. It would have been great for both the American and Japanese versions to have their own separate discs to give them extra breathing room, but they look and sound better than I've ever seen them. Maybe even a little too good as you can clearly see painted walls for some of the model cities - but that's all part of the fun of a Toho production!

Mothra makes her grand North American Blu-ray debut courtesy of Mill Creek Entertainment in a single-disc Blu-ray SteelBook set. Pressed on a Region A BD-50 disc, the SteelBook is a pretty damn classy piece of artwork with a plastic slipcover to complete the image. Thankfully this doesn't add a significant size increase so if you secure your SteelBooks in plastic protector cases the whole thing fits in there nicely without being too snug. The disc loads to a static image main menu with traditional navigation options. 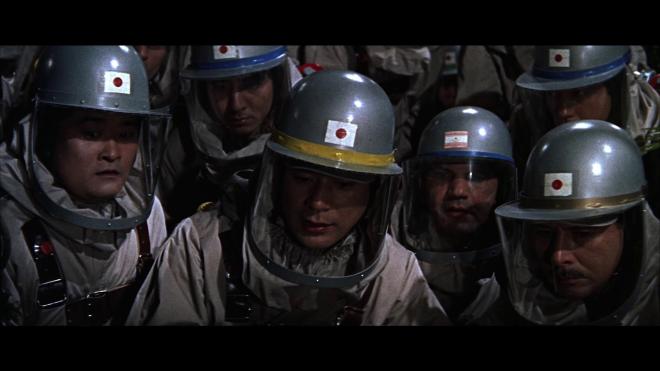 While I don't have any info about the source or vintage of this 2.35:1 1080p transfer, I have to admit that Mothra makes for a damn pleasing Blu-ray release. If I had to bet, I'd say it was the same one Rifftrax used a year ago for their live theatrical experience. We get both the 90-minute U.S. Cut with Columbia logo and the 101-minute Japanese Cut with Toho logo on one disc. Bitrates kick at a respectable 30bps average throughout most of the film. What we get is a bright, colorful, and often striking image that occasionally deals with some flatness issues but nothing terribly serious.

Fine film grain is readily apparent giving the image a nice film-like appearance that provides plenty of details and textures to enjoy. Colors are robust and vivid throughout with strong primaries and healthy flesh tones. Black levels most of the time are spot on giving the image the desired deep inky presence while offering nice shadow gradience for some image depth.

However, my primary issues revolve around scenes taking place on Infant Island - which is a solid stretch of the film - where some post-production color manipulation was done to give a twilight day-for-night look. Details are still strong, and bright colors have their desired punch, but the image has a notable flatter feel to it. Especially in comparison to full daylight sequences or the scenes of the Larva Mothra swimming towards Japan where you can clearly see the textured painted background of the set. The only damage I saw was some sporadic speckling and some scratches during optical effects with the tiny Shobijin in their cage or wide-shot optical inserts as Mothra destroys a city with human onlookers in the foreground. Those are baked in issues that can't really be fixed. No signs of egregious waxy DNR. Considering the horrible VHS releases and the iffy-at-best DVDs released over the years this is a clear upgrade that should make fans happy! 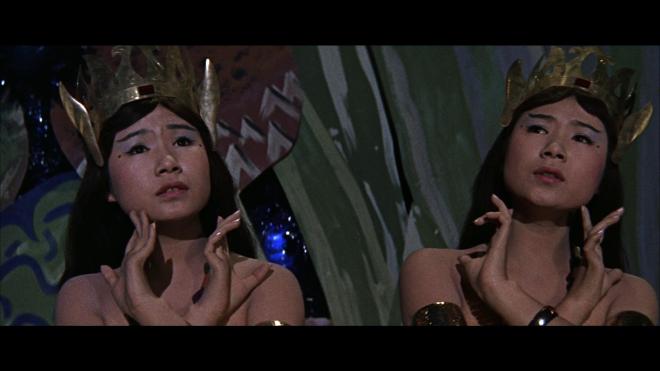 Mothra hatches from her egg with a pair of audio tracks. A decent English dubbed DTS-HD MA 2.0 mix for the U.S. release and a rock solid Japanese DTS-HD MA 2.0 audio mix for the original version. After watching both versions virtually back to back - I frequently switched between the versions as I watched to hear how certain scenes played out - both are very good, but the Japanese track is the clear winner of the race. The opening theme music is the first difference maker as the U.S. release has a notable shrill tinny quality to the music. The dubbed voices come through fine and the added sound effects layering is quite nice, but it's the Yûji Koseki score that suffers.

On the flip side, the Japanese DTS-HD MA 2.0 track is solid as a rock. The soundtrack feels much more full and spacious with terrific low tones. None of the tinny quality noticed in the English track to be found here. To top it off, Larva Mothra and proper Mothra creature sounds enjoy a bit more resonance. Those iconic screeches may sound silly but they're the perfect "oh yeah!" indicator that some amazing miniature city set is about to get the crap kicked out of it. While the differences between the two mixes are only slight, they're notable. I'd give the Japanese track a solid 4/5 while the English mix earns a respectable 3.5/5. 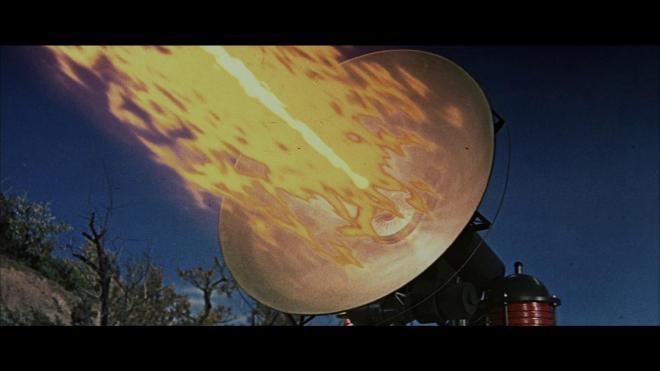 If ever there was a time for Mill Creek Entertainment to pull out the stops on the bonus features, Mothra would be it. Unfortunately, the bonus features package isn't all that robust consisting of an Audio Commentary that's well worth a listen but backed by a pretty standard photo gallery selection and the theatrical trailer. 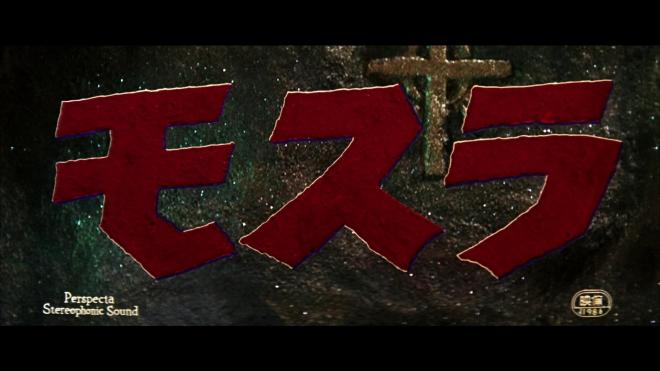 Godzilla may be the big guy taking on the box office at the moment, but it's Mothra's turn to shine on Blu-ray. Sure, the film follows a pretty tried and true form about a gigantic creature punishing mankind for the exploitation of the natural world - but that doesn't mean it isn't a hell of a great time! Spawning her own trilogy and a frequent friend of Godzilla, Mothra is a solid creature with a wild world to inhabit. It's great we finally get a solid release of the film that spawned her.

Mill Creek Entertainment unleashes the beast giving the original Mothra a terrific Blu-ray for the first time in North America. We get both versions of the film on one disc with a great image transfer and solid audio mixes to match. While the bonus features may not be the draw they could have been, the spiffy SteelBook packaging makes up for it. If you like your creatures big and destroying toy cities wholesale - you'll get your money's worth with Mothra - Highly Recommended.