Do the Right Thing - Criterion Collection

Spike Lee's seminal Do The Right Thing returns to the Criterion Collection in grand form. Easily the best, and probably most important, film of his long career, Do The Right Thing encapsulates one block corner of one neighborhood and examines all of life's little intricacies from achieving the American Dream to absentee fathers to racial injustices and the blurry lines in between. The Criterion Collection issues a beautiful 2-disc set sporting a vivid and colorful new 4K restoration, a solid audio mix, and a massive collection of new and archival bonus features. Not only is it an incredible film but if you're a Criterion collector, this is an essential piece of the collection. Must Own.

It's going to be a hot one in New York with temperatures in the scorching 100s and beyond. In Brooklyn's small Bed-Stuy neighborhood, things are going to get even hotter. Delivery man Mookie (Spike Lee) is out to get paid by his pizzeria boss Sal (Danny Aiello). Like every other day, Mookie gets caught in the squabbles of Sal's two sons Pino (John Turturro) and Vito (Richard Edson). Like every other day, Mookie scuttles up and down the block making deliveries bumping into colorful locals like Da Mayer (Ossie Davis), Mother Sister (Ruby Dee), the music-loving Radio (Bill Nunn), and Buggin (Giancarlo Esposito) all while local DJ Señor Love Daddy (Samuel L. Jackson) blasts the tunes. But unlike every other day, simmering gripes and festering prejudices will come to a boil and the neighborhood will never be the same again. 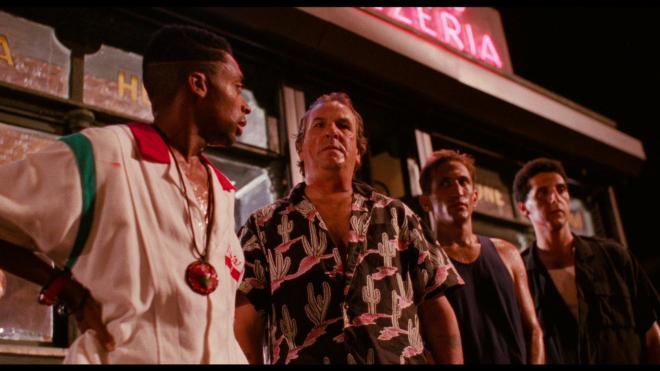 Back in 2009 our man M. Enois Duarte took a look at Universal's first Blu-ray outing and wrote a terrific REVIEW.

This film has been dissected and digested by so many that I don't really have any real analysis left to offer. All I can add is how I discovered this movie. Back in the early 2000s, several years before Blu-ray or digital streaming or even Netflix's by-mail rentals were a thing, I discovered Do The Right Thing like most folks. I rented the VHS tape. My parents were going to be gone for a week to celebrate their anniversary together and I took a week off my crappy summer job so I could have some fun too. I spent that entire week shuffling to this one video rental shop in Ann Arbor that offered 6 classic movie rentals for $5 for 5 Days. I had an amazing crash course on a wide variety of genres from Italian Giallo movies to German silent films. Do The Right Thing was one of many films I watched that week that simply blew me away. 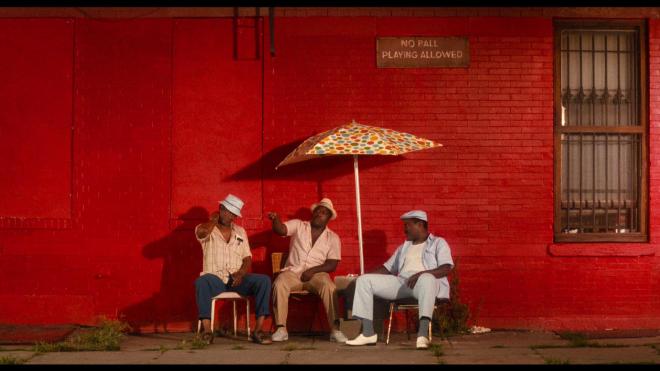 This wasn't my introduction to Spike Lee's movies. I had seen Jungle Fever, Malcolm X, and enjoyed Summer of Sam quite a bit despite some odd story tangents. Do The Right Thing was just a stunning feature to me. Even in that cropped 4:3 television screen the framing, the colors, the editing style, all of these hallmarks of Lee's films came together in this picture-perfect mosaic of everyday life. As Mookie travels around his neighborhood we see a little piece of the America he knows. Warts and all, it's his home and when tensions boil over he's the one to flip the steam vent the only way he knows how. It's a hell of a film and one I feel requires multiple viewings in order to fully absorb. At any time the film is a searing racial drama, a heartfelt family flick, and a damn funny situational comedy. Lee perfectly balanced these elements to craft one of the best films of his long prolific career.

Do The Right Thing returns to the Criterion Collection in a beautiful 2-disc set. Pressed on a Region A BD-50 disc, the disc is housed in digi-book packaging with new custom art depicting the Bed-Stuy neighborhood and the various characters with a book-style outer sleeve with spine number 97. Also included is a massive 106-page book featuring essays and excerpts from Spike Lee's production journal. The disc loads to a static image main menu with Criterion's traditional menu navigation system. 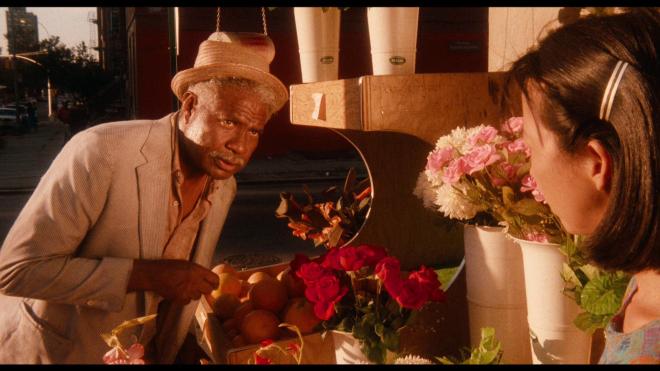 While the previous 2009 release saw solid A/V marks, I never picked that disc up so I don't have it offer comparison screenshots, but I am stunned by this new release's image quality, which features a 1080p 1.85:1 transfer sourced from a new 4K restoration effort that was supervised by cinematographer Ernest Dickerson.

Details are stunning. Colors are vivid. Black levels are deep and inky. Contrast is on point. Really, this is one of those transfers you need to see to believe. I was floored by the levels of detail in this image. Facial features, bricks on the building, the intricate molding of the tiles of Sal's Famous Pizzeria - everything is on display here. Film grain is fine but visible creating a lush film-like appearance.

Colors are a particular showstopper for this film. The color pallet was already pushed to favor orange and red tones and that effect comes through beautifully here. While the overall red push gives the film the much-needed feeling of a heatwave, there is still plenty of room for golden yellows and piercing blues to pop. Whites aren't thrown out of balance either. Mookie's pizza delivery shirt is a nice crisp white. Flesh tones are healthy and natural.

Black levels are nice and inky throughout the entire run of the film. Shadows come through with nice shading to give the image some impressive depth. Lee's use of cantilevered camera angles really heightens the effect nicely. At the same time, contrast is on point allowing for whites to pop without blooming. Given this is a new restoration effort I'm pleased to report that the image is free of any speckling or damage of any kind. Free of any banding or compression artifacts, short of a 4K UHD with HDR release, this is like the best Do The Right Thing will appear on home video. 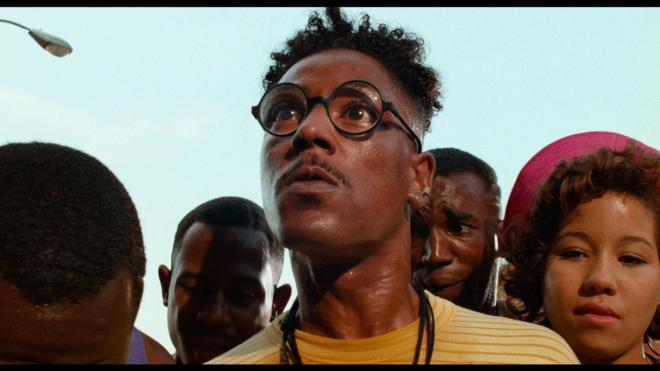 There isn't anything in the restoration notes to suggest otherwise, so I'm left to believe this is the same DTS-HD MA 5.1 mix that appeared with Universal's release back in 2009. Which is fine! This is an often aggressive mix with engaging dialogue, crowd scenes, and action beats. Public Enemy offered up a few tracks for this movie and they're prominent without overpowering everything. This is especially the point with the scenes featuring Radio Raheem blasting his boombox in Sal's Pizzeria. Dialogue is clean and clear throughout. There is plenty of great imaging to the mix, especially whenever Mookie goes out for deliveries and is crossing the street. In these moments you can hear various characters and sound effects occupy individual points within the soundscape. Taken as a whole I don't have any issues with this mix. It keeps key audio elements present in the right moments giving the dramatic beats the level of impact they deserve and the comedic moments the room for a laugh or a chuckle to resonate. 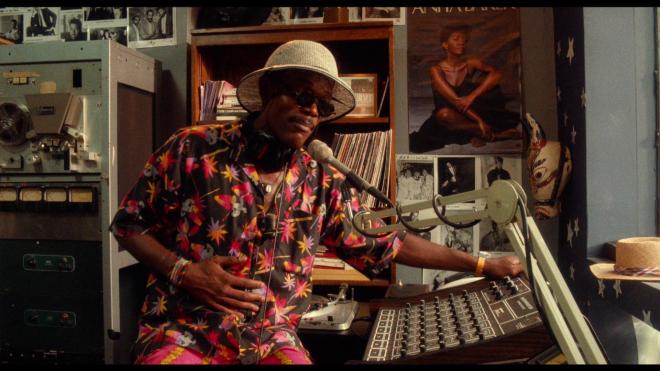 Like any good Criterion Collection release worth its salt, Do The Right Thing comes stuffed to the gills with a truckload of new and archival bonus features. There's so much amazing content here that it's hard to sum up the highlights. The commentaries are all pretty great. The deleted and extended scenes are fascinating in their own ways but I can see why they were cut. On top of the production diaries and script excerpts, you have two discs of content to pick through! You've got your work cut out for you in all the best ways. 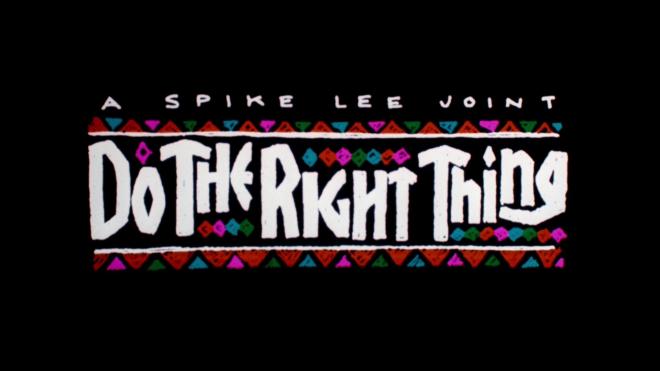 Do The Right Thing hits hard. It deviates into some comedic territories. The stories and the lives it explores may seem like non-sequiturs, but Spike Lee manages to capture a beautiful but brutal slice of life. Filled with amazing performances, this pitch-perfect drama, unfortunately, remains ageless as we're still confronting issues this film raised decades ago. Easily Spike Lee's best and most daring and probably the most important film of his career.

The Criterion Collection welcomes Do The Right Thing back into its fold with a beautiful two-disc set. The film sports a terrific transfer sourced from a brand new 4K restoration. On top of an effective audio mix, this set is loaded with an exceptional assortment of worthwhile bonus features. If you love important cinema, if you're a collector of Criterion, or if you simply just love amazing films, Do The Right Thing is a Must Own.

Sale Price 19.99
List Price 39.95
Buy Now
3rd Party 15.86
In Stock.
See what people are saying about this story or others
See Comments in Forum
Previous Next
Pre-Orders
Tomorrow's latest releases