Overview - Kevin Costner (Dances with Wolves, Field of Dreams) and Madeleine Stowe (12 Monkeys, The Last of the Mohicans) ignite the screen in this deeply erotic and suspenseful thriller from the director of Top Gun and Crimson Tide. Costner stars as Michael J. Cochran, a former fighter pilot who finds himself irresistibly drawn to the beautiful wife of an old friend. Anthony Quinn (Lawrence of Arabia, The Guns of Navarone), in a powerful performance, co-stars as the husband who reacts with uncontrollable rage to the double betrayal. His brutal attack on the adulterous lovers sets into motion a terrifying cycle of retribution that cannot be stopped, making REVENGE an instant classic.
OVERALL
Bad Flick, Good Disc

Having established himself with a series of guilty pleasure flicks of the '80s and '90s, director Tony Scott has injected an intellectual element into the clichéd testosterone-fueled action extravaganzas of the time. Over the years, he has gained nearly as much notoriety as his brother Ridley and has continued to develop the raw, kinetic visual style that's become its own source of momentum within his work. 'Revenge' came just a few years after 'Top Gun' and hit theaters with a ridiculous level of expectation. Unfortunately, in this case, Scott failed to deliver. 'Revenge' is a clumsy, ham-handed examination of vengeance without much consideration to its actual effects, consequences, or function in society.

After leaving the Navy, Jay Cochran (Kevin Costner) decides to visit Tiburon Mendez (Anthony Quinn), an aging businessman who happens to have a gorgeous young wife nameed Miryea (Madeline Stowe). After a series of steamy intimate encounters between Cochran and Miryea, Menedez discovers their treachery and uses his powerful connections to take matters into his own hands. But wait -- there's more vengeance to be had. Cochran retaliates in the name of true love with his own brand of justice.

It's unlikely that 'Revenge' will ever legitimately be called a classic -- it has never really resonated much in Hollywood or in cinematic fandom. Critics loathed it, 'Top Gun' junkies walked away shaking their heads, and hardcore Scott fans became the only major driving force behind its small following. In fact, a quick hop online made it clear that Quentin Tarantino is one of the only notable voices calling the film something other than a gratuitous exercise in audience manipulation. On every piece of advertising (and the box cover itself), Tarantino declares 'Revenge' to be "Tony Scott's masterpiece" -- problem is, the film is anything but. Shooting a trite and flashy exploration of sex and violence doesn't mean a filmmaker is tapping into something authentically human. Quite the opposite, 'Revenge' pushes every scene to its extreme solely to titillate, but never to engage an audience beyond their basest impulses.

A lot of critics and moviegoers had a hard time feeling for Costner's Cochran -- especially when his wandering eye and unzipped pants seem to make Quinn's Mendez the real victim in the whole scenario. Of all the vengeance, it's the old man's that seems the most justified. Yet somehow, Scott expects the audience to side with the charming wiles of Costner and root for him instead. The performances and script don't help matters, either -- Costner is in pure one-note territory, while Quinn seems lost in a film that takes its subject matter more seriously. To her credit, Stowe is the only one on screen taking real risks. Her overt and explicit sexuality was a shock to say the least, but tonally felt removed from her character's situation. In fact, none of the characters are consistent in their attitudes, personalities, and behavior and the script is full of holes and backtracked motivations.

This Blu-ray edition of 'Revenge' is an unrated, director's cut of the original film. The length of the film is actually shorter than the theatrical cut by more than twenty minutes, but there aren't any groundbreaking changes to the story -- it's simply that the sex is more graphic, the violence is more gruesome, and the characters are given a few extra dialogue scenes with which to reveal their motivations. The scenes that were cut were repetitive scenes that Scott explains away as "unneccesary." As was the case with the recently released extended version of 'Donnie Brasco,' fans will likely be hard pressed to identify most of the changes and this new cut probably won't affect anyone's opinion of the film.

All in all, 'Revenge' is only worth watching if you're a diehard Tony Scott fan. You may get a kick out of looking at this early stepping stone toward his current visual style. You might even have a fun time with the ludicrous ultra-violence that splatters across the screen on a regular basis. But more general film fans (particuarly those who buy into all the things Tarantino promises in his comments concerning the movie) are more likely to be disappointed by this heavy, unlikely romp through the underbelly of action flicks. 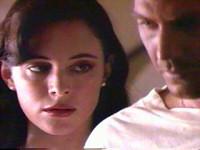 Presented in 1080p using the AVC MPEG-4 codec, 'Revenge' excels for the most part, in terms of picture quality. Black levels are solid, colors are vibrant, and skintones are warm and natural. Fine object detail is surprisingly sharp, refining the image with impressive clarity and dimension. Hair, skin texture, clothing, and even the tiniest lettering on Costner's flight helmet are well defined and hold up during fast movement in long shots. Blood seems wet and realistic, gravel and dust is particuarly noteworthy, and I could count the twigs on the desert underbrush. For a film that's over fifteen years old, the transfer looks crisp and lacks the muddiness of older catalogue title transfers. Contrast, while stark and overblown at times due to Scott's distinctive visual style, is technically proficient and gives the picture a welcome amount of depth.

The largest drawback to the transfer is that bouts of various types of source noise pop up throughout the film. A heavy grain clutters high contrast shots, noise crowds the dark corners of nighttime scenes, and slight color banding steps across the bright sky on more than one occasion. Less bothersome are a handful of shots that appear softer than others, a few instances when the vivid palette grows unintentionally murky, and times when warm tones are sporadically and inadvertently oversaturated. Fans of the film will be delighted to discover that 'Revenge' looks great -- but they'll be disappointed to see that it could look even better. 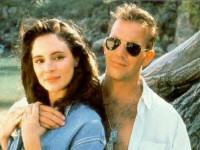 'Revenge' features an amateurish Dolby Digital 5.1 surround track (640kbps) and a truly wonderful uncompressed PCM 5.1 mix (4.6 Mbps). I've never reviewed a disc with two tracks that were so startlingly different -- dialogue on the Dolby track sounds terribly hollow, treble ranges ring and echo in some instances, and explosions and gunfire sound like bottle rockets and cap guns. On the flipside, the PCM track was richer, fuller, and defined sound effects much more clearly in its well prioritized soundfield. If I were grading the two mixes separately, it would be a full two star difference. As it stands, I'll stick to reviewing the PCM track for the remainder of this section.

The dynamic range is top notch, bass tones rumble across multiple channels, and the soundscape is populated with realistic ambiance that allowed me to easily immerse myself in the auditory experience. Dialogue is crisp and spread across the soundfield, never wavering or finding itself buried under heavy sound design. The subwoofer gets a complete workout from beginning to end and always has a nice, rounded boom to all of its sounds. Room acoustics are also important here and it's clear that a good deal of work went into reproducing the smallest details in the soundfield.

There are a few minor problems. Channel movement is a bit stocky -- sounds are exaggerated and tend to hop from one speaker to the next in busy scenes. Inconsistent air noise levels occasionally spike, the music is slightly louder than it should be compared to the rest of the mix, and punches often land with a wet "splatch" rather than a dull "whoomp."

First up is a dry but informative commentary with director Tony Scott. I was grateful that he was interested in talking about his intentions, character development, and directorial decisions. At the same time, I have to admit to having a hard time listening to the track in one sitting -- Scott's voice is literally soothing and I sometimes found it difficult to latch onto what he was saying without my mind wandering. However, those who can listen without growing sleepy will find a wealth of details and a welcome honest evaluation of what worked and what didn't, as well as some discussion of what audiences responded to and what they rejected.

The only other feature is a 15 minute, widescreen featurette called "Obsession: The Sex and Violence of Revenge." I'd actually recommend this supplement to anyone who hasn't seen the film before because it allows Scott and the actors to lay out the specific reasons behind the direction of the tone and content. This featurette increased my patience with the film because I at least knew Scott had precise purposes for everything that happened on screen.

In the end, 'Revenge' probably isn't worth your time unless you're a Tony Scott fanatic, a big fan of mindless violence, or a nut for entertaining crap with lots of gunfire and 'splosions. But setting aside the film itself and the thin supplemental package, this Blu-ray release of 'Revenge' does deliver on the bottom line, showcasing a great picture quality for its age and a superior PCM sound mix that puts the regular Dolby track to shame.

Sale Price 13.66
List Price 19.99
Buy Now
3rd Party 6.45
In Stock.
See what people are saying about this story or others
See Comments in Forum
Previous Next
Pre-Orders
Tomorrow's latest releases