Shazam! is a heartwarmingly hilarious superhero entry to the DC Extended Universe, sure to have everyone in the family cheering and believing in themselves. The movie debuts on Blu-ray with a reference-quality video and a demo-worthy Dolby Atmos mix, but a small set of supplements. Highly Recommended.

You can read our full thoughts on Shazam! in our review of the 4K Ultra HD Blu-ray HERE. 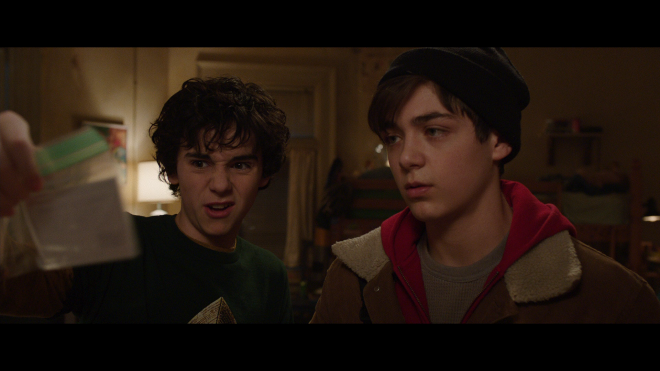 Warner Home Video brings Shazam! to Blu-ray as a two-disc combo pack with a flyer code for a Digital Copy. The Region Free, BD50 disc sits opposite a DVD-9 copy inside a blue, eco-cutout case with a glossy slipcover. After a couple of skippable promos, the screen changes to a generic static menu with options along the bottom and music.

The latest DCEU installment debuts on Blu-ray with an exceptional 1080p/AVC MPEG-4 encode that flaunts and flexes its superpowers in practically every scene.

Coming directly from a digital source, the presentation is consistently razor-sharp, even during some of the darkest, dingiest segments. Viewers can make out every crevice, pockmark and imperfection in the architecture to Rock of Eternity temple and various houses. In fact, the smallest feature and outline in the streets and buildings of Philadelphia are very well-defined, and every object decorating the Vasquez foster home is plainly visible in the background. The individual hairs of the perfectly combed hairdos and the stitching in the clothes, jackets and Freddy's knit cap are very distinct. But most impressive of all is the highly-detailed textured threading in Shazam's costume, and even the CGI monsters are elaborate and exact.

Presented in a 2.40:1 aspect ratio, the freshly-minted digital transfer also crashes into home theaters with a lightly subdued contrast, which is faithful to Maxime Alexandre's photography and meant to capture Philly's downcast winter atmosphere. Notwithstanding, the video displays clean, pitch-perfect whites throughout, and spot-on, brilliantly crisp highlights provide the electrifying action with eye-catching, energetic pizzazz and excellent visibility of the tiny details. Awash in rich, true blacks, the image shows excellent gradational detailing within the darkest shadows while also giving it a beautiful cinematic appeal. The stylized cinematography comes with sumptuously lush primaries, especially the blues of Freddy's clothes and the many variations of reds surrounding Billy and Shazam. Secondary hues are equally captivating, particularly the warm, orangey glow of the foster home and Shazam yellow lightning bolt.

Speaking of, a smidge, near-negligible banding can be seen around the glow of said lightning bolt, keeping the transfer just shy of perfection. Nevertheless, the overall quality is super! (Video Rating: 98/100)

Shazam! also shares the magical superpowers of a demo-worthy Dolby Atmos soundtrack with the day-and-date Ultra HD release. For a more in-depth take on the audio quality, you can read our review of the 4K Ultra HD HERE. (Dolby Atmos Audio Rating: 94/100)

One of the most unlikely yet established superheroes of the DC universe is also one of the more surprisingly entertaining and heartwarmingly funny entries in the DC Extended Universe. From horror director David F. Sandberg, Shazam! is an absolute hoot for the whole family with the promise of better things to come for the cinematic shared universe. The superhero magically appears on Blu-ray with excellent audio and video presentations and, despite featuring a small set of supplements, the overall package comes Highly Recommended to those who haven't yet upgraded to 4K.

Sale Price 9.96
List Price 18.94
Buy Now
3rd Party 5.91
In Stock.
See what people are saying about this story or others
See Comments in Forum
Previous Next
Pre-Orders
Tomorrow's latest releases