Nancy Drew and the Hidden Staircase

Sadly, unless home video sales have an unexpected boost, Nancy Drew and the Hidden Staircase is probably a “one and done” attempt at reviving the long-beloved character. That’s a bit of a shame, since I liked most of the casting choices made here. The problem though is that the movie needed to develop its screenplay more before going in front of the cameras. It’s a rather flat family movie, but there are a few bright moments worth seeing, and families need not worry about any material that might be inappropriate for their youngsters. With a strong video presentation, solid audio, and a few extra worth watching, this release is still one you (and your kids) will want to see first before deciding if it’s something you’d ever want to re-watch. Give It a Rent. 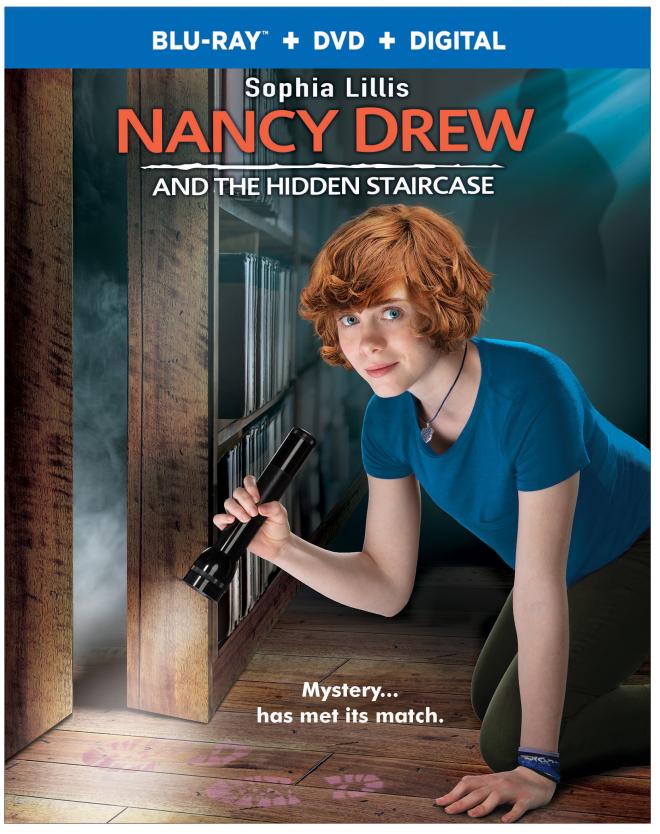 It’s fair to say that I’m not the target audience for Nancy Drew and the Hidden Staircase, but I’m not a complete novice when it comes to the character, either. Granted, growing up, I was more into The Hardy Boys, but I was also a fan of the late 70s TV series that combined the two franchises, with a pre-Dynasty Pamela Sue Martin playing the teenage sleuth. This, of course, is just one example of Hollywood’s numerous attempts to revive the character. So while loyal fans of the books may not like the fact that this Ellen DeGeneres executive produced movie tries to update the character to the modern world, let’s not pretend that it hasn’t been tried before.

Amy Adams lookalike Sophia Lillis takes on the title character here, and she’s good casting, as she’s a young actor who generally has a very naturalistic style. While the same can’t be said about her young co-stars here (Zoe Renee as Georgia “George” Fayne, Mackenzie Graham as Bess Marvin), Lillis does most of the “heavy lifting” when it comes to the plot, so the inexperience of Renee and Graham as actors doesn’t hurt the presentation too much. Thirty-something actress Laura Wiggins has been cast here to play “mean” girl and fellow high school student Helen Corning, and while it’s obvious she’s much older than Lillis, she’s got a lot to do in the story, so that probably explains why they cast someone with a little more on-screen experience for the role.

The movie is titled after the second book in the Nancy Drew series, but the plot has almost entirely changed. Here, Nancy and her father, Carson (Sam Trammell) have recently moved from Chicago to the small town of River Heights. Our first exposure to Nancy (after an opening credits montage that establishes her as an avid skateboarder) involves her friend, Mackenzie being bullied at school by jock Derek (Evan Castelloe). The girls plot revenge by doing some bullying of their own, which results in Nancy being sent to the local police station, where the sheriff (Jay DeVon Johnson) sentences her to a summer of community service.

Although the movie runs just short of 90 minutes, it takes a good half hour before the main plot kicks in. Nancy meets Flora (Linda Lavin), an elderly woman who believes her house is haunted. Getting permission from her father to do some detective work, Nancy and Helen stay over at Flora’s place, and sure enough some seemingly paranormal events take place, including a run-in with a pig-faced ghost (this bit may frighten the youngest of viewers, although teens will find it — and the other spooky events in this movie — rather tame). The rest of the film has Nancy trying to figure out who is haunting Flora’s place, which eventually includes her own father being abducted and Nancy and her friends having to save him.

Although made by Warner Bros., Nancy Drew and the Hidden Staircase looks and feels more like something made for The Disney Channel. It looks to be a fairly low-budget production and “plays” more like a made-for-TV movie than a theatrical film (indeed, Warners gave the movie a very limited theatrical release in mid-March and now is rushing it to home video where most will be finding out about it for the first time). While the movie is rather by-the-numbers, predictable, and not all that engaging, Lillis as Drew does show some promise. The biggest problem here is that the screenplay is so uninspired that the actors aren’t given a whole lot to do. The best scenes are between Lillis and Trammell, and the movie could have used a whole lot more of the father/daughter relationship.

The best thing I can say about Nancy Drew and the Hidden Staircase is that it’s harmless family fare. Parents worried about content need not worry about showing this one to their children (again, keeping in mind that there may be some scary moments for the extremely young), and if watching this movie gets them to pick up a few of those old Nancy Drew novels to read, so much the better.

The mystery of Nancy Drew and the Hidden Staircase unwraps on home video in a Blu-ray/DVD/Digital HD combo pack. The 25GB single-layer Blu-ray and dual-layer DVD come housed inside an eco-friendly Elite keepcase along with two inserts: one containing a code for a digital copy of the movie, and the other containing a code to take an online survey about the film. A slipcover with artwork matching that of the keepcase slides overtop. The Blu-ray is front-loaded with trailers for Alex & Me and The Lego Movie 2, along with an ad for 4K Ultra HD titles from Warner Bros. 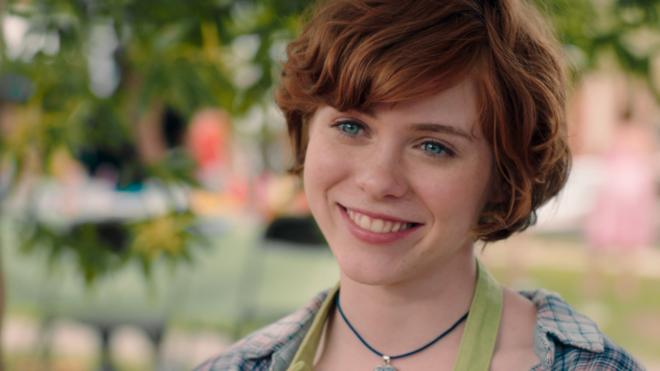 Nancy Drew and the Hidden Staircase was shot digitally and is presented on home video in the 1.78:1 format. Despite some very mild shimmering/aliasing that can be seen in the background of several scenes, the transfer here is surprisingly good, showing both some high-def “pop” and bright, lush colors. Skin tones are natural looking throughout, and even the dark scenes that take place in the spooky house have decent black levels and don’t suffer from excessive noise. Although the movie itself maintains a very “made for television” kind of look, I have to admit this transfer is very good and the depth and clarity in most shots add to one’s enjoyment of the film.

The featured English track here is in 5.1 DTS-HD Master Audio, and it’s a rather unspectacular presentation, although that has more to do with what’s happening in the movie itself than any real problems with the audio. Dialogue is crisp and intelligible throughout, and for the most part front and center. The surrounds are primarily used to amp up the movie’s music soundtrack, although it’s also used for some of the paranormal events that take place in the film, like when the haunted house’s electricity fails, causing sparks to go off everywhere (and thus, all around the home viewer). So while this won’t be a track you use to show off your home theater audio capabilities, it’s a solid presentation, with no glitches or issues to report.

In addition to the lossless English 5.1 track, 5.1 Dolby Digital tracks are available in Spanish and French. Subtitles are an option in English SDH, French, Spanish (Latin), Danish, Finnish, and Norwegian. 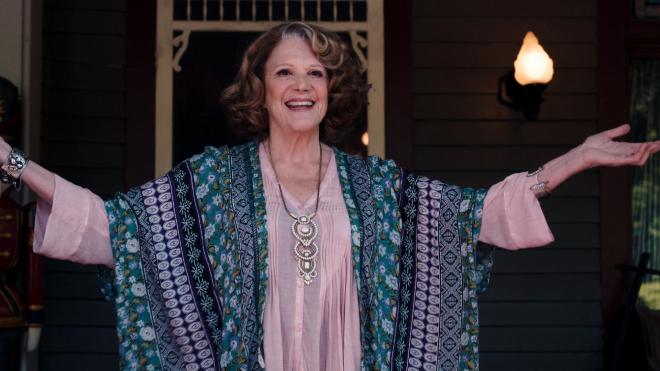 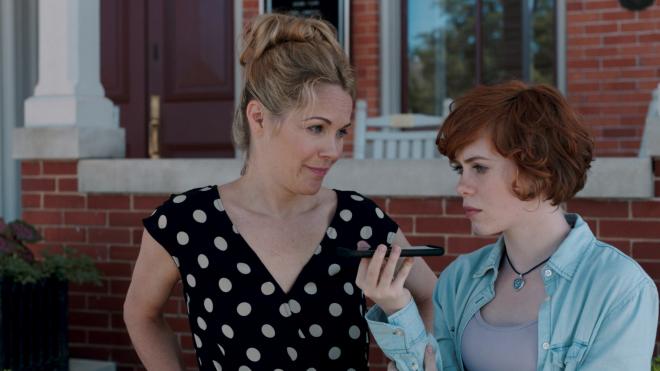 Sadly, unless home video sales have an unexpected boost, Nancy Drew and the Hidden Staircase is probably a “one and done” attempt at reviving the long-beloved character. That’s a bit of a shame, since I liked most of the casting choices made here. The problem though is that the movie needed to develop its screenplay more before going in front of the cameras. It’s a rather flat family movie, but there are a few bright moments worth seeing, and families need not worry about any material that might be inappropriate for their youngsters. With a strong video presentation, solid audio, and a few extra worth watching, this release is still one you (and your kids) will want to see first before deciding if it’s something you’d ever want to re-watch. Give It a Rent.