Rian Johnson takes Film Noir to high school with his indie breakout Brick. Joseph Gordon-Levitt is the quintessential high school loner on the case to learn what happened to his ex-girlfriend by delving into the criminal underground of his school. Brick was a big deal when it hit in 2005 and thankfully the film holds up. It shows it's first-time-filmmaker rough edges, but the show is still engaging and most importantly - entertaining. Kino Lorber Studio Classics delivers a first-rate Blu-ray release featuring a newly restored 4K transfer, solid audio, and a host of worthwhile bonus features. Recommended.

Brenden (Joseph Gordon-Levitt) is just like any loner high schooler his age - he wants to be left alone and yet is constantly compelled to interject himself into the business of others. When his ex-girlfriend calls him out of the blue in a panic looking for help, Brenden is forced to do the right thing by trying to find her when she turns up missing. Through a cadre of colorful characters, Brenden puts himself in the sights of The Pin (Lukas Haas) - a young criminal overlord who is more than willing to do whatever it takes to protect his thriving little empire. 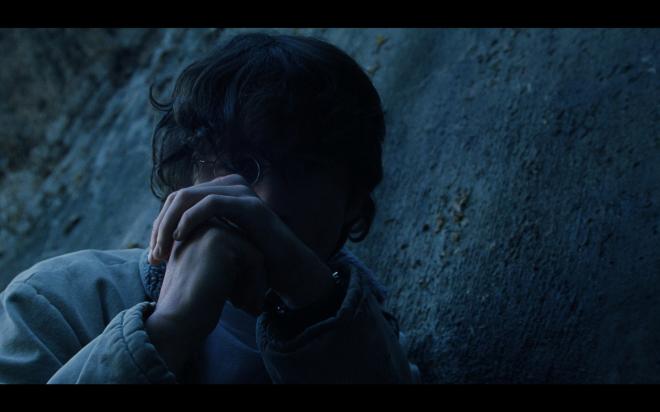 When I moved to Chicago for film school in 2005, Rian Johnson's Brick was the talk of the campus. It was a prime example of what you could do with a committed crew, a decent budget, and the will to get it done. While technically a professional shoot, the film rarely could get permission to shoot at various locations, so it was largely shot illegally without location permits - hence all of the scenes taking place behind buildings or in nondescript locations. In school, we were largely given permission to go ahead and do the same thing. Aside from not being able to shoot the Bean or in front of major landmarks, we didn't have to have location permits. I shot a short about Cookie Monster busting an illegal cookie dough operation using Chicago alleyways and my friends' really creepy laundry room in the dead of winter. By your shirtsleeves is a really fun creative way to go out and do it.

While Brick was made for a much larger budget with far better equipment and caliber of actor that exceeded those available to me, it maintains that rough around the edges feel that adds to the charm. It's a High School Noir thriller that never actually goes to school. It's about the dark underbelly of suburban Los Angeles/Orange County and yet it doesn't actually feel like it's a part of those communities at all. It's a movie that takes place within its own little world, and if you can accept how this world exists filled with world-weary youngsters and virtually no adult presence, it works! If you know the tried and true Film Noir structure you can diagnose the characters right down to the informant, the femme fatal, the hooker with a heart of gold and so forth.

It's been a solid 12 years since I last sat down and gave Brick a thorough watch. I'm glad to see that it largely holds up. Removed from my school years, some of the charms of a high schooler detective taking on a case has lost a little of its luster, but it's still an engaging and entertaining watch. The great cast of young up and coming actors and actresses is what makes this film work. Gordon-Levitt brings charisma to Brenden. Lukas Haas gets to play heavy as The Pin. Matt O'Leary gets to play the know-it-all street man with the inside dope. It's a fun film. I wouldn't try to stack it against the best of the best Film Noirs, but for a first time feature, this is a fun run for sure.

Brick makes it's Blu-ray debut thanks to Kino Lorber Studio Classics in a single disc release. Pressed on a Region A BD-50 disc, the disc is housed in a standard case. The disc loads directly to a static image main menu with traditional navigation options.

Sourced from a fresh new 4K restoration, Brick enjoys a solid 1080p 1.85:1 transfer. Giving its low budget and the footloose and fancy-free shooting, there are some age-related issues that remain - mostly in the form of mild speckling. While this isn't quite newly minted feature film pristine, it's still damn good looking. The film always had a cool-blue vibe to it and that's replicated here. That twilight shadow blue permeates throughout the movie as the dominant color but thankfully primaries and flesh tones remain active and healthy. Details are terrific giving the image some heft when the film moves from some of the more sparse locations to open streets or inside some ornate mansions. Black levels are overall solid giving deep inky black with great shadows - although there are a couple of instances where crush almost sneaks in and robs the image of depth. Aside from a couple of tiny nitpicks this is a great looking feature.

When it comes to the audio package for Brick it's dealer's choice. You can choose between a splendid and open sounding DTS-HD MA 5.1 mix or a strong and sturdy DTS-HD MA 2.0 stereo track. Both are uniformly excellent so you can't go wrong. Personally I'll tip my hat towards the 5.1 track only because the active surrounds give the imaging of the soundscape some breathing room - especially for any outdoor location. The mix isn't action-heavy or dynamic in an action movie way so that activity is largely saved for adding subtleties to the various locations. Dialog is crisp and clear throughout, scoring by Nathan Johnson is great and adds some moody atmosphere.

Kino Lorber Studio Classics brought over all of the previously available supplemental materials for this release. It'd been awesome to see a cast and crew retrospective or some new interviews, but this is still a decent package worth picking through.

Brick was a breakout indie darling when it hit in 2005. It established Rian Johnson as a solid director capable of crafting intricate character stories with a nice mystery backdrop updating old tropes and introducing them to a new generation. While Johnson is capable with mega-franchise blockbusters, 2019's Knives Out shows he's at his best with a tight cast, smaller production, and a nice mystery to plunge into. Brick was a great way to revisit Johnson's earliest feature film that very nicely holds up fifteen years later.

Kino Lorber Studio Classics finally brings Brick to Blu-ray in the U.S. with a splendid disc featuring a newly restored transfer, two solid audio tracks to choose from, and ports over all of the previously available bonus features. If you want to play high school film noir, Rian Johnson's Brick is a fun ride. Recommended.