When a colony transport ship to Mars is irreversibly pulled off course into the depths of space, those on the vessel Aniara must find a way to survive, maintain their humanity, and find a reason for hope. Aniara is not your rousing inspirational film about the exploration of space. Instead, it's a grim fascinating tour of humanity and the dissolution of societal structures when the end is near. Not for everyone, but an incredibly well-executed piece of science fiction. Magnet brings Aniara to Blu-ray in a single disc release with a solid A/V presentation and a couple of worthwhile bonus features. Highly Recommended.

Earth is spent. Without an ozone layer, rising sea levels, depleted freshwater supply, and any number of mass-scale horrors - people are abandoning the blue world for its red neighbor - Mars. Aboard the colony ship, Aniara people can find any number of luxurious amenities from shopping and entertainment to the hallucinogenic Mima - which projects images of peaceful lush landscapes directly into the subject's brain. All for a simple routine 2-week journey. The operator Mimaroben (Emelie Jonsson) becomes integral to the spirit of the colonists aboard Aniara when space debris irreversibly throws the ship off course into the void of space. Captain Chefone (Arvin Kananian) becomes the default leader of this new society desperately trying to keep hope for rescue alive as people begin to worship the Mima and the solace it provides. 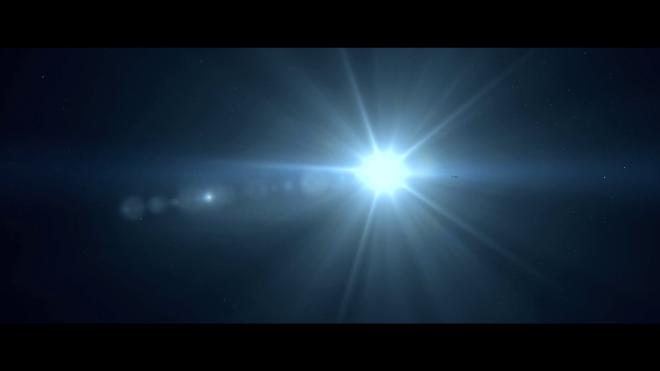 I fall in the camp that there are two types of space-focused science fiction films - the uplifting scale of human accomplishment with shows like Star Trek or the deep despair of facing an eternal black abyss with no end. Aniara most certainly falls into the latter camp. The Greek origin of the name is a clue unto itself meaning "sadness" or "despair." This is not a pleasant film. It's not something you're going to walk away from feeling inspired or better about the human condition - at least for most of the film. While absolutely falling into the genre of science fiction, the film isn't distracted by aliens or warp drives, instead, it takes a hard look at humanity's obsession with comfort and objects to make us feel good. What happens when these things are taken away from us? Do we have a basic drive to always improve ourselves and solve problems or are we naturally apt to live frivolously when the opportunity presents itself?

Based on the 1956 Swedish poem from Harry Martinson, directors Pella Kågerman and Hugo Lija do an amiable job battling the themes presented within this stark and bleak story while also infusing enough of that natural human drive that refuses to give up on hope - even when the reality is as black as the infinity of space. I'm once again in a precarious position of loving a film and wanting to discuss details but do not want to give up any story spoilers. While the film deviates from the original poem in certain respects, it does maintain enough of the thematic elements to keep the film on target. As the years tick by its fascinating to see how this little pocket of civilization finds new ways to reorganize, reshape, and continue to exist. And true the film explores the bleak vastness of space exploration where there could well be nothing out there - but at the same time, it finds a way to highlight man's drive and scientific accomplishments.

Through the ride, Emelie Jonsson, Arvin Kananian, Bianca Cruzeiro, and Anneli Martini all deliver exceptional performances. Given the situation, there is an authenticity to the show that is impossible to resist. They're captivating characters who each go through their own processes of accepting and dealing with various situations that come up. Some are inspired to try and keep going, others are prone to despair and try as they might they just can't overcome the stark reality of the situation. Again, Aniara is not an overly pleasant film. You're probably going to want to counter-program it with something lighthearted and fun afterward, but it's a smart contemplative film that shouldn't be missed.

Aniara arrives on Blu-ray in a single disc set courtesy of Magnet / Magnolia. Pressed on a BD-50 disc, the disc is housed in a standard sturdy snapping case. The disc loads to trailers for other Magnolia and Magnet film releases before arriving at an animated main menu with traditional navigation options. 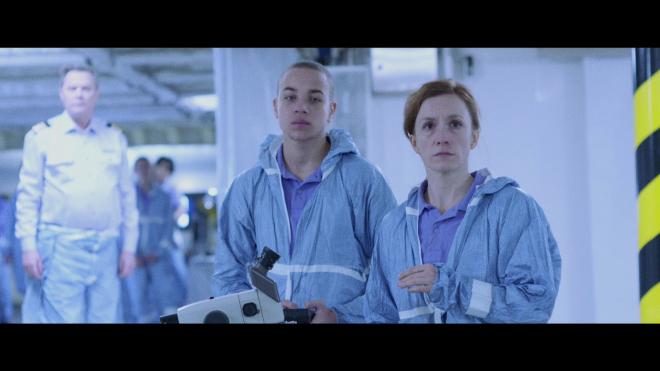 Unfortunately, I wasn't able to find any tech specs detailing the filming process of the film -- I'm guessing digital --regardless it's a beautiful 1080p 2.35:1 transfer. Details are often exceptional. The film gets around having to create massive amounts of visual effects by keeping settings looking real world as people try to maintain their creature comforts while also making sure the camera is almost always focused on people. This is isn't wild spectacle science fiction. The CGI that is used is decent enough, not quite what one would want to see in a huge budget film, but just enough to set the scene without looking like it's misplaced on the screen.

Clarity and details are strong but are also purposefully restrained as the film was made with a soft diffused look - close-ups and middle shots look the best. Clothing, production design, and facial features all have a strong presence. Colors shift throughout the film to address the thematic feeling of confinement. Slowly the lighting becomes more like a purple-ish blue as if everyone was living in an aquarium. Black levels are my only slight sticking point, as they don't quite 100% approach true black. There are moments where they get that deep inky sheen, but others pull back giving the image a slightly flattened feel. Most of the time there is a terrific sense of depth and dimension - as well as the claustrophobia of such tiny living spaces. 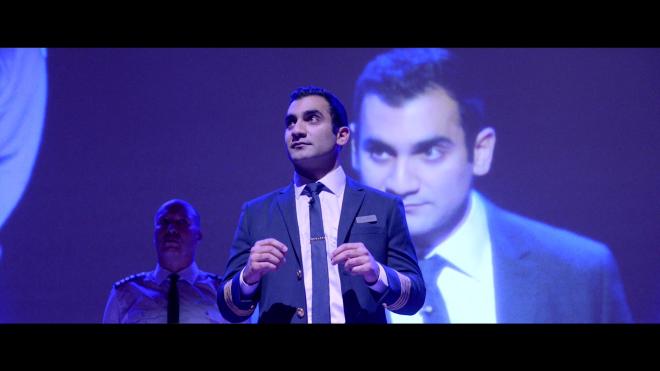 Aniara arrives with two audio tracks to choose from a native Swedish DTS-HD MA 5.1 mix as well as a surprisingly solid English dubbed DTS-HD MA 5.1 track. For my money, I'd choose the Swedish since it's the native language everyone speaks and feels a bit more natural, but if you're not keen on reading subtitles the English mix is quite good. I normally hate dubbed mixes since the voices often just don't match the person. Here it works so depending on your taste you're good to go.

Universally both tracks have an exceptional surround presence. There is a near-constant low hum like the sound of engines that carries everywhere anyone goes in the film. It's not quite dissonant enough to drive you nuts, but if you had to live with that sound it'd probably make you bonkers. Dialogue is crystal clear. The sound effects are smooth and effective giving the open spaces of the ship the feeling like people are living in a floating mall. Crowd scenes are the most lively with lots of voices and activity. But even in the quietest moments of people in their small cramped living spaces together offers enough distinct audio effects to keep surround channels engaged. The Alexander Berg score is particularly effective and I wish I could locate a copy. 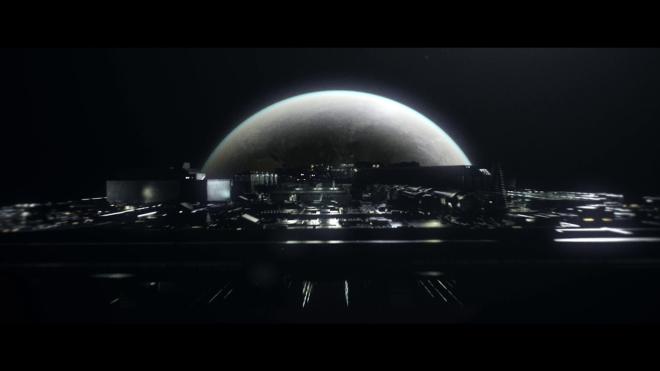 Sadly bonus features are a bit of a drop off here. While the three mini behind the scenes sort of features are interesting, I would have loved to have seen more material about the making of the movie.

Aniara certainly isn't the most upbeat movie of the year. It's not one you're going to want to turn on to entertain a crowd of family or guests! That said, it's a must-see film. While steeped in despair there is a weird caveat of joy and optimism throughout, you just have to be willing to look for it. Faced with impossible odds and the absolute void of deep space, people continue to try and exist and find a solution to their problems… even when there likely isn't one.

Magnet / Magnolia delivers a solid Blu-ray presentation of Aniara with an often beautiful image and a somber effective audio mix. Bonus features while interesting aren't plentiful enough but they're worth looking at. Aniara may not be a true genre classic but it gets damn close and well worth giving it the time. Highly Recommended.