David Mamet moves from Pulitzer Award-winning playwright to feature filmmaker with House of Games. A Con-man thriller starring Lindsay Crouse as a struggling psychiatrist and Joe Mantegna as the cardsharp who seduces her. This is an all-dialogue sort of action thriller where a simple turn of phrase gives away a big tell in the plot. This is a slick potboiler that percolates right to the explosive end. The Criterion Collection delivers House of Games to Blu-ray with a new HD transfer and a crisp, clean audio mix along with a fine set of bonus features. If you're a Mamet fan, this isn't one to let slip past your radar. Highly Recommended.

Famed psychiatrist Margaret Ford (Lindsay Crouse) has everything. She's rich and a popular published author with a long string of clients. But she's in an existential rut as she struggles to believe that she's doing any good for her patients. Seeing the opportunity to clear a patient of a steep gamboling debt, she meets cardsharp Mike (Joe Mantegna) at the House of Games. Excited by his world of shot cons and sleight of hand, Margaret loses herself as she's caught up in a con-gone-wrong that leads the murder of the mark. 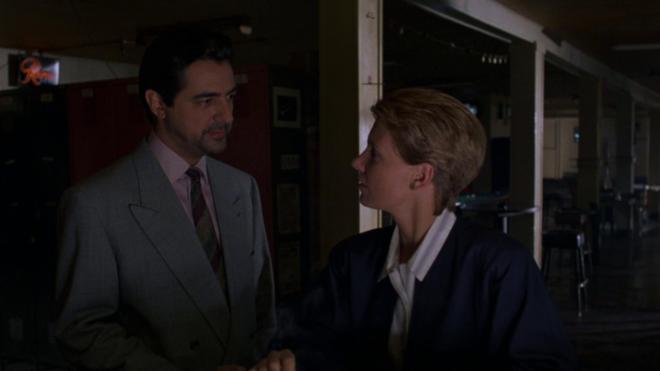 David Mamet has been such a prominent figure in film and television as a writer and a director for so long that it's almost difficult to remember a time without him. After the breakout Broadway success of Glengarry Glen Ross, Mamet was a hot Hollywood commodity. While well known for crackling dialogue and plots with a blistering pace, he's scored a few detractors for featuring often flat expressionless performances in his films. I had a pair of dueling screenwriting professors in school - one loved Mamet and the other hated his style. While it's easy to see that criticism in his films - Lindsay Crouse certainly would fall into that category in House of Games - it's important to point out those performances are purposeful.

Mamet's plays and screenplays are often loaded with swift dialogue and plots that turn on a dime. It's what makes his writing so great to read or why his films or plays are so impressive to see performed. But there's usually another element in his work that often goes overlooked - characters who struggle with the real world. Whenever you read criticism about emotionally flat "zombie" performances, you're actually reading about very specific characters. But they're written that way for a reason. In House of Games that character is Margaret Ford. Her emotional fragility and somewhat lifeless persona come from the fact that she's become a cold and clinical individual. She doesn't know how to interact or react to real people in a personal way. She doesn't connect to the real world anymore. She has more in common with an emotionally void dissociative patient who was abused by her father than anyone else in the movie.

Watch other Mamet regulars like Joe Mantegna, Mike Nussbaum, J.T. Walsh, or Ricky Jay, they're nowhere near as "emotionally flat" because they're real-world characters. They don't have a disconnect with the world they live in. Another prime example of this sort of Memet character is Val Kilmer's wayward Spec. Ops. ghost Scott in Spartan. He's stuck in a world he doesn't connect with the world around. This, among many other tropes, are on full display with House of Games.

I love Mamet thrillers because he does what so many other writers don't do - he lays everything out for you. There's almost never any actual mystery or real twist beyond him getting you to think there is. Like Mike and the rest of his crew, they lay everything out but get you to believe something else. It's a terrific writing trick. I won't spoil things for you but the whole movie ping-pongs back and forth within the dialogue. If you're watching, you can spot the tells and see the game before it's played. The best trick is when you think there's a game, but there isn't - making House of Games a sleek and deceptively simple thriller that will leave you breathless after 100-minutes of crackling dialogue and terrific performances.

House of Games slips and slides its way onto Blu-ray courtesy of The Criterion Collection in a single disc set. Housed in a standard clear case with spine number 399. The disc also comes with a booklet containing a terrific essay by Kent Jones that covers a lot of ground about the production and is well worth reading. The disc loads directly to a static-image main menu with Criterion's traditional navigation option. 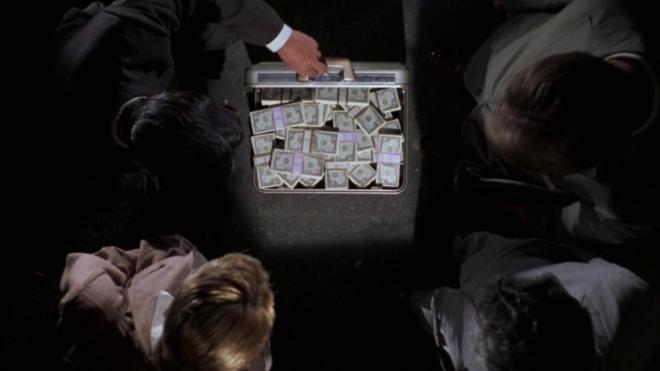 According to the booklet, this new HD transfer was struck from an original 35mm interpositive and supervised by Director of Photography Juan Ruiz Anchia. The results for this 1.78:1 1080p transfer are pretty damned impressive. The last time I saw this film was on the old MGM DVD and that was most of 10 years ago. I was struck by how much detail there was to see now. The film always had a hazy, dream-like quality to it as if you're entering and exiting a nightmare. That effect is well-replicated here. While there is a haziness, it never pulls away from fine facial features, clothing, or important details in the set design. Even when you're watching something innocuous there's always something happening so it's important to pay attention!

Colors are on point with healthy flesh tones, nice poppy primaries. Reds are especially bold. Black levels are deep and inky giving several scenes in the movie a nice film-noir appearance with nice solid blacks. Thankfully crush is never an issue. Contrast is also nicely balanced as there are several moments with bright whites or blinding lights coming through windows that avoid any serious blooming issues. According to the restoration notes, instances of dirt and debris have been cleaned up leaving a nice pristine image. Grain is apparent but never overly noisy giving the image a nice film-like appearance throughout. 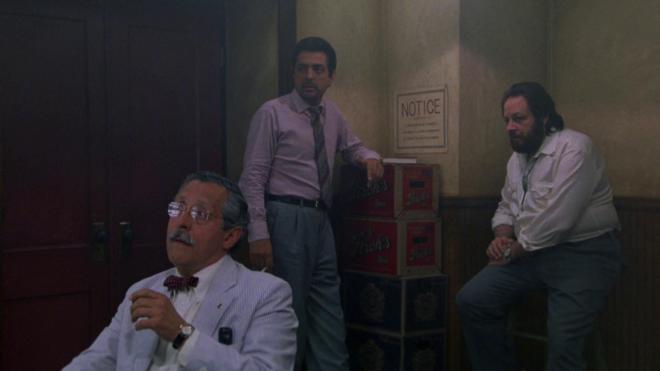 Criterion delivers House of Games is a cleaned up and solid LPCM 1.0 English Mono mix. The past times I saw this film I felt like the audio was muddy obscuring dialogue so it's really awesome to hear that the mix has been restored and cleaned up significantly. I remember my professor struggling to get the audio at a level where 30 students could hear the dialogue but not get hearing damage at the same time. This go around it was nice and even without any unnecessary level boosting. The dialogue is crystal clean and crackles. Sound effects are a bit restrained but naturalistic. Atmospherics may not give a lot of extra dimension, but since most of the movie takes place inside tight confined locations that extra sense of claustrophobia is welcome. Scoring is a bit restrained and only slips in and out to give some moments an extra punch where necessary. This really is a dialogue show without signs of hiss or age-related issues to interfere. 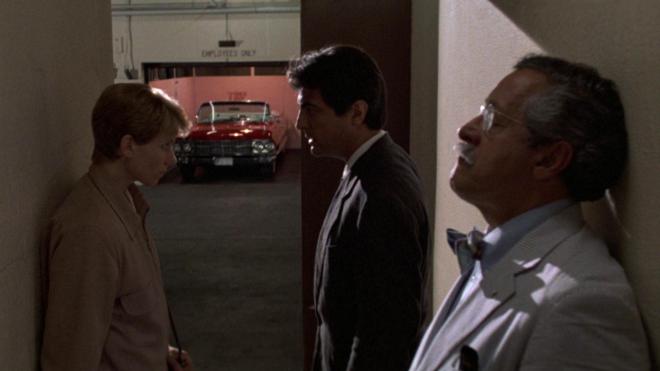 Like a true Criterion Collection release, House of Games doesn't come with a huge number of bonus features, but what's here is damn good material. The Audio Commentary with Mamet and Ricky Jay is great stuff. There are a few patches where they get lost talking about specifics unrelated to what's happening on the screen, but that's okay because they pack in a lot of cool info about the film. The cast interviews with Crouse and Mantegna are great with a lot of nice things to say about working with Mamet on several films and plays over the years. 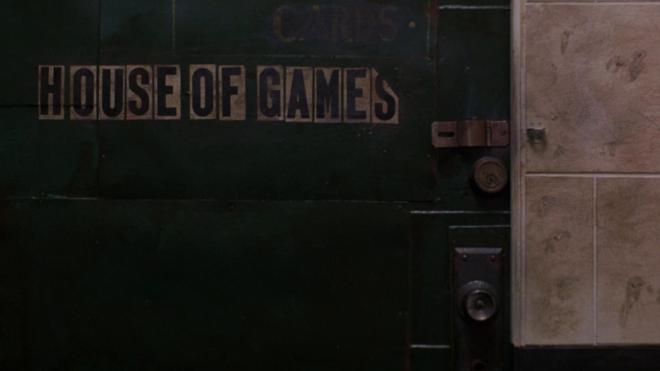 House of Games marks the first major motion picture David Mamet got to take complete control over as writer and director, often blending theatrical staging with crisp cinematic bravado. Depending on what you look for in a thriller you may get different mileage out of this one - but I think it's an excellent flick. It's swift, moves fast, forces you to pay attention, and then moves on without overstaying its welcome. A classy thriller from a master storyteller at the top of his game.

The Criterion Collection upgrades House of Games to Blu-ray with a fresh new HD restoration that leaves the image looking terrific with a nice clean audio mix to match. Bonus features may not be numerous, but they're robust and informative. Whether or not you dig David Mamet's style, this is a slick classy conman thriller that requires multiple viewings. Even if you keep ahead of the twists, you'll love rewatching specific scenes for the tells and giveaways. Highly Recommended

Sale Price 19.99
List Price 39.95
Buy Now
3rd Party 17.99
In Stock.
See what people are saying about this story or others
See Comments in Forum
Previous Next
Pre-Orders
Tomorrow's latest releases