Blaze is a fantastic film from Ethan Hawke about Texas singer/songwriter Blaze Foley. Instead of telling us the greatest hits of his life, Hawke and company go for a more intimate tale of Blaze's love interest and alcoholic downward spiral while showcasing the man's famous friends and undeniably good music. Shout! Factory delivers a great 1080p HD transfer, a solid DTS-HD MA 5.1 audio mix, and a couple of terrific bonus features. Highly Recommended! 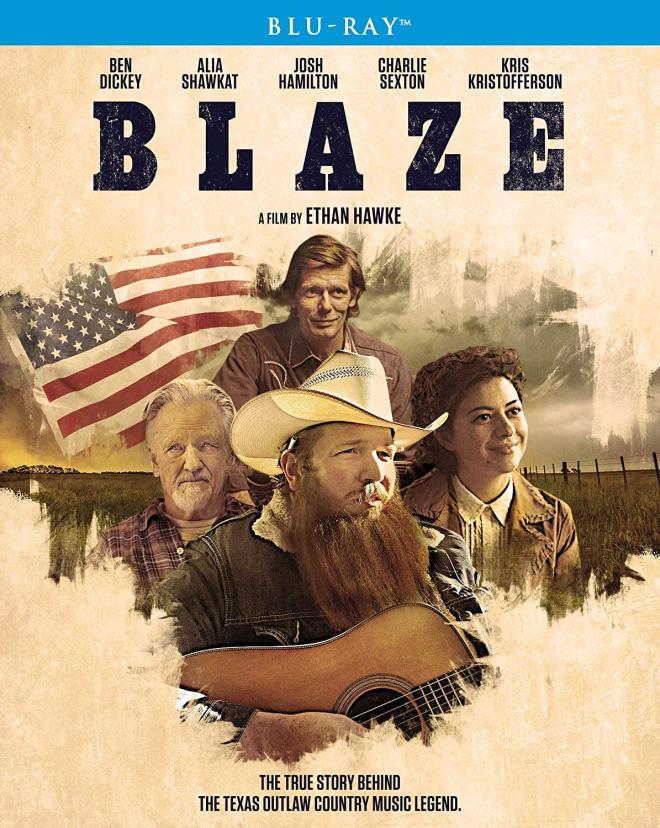 The life of Blaze Foley could have easily fit within the first season of Mike Judge's excellent documentary TV series, Tales From the Tour Bus, a show that details accounts of outlaw country singers, touring the country and all of their dangerous and criminal activities. Blaze Foley might have not been super famous, but he could stand next to the likes of Willie Nelson, Johnny Paycheck, Waylon Jennings, and even Townes Van Zandt, both on and off the stage. Blaze Foley even became close friends with Zandt over the course of his short life until Foley was killed in a bizarre series of events before turning 40.

Co-written and directed by Ethan Hawke, the story uses a radio interview about Blaze's life as a framing device, flashing back to moments in Blaze's life with Sybil Rosen (played by Alia Shawkat). The real Sybil Rosen co-wrote the screenplay with Hawke based on her memoir about her time with Blaze. Hawke and team introduce us to the burly singer in a very charismatic and wonderful way. I instantly fell in love with this guy, played by singer/songwriter Ben Dickey in his first on-screen role. His persona is infectious and you just want to hang out with him.

When he meets Sybil, their love is instant and they move to a hideaway treehouse in the middle of the woods. Ben and Alia's onscreen chemistry is excellent. Soon though, this paradise will end as they decide to leave their hideaway and head for Austin, TX to pursue Blaze's career. Despite creative some amazing music, Blaze becomes infatuated with the dive bar scene and succumbs to substance abuse.

Being born and raised in Texas, and with Austin being my home away from home, I learned about Blaze Foley at an early age and spent hours along Southbound 35 scouring record stores for his hard-to-find music. Blaze isn't the greatest hits of this once forgotten musician, but rather an intimate look through the eyes of those around him and how he affected them, for better or worse. In my opinion, Ethan Hawke and his collaborators did this man justice and tell a fantastic story at the same time. Those of you who don't know Blaze Foley should check this one out. And hopefully, you too will come to love this man and his music, warts and all.

Blaze comes with a 1080p HD Blu-ray Disc from Shout! Factory. There is no download code here. The disc is housed in a hard, blue plastic case with a cardboard sleeve. The cover art is reversible.

Blaze comes with a 1080p HD transfer and is presented in a 2.40:1 aspect ratio. This film was shot on the RED Epic Dragon and was highly stylized in post-production with specific color palettes and filters to tell the story in its different timelines. Much of the film has an amber or yellowish tint to it, specifically in flashback sequences. The scenes in the woods showcase some faint greens and browns along with some washed out blue jeans. There aren't many primary colors to brighten the screen, but it's all part of the intended style. And, when Blaze is playing this guitar and singing in dive bars, the palette changes to almost a strict red palette, mostly void of other bold colors.

Where detail is concerned, you'll be able to distinguish individual hairs in Blaze's bushy beard, leaves on trees, the freckles on Alia's face, and more textures in their denim clothing. In lower lit scenes, some detail is muddled and not sharp. Black levels are mostly deep and inky, and skin tones are more on the yellowish side of things. There are a few instances of noise and banding, but it's not a significant issue. Still, this stylistic portrait of the musician is worthy.

Blaze features a lossless DTS-HD MA 5.1 audio mix. When it comes to the music, the soundtrack soars, but other than that, it's fairly front heavy. The rear speakers and surrounds mostly pick up the audiences noises of bars and venues where Blaze performs. In addition to yells and chatter and clapping, you can hear glasses clanking together and footsteps. Blaze's guitar and voice are loud and robust and completely fill the room up as they should.

Other than that, it's a fairly soft audio mix that is located front and center. Dialogue is clear and mostly easy to follow along with Ben Dickey as Blaze is not mumbling his dialogue. Lastly, there are no pops, cracks, hiss, or shrills.

The bonus feature section features an excellent commentary track by Ethan Hawke and a short behind the scenes featurette with the cast talking about making the film.

Blaze is an excellent biopic about a musician you probably didn't know existed. Thanks to Ethan Hawke, Sybil Rosen, and their collaborators, you have a chance to know the brilliance, charm, and tragedy of Blaze Foley. Expertly made with great performances by real musicians, this is one film you don't want to miss. The video and audio presentations are both stylistically good and even though the bonus features are sparse, they are worth your time. Highly Recommended!

Sale Price 16.09
Buy Now
3rd Party 10.74
In Stock.
See what people are saying about this story or others
See Comments in Forum
Previous Next
Pre-Orders
Tomorrow's latest releases