His feet fly fast. His fists are furious. His comedic timing is hilarious! He's the one and only Jackie Chan in two of his best genre and career-defining films Police Story 1 & 2. The Criterion Collection gives these two edge-of-your-seat action-packed comedies the true collector's edition treatment they've long needed - and deserved - in North America. With excellent image transfers, terrific audio mixes, and an exhausting collection of bonus features - don't let this one pass you by! If you love action movies, if you love comedies, if you love both action movies and comedies - Police Story / Police Story 2 from the Criterion Collection is a Must Own set.

How the hell do you review classic Jackie Chan movies let alone two of them at the same time? I gave it my best shot with Twilight Time's release of Snake in the Eagle's Shadow / Drunken Master and truth be told that was a tough task. Jackie Chan films aren't like your average run-of-the-mill action flicks from the U.S. Chan is a talent unique unto himself. As a martial arts wizard, he's capable of pulling off some of the most impressively choreographed action sequences cameras have ever captured on film. As a comedic performer, he displays the impeccable physical comedy timing of Buster Keaton using the world around him as one big gigantic prop to play off of. 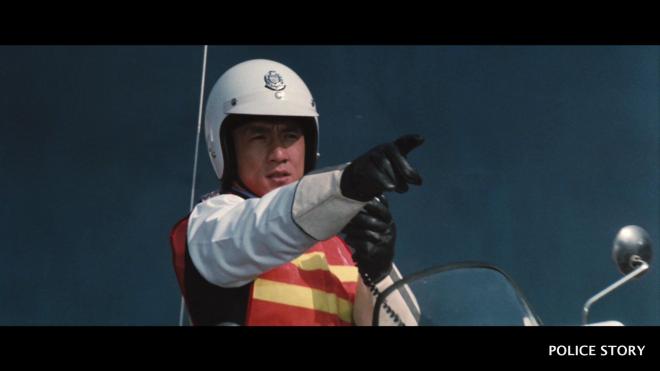 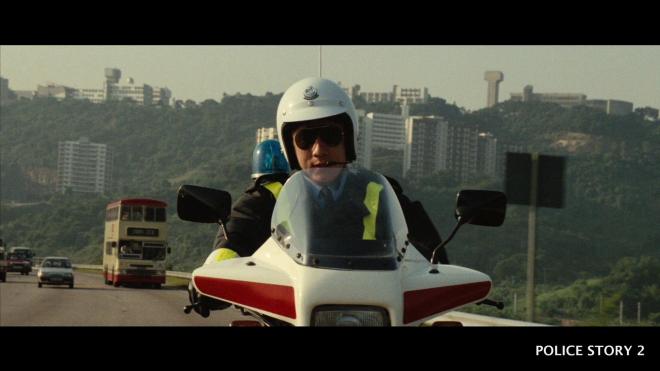 Now the trouble I had detailing Snake in the Eagle's Shadow / Drunken Master is only magnified by Criterion's release of Police Story / Police Story 2. It's easy to argue that these two films represent the very best of Jackie Chan not only as an action/comedy performer but as a director. While far from being his first films behind the camera (as well as in front), the level of confidence and sophistication is notable. In Police Story, Chan is Ka Kui Chan, a virtuous upright police officer who just made a big bust and he has to protect the only witness Selina Fong (Brigitte Lin) in a trial against a notorious crime boss. The only problem is that crime boss has set up Ka Kui as a dirty cop - so no he has to clear his name and save the day! Police Story 2, poor hapless Ka Kui is back on the beat being the best supercop he can be. He's patched things up with his girlfriend May (Maggie Cheung) and everything seems to be going perfectly - until everything starts blowing up. With a gang of bombers holding the city hostage for blackmail money, Ka Kui also has to deal with the pesky crime bosses he just got back behind bars!

Normally you could throw plot out the window for an average Jackie Chan picture. Really plot was just a thin excuse to see Jackie do his thing with an increasingly complex array of stunts and fight sequences. For Police Story / Police Story 2, the plot is an essential element of the action hijinks in a way that feels unique and organic to Chan's sensibilities. Ever the nice good guy, Chan perfectly plays the everyman who winds up in way over his head. Whether you're looking at the climatic mall fight from Police Story or the hilariously exciting playground fight in Police Story 2 - these films represent peak Jackie Chan excellence.

I wish I could put a definitive number on how many times I've seen these movies - but I honestly can't. Part of the problem was how these films were regularly recut, retitled, and bootlegged into different markets. My Dad used to rent this one tape I think was called Jackie Chan's Super Adventures or something like that and it was essentially Police Story and Police Story 2 cut together into a single feature without any care or sense of the plot. It was basically a highlight reel of his action sequences with really bad dubbing. But really, that's been the case for so damn many of Jackie Chan's early films that it's almost strange to see them in their true uncut form. I have so many disjointed memories of his films it's difficult to parse out when I saw what movie when - or if I've ever actually seen it at all!

Thankfully I eventually did get to see Police Story / Police Story 2 in their proper form - albeit with particularly craptacular English dubbing. It feels like each release gets a little bit better than the last. Now that we're here with the Criterion Collection, I dare say optimistically that we have the definitive releases of these two action comedy classics. If you're down for a true "American" experience you can pull up the silly English dubbing, or you can enjoy the proper Cantonese dialogue with English subtitles. Whichever way you chose to enjoy these films - you're guaranteed a breathlessly exciting good time! Here's hoping we get Criterion releases of Operation Condor, Rumble in the Bronx, and SuperCop next!

Police Story / Police Story 2 make their true proper North American Blu-ray debut in a two-disc set courtesy of the Criterion Collection. Pressed on two Region A-locked BD-50 discs, the discs are housed in digibook packaging with a slipcover and a foldout poster containing the essay "Law and Disorder" by Nick Pinkerton. This set has a dual spine number representing the two films #971 and #972 respectively. Each disc loads to their own unique static-image main menu featuring Criterion's standard menu structure. 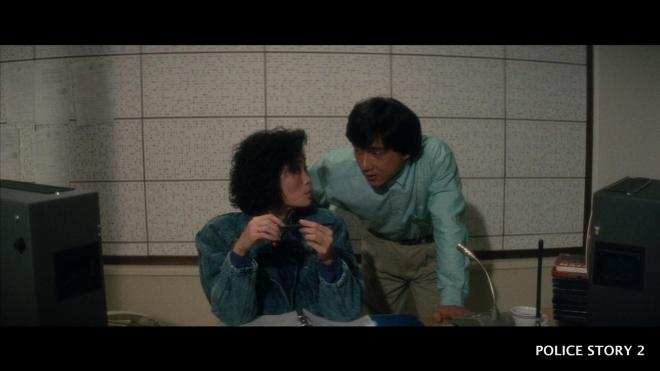 Police Story / Police Story 2 arrives with fresh 2.35:1 1080p transfers struck from new 4K restorations of the original camera negatives that are just so wonderfully odd to see. This may sound like a complaint but it's not! I grew up watching Bruce Lee, Sammo Hung, and Jackie Chan movies with the worst video quality imaginable. If the video wasn't completely dark it looked like it was shot through chicken soup. If they weren't dubbed with crappy translations, the English subtitles would be incomplete. I'm just not at all used or prepared to watch these movies looking this beautiful. And they are beautiful - but not completely faultless.

But first the good stuff. Across the board, these transfers display a terrific film-like image. Detail and definition have never looked better. While maybe not as polished or pristine for an American release from the same mid-80s era, this is jaw-droppingly clear. Details are robust allowing you take in all the finery from facial features to set design to 80s Hong Kong fashion stylings. Film grain is also retained and retains an appealing organic appearance without ever becoming too intrusive. They also don't appear to have been touched up by any DNR either.

I do have a couple of relatively small misgivings about these transfers. They're not serious knocks but I'm punching down a star just the same. The first issue is with colors. While the primaries look great with terrific reds, yellows, and bright pretty blues, skin tones just look way too dark at times. There are some sequences where everyone in the room looks like they baked in a tanning booth before cameras rolled. Secondly, black levels are a bit on the inconsistent side. They don't quite hit crush levels, but they get pretty close and there are a couple of fight sequences at night where it can be a little difficult to see what's happening if one of the random knuckleheads Chan is smashing up is wearing dark clothing. It isn't terrible. Everything is still visible thankfully, but it gets darn close to being a sore spot.

All in all, I'm still incredibly happy with the outcome of these transfers. Like I said at the outset I'm not used to seeing them look so incredible. Even though I've been through these movies more than a few times, during the big stunt sequences I felt like I was cleanly and clearly seeing each of the breathtaking moves for the first time! That's probably the best compliment I can give these transfers. You can see every punch, kick, slap, slide, leap, smash, and crash better than ever before! 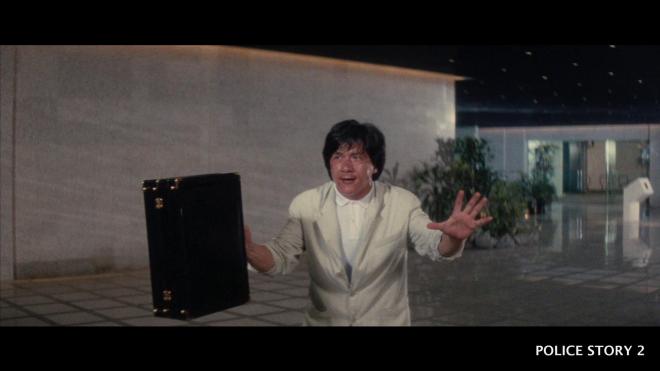 In another nice move on Criterion's part, they've gone the extra mile to include a trio of audio tracks for each film. Both films boast terrific clean and clear uncompressed LPCM Cantonese mono audio tracks. If you want something to kick your surround system into gear, you also get 5.1 DTS-HD MA Cantonese tracks as well. Between these two options, you really can't go wrong. It'll come down to user preferences. I personally preferred the mono tracks but was still very impressed with the 5.1 mixes. The Surround effects come at you from all side with an impressive array of audio effects to give you real bang for your buck.

Depending on how you were introduced to Police Story / Police Story 2, you also get to enjoy each film with a Dolby Digital English dubbed mix. Now I have to admit to loving this mix for how terrible it is and because it's how I first experienced the movies. The dubbing is bad and I've grown to love the true Cantonese audio for a "true" experience, but I'm always drawn back to the English dubbing for nostalgia sake. It's not as clean as the other two tracks, it doesn't have as much natural atmosphere, and the sound effects have a particular canned quality to them - but damn it all it's fun to hear! For a truly authentic experience, stick to either of the Cantonese audio mixes. For fun, the English dubbing works for what it is. 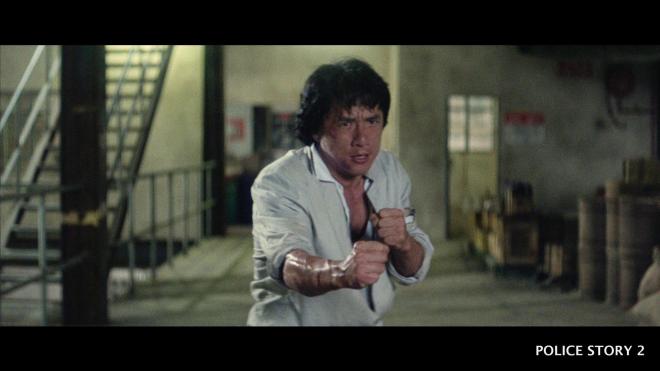 In keeping with their usual standards for excellence, the Criterion Collection delivers one hell of a lineup of bonus features for these two classics. You get a little bit of the old with the new here. You get some new interviews with Chan and mega-fan filmmaker Edgar Wright as well as a ton of archival behind the scenes material and interviews. I'm also including the alternate release cut of Police Story 2 in here because there are only some small differences and it isn't fully restored like the main films. It's cool to see it in an old-school warts-and-all presentation. In total, you've got several hours of bonus features goodness to soak up here!

The Criterion Collection couldn't have picked two better Jackie Chan movies to bring to Blu-ray with true special edition release. Police Story and Police Story 2 represent peak Jackie Chan when he really emerged as a tour de force as a producer, director, stunt choreographer, and mega action star all at the same time. Both movies are wildly hilarious with edge-of-your-seat action sequences that leave you breathless. Both films sport fresh new 4K restorations, three dynamic and effective audio mixes, and if that wasn't enough - you've got hours of bonus features to pick through. If you're a Jackie Chan fan Police Story / Police Story 2 is a Must Own.

Sale Price 32.87
List Price 49.95
Buy Now
3rd Party 27.24
In Stock.
See what people are saying about this story or others
See Comments in Forum
Previous Next
Pre-Orders
Tomorrow's latest releases